The Beerhunter: Brattleboro by the Glass 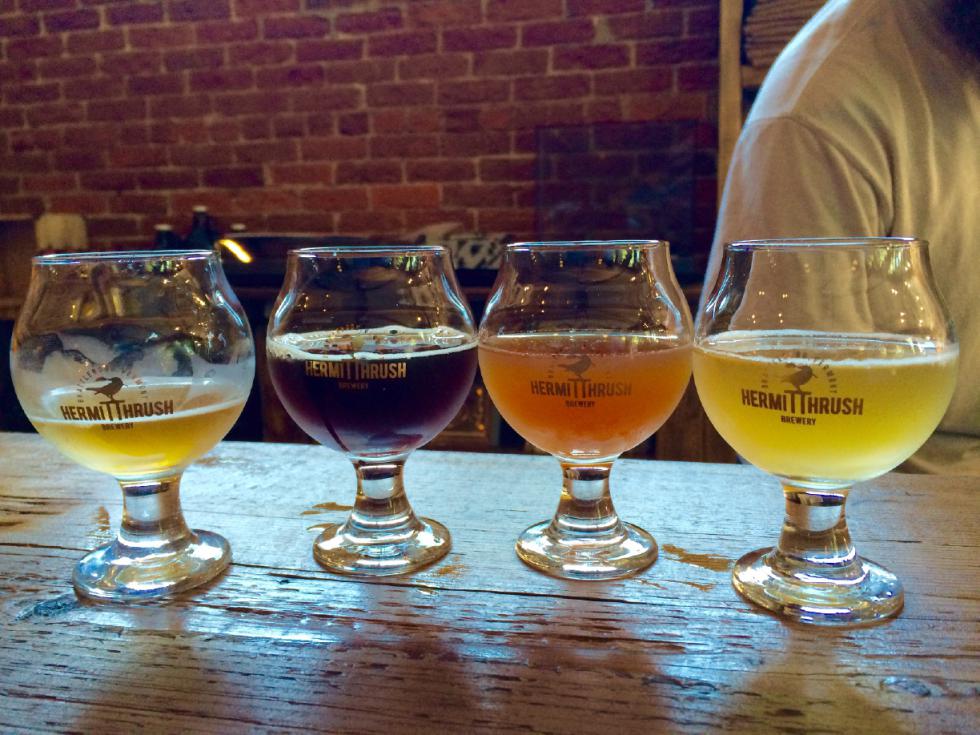 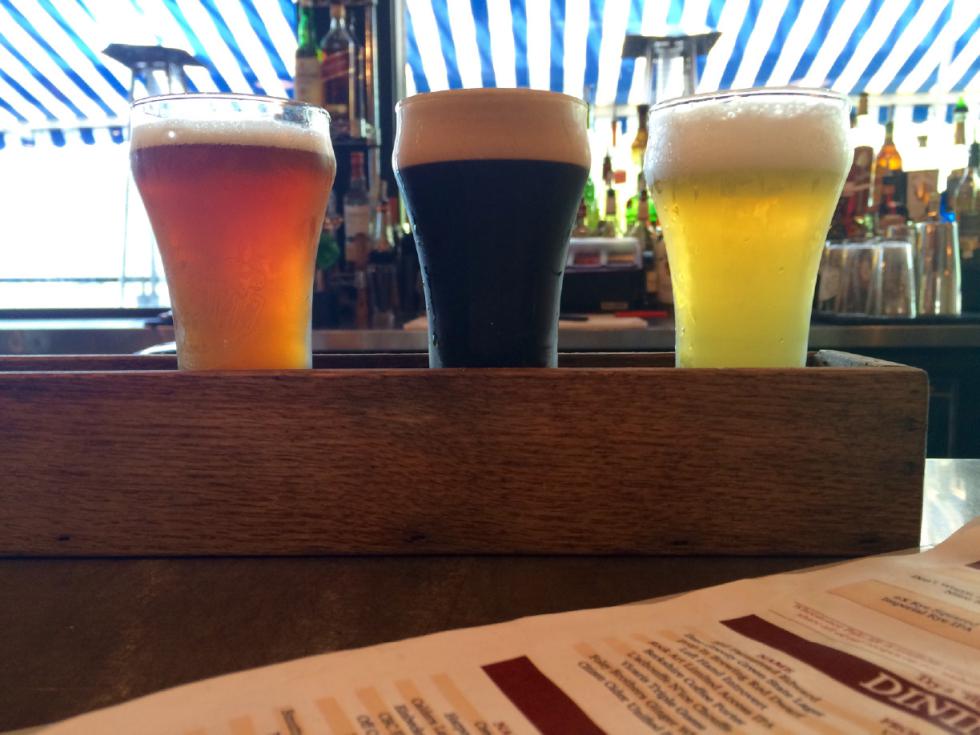 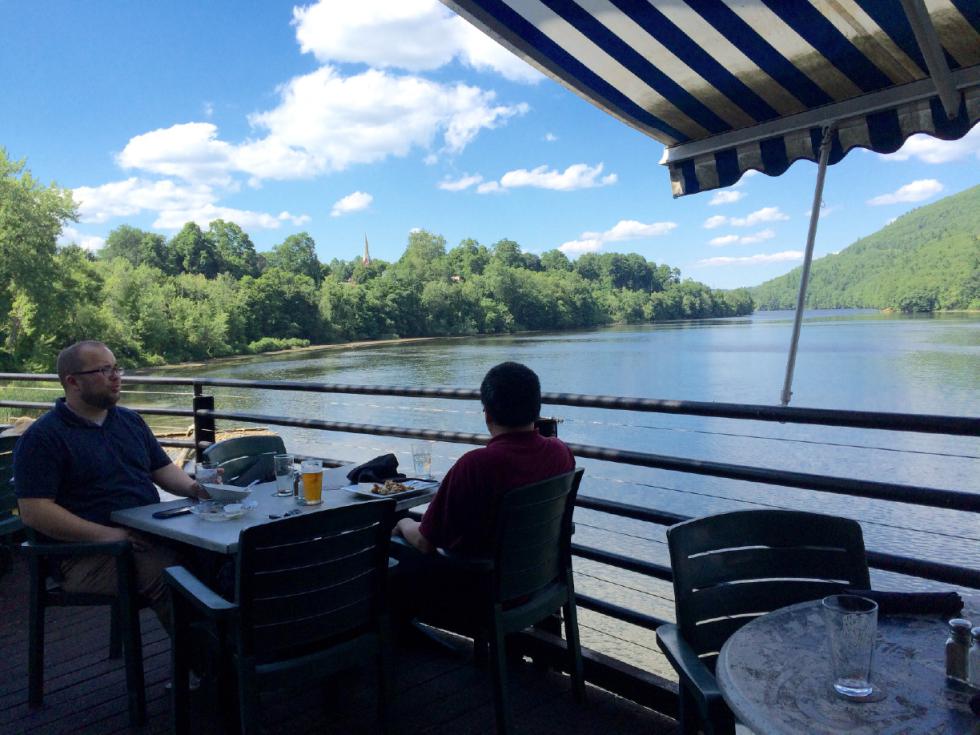 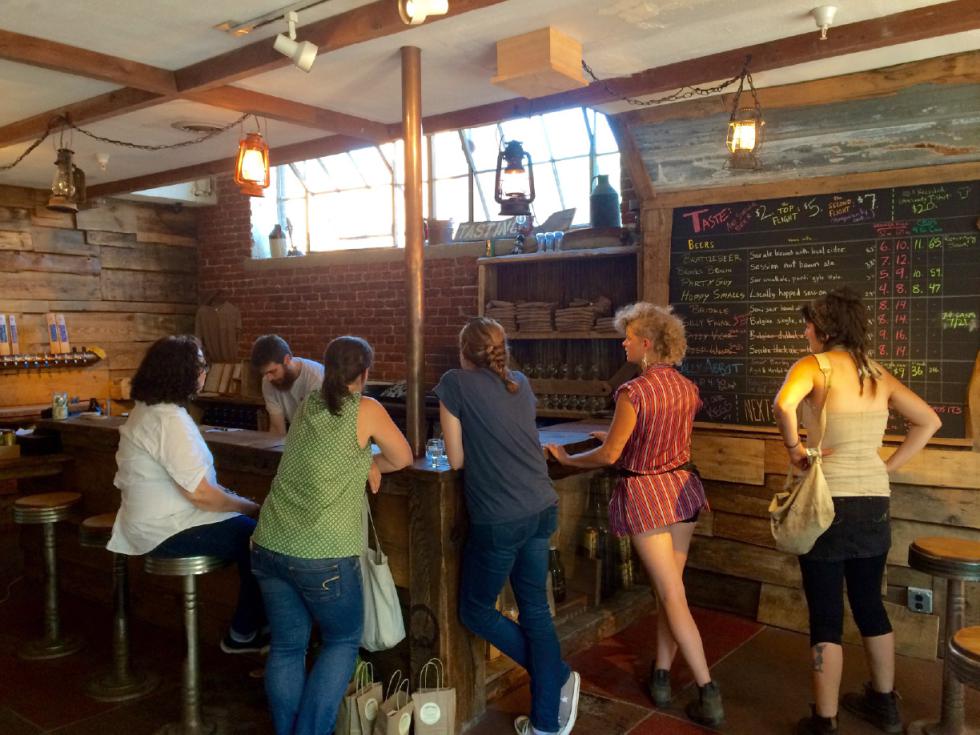 The southern Vermont town of Brattleboro does a lot of things right: green hills, friendly people, fun bookstores, and a few stellar swimming holes. But this month, the Beerhunter looks into this town’s newest promising trend: craft brewing.

Out of the beer spots in Brattleboro, I particularly recommend two: the tasting room at Hermit Thrush Brewery on High Street and the Whetstone Station restaurant and brewery on Bridge Street. Hit them up in that order for a nice mealtime visit to downtown that will leave you sated and smiling.

Hermit Thrush brewmaster Christopher Gagné and his three business partners are the new kids on the block — they moved up from Philadelphia and opened their microbrewery here just before Thanksgiving, and they started canning in June. Business has been growing quickly — Hermit Thrush now has about 40 on-tap accounts at bars and restaurants throughout Vermont — but their cozy and welcoming tasting room is worth a visit.

The team specializes in Belgian-style beers, and they seem to have a particular interest in barrel-aged sours and lower-alcohol session brews. During my visit, I tried a flight of four summer beers that showcased the personality of this young company.

There are some bad sours out there, and they can easily turn eager beer tasters into grimacing cynics, but Brattlebeer is not one of those beers. Hermit Thrush brews this sour ale with local cider, and the result, at 5.2 percent alcohol by volume (ABV), provides a blend of sharp and smooth flavor, like a tart apple.

That’s not the only successful creation on offer at Hermit Thrush. Their tasty Brooks Brown is a nut brown ale brewed at only 3.8 percent ABV, which means it delivers that warm toasty flavor without the thick consistency or foamy head you would expect from a brown ale. Hoppy Smalls, a light and floral session saison, smells and tastes great, and at 2.9 percent ABV, you could pretty much drink it all day.

The other sour ale I tried, called Party Guy, is darker and funkier than the Brattlebeer. To make this one, Hermit Thrush’s brewers use the parti-gyle technique, which means they make multiple beers out of the same grain. The second batch comes out weaker than the first, just like when a tea bag is re-steeped. So the steeped grain used to make their Jolly Abbot, a delicious 13 percent ABV barleywine just released in late July, yielded the 3 percent ABV Party Guy on the second go-round.

Employee Kobey Shwayder suggested to me that brewing lower-alcohol beers requires more finesse than brewing those with a higher alcohol content. “When you throw tons of ingredients in there, of course you’re making it taste better, because you’re adding more flavor,” he said. “But to get the exact flavor you want out of a small beer takes a lot of skill.”

Once you’re done sampling what Hermit Thrush has to offer, take a stroll down Main Street to Brattleboro’s brewery on the water: Whetstone Station. Brewmaster Tim Brady has been cooking up good beer in small batches here since 2013 in an “experimental nano-brewery” setting. The facility can only produce seven kegs of beer on each day of production, which means new brews are typically gone forever within a fortnight.

Nostalgic for a bygone batch? Try making it at home — Whetstone Station publishes all of its recipes online. But if you keep stopping in, you’re likely to find something worth savoring. The signature Whetstoner Pale Ale — the only beer that stays on tap year-round — is a solid mainstay: light and easy, but with a big aroma and a lot of flavor.

I also tried the two rotating in-house beers: a nitro stout called Don’t Worry Stout a Thing — which was creamy and well-made, if not especially remarkable — and an imperial rye IPA called 2X Rye Squared, which was wonderfully unique. This barrel-aged batch is a strong 12 percent ABV, and it tastes like it wants to be a glass of rye bourbon when it grows up. Since strong beers are almost always on the sweet side, I was surprised to find that this beer packed such a pungent punch of rye flavor. Here’s hoping Whetstone Station bucks tradition and brings this one back at some point.

In addition to a full restaurant menu, Whetstone Station has a good selection of draft beers from other local and national breweries. In fact, while you’re in southern Vermont, consider visiting more of the area’s brew spots, from Brattleboro’s homey but accomplished local brewpub McNeill’s to the nearby larger breweries within an hour’s drive, like Harpoon Brewery in Windsor and Northshire Brewery in Bennington.

But if a quick afternoon trip is all that you and your beer-loving friends have time for, these two pillars of the local craft scene will have you calling Brattleboro your new home-away-from-home in no time.

∎ Although New City Brewery in Easthampton was founded last year, and its flagship product — an 8 percent ABV ginger beer — has been available in stores for some months now, the tap room at its headquarters on Pleasant Street is still under construction. But that’s about to change. Follow the team on social media for updates as they come into the home stretch and prepare for their soft opening. The tap room will feature six rotating beers — including a fresh batch of their Bottling Line session IPA — as well as ginger beer and homemade non-alcoholic sodas.

∎ File this under “why hadn’t we thought of this before?” Starting this fall, Sierra Nevada Brewing Company will brew its annual Oktoberfest in collaboration with a different German brewery each year. The inaugural brew in the series hits shelves in August. And it’s pretty much guaranteed to be good — Sierra Nevada’s partner, the Augsburg brewery Brauhaus Riegele, has been at it since 1386.

∎ The Brewers Association has just released event details for the 24th annual Great American Beer Festival, held at the Colorado Convention Center in Denver from Sept. 24-26. Take a few days off from work and get your beer-lovin’ butt out there to experience this crazy scene, featuring samples of 3,500 beers from more than 800 breweries. Or, at the very least, alert some of your Rockies friends to this golden opportunity. Tickets for the general public are $80, on sale now through TicketMaster.•