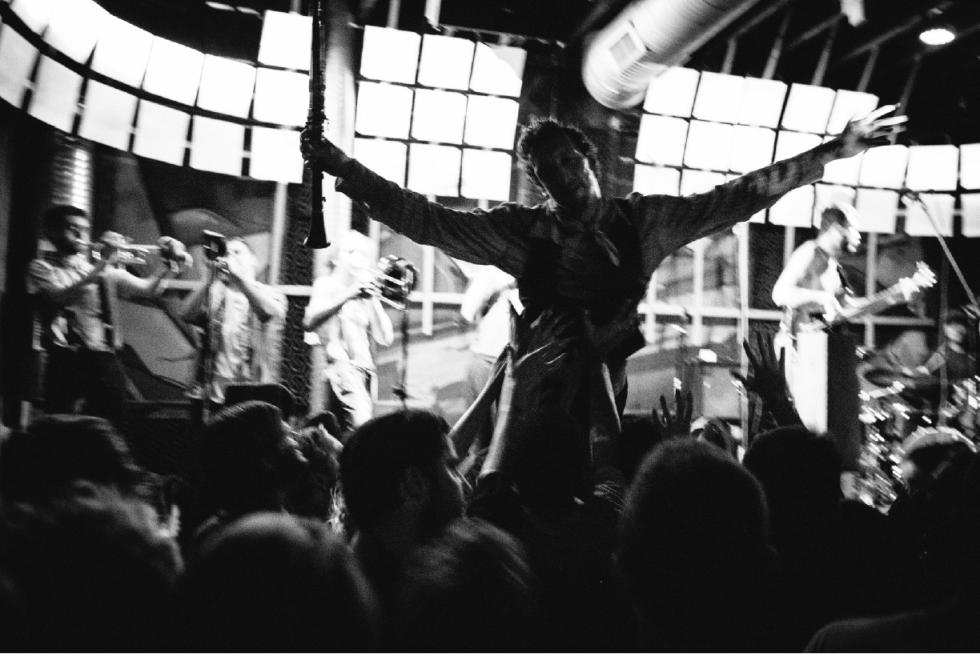 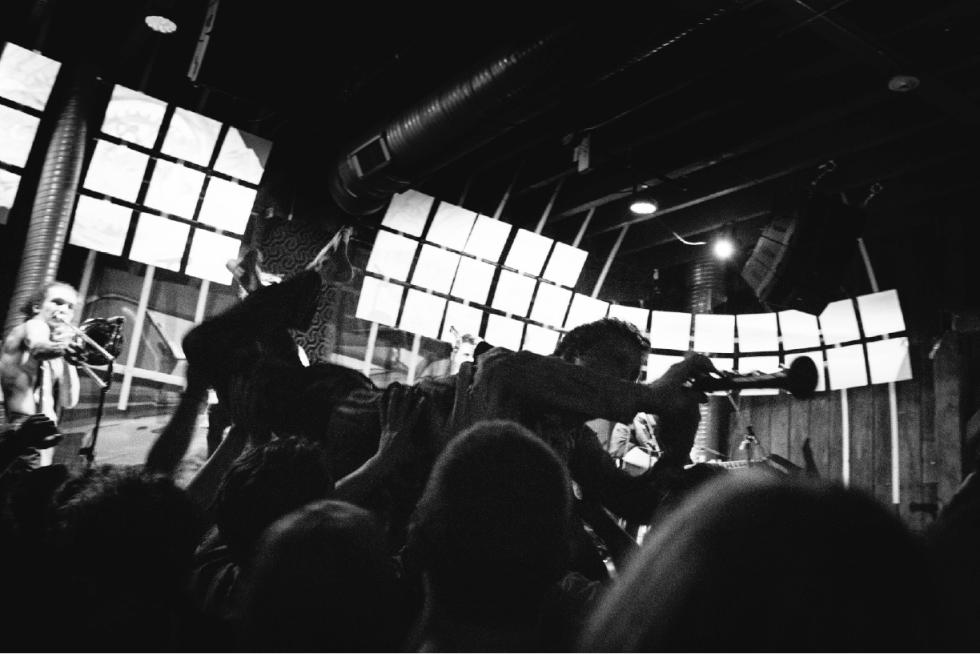 At 9:30 p.m. on a Friday, the crowd at Hinge on Main Street in Northampton is packed like sardines, and the show doesn’t start for another half-hour or so. “Excuse me,” says a woman trying to push past those of us standing in front of the bar, waiting our turn to order a beer. I try to oblige, but there’s simply no room to excuse her.

We, the awaiting audience, hear a violin and the sound of instruments warming up and move towards the stairs. The doorman removes the curtain blocking the entryway to the upstairs stage area, signaling the start of the $12 show featuring two Valley-based bands. Tonight, The Leafies You Gave Me opens for headliners Bella’s Bartok.
The Leafies’ performance is just as much theatre as it is music.
The band’s violinist dons a sparkly sequined dress. The trombone player doubles as a go-go girl when she’s not womp-womping. The first sets are a tad uncertain. Then, a man from the crowd hoists himself onto the stage. At first I think he’s a heckler. But then the musicians onstage all burst into song and it’s clear it was all part of the act.
That heckler is actually the lead vocalist. “These kids must have gone to Pioneer Valley Performing Arts School,” murmurs a member of the audience.
After about 25 minutes of The Leafies’ eclectic offerings, they take a bow and Bella’s takes the stage. The headliners’ loyal groupies are out in force; Bella’s have been touring all summer and this is their homecoming show.
And it’s easy to see they’ve been on tour. They were always entertaining — I grew up with the band’s founding members out in the Berkshires and have witnessed their eight-year trajectory — but they’ve come back pros. Not a note out of tune or a line out of sync.
The seven-member band starts out fully clothed — suspenders, button-downs, mustaches and all — but that soon changes. Every time a band member removes an item at least one person from the audience lets out a cheer, but of course no one’s surprised. It’s hot as hell in here. I was skeptical of the girl in the front row who came in her bathing suit, but now I realize she’s an absolute genius.
Ten or so groupies dominate the area closest the stage, singing along to every line. Nearly every song includes a section in which klezmer-punk beats get the whole crowd stomping. Hinge’s creaky, wooden floor seems to buckle with each unified crash back down toward Earth.
The atmosphere is such that I feel like I’m in the movie Aliens. There’s hot breath all around me and a constant spittle hits my neck. It’s hard to tell if it’s a beer splash, spit-valve spray from the horn section, or a leaky ceiling pipe.
Mandy Pachios, lead singer of The Mary Jane Jones, another Northampton-based favorite, smiles and squints as she swirls around with her dance partners near the stage.
One of the lead vocalists, Chris Kerrigan, dives smilingly into the audience, clarinet in-hand, without warning. The tightly packed crowd doesn’t miss a beat — not for a second is anyone concerned he will fall.
A resting band member nudges a nearby photographer. “Get a shot of this,” he says excitedly. “This is him in his element.”•
— Amanda Drane, adrane@valleyadvocate.com