Bong King to the Stars: Chris Hubbard’s success with blown glass pot pipes and bongs is out of this world 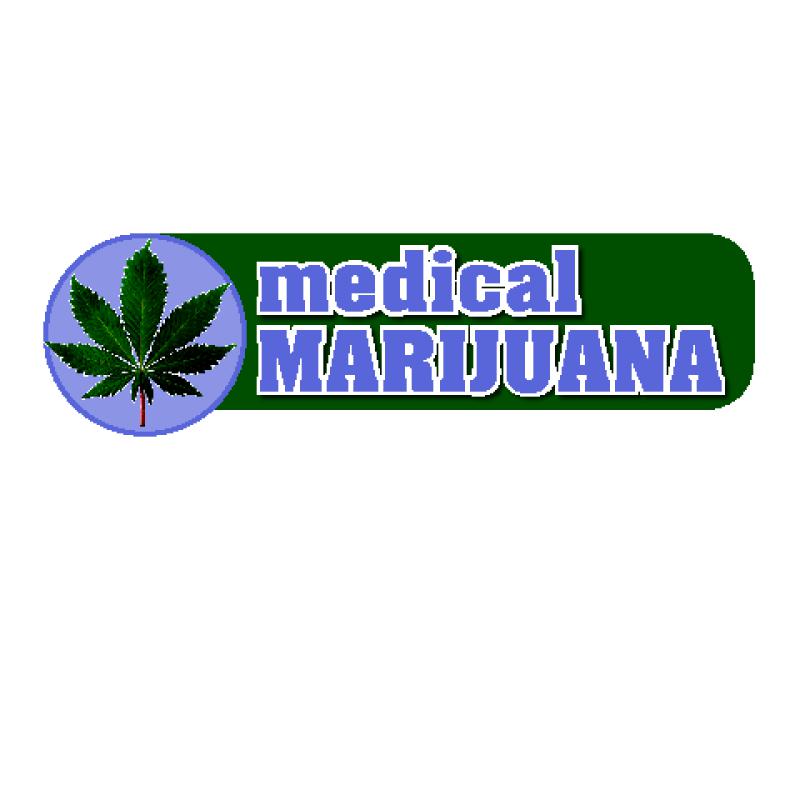 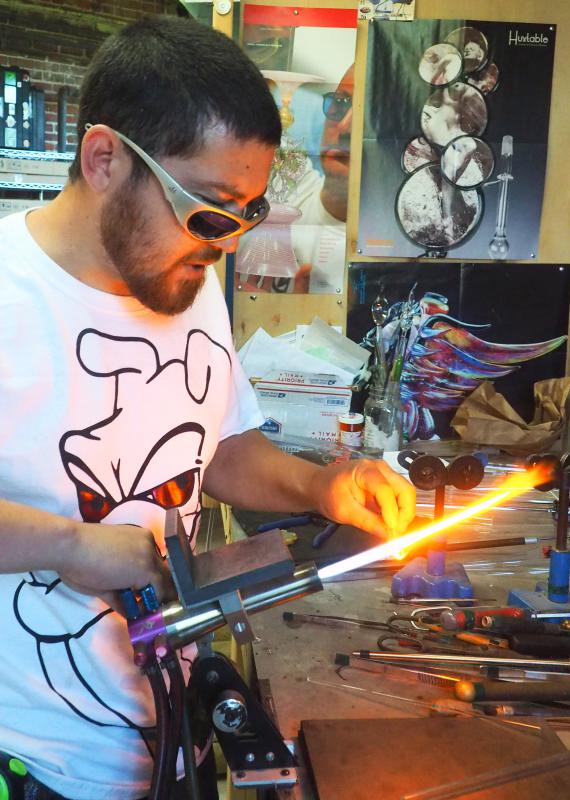 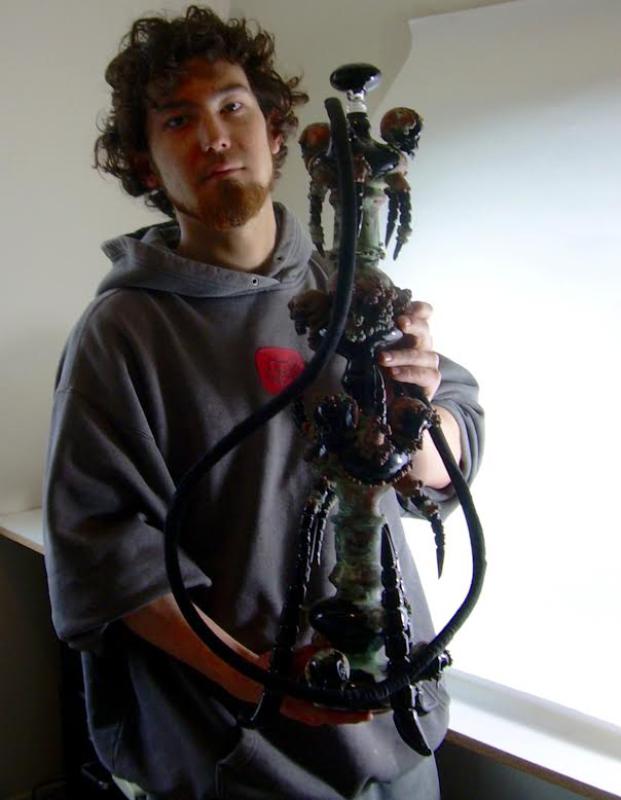 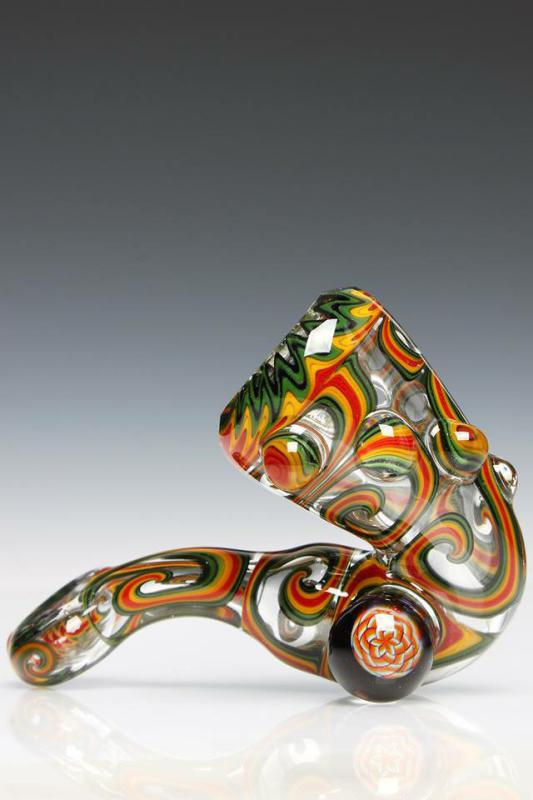 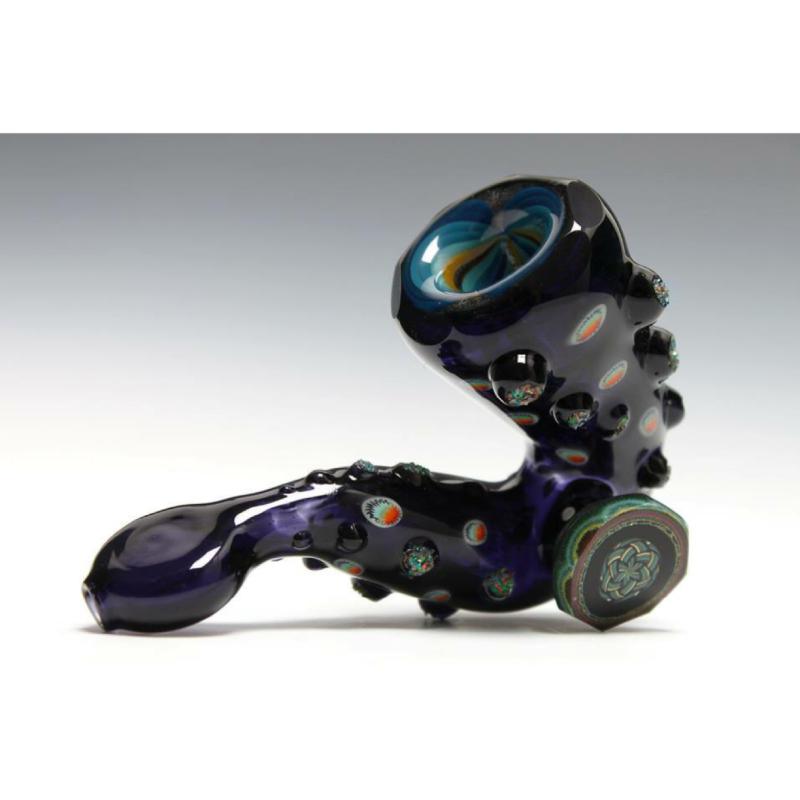 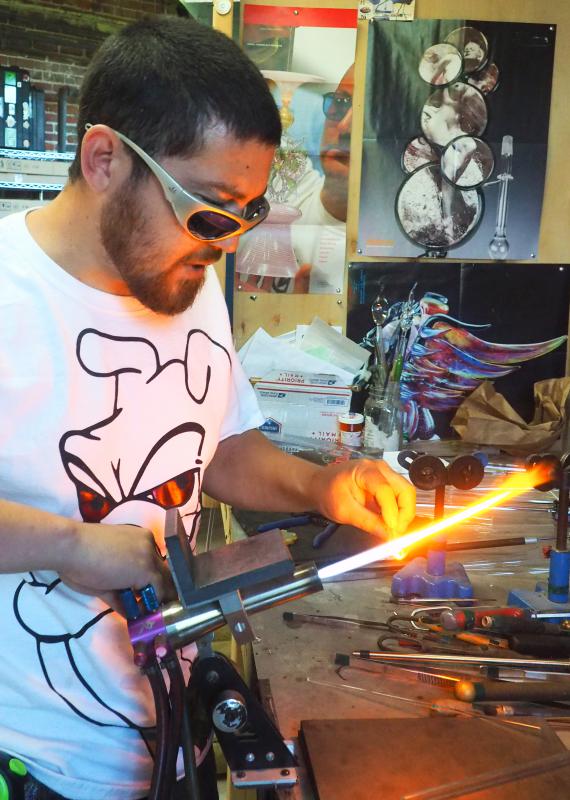 A singular event in Bingen, Washington marked Chris Hubbard’s transformation from glassblowing hobbyist to professional: “On Aug. 3, 2005, a SWAT team kicked in my door. They thought the studio was a meth lab,” Hubbard says. He had his medical marijuana card, and was inside “listening to Bob Marley — ‘No Woman, No Cry.’ They didn’t find any meth.”

They did, however, discover his marijuana. Though he was licensed to have it to help with a particularly unpleasant variant of migraine, Hubbard says things didn’t go well. His medical marijuana card was in his truck, but his truck was towed away by the police. “They took everything,” he says, “including the glassblowing equipment.”

When the dust finally settled, Hubbard ended up with a misdemeanor conviction for displaying medical marijuana in public. “One of the neighbors could see the plants from his backyard,” he says. When the judge asked him how he was going to pay the $18,000 in costs and fines, Hubbard said he was a professional glassblower. “I told the judge that’s what I did, so then I had to do it,” he says. “The only other skill I had was teaching snowboarding.”

In those early days, he made marijuana pipes to sell to local headshops, and because he needed the money, he says, he took less than the pieces were worth. The West Coast market was flooded with pipe makers, but through tenacity, good work, and lending a hand to big name glassblowers, Hubbard made his mark. Now, after returning to the Valley four years ago — he grew up here and in Japan — Hubbard pays the bills with a steady stream of glass belt buckles and Sherlock-style pipes. The legalization of medical marijuana and decriminalization of possession of small amounts, he explains, opened up a new market. Luckily, Hubbard says, “the growth [of the market] is exponential.”

Hubbard shares a Florence studio with fellow glassblower Noah Rockland, and their two-room corner of the old Pro Brush building is a crazyquilt of posters (mostly of impressive pipes), tools, and pieces of glass. Most of the glass is in the form of colored rods. It’s remarkable to see the gleaming, baroque patterns and colors in the finished products and realize that they start with simple glass cylinders and rods. The process, he explains, often starts with sandwiching colored rods between clear cylinders. That’s all melted together, creating a layer of color within clear glass. A bewildering array of methods then yield zig-zags, swirls, and basket weaves.

It’s hard at first to imagine how the weaves happen. To explain it, Hubbard displays a ribbon of rainbow glass. He says the ribbon is cut into pieces, and the pieces are then carefully placed to create a weave. It’s clear that a lot of work goes into every piece. “This is not a spectator sport,” he says.

Though Hubbard says a pipe that retails for $400-$500 can come together in a few hours, those few hours have to be preceded by the prep work that allows him to, for instance, slice a cylinder to reveal a complex pattern in cross-section, a pattern that becomes one small part of a large pipe. Breaking all that down to an exact number of hours per pipe isn’t easy.

Hubbard sees his work as the centerpiece in people’s personal rituals around smoking. “A pipe gives you something to relate to, something to appreciate, rather than just an apple or a tin can.”

It’s not hard to appreciate his pipes — at their most ornate, they look like weird apparatus from Alien that’s in mid-spin through a psychedelic rainbow. The closer you look, the more layers of color and pattern reveal themselves. The aesthetic of glass pipes, and indeed the art of coloring this kind of glass, came from Deadhead culture, Hubbard explains. They’re not made of the “soft glass” used by most glassblowers. “If you put a hot pan down on a table made of soft glass,” Hubbard says, “it would shatter.”

Pipes are made of “hard,” or “scientific” glass, also known as borosilicate glass. Its chief useful characteristic is its heat resistance, which makes it a perfect choice for pipes. Coloring scientific glass is a fairly recent phenomenon, and it began with a glassblower named Bob Snodgrass, who stumbled upon the method and made a living selling pipes at Grateful Dead shows. From that beginning, a whole movement began. Unfortunately, that movement existed in a legal gray area. While the pieces got more and more ornate and interesting, the Bush administration got more and more draconian. In 2003, Attorney General John Ashcroft — the same Ashcroft who had the naked statue of Justice covered — oversaw Operation Pipe Dreams, which resulted in the indictment of 50 sellers and makers of pipes. It’s par for the course in marijuana law: a complex, ill-defined, and inconsistently enforced set of rules that people like Hubbard have to be aware of, rules that can have major consequences even in the era of ever-loosening laws.

For Hubbard, such legal trouble had ironic consequences, leading him to the full-time pursuit of pipe-making. He just passed the 10-year anniversary of his SWAT raid, and he marked the occasion in high style. He grabs the prototype of the piece he devised, and it’s a spidery, gleaming conglomeration of glass that forms a large rectangle.

He points to one end: “The lights go in here.”

He shows the other end, and it’s got a familiar shape. “And you can smoke out of it!”•