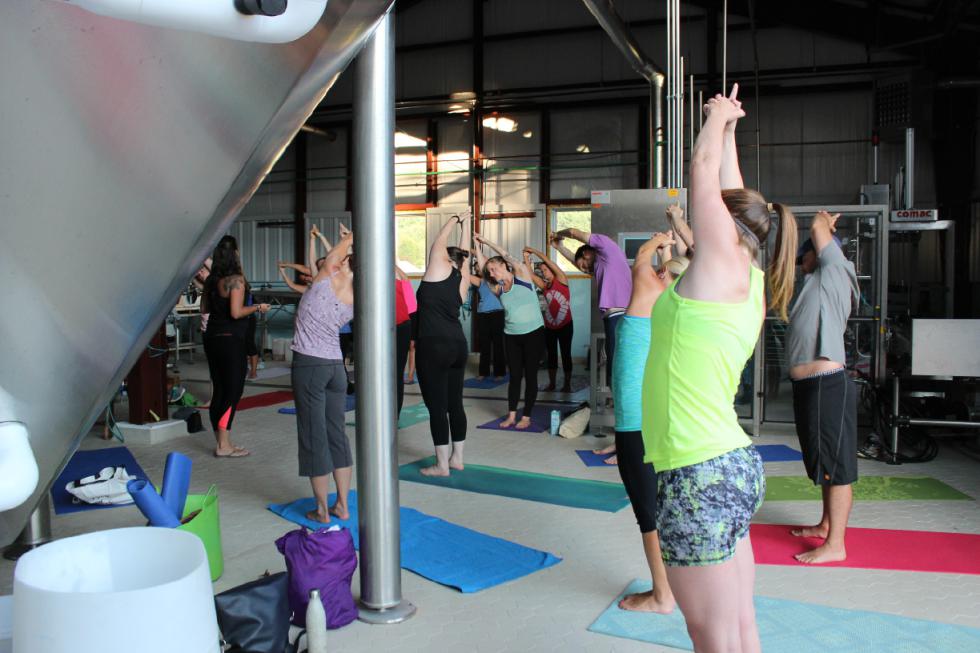 At 6:20 p.m. on a Thursday I arrive at Fort Hill Brewery in Easthampton to do yoga and drink beer. Clad in yoga attire, we the attendees make our way up to the large, bustling farm building on Fort Hill Road.
Brightly colored mats, yoga clothes, and water bottles in hand, the yoga crowd starkly contrasts with the muted tones of beer drinkers spilling out of the tasting room.
“Where are you guys doin’ yoga?” one beer drinker asks while leaning out of her Adirondack chair on the front porch. Her beer sloshes to the top of the glass and nearly spills. “And the more important question — did you bring me a mat?”
Inside, booming voices bounce around the polished wooden walls and floors. Instructor and Yoga and Beer organizer Caitlin Lavin passes out a paper to sign before we get our yoga on.
Lavin leads us back into the depths of the building to where all the action happens. As we feast our eyes upon the space station-like brew room — giant silver vats overwhelm us as we step over tubing and cords — the Backstreet Boys’ smash hit “Backstreet’s Back” blasts. Disoriented and intrigued, the yogis grin and look at each other.
“Welcome to Yoga and Beer,” says Lavin, full of energy. She’s the enthusiastic type who has no problem projecting her voice, but she gets tongue-tied over a word. “See, this is why we drink beer after the class. I don’t wanna be all like, errr.” The yogis laugh.
In mountain pose, standing upright and facing forward at the front of the mat, my gaze is toward the large, silver vats on the brewery floor. They look like giant silver ice cream cones. With clasped hands and pointed index fingers, we reach for the ceiling and tilt our heads back into a slight backbend, and that’s when I notice the marshmallow ceilings. They’re lined with a pillowy white material that seems to muffle sound. The handful of ceiling fans and floor fans blowing at the yoga students also help with that — one student parked right in front of a floor fan and her billowing yoga shirt does the Marilyn Monroe. As Lavin calls for a downward dog pose, I realize just how great this spot actually is — the entire back wall of the barn is open, so we look out on the setting sun, the crescent moon, and hops growing in the fields.
Moving from pose to pose, we quickly work up a sweat.
“I know it’s hot,” says Lavin. “Just think of all that beer in there for you to drink.”
Doing bridge pose with a single leg raise, that motivational leverage starts to sound pretty good.
After a brief shavasana — the rest period that closes every yoga class — Lavin winds the class down to its finish after 45 minutes or so.
“Normally I say namaste, but we’re at the brewery so I’ll say cheers,” says Lavin. The yogis waste no time in rolling up their mats and beelining for the bar to get their sweet rewards.•

Lavin started Yoga and Beer last fall as a way to teach more accessible, less intimidating yoga classes. She teaches four to five classes each month at local breweries. Search for Yoga and Beer on Facebook and Meetup for information regarding upcoming events.