Scene Here: Beam Me Up 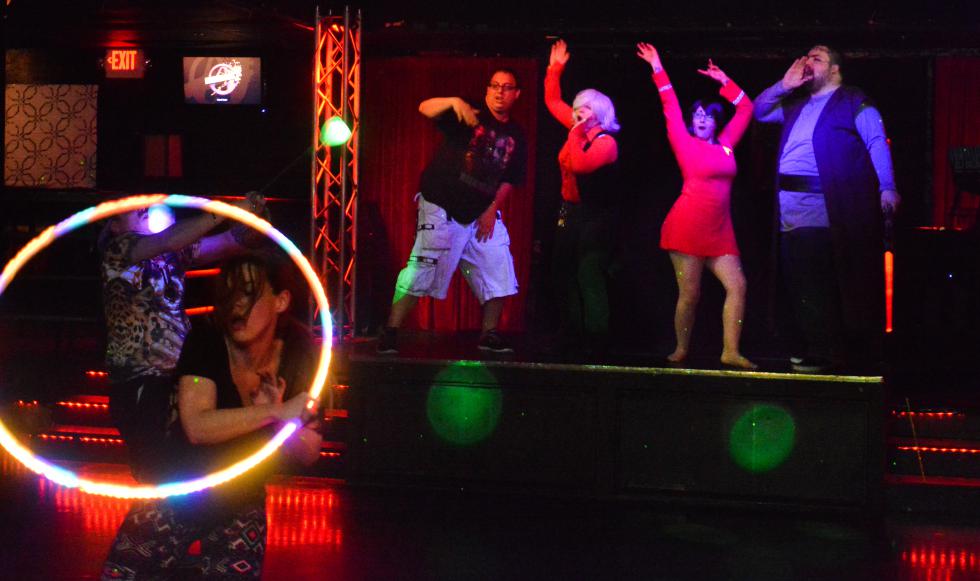 Bulbs flash. Beats drop. Bass thuds in my ribcage. On the dance floor, bolts of light swirl together in neon colors, and the dancers are a galaxy of iconic sci-fi stars.

A tall young man with long hair and a Jedi cloak whips his red double-bladed lightsaber in spiralling arcs, commanding the dance floor like a deadly galactic baton twirler. A girl dressed as Uhura gets down and dirty on the stage alongside Dj Ruki and Dr Wattz, while a dead ringer for the evil Emperor Palpatine — tall and black-robed, with a spooky white face — joyfully struts, poses, and vogues.

They have arrived from worlds all over of the universe, but from two in particular: planets Roddenberry and Lucas. This is “Star Wars vs. Star Trek,” the first themed costume night for the Games, Geeks, and Cosplay group, organized by Divas’s and gathered here once a month for drinks, dancing, and all things nerdy fantastical.

I order a bottle of beer from Boba Fett, whom I assume is the bartender. He or she (hard to tell behind that mask) takes my dollar bills, then wanders down the counter in search of further bounty. I watch more guests come through the door. It’s 11pm on a Tuesday night, and the place is hardly packed. But the people arriving now clearly didn’t step in by accident.

Alex, who lives in Wilbraham, comes to the bar in a tan vest and leather arm guards. This is his fall-back outfit — he calls it his “steampunk soldier” look — since his last-minute search for Star Trek costuming at Party City and the Holyoke Mall proved fruitless.

His girlfriend Jessica, from Holyoke, wears a crinkly dress, a sheer spiderweb cape, and blue wig with a hair pin in the shape of a meat cleaver. She says she is going for the “murderous witch” look. She met Alex last year at In-CON-Ceivable in Northampton, where both were cosplaying. They’re considering coming back next month, when Diva’s hosts a Pokémon-themed night.

Around the dark room, vendors are selling their nerdy wares: TARDIS and Dalek drinking glasses, decals of Autobots and Decepticons, hand-knit plush toys that look like Cthulhu, and one adorably weird Marvel/Lovecraft mash-up: a Deadpool doll with tentacles where his mouth should be.

But the main attraction is the dance floor. Toward midnight, the club will host a costume contest with cash prizes. But until then, revelers seem happy to put the competition out of their heads, dancing to a beat that takes them far, far away.