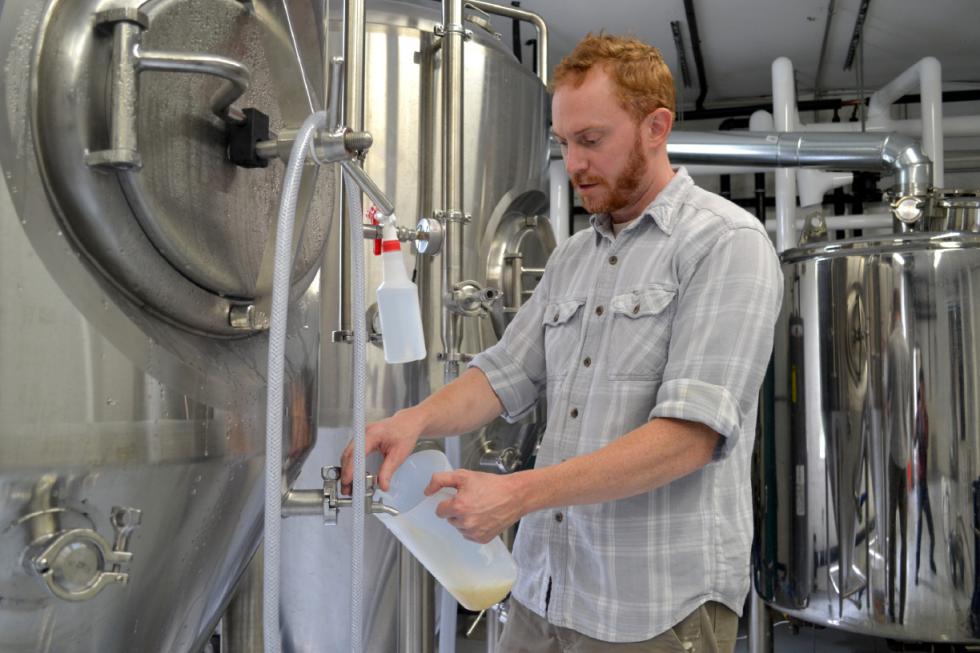 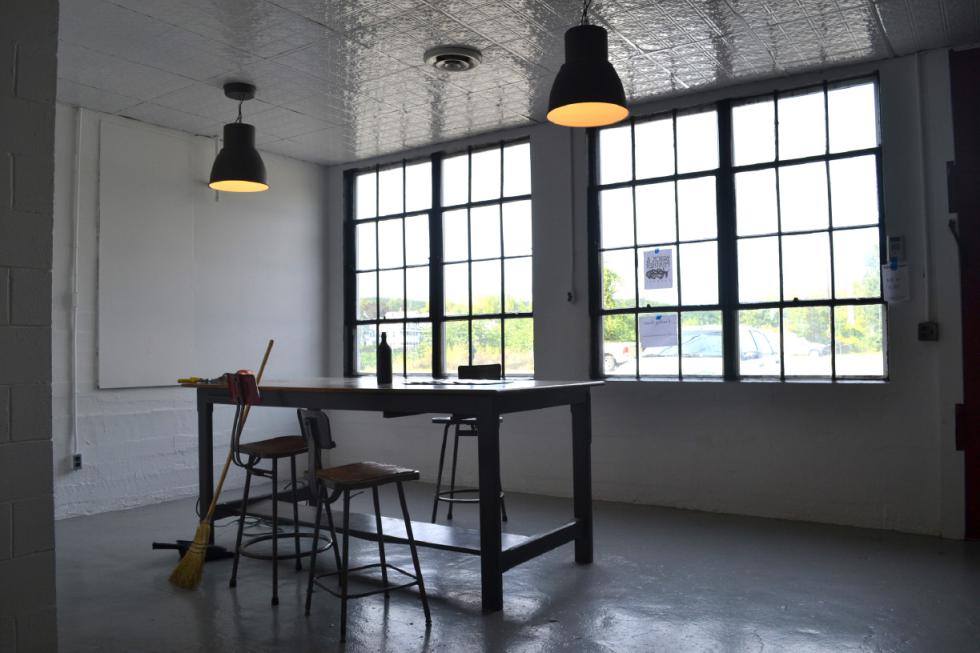 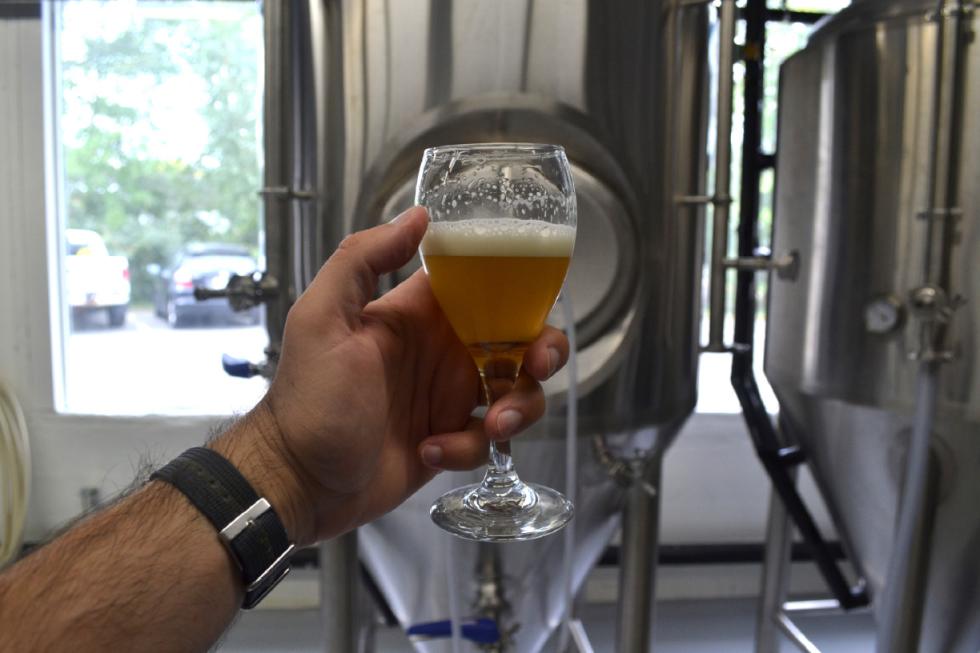 Lawrence George pours a hazy-gold sample of beer from the tank and passes it to me in a small glass. It is a bold and flavorful take on an American pale ale: hoppy, tangy, and delicious.

In another tank, George is fermenting a slightly sweeter version of this beer, tweaking the recipe until he gets it just right. That one won’t be ready for a while. In the meantime, he lets me try a third test brew: a light-yellow Belgian-style table beer brewed with French yeast, German malt, and Australian and American hops. It is smooth, aromatic, and really tasty.

Aside from the experimenting George has been doing in a little five-gallon system at home, these are his new brewery’s first-ever batches. If all goes well, Brick & Feather will brew some porters, IPAs, and other favorites down the road.

“It’s been nerve-wracking, but I’m pretty happy,” he says. “I’ve had a couple of professional brewer friends in here to taste these, and everyone says I’m doing great. So I’m feeling better and better.”

Which is good news, since Brick & Feather is slated to open this Columbus Day weekend. It will be the second local brewery in the town of Montague (after Element Brewing Company, which is five years old) and the first in the village of Turners Falls.

While Element delights in oddball fusions, exploring flavors like green tea, brown rice, and maple syrup, George is looking for opportunities to make mainstay varieties — like this American pale ale — even more refined and interesting.

Brick & Feather moved into the former Alpha Stone building on 11th Street in January. The brewery will have a tasting room, where guests can get their growlers filled and try two-ounce samples. These brews will also be available on draft up and down the Valley (George says that he currently has half a dozen contract requests from local bars).

If he pursues a pouring permit, George will also be able to sell flights and pints. But, one step at a time. “I don’t want to deal with running a bar,” he explains. “But I do think people are going to want to come in here, sit and have a beer, and look out the windows at the bike path. I want to take the slow approach to get my feet wet.”

George, now 39 years old, has spent the past decade at breweries in New Jersey, Boston, California, and most recently for four years at Berkshire Brewing Company in South Deerfield. He has brewed on five-barrel systems and 50-barrel systems, but this is the first time he has put his own brewery together, piece by piece, just the way he wants it.

He’s certainly not the only one. Massachusetts now has over 60 craft breweries, with more opening every year. Because of this, George says, he has been hesitant to do much self-promotion. Hopefully, the quality of Brick & Feather’s beers will speak for itself.

“I’d rather drink a PBR than a crappy microbrew,” he says, laughing. “And there are a lot of crappy microbrews out there, unfortunately. If a beer is well-made, you can appreciate it no matter what style it is.”

George’s wife Emily — who led the redesign of the building’s interior, including the bright, sun-filled tasting room — came up with the phrase “brick and feather” to describe the two most important aspects of good brewing: industry and artistry. In other words: a lot of heavy lifting plus constant creative thinking.

I ask him why American craft beer is seeing a surge in popularity — and quality — over the past decade. His answer is simple: the newest generation of brewmasters grew up drinking craft beer.

“That’s not the case with brewers over 40 years old,” he says. “We now have a lot of brand-new breweries doing great work because they’ve been home-brewing from a young age.”

When Brick & Feather opens, visitors can taste test for themselves. But I am delighted to get through the door in this rare moment: when the brewer is feeling confident and proud, but the finished products haven’t yet hit the tap room.

∎ Brace yourselves — October is here, and with it comes a cavalcade of Oktoberfest fun. In Easthampton, Ubeer Fest takes over the Eastworks building on Oct. 3. In Springfield, the Student Prince Cafe & The Fort Dining Room is hosting a two-day celebration Oct. 2-3. And the Young Men’s Club of Hadley is producing an Oktoberfest event on Oct. 10. So is Iron Duke Brewing in Ludlow — theirs will feature live music, games, food trucks, s’mores, and roasted corn. But this list is hardly comprehensive. Ask around, check your listings, and ask Google what’s happening near you this month to celebrate.

∎ If you want some exercise to pair with all those Oktoberfest carbs, consider joining Pedal 2 Pints for their annual Fall Foliage Ride. Bike with the group to Brick & Feather in Turners as well as to breweries in Millers Falls, Greenfield, and Brattleboro. Check out their Facebook page for more info.

∎ Northampton’s new BLDG8 Brewing is officially up and running, helmed by Megan Tomalin and her husband O’Brian, owner of Sierra Grille, in collaboration with brewmaster Mike Yates. It looks like they will be open regularly on the weekends, so be sure to pay them a visit.•