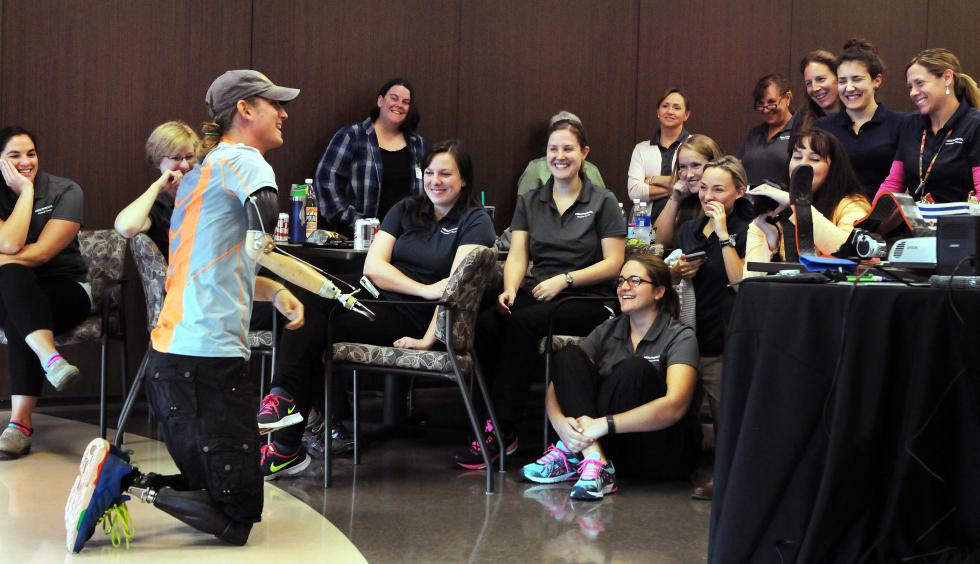 KEVIN GUTTING Athlete, actor and triple amputee Cameron Clapp of California demonstrates how he gets up after a fall during a motivational talk to health care workers at HealthSouth Rehabilitation Hospital of Western Massachusetts in Ludlow on Tuesday, October 6, 2015.

When Cameron Clapp was 15, a night of drinking landed him on train tracks, where an oncoming freight train took his arm and both his legs.
“Right now, in this moment,” Clapp tells a room full of health care professionals at Healthsouth Rehabilitation Hospital of Western Massachusetts in Ludlow, “being alive is a miracle.”
Smells of salad, deli meat, and pickles fill the room where Clapp, now 29, gives his lunch-hour lecture. Clapp, a California-based activist and spokesperson for Hanger prosthetics, tours the country giving motivational speeches and helping amputees learn to live more independent lives.
In his prosthetic right hand, Clapp holds his iPhone with a clamp feature and flips through photos and videos in his slideshow that are displayed on a big screen. Like any good speaker without a podium, he walks back and forth across the floor as he talks.
After his accident, which took both Clapp’s legs above the knee and his arm above the elbow, doctors told him he’d never walk again. “I’m very, very, very, very lucky,” he says. “My goal was to get out of the wheelchair.” Clapp shows a photo of himself in silhouette, arms raised in victory with his overturned wheelchair in the foreground. He fell immediately following the shot was taken, he confesses.
But falling is a big part of success that’s sure to happen, Clapp says.
Before the accident on the train tracks, Clapp was an athlete and he didn’t want that to change after he lost several limbs. New to his mechanical legs at the time, Clapp shows the audience a short video of him running a bit awkwardly. In the video, Clapp falls on the track short of the finish line, but quickly gets back up. Though it wasn’t that day, he eventually scored one win against his rival, he tells the crowd.
He clicks to an image of him running beside his sister in a half-marathon. “It was really meaningful to be able to run next to my sister,” he says.
He closes with a video of him running, hitting jumps on skis, surfing, and — of course — falling.
“The first doctor I saw told me I’d never walk again,” he says. “Empower these patients. Give them the opportunity to live life to the fullest.”
Following his talk, Clapp demonstrates how to fall safely, how to get back up again, and how to put on his prosthetic legs. “You’re guaranteed to fall unless you’re not pushing yourself,” he says. “Loosen up and go with it.”
He tucks his shoulder in and falls into the floor, landing sprawled out, face up.
“Now you have to get back up again.”•