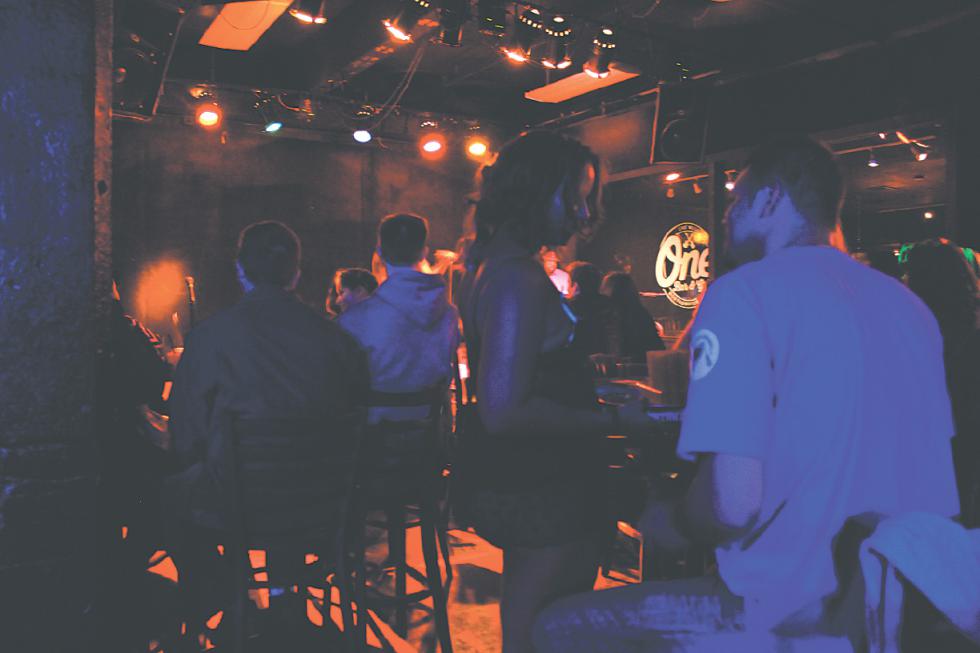 The Mary Jane Jones kicks off the night of comedy and lingerie at One Bar and Grill in Northampton with several soulful love songs. Eyes closed, lead singer Mandy Pachios growls a velvet reverie.
A shot girl in a form-fitting, black nightgown with a laced back that barely covers her cheeks reminds me of tonight’s theme at One Bar: Forbidden Comedy. This is no Free the Ta-tas — it is possible to use laughs and lingerie to fundraise without objectifying women.
Tonight music, comedy, and locally designed lingerie combine to raise money for breast cancer research. Host Timothy Lovett says 10 percent of the proceeds will be given to Susan G. Komen for the Cure, as well as all of tonight’s raffle money.
“Just remind yourself you’re coming for comedy, not to see women model lingerie,” reads one Facebook shout-out. “For comedy. For comedy. For comedy …”
As the band wraps up their last song, Lovett hops behind the mic. “What’s up, One Bar?” yells Lovett. The crowd, which is about 40-strong, cheers. “Everybody loves a love story.”
Lovett turns attention toward his love life, joking about how dating an adventurous woman can be an expensive proposition. “I can’t afford furry handcuffs and rope,” starts Lovett. “Just gimme duct tape and an extension cord.”
Dating in this town is hard, Lovett tells the audience. “Women are such picky eaters in Northampton,” Lovett says with a smirk. The crowd laughs and he hasn’t even gotten to his dad-joke of a punch line yet. “I was dating a vegan and that was a huge mistake,” emphasis on the second syllable.
Going for second base with a woman for the first time, says Lovett — “Do people still talk about bases?” — “They never let you go for the bad breast first. They all got a good breast and a bad breast.”
Lovett launches into an idea for a sitcom about the “pretty titty and the witty titty from the streets.” As Lovett details the kinds of shenanigans the duo gets into, from “the court of bra” to a “mammogram of cocaine inside the funbags,” the crowd is crying with laughter. “They were too different,” says Lovett, mimicking the sitcom’s TV announcer. “But together they were well-rounded.”
The next comedian takes the stage. Vermont-based comedian Jade Marcotte jokes about defunding Planned Parenthood — “I’m all for it,” she says, “if there’s going to be a going-out-of-business sale on half-priced abortions.”
She riffs on dealing with the male gaze and romance. “What’s your bra size, everyone’s always asking me,” she says of Tinder. “‘How much do they weigh,’ one guy asked me,” she says, pausing. “So I weighed them.”
“I don’t get it, is he like a fisherman? Does he toss them back into the sea because they don’t weigh 13 pounds?”
In between acts, friends of Springfield-based Designs By Jacqui walk the stage in frilly, lacey outfits. Between stand-up routines, the women change into new outfits before shyly strolling amid the patrons with a tray of tube-shaped shooters.
I stay and laugh for a couple of hours, but then head home. Checking Lovett’s Facebook page Saturday morning, I realize I left too early. The male comedians closed the show with some lingerie modeling of their own. The FB photo gallery shows one man in form-fitting briefs, a leather vest, and a cap. Another comedian sports only a leather Speedo. And another finished the night as a sexy sailor.