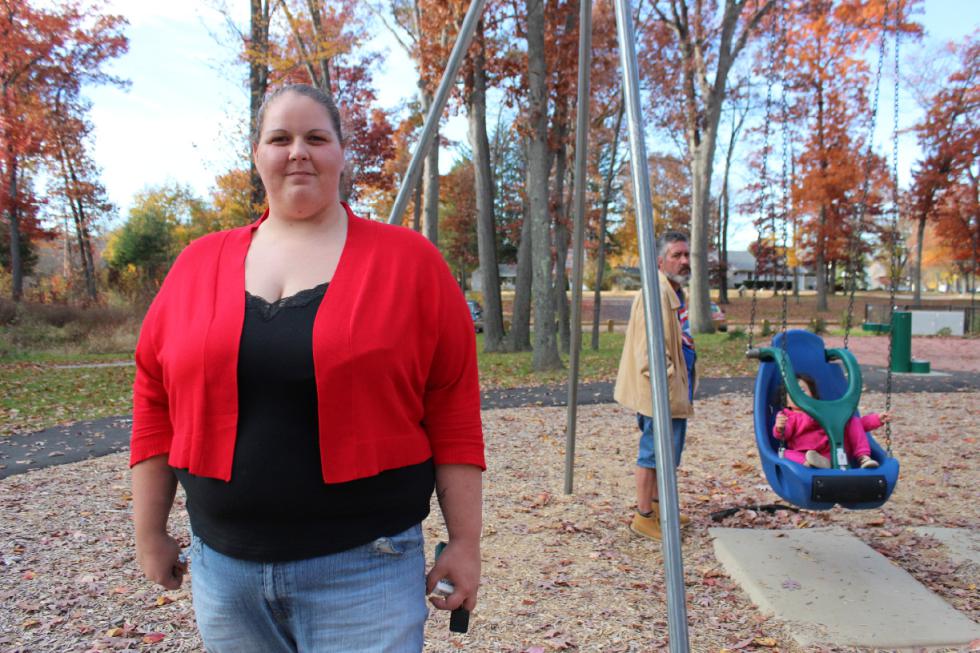 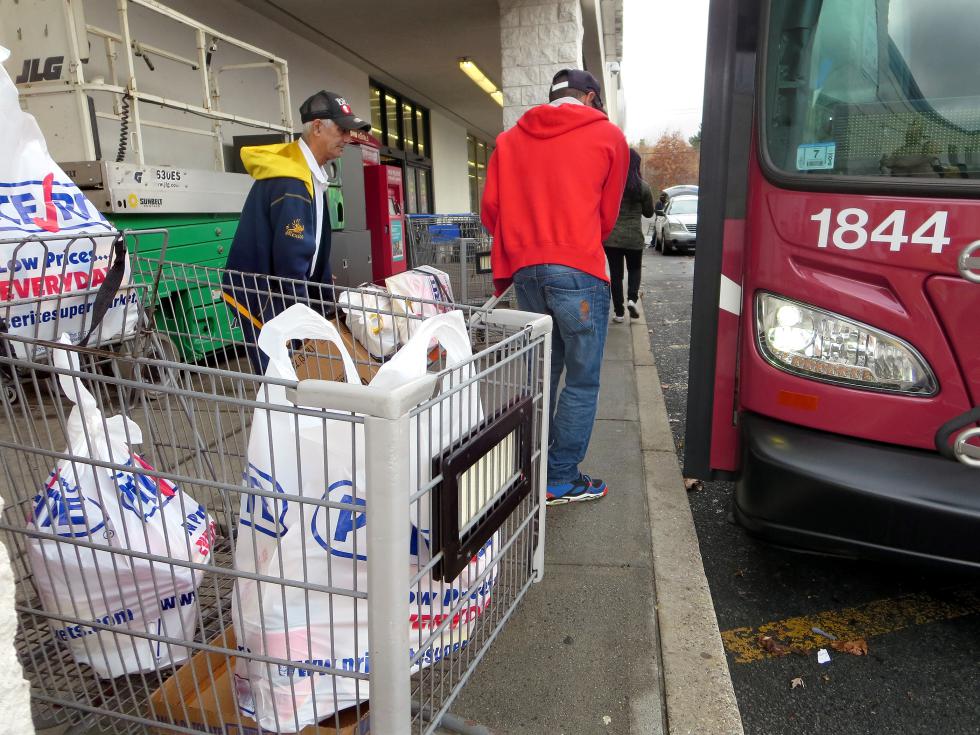 KEVIN GUTTING Osvaldo Morales, left, 68 of Chestnut Street in Springfield helps friend Julio Sanchez, 44, of Dwight Street to lift his hand cart onto an westbound PVPA B-7 bus after shopping at the Price Rite supermarket on Boston Road in Springfield on Friday. 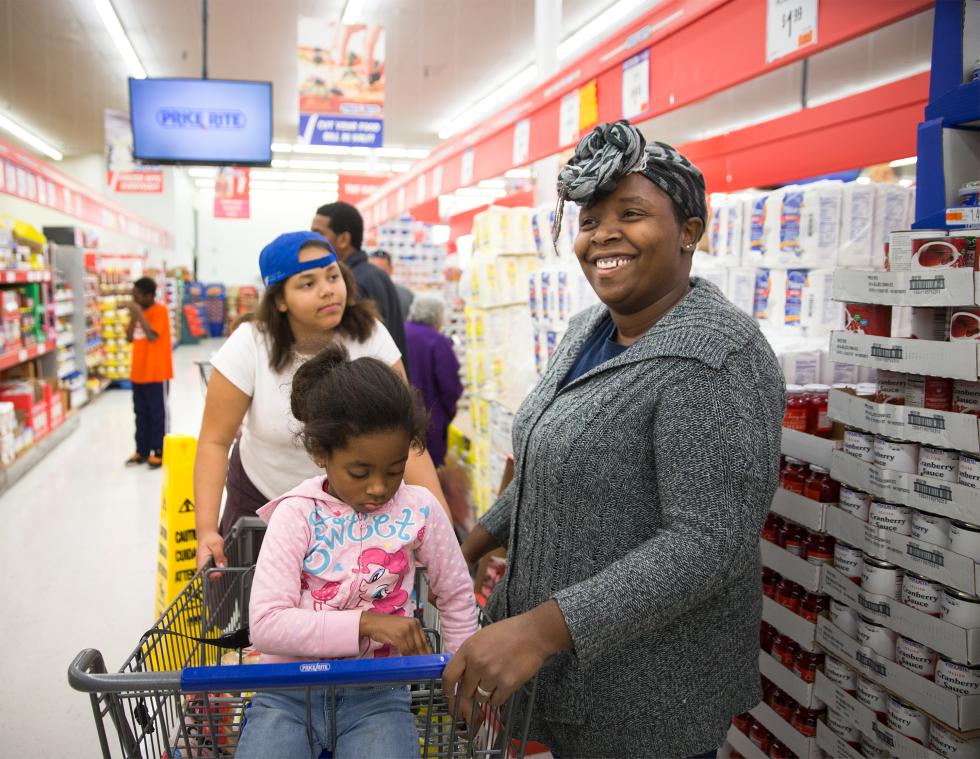 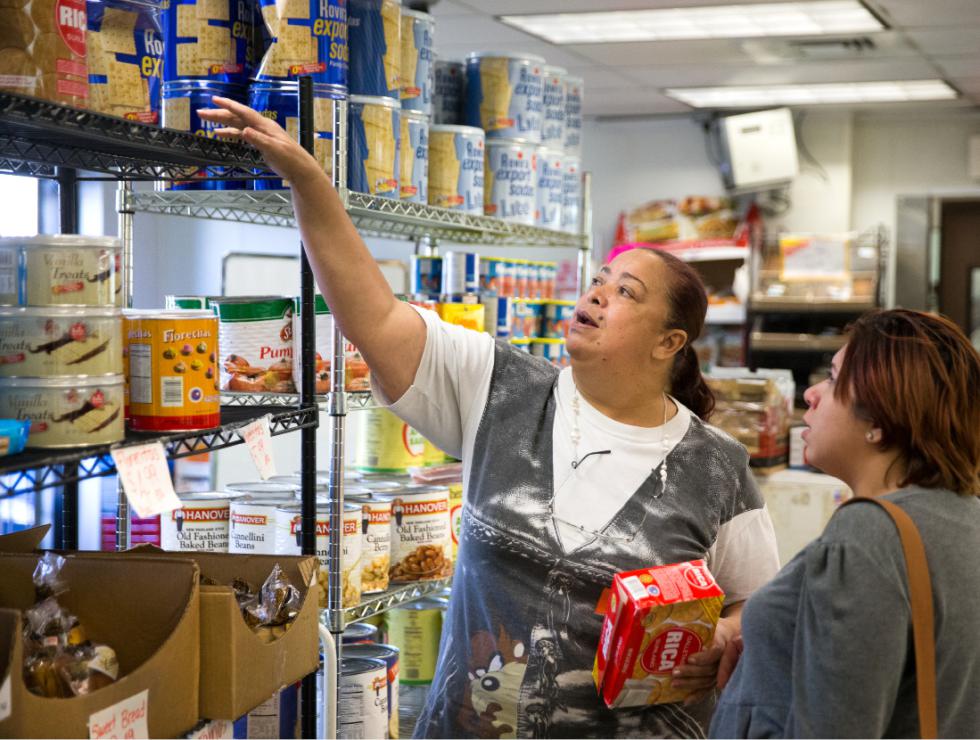 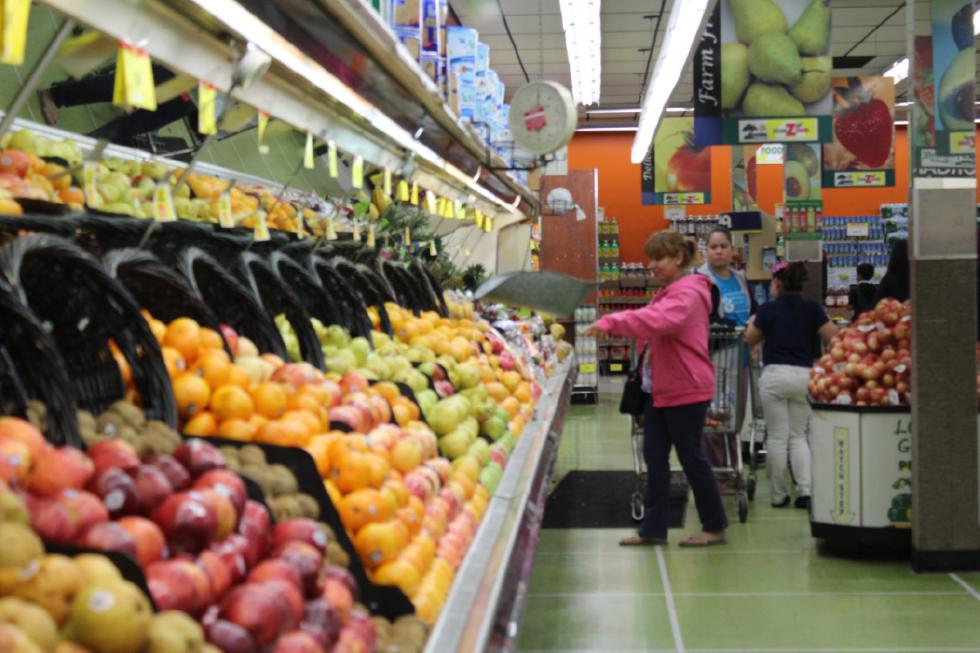 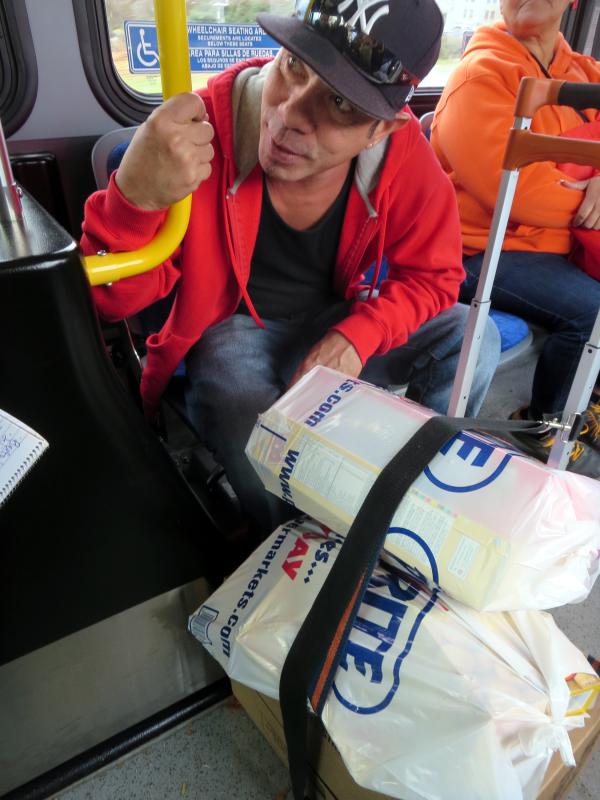 KEVIN GUTTING Julio Sanchez, left, 44, of Dwight Street in Springfield sits with a hand cart carrying his three-bag limit as he travels home on the PVPA B-7 bus after shopping at the Price Rite supermarket on Boston Road in Springfield on Friday. Sanchez says he makes the trip about two or three times a month. 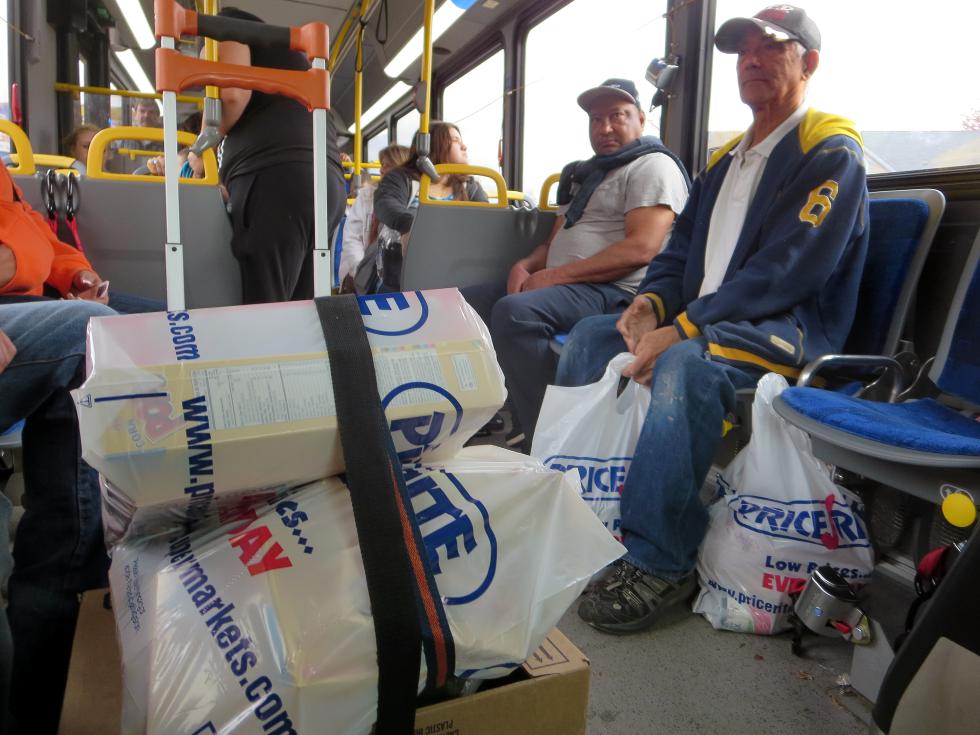 KEVIN GUTTING Osvaldo Morales, right, 68 of Chestnut Street in Springfield rides the westbound PVPA B-7 bus home after shopping at the Price Rite supermarket on Boston Road in Springfield on Friday. 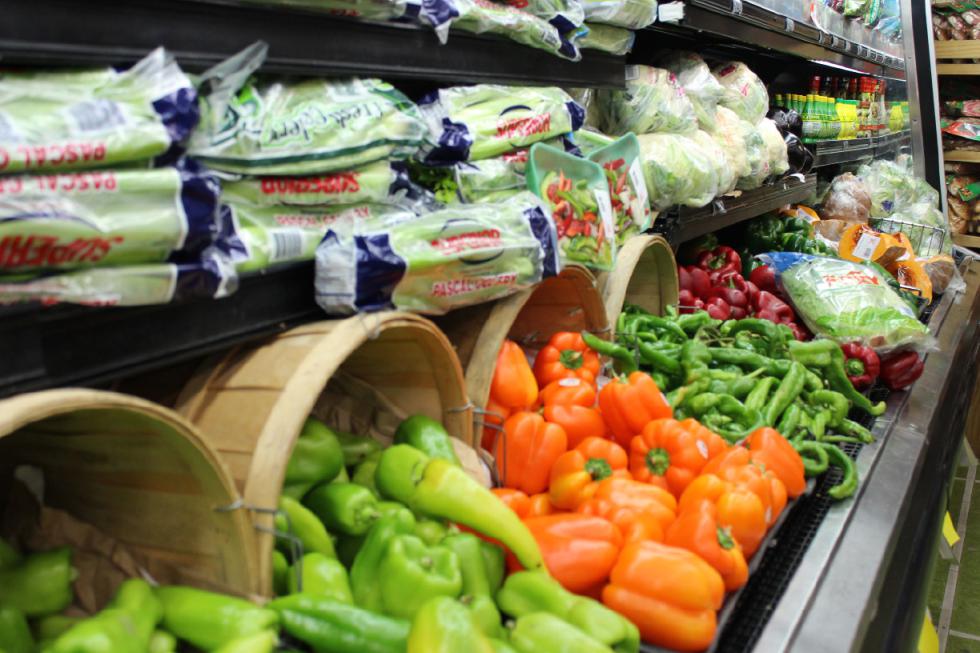 Ashley Christian makes one trip to the grocery store every month; it’s a carefully coordinated and premeditated affair.

She needs to buy foods that will still be edible at the end of the month, which means fresh fruits and vegetables are mostly out and frozen or canned produce is in.

She also has to make sure there’s no waste. Christian plans a month of meals for herself before shopping and purchases only the items she needs to cook them. Her freezer, she says, is full of meat she’s purchased in bulk.

To take that monthly trip to the store, Christian, 25, has to ask a friend or family member for a ride. It’s the preferred way to go shopping. Her other option is public transportation buses, which have three-bag per passenger limits. Christian can’t fit her groceries for a month into three bags.

“I learned from my mom,” said Christian. “It’s all about bargain shopping. My mom’s one of nine kids so they learned.”

Christian’s grocery situation isn’t unique for people living in food deserts — and Western Mass has quite a few. A food desert is an area in which fresh fruits and vegetables and quality meats are hard to come by — and if people do find them, the prices are often too high for the neighborhood. Neighborhoods in which food deserts exist are typically low-income with few transportation options.

This leads to many people in food deserts purchasing inexpensive, highly-processed foods at convenience stores and fast food restaurants. The poor nutritional value of those meals lead to health problems.

Food deserts exist in Springfield, but many other communities in the Valley as well: neighborhoods in Agawam, Westfield, Chicopee, Holyoke, Florence, Amherst, Greenfield, and Palmer also suffer from a lack of nutritional foods.

In Springfield, about 16,000 people live in a food desert, according to the Pioneer Valley Planning Commission’s Food Security Plan. Neighborhoods with food deserts include Bay, Pine Point, Metro Center, and Upper Hill. Nearly half of that population is low-income and many do not have cars, according to the U.S. Department of Agriculture Economic Research Service. Meanwhile, the rate of diabetes mortality is 25 percent higher in Springfield than in the rest of the state, and nearly 60 percent of Springfield’s children are overweight or obese, according to the Springfield Food Policy Council, a group working to make healthy foods more accessible in Springfield.

Christian lives in the Forest Park neighborhood of Springfield where fresh, healthy foods are hard to find and a little pricey, residents say. Christian’s monthly food budget comes from her disability check and food stamps. Many of the residents who talked to the Advocate for this story face similar challenges in obtaining nutritional food. So grocery shopping becomes a hunt for bargains.

Walking into 90 Meat Market on Wednesday afternoon, it’s so full of people it’s difficult to maneuver. The grocery stores are packed, people tell me, because it’s the beginning of the month and this is when WIC, food stamps, and other benefits are delivered.

Many people who have limited access to food said 90 Meat Market on Avocado Street in Springfield is a great place to stock up on inexpensive. Today it’s whole chickens and pork ribs, which sell for 99 cents a pound.

“I always have to bring her here,” said Briana Gonzalez, referring to her grandmother, who flits from cooler to shelf in search of the best price. “Right, Gram?”

Gonzalez brings her grandmother, Rosa Gonzalez, with her to the grocery store on her monthly trips.

Rosa, 57, reaches to the top shelf toward a large tin of galletas — Spanish for crackers. She rotates the container from below in search of a price tag. Not finding one, she calls out to the nearest employee. He responds with a price, and she scrunches her face. “I can find them much cheaper at Price Rite,” she concludes. By always looking for the best price, Rosa said, she can buy a month’s worth of food for about $150.

At Price Rite in West Springfield, Shavaughnya Smith-Jordan shops with her three children. As she tried to talk, they pulled at her sweater. “It’s terrible bringing them to the store because they ask for everything,” she said.

Smith-Jordan, 31, said they live in the Hill Micknight area of Springfield and, though the Mason Square WIC Office has been very helpful in providing resources for her and her home-schooled children, there aren’t many shopping options. “I would love healthier, more affordable options,” she said, adding that she only discovered Price Rite two weeks ago and it’s her new stop for fresh produce because, she says, it’s cheaper than at mainstream grocers.

When shoppers can’t grab a ride to a discount grocer, the nearby Food Zone International on Belmont Street is a good option. The shop provides a grocery delivery service for purchases of $50 or more. Last Monday, there was a line six people deep waiting with their groceries to get picked up by the service. Still, many residents say prices are higher at Food Zone than what they can regularly afford.

“The kids have school off tomorrow so I have to stock up,” said a mother shopping at Food Zone. She declined to give her name due to a domestic violence situation. The mother said she lives near the store and doesn’t have a car. Still she does most of her groceries shopping at Price Rite, which has locations in Springfield and West Springfield.

Waiting for the delivery van, she took a moment to gather her son, who was running back and forth at the front of the store, singing and chatting with everyone.

“Pull your pants up and stop acting like a monkey,” she tells her younger son. The older son stands in front of her, eating a yogurt, which drips from his chin. “Do you realize you’re getting yogurt everywhere?”

An employee emerges from the store. “Are they coming?” she asked, turning toward him. “I’m first in line.”

There are some people working to turn the Springfield food deserts into places where healthy food is available, but getting access can be a hard sell. Many grocery stores are unwilling to open a store in a Springfield food desert, as the Mason Square Food Justice Initiative — an agency under the Mason Square Health Task Force umbrella — has found. Grocers are often concerned that residents won’t spend enough money at the store to make it worthwhile, and they are also worried about violence. Last year, the Mason Square Food Justice team urged Mason Square residents to save and send their grocery receipts to the council for two months. The council tallied the money spent and uses it as an enticement for business. They collected 1,300 receipts totalling more than $50,000.

Meanwhile Frank Mangan, a professor in UMass Amherst’s Stockbridge School of Agriculture, is taking an immediate approach he is hopeful will lower diet-related health problems in Springfield. He is working with Food Zone on a project to encourage Latinos to make their own sofrito versus buying it in cans from corner stores. Sofrito is a blended mix of aji dulce peppers, onion, garlic, recao leaves, and cilantro. It’s a mix that serves as the base for many Puerto Rican and Dominican dishes. Mangan said Goya sells a sofrito by the can that is cheap and easy to use but it is high in sugar, sodium, and fat.

David Elvin, a senior planner for the Pioneer Valley Planning Commission, said the PVPC is working with the PVTA to increase service to and from grocery stores that provide fresh produce. He said the problem is that in pockets of Springfield, corner stores and convenience stores are the only option. Buying processed foods at these shops — too often in place of fresh fruits and vegetables, he said — is contributing to the city’s obesity and diabetes epidemic. He said that meetings with the transit authority recently yielded two new cross-town routes from the X to outlying supermarkets.

In the long-term, they hope to bring more fresh, affordable produce to these communities, but in the meantime addressing the city’s oft-used bus service is a big help. But there’s still that three-bag limit.

While people try to hammer out a fix for the food desert, those living in it are making do. Across the river, at the Price Rite on Boston Road in Springfield, people taking the bus to get to the grocery store and back find creative ways to get around the bus system’s three-bag limit. Some people put several grocery bags inside a larger tote bags to create three big bags instead of a bunch of small ones. Julio Sanchez of Dwight Street has his method of getting his groceries home on the bus down pat. He uses a dollie to transport the goods. A big box on the platform contains several bags and on top he’s strapped two full grocery bags. While waiting for the bus with a three-bagged friend, a taxi pulls up to the store.

“Too much money,” he said about shopping in a cab. Each PVTA bus trip costs $1.25, and a day pass with unlimited trips is $3.

Another rider said she normally walks to and from the store, but today’s groceries — brimming out of two large tote bags containing several grocery bags in each — look heavy. “I went a little overboard,” said Stephanie Rudd, 22. “So I have to catch the bus.”•

Correction: A previous version of this article erroneously reported that the 1,300 receipts collected from Mason Square residents were gathered by the Springfield Food Policy Council.