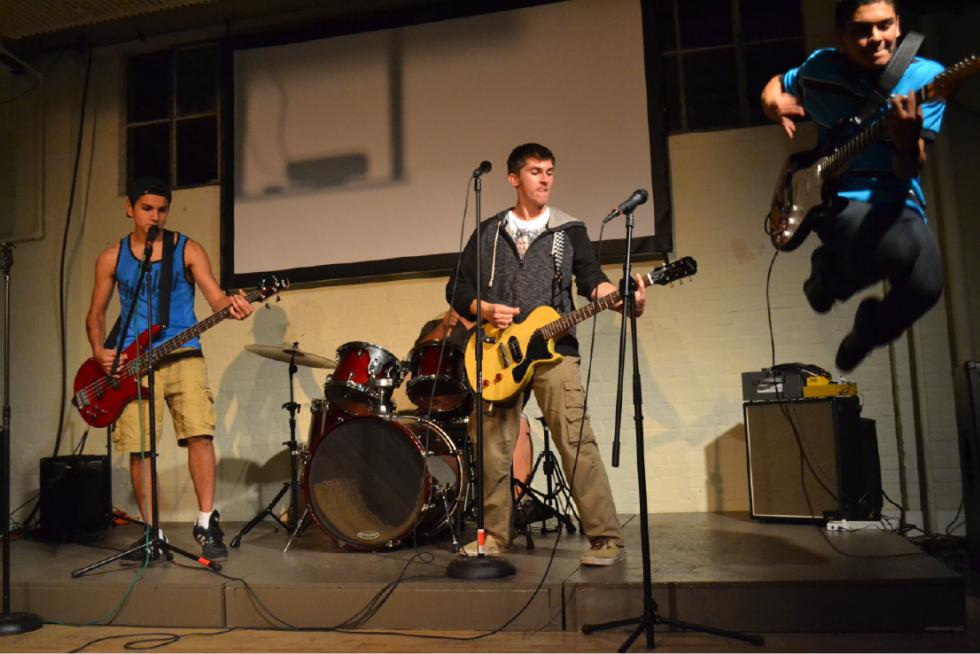 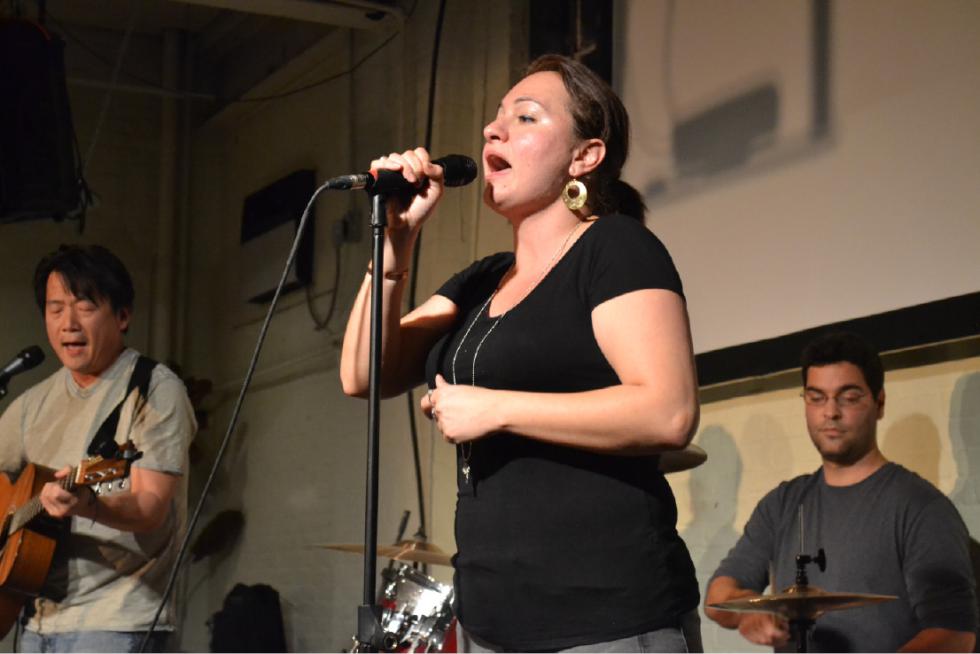 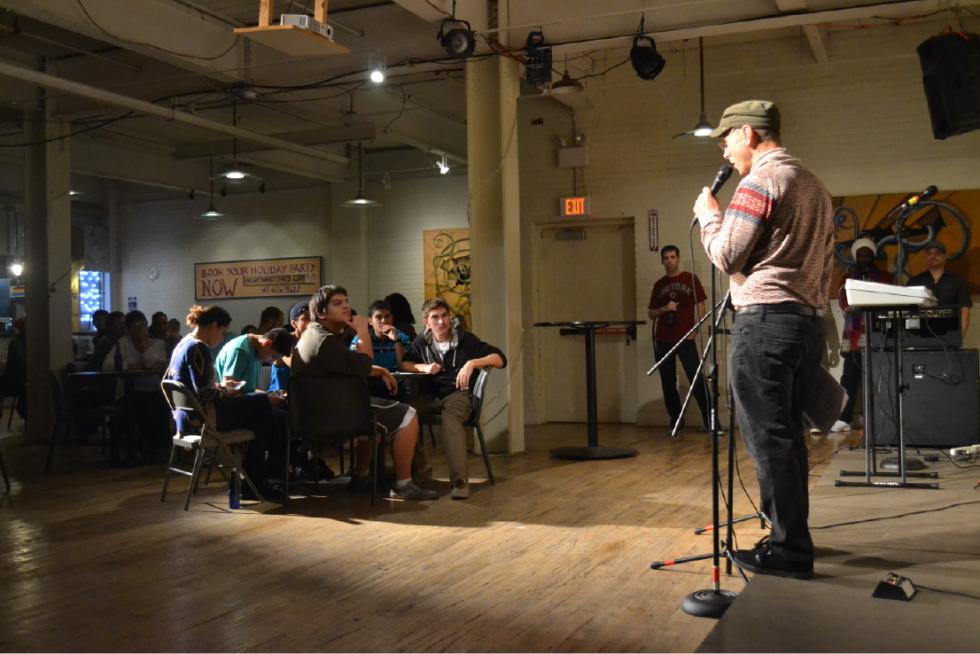 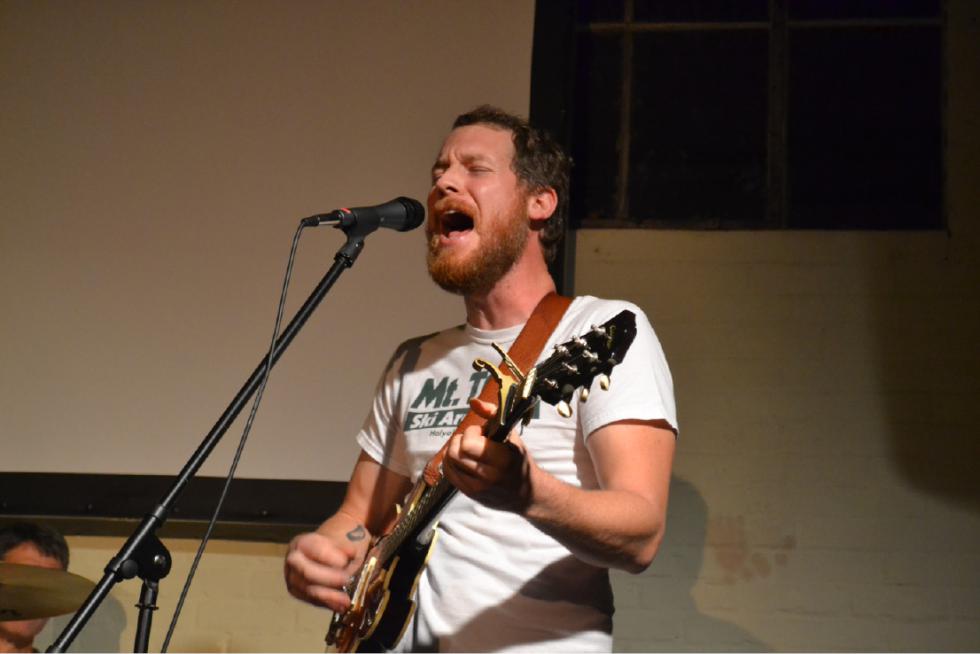 Donald Sonn strums his acoustic guitar and taps his microphone. “Can people hear me?” he asks.

I can, but I’m 10 feet away. Toward the back of the room, three dozen people are looking around and talking to each other, beers in hand. A few audience members are watching the band set up, but no one responds to Sonn’s question.

Next to him, singer Nadia Alahmad adjusts her mic stand. “That’s okay,” she says. “I’m sure this is how Oasis started out, too.”

In the sound booth at the back of the house, organizer Mark Sherry can be seen twisting dials and setting levels. After a minute, Sonn and Alahmad — with Dan Armenti on drums — are ready to rock. The Northampton-based trio call themselves Bad Tenants, and their 12-minute set on Friday night, Nov. 6, at Gateway City Arts in Holyoke earns them enthusiastic applause.

Bad Tenants is first in the five-band line-up tonight, part of a live music competition series that began in September. The Valley Talent Showcase is held on the first Friday of each month. The event, while judged, mostly manages a laid-back feeling of community. It is a contest, sure. But more importantly, it is a supportive, low-stakes nighttime hangout, created by the canal-side arts organization to give local artists some exposure, provide a space for friends and neighbors to eat, drink, and chill — and play a part in enlivening downtown Holyoke.

From the beginning of the evening, the mood in the big downstairs room is relaxed. Tonight’s judges — State Rep. Aaron Vega and musicians Charles Neville and Roger Salloom — sit with drinks and scorecards toward the back of the bright, clean event space, which features a raised performance area with stage lighting. At 8 p.m., as the house band Addis Revolution is setting up, about three dozen audience members have arrived, many of them band members and their friends.

Something smells delicious at Tiny Kitchen, the in-house restaurant in one corner of the room. I see bowls of pork ramen on tables, but the bartender tells me I’m smelling spaetzle mac and cheese with lobster. I grab a craft beer and marvel at how, from outside on dead-silent Race Street, an unaware passerby would miss the chance to enjoy a pop-up gourmet meal and get their fill of industrial-basement bar-schmoozing with local music scenesters.

Lori Divine and Vitek Kruta wander among the tables, small-talking and smiling. They are the founders of Gateway City Arts, which opened its doors in the spring of 2012. Kruta tells me that the showcase is a chance not only for the public to learn about talented local performers, but to help give those performers a platform to get the word out and, maybe, kick off their musical careers.

“Who knows who’s going to pop up?” Kruta says. “There are a lot of amazing local musicians, and we want to be a place where people can still be discovered — where you can go and hear progressive music and young talent. Places like that are disappearing left and right.”

Bad Tenants is one of those up-and-coming talents. After Addis Revolution plays a few enjoyably high-energy funk rock songs, Bad Tenants takes over and shifts the tone to something a bit more stripped-down. They serve up four songs — three covers plus an original called “Two Black Crows.” They play what band members Sonn and Alahmad call “homegrown eclectic blues pop with a dash of soul,” which comes off particularly strong on their rendition of “Dreams” by Fleetwood Mac.

Twenty or so audience members watch the band, nodding their heads. Another 20 are chatting over at Tiny Kitchen. The event, which might have felt a little too sterile, instead feels chatty and warmed-up, like an actual bar. For a venue that is working hard to shape a musical identity, this is encouraging to see.

A few minutes later, Bad Tenants are relaxing in the porch entryway out front. Depending on the night, up to seven people play in their band, which formed two years ago. So far, they’ve been performing at open mics.

“There’s so much musical talent around,” says Alahmad, who has lived in the area for eight years. “It can be intimidating, but it’s baptism by fire. You just have to get up there and have fun.”

Sonn says he grew up in New York City, but “the acts you see around here are as good as what you see there, and it’s more accessible overall. We really enjoy playing, so whether there’s nobody listening or 100 people listening, we’ll still be doing it.”

Inside, the pop-punk garage band Breadbasket begins their set. After a minute or two of overamplified noodling, they click into a fast-paced groove: pounding drums, growling power chords, and much shouting and jumping around. Their energy is turned up to 11, and no wonder: these four classmates are juniors at Holyoke High School. They just formed for fun, lead singer Will Hunter tells me afterward, and they’ll keep at it at least until graduation. After that, who knows?

The other three acts help to round out the night’s range of songwriting. From the Woods, based in Holyoke, plays an adept folk set, including what band leader Adam Braunschweig calls “a special treat for the over-30 crowd” (it’s “I’ve Been A Long Time Leaving” by Waylon Jennings).

They are followed by the Holyoke-based experimental alt-rock duo Man the Builder, which pedal-loops multiple guitars and harmonies to paint some really cool, schizo sonic landscapes. “Keep it rolling!” yells singer Douglas James in-between songs. “This is really the revival of Holyoke in this building right now!” Finally, just after 10 p.m., Springfield rock guitarist Patrick Vincent Deitner plays a solo set on behalf of his band Barn Spa.

At night’s end, the judges vote Man the Builder as the runner-up. From the Woods wins first place, which includes a few gift certificates from sponsors plus $100 in cash. Braunschweig takes the mic and announces that the cash goes toward paying off bar tabs, “but we’re gonna donate the rest to these kids.” He nods to the members of Breadbasket. “We need to keep kids playing music, and we need to keep music alive in Holyoke.”

As the audience claps and the members of Breadbasket shake hands and pat backs with Braunschweig and his mates, I grab Mark Sherry, who made it all happen. Sherry, an old friend of Kruta, joined Gateway City Arts in April. Quitting a career in teaching left him wanting to get back into the world of running nightclubs, which he did for years in Montreal, Boulder, and Denver.

“I can turn this place into a real happening night scene,” he says, grinning. “This whole area is coming together. We’re trying to spread the word that Holyoke is a place you can come and have fun.”

Sherry says he has contacted music schools in the area. He is seeking out bands on social media, and he has put up posters around the Valley. For future showcases, he has some ideas for theme nights: an LGBT band night in February, for example, and a kids music night later in the spring. He also wants to work more closely with Signature Sounds to help host musical acts that outgrow the label’s small Parlor Room venue in Northampton. Some nights will be acoustic. The number of bands that play may change. “It’s all evolving,” Sherry says as he sips his beer. “Whatever people like to come out for in Holyoke, we’ll grow into that and support it. There’s vitality here.”

The next Valley Talent Showcase is Friday, Dec. 4, at 8 p.m. A $3 donation at the door goes toward providing cash prizes to the winners.