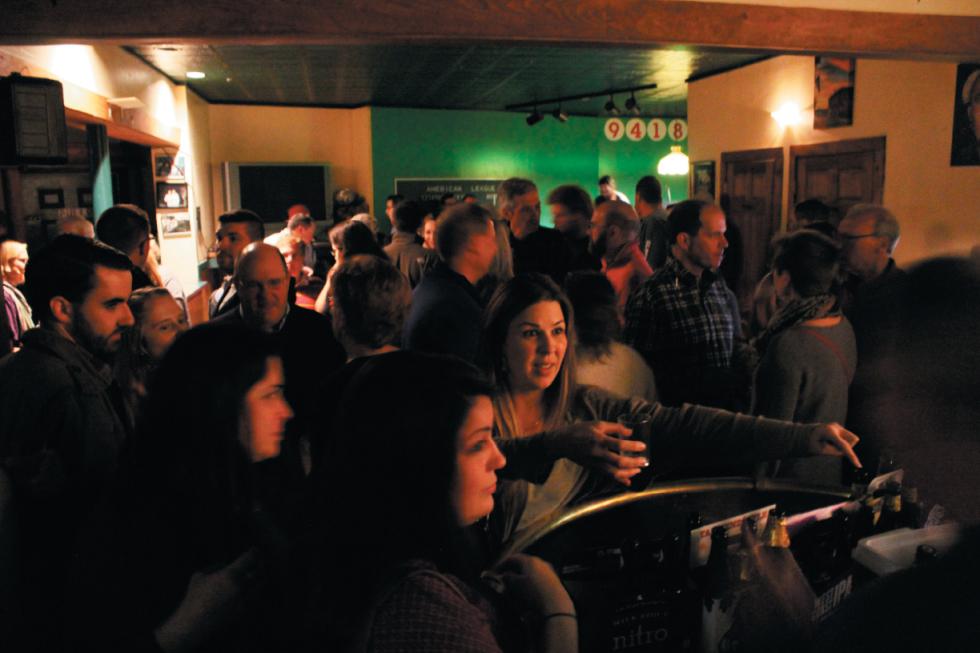 The holiday spirit arrives a bit early at Easthampton’s Keep Cottage Street Lit event at the Brass Cat.
On this recent Wednesday night, the packed pub is a unified wall of happy noise as revelers clutch stemless, child-sized glasses and mill around the beer-tasting stations, pointing out this moment’s choice. The glasses and the portions may be small, but moving quickly from beer to beer, those attending get their adult-sized fix. Proceeds raised by the $10-tickets go toward Cottage Street’s annual tree-lighting installation — “something pretty simple, but something that makes a statement of who we are and the ambiance that we wish to set,” writes one of the organizers, local real estate agent Peter Davies, on the Facebook event page.
Placed around the pub are four tables with four or five beers to sample on each. Abandoned Building and Fort Hill — two Easthampton breweries — are here pouring tastes, as well as Williams Distributing Co., a Chicopee-based distributor providing samples of brews from places such as Harpoon and Crispin. Local restaurants Amy’s Place and La Casita Azteca pitch in with snacks — wings, chips and guacamole — early in the evening.
With people moving from one station to the next, everyone’s bouncing off each other in the packed bar like quarters off a table. “Excuse me,” one woman says to another, smiling but not yet looking at the person she’s attempting to push past. “Oh, Marcia! It’s you!” The women embrace.
It’s quite possible the entire town of Easthampton is here. Leather-clad dudes and tattooed metal fans bump elbows with city councilors — one of which, Jennifer Hayes, steps behind scenes to help tend bar. The music, barely audible amidst the din, is a mix of well-known tunes by Johnny cash, John Taylor, and the Rolling Stones and every now and then I catch a stray conversation about what an awesome place Easthampton is, and how it’s definitely “on the rise.”•