Raise Your Glass (Ceiling): Where are all the women brewers? 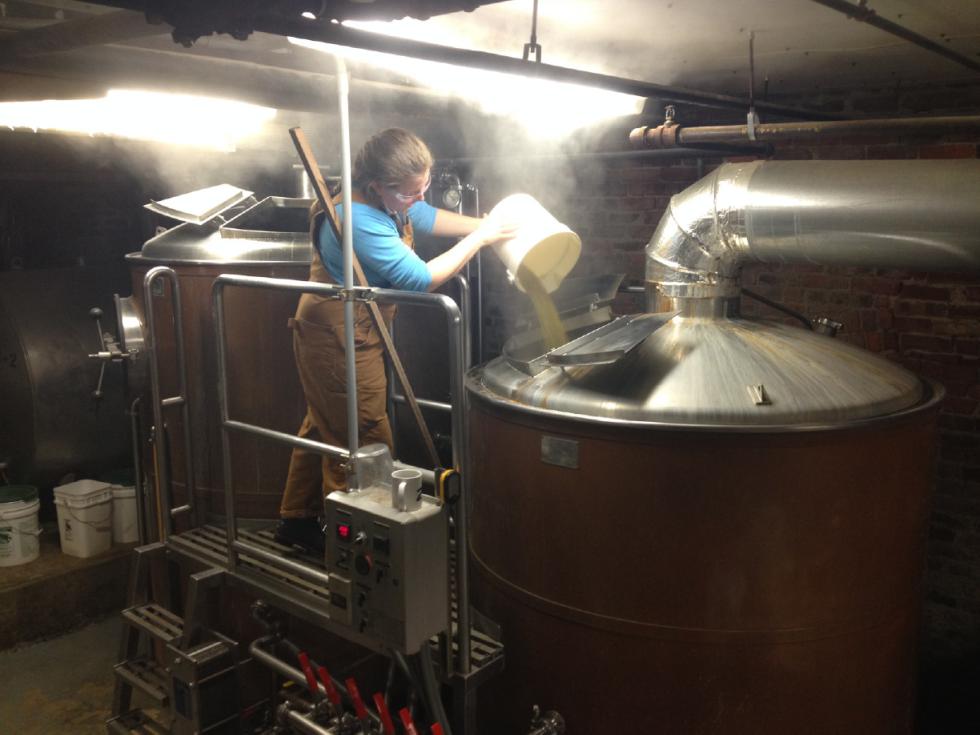 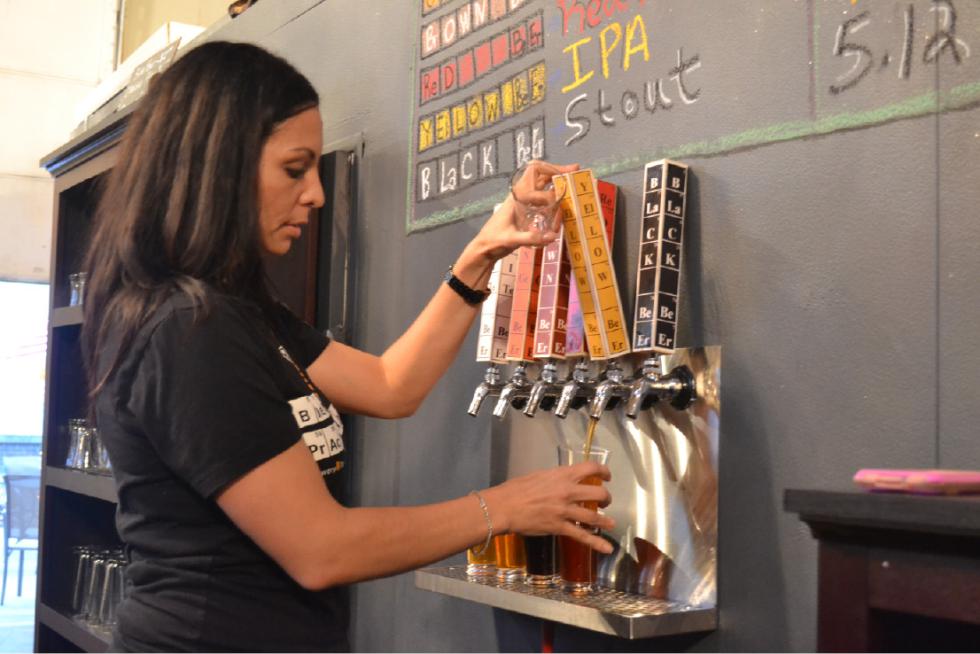 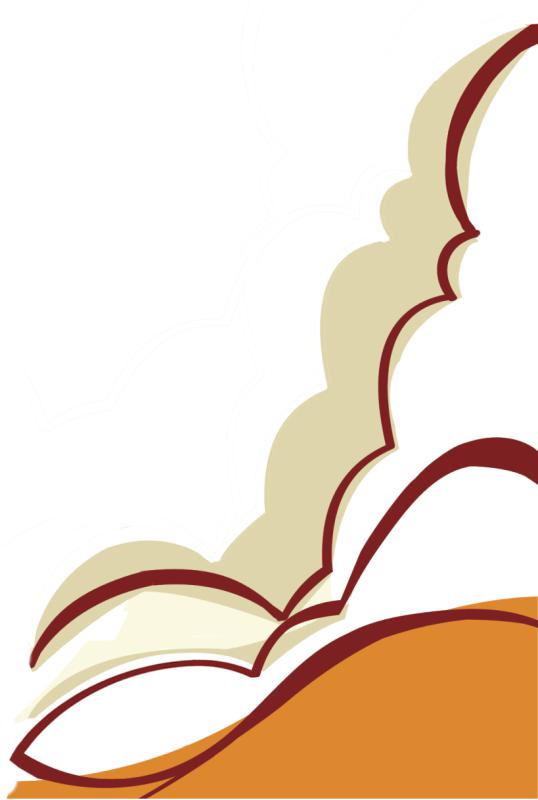 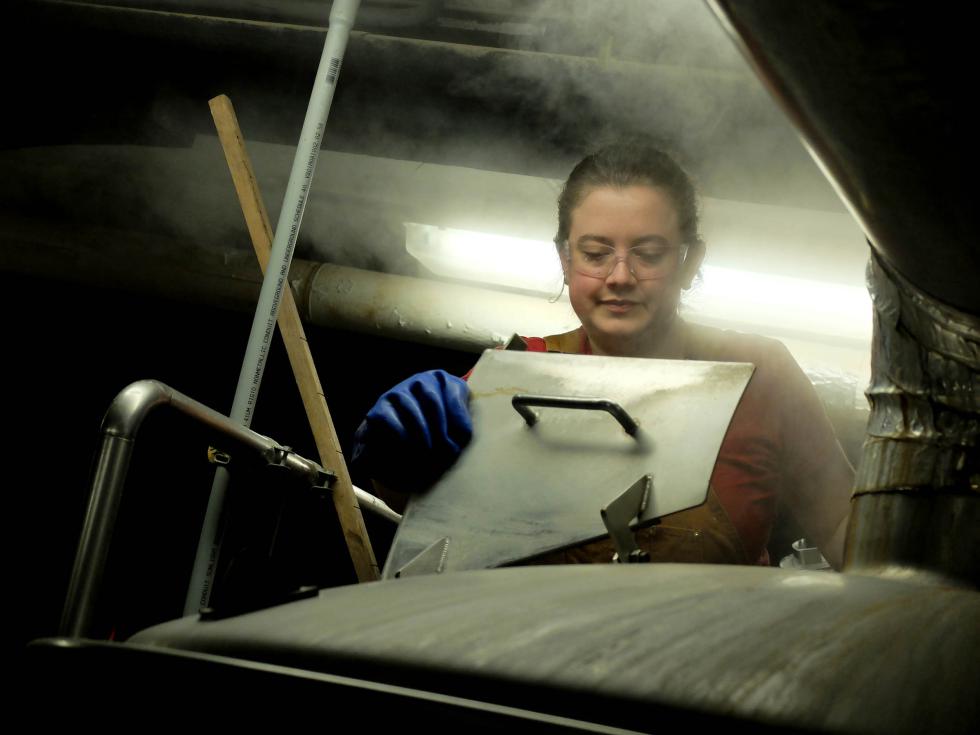 Two years ago, Kate Telman started making beer at her home in Easthampton. She planned to perfect a few brews, then shop her skills around to area breweries in the hope of getting a job.

“I knew there weren’t really any job postings for what I wanted to do,” said Telman, 29. “I just had to get in with the brewers.”

While meeting with brewers and passing out samples, Telman would bring her husband for moral support.

“Almost everywhere we walked in, everyone assumed that he had made the beer, and they talked to him like he was the one applying for the job.”

The gender gap at craft breweries — especially on the production end — may be closing over time, but right now the breakdown of men and women in the brewhouse is far from equal. Last year, when Stanford University researchers Sarah Soule and Shelley Correll combed through national brewery statistics compiled by the Brewers Association, they were able to figure out the gender of select employees at 2,536 out of 3,464 U.S. breweries. They found that 20 percent of American breweries have at least one female founder, but only 4 percent have a woman working as head brewer or brewmaster.

The trend, while discouraging, isn’t shocking — breweries are far from the only American workplaces where women more often get hired into administrative positions than into jobs requiring physical labor. “The data backs up the assertion that it’s a heavily male industry,” said economist Bart Watson, who works for the Brewers Association in Boulder. “Anecdotally, I think it’s changing for the better, but women still have fairly little representation.”

This wasn’t always the case. In Colonial America, before the industrialization of beer, a good portion of home brewing was done by housewives and tavern-keepers, many of whom were women. But times change. Following Prohibition, marketing campaigns for mass-produced beers focused almost exclusively on men in their 20s and 30s. Just watch a few MillerCoors Super Bowl ads to see how little that’s changed.

If there’s opportunity for leveling the playing field, it’s in the world of microbrewing, where over the past 25 years the personalities and skills of individual beer makers have played a large role in building unique brands.

That’s what Kate Telman enjoys about the People’s Pint in Greenfield, where she now works as the assistant brewer. Telman accepted a job offer from head brewer Chris Sellers in August 2014. She started out packaging bottles and doing odd tasks. Every few weeks, Sellers taught her something new about brewing. In January, Telman started to help with the brewing, and in March she brewed her own recipe: a maple brown ale that the Pint sold on tap in the dining room.

Telman majored in chemistry at Mount Holyoke, and she had been steeling herself for a career in the sciences, “where there aren’t a lot of women, especially at the top.” But now she’s chosen a new course for herself: she works four days a week at the Pint, brewing, transferring beer between tanks, bottling and packaging, and hauling hoses and 50-pound bags of malt.

“Who needs to go to the gym anymore?” she said. “They pay me, and I get a workout. But that’s why it’s so great here. They just assume that I can do everything they can do.”

Telman was craving the chance to live her life like that old Army slogan: “Be All You Can Be.” But that’s easier said than done, especially for women. Tanzania “Tanzi” Cannon-Eckerle, one of the founders of the Brew Practitioners brewery in Florence, said she learned this during college, when she tried to join the United States Marine Corps.

“I scored high, and in 1994 they were recruiting hard, but I didn’t sign on, for one reason. They told me I couldn’t fight on the front line,” she said. “That offended me. So I said no, I’m not doing it.”

She pursued other interests, including a career in finance and law. About 13 years ago, she started homebrewing with her husband Joe. “Historically, yes, beer has been branded as a men’s drink,” she said. “But I’ve never really taken gender roles to heart.” Now Cannon-Eckerle is the assistant brewer, general manager, and majority owner of Brew Practitioners, which opened Oct. 10.

“There are a lot of women bakers and chefs,” she said. “Beer is the same — there’s a beauty and chemistry to it. As all these new breweries open up, and more people are exposed to the industry, I think more people will see this as an art form for everyone, and take pride in it.” Out of Brew Practitioners’s six additional founders, three are women. Two of them are mother and daughter, both of whom live (and homebrew) in Tanzi’s home state of Indiana.

When the group gets together, they sit around and talk beer. That’s part of the legacy Tanzi envisions for her 12-year-old daughter. “We give them the love of this, and they give this to their daughters,” she said. “To us, it’s fun and beautiful.”

Christine Heaton, the head brewer at Big Elm Brewing in Sheffield, knows this all too well — the first word her daughter spoke in daycare was “brewery.” Heaton, 40, co-owns Big Elm with her husband Bill and another couple. Beer has long been her passion, and she has diplomas — from brew schools in Chicago (the Siebel Institute of Technology) and Munich (Doemans Academy) — to prove it.

“Back in 2001, when I was going around applying to jobs and cold-calling, I got a lot of doors slammed in my face,” she said. One big reason was her lack of experience. But during those early days, she believes her gender played a significant factor as well.

“I feel like it affected me a lot,” she said. “I was in my mid-20s and not really understanding why I was being treated differently. I was getting frustrated.”

Six months into her first real brewing job at Victory Brewing Company in Pennsylvania, she said, her co-workers told her that they were pleasantly surprised they hadn’t had to carry her weight.

“I guess that was a compliment, but it was hard to take it that way … That just comes back to the stereotype,” she said, adding that she was the only woman brewer working there at the time. “They clearly felt a bit of angst about it.”

Still, she feels more women are due to come into brewing. “The playing field between male and female brewers has definitely leveled out quite a bit,” she said. “I think it’ll keep happening. Any industry that grows as quickly as craft beer is going to diversify.”

That growth in the market is no joke. Beer sales in the United States equal the sales of wine and spirits combined, and in 2014, according to Nielsen research, women consumed 32 percent of all American craft beer.

When it comes to fair representation of women brewers on staff, the past decade has brought significant improvement. Teri Fahrendorf, the founder of the Pink Boots Society for women beer professionals, remembers taking a road trip back in 2007 to visit 70 breweries. She had been working as a brewmaster since 1988, but two decades on, she found that “nobody was talking about women in beer.” Most female brewing staff she met along the way hadn’t heard of her, “but they were intrigued. They thought of this as a cool job, but not necessarily a career. They asked me: Are there other women brewers? I said, I don’t know, but I’ll try to count them up.”

Fahrendorf spent the next five months putting together a contact list of women brewers. By trip’s end, the list was 60 names long. This contact list morphed over time into the Pink Boots Society, a volunteer nonprofit that provides forums, scholarships, and networking opportunities around the country.

Any woman can join the group, on one condition: she needs to make some amount of her income from beer-related work. That includes brewers, but also beer writers, lab technicians, managers of packaging lines — you name it.

“We get emails from home brewers who really want to join but can’t, because they’re not charging money for what they’re doing,” Fahrendorf said. “I’m like: why not? People will pay to learn from you. Go out and sell your services!” Membership hinges on this income requirement, she explained, because “throughout history, women have been the volunteers. We’re not getting paid. But our society only values work through income. You can do five different kinds of volunteer work, and people will still call you a stay-at-home mom.” Last year, the Pink Boots Society had about 1,400 members. This year, it has about 2,400. Fahrendorf says she’s now seeing 150 women joining every month.

“Women were the first brewers,” she said. “We’re just taking our place beside the men. Eventually, we won’t be a novelty anymore.”•