The Magical Mountain Mystery Tour: What craft beer adventures await in the Berkshires? 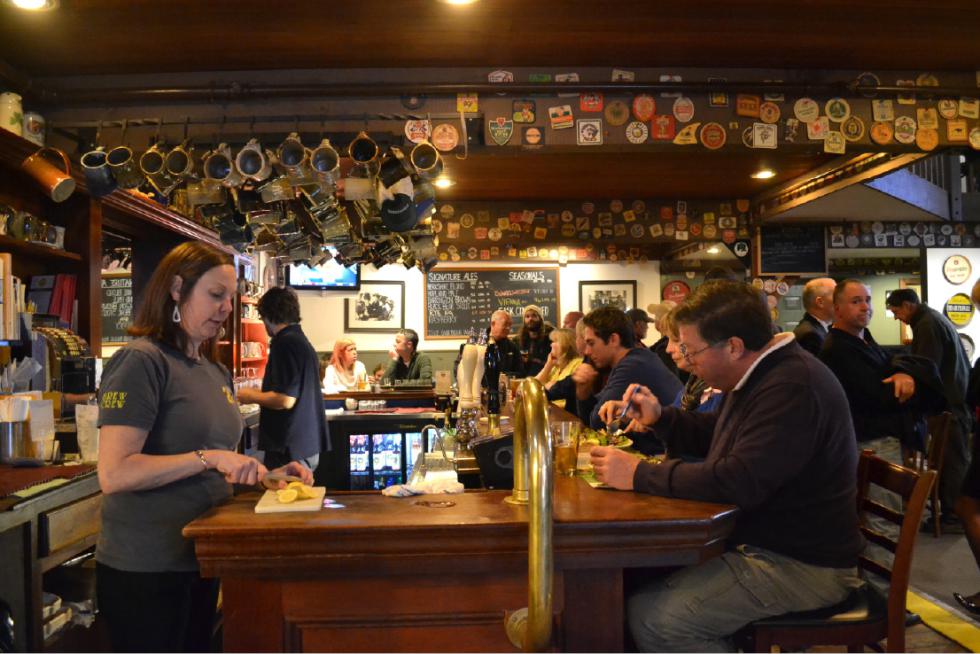 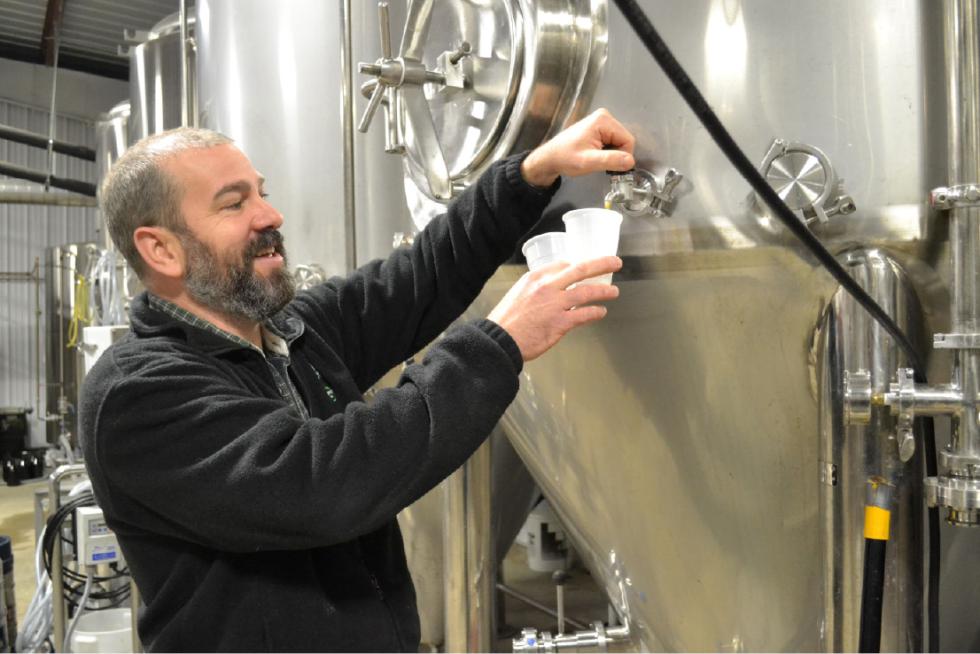 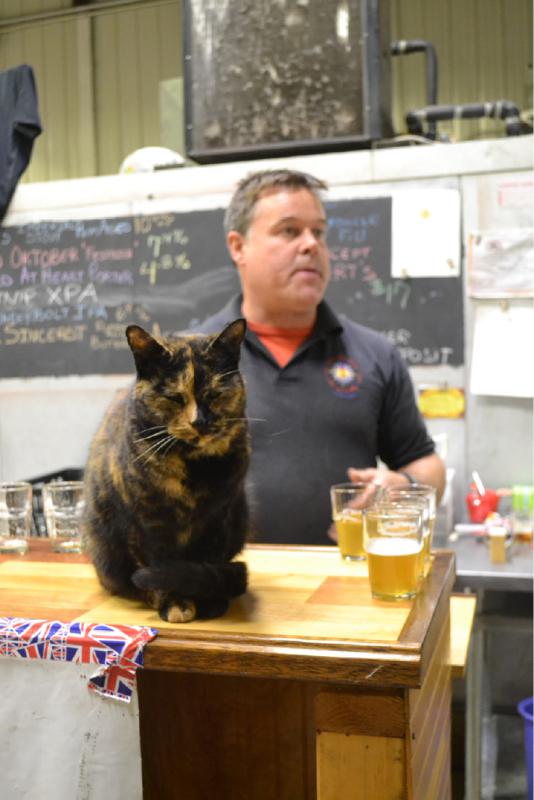 As the Advocate’s resident Beerhunter, my reportage on the art of the local craft brew has taken me up and down the Pioneer Valley, with the occasional stop in Brattleboro, Boston, and beyond. But there’s one big region on the Western Mass beer map that I’d been overdue for a tour through: Berkshire County. I set out to remedy that.

Berkshire County has some good craft breweries, although not in such a high concentration as in the Valley. Actually, there are three: Wandering Star Craft Brewery in Pittsfield, Big Elm Brewing in Sheffield, and Barrington Brewery & Restaurant in Great Barrington.

For my Saturday day trip, I stopped in at each of them, starting in Pittsfield. As far as brew scouting goes, I pulled a real hat trick: all three establishments, while set on different missions, succeed in making enjoyable (and in a few cases, downright genius) craft beers.

The drive out to Pittsfield along Route 9 is quintessential Berkshires: scenic views of preserved forest land, with quick dips into quiet towns of under a thousand people. Even after I had arrived in Pittsfield, I found Wandering Star to be an out-of-the-way destination, tucked onto a discreet side street between the highway and the railroad tracks about two miles from downtown.

I stepped out of my car and walked up to the old factory building, wondering if my journey was ending before it had begun. Aside from a custom-made weather vane on the roof and a logo painted on the parking lot asphalt, nothing advertised that we had come to the right place. The banged-up, paint-splattered front door — on which was taped an 8 ½-by-11 welcome sign made with a color copier — didn’t do much to assuage my doubts.

Which may be why the high-quality beer at Wandering Star took me by surprise. Founder Chris Post is a stellar brewer, with help from his wife Shannon, and the 10 beers I tried showed off remarkable creativity and consistency.

Fuggle the brewery cat sat on the tasting counter and blinked lazily at me as I raised my eyebrows in delight 10 times in a row. I don’t remember ever being impressed by a flight from beginning to end. Without exception, Post’s beers show off great flavor, from light to dark.

His Zingari Witbier is a delicious, zingy riff on the Belgian Wit style, infused with lemons, oranges, and cardamom. The Champ de Creux Saison blends wheat, rye, and barley malt with European hops and Belgian yeast, which makes for a lush, slightly tangy farmhouse style beer. The Red Oktober, made with Vermont hops but brewed like a traditional German festbier, is full-bodied and assertive — the liquid equivalent of your loud-mouthed, warm-hearted friend who loves biergarten parties.

Those are all rich and drinkable, but a few of Wandering Star’s beers really blew me away. The Dizzy Blonde is an excellent, well-balanced summer ale that drinks like a crisp lager. The Thunderbolt IPA eschews the bitter, piney profile typical of today’s craft IPAs in favor of a slightly sweeter and more mellow, biscuity flavor — almost like graham cracker.

The Bert’s Disqualified Imperial Stout, aged for five months in rum barrels, is a lip-smacking knockout. Even their limited-release pumpkin beer is wonderfully dry and subtle, rather than overly sweet (it’s actually made mostly with butternut squash, roasted here in the brewery with maple syrup).

Overall, these beers are on the strong side — the Bert’s is 10.5 percent ABV, and the Mild at Heart Porter is the only offering under 5 percent ABV.

As of now, the brewery, which was founded in 2011, doesn’t sell cans or bottles. Aside from local bar taps and draft contracts at two New York City restaurants, the only way to get your hands on some Wandering Star is to stop by the brewery for a sample flight or a growler fill. Just be sure to time your visit right — the tasting room is only open from noon to 3 p.m. on (most) Saturdays.

“I was sitting on a trading floor in New York 10 years ago, hungover and looking for homebrew equipment,” explained Chris, who used to be an investment banker. “Someone listed a whole brewery’s worth of equipment for a ridiculously low price. Clearly, I was hungover enough to bid on it.”

So he stepped up his game from home brewing to commercial brewing, taking courses with the American Brewers Guild. A few years later, he was confident enough in his abilities to take the equipment out of storage, truck it to Massachusetts, and set up shop. Thank goodness he did.

My day trip was off to a good start. With a smile on my face — and a growler full of imperial stout tucked under my arm — I headed south on Route 20, down the central spine of Berkshire County, to Big Elm Brewing in Sheffield. The drive took about an hour, since Sheffield is what people around here refer to as “south county,” just a few miles from the Connecticut border.

As with Wandering Star’s nondescript railyard setting, the building that houses Big Elm — a former plastic molding company — is nothing sexy. But in the tasting room, which is open Saturdays from noon to 4 p.m., it’s easy to get comfortable at one of the small tables — especially when the room is full with about two dozen laughing, chatting visitors, as it was midafternoon when I stopped in.

Big Elm, now three years old, is a bigger operation than Wandering Star: eight 30-barrel tanks rather than two, four of which Big Elm acquired this year. Now that they’ve signed with a distributor, which will push their beers further across the state, business here is scaling up.

“We’re all about volume,” co-owner Bill Heaton told me. “We make five or six brands, and it goes right out the door. A lot of great places do small, experimental niche-y stuff, in sexy bottles with corks, but that’s not us.”

Big Elm makes some seasonal varieties in 22-ounce bottles, like their upcoming annual imperial stout called Dead of Winter and its bourbon barrel-aged cousin Undead of Winter (plus a new project from that same batch, flavored with espresso, called Waking the Dead). But the company spends most of its time canning mainstays like stouts, IPAs, and farmhouse saisons. The result, across the board: appetizing takes on traditional styles.

Bill’s wife Christine is the head brewer here, but Bill knows his stuff as well — he worked as head brewer at Victory Brewing Company in Pennsylvania for years. He pours me a taste of 413 Farmhouse Ale, made with Belgian yeast, which tastes a bit citrus-y, with a lot of fruity aroma. The secret source of that smell: whole-flower chamomile, five or six pounds of which goes into each batch.

The Lion’s Amber Ale is an easy-drinking English amber, similar to an Old Speckled Hen. The brewery originally created this one for the Red Lion Inn in nearby Stockbridge, but it has also become the most popular growler fill in the tasting room. And Big Elm’s IPA is equally good. Unlike the Wandering Star IPA, this one leans piney and more bitter, but it’s still smooth and palatable at about 7 percent ABV (and this year’s Fat Boy Double IPA is due to hit shelves any day now).

Bill also poured me a sample of American lager. “Almost nobody makes light, American-style craft lager, because there’s nowhere to hide,” he said. “You can bash Bud, Miller, and Coors all you want, but they’re the most technically advanced brewers on the planet. To make a light beer is really difficult, because any flaw will shine bright.” Knowing that, I can vouch for Big Elm’s even-keeled and tasty version, made with corn grits, which shows no trace of acrid off-flavor.

“We’re slowly trickling out of Berkshire County,” Bill said. “We still can’t make enough beer, which is a good problem to have. We keep adding tanks, and then we just sell more beer locally. But soon, you’ll see more of us.”

My third stop, at Barrington Brewery & Restaurant, gave me a chance to soak up all that delicious beer with some hot, hearty bar food. This third and final stop on my trip was a well-timed respite, and I was happy to grab a good early dinner while getting in some people-watching.

The brewpub, which is just off Route 7, opened in 1995, but its owners upped their game in 2008 when they added a large solar hot water system to their facility, making them the only spot around to have “solar brewed beer.” What they brew these days is solid and agreeable, but nothing on offer reinvents the craft beer wheel.

I try a flight of beers amid the happy clamor of the bar area. The Rye IPA sets the theme for this stopover: not especially remarkable, but tasty and smoothly made. The Black Bear Stout goes down easy without making much of an impression. The malty Barrington Brown and the wheaty Berkshire Blonde are a little two-dimensional, and they finish thin. The Hopland Pale Ale makes somewhat more of an impression — again, no fireworks, but it has a nice rounded flavor and some subtle full-bodied sweetness.

It’s a bit unfair to use the craft beer yardstick to measure up Barrington Brewery’s beers against Wandering Star and Big Elm, since many brewpubs take a more workmanlike approach to making approachable, unfussy beers for local drinkers (the Brewers Association defines a brewpub as a restaurant-brewery that sells 25 percent or more of its beer on site).

Which is why, despite the fact that a Valley-based beer traveler shouldn’t take a Berkshire day trip solely to visit Barrington Brewery, this fun, casual eatery should definitely figure into end-of-day plans for a good meal and a chance to unwind with an additional pint or two. The brewpub is open seven days a week for lunch and dinner.•