Stoneman Brewery is a Beershare Off the Beaten Path 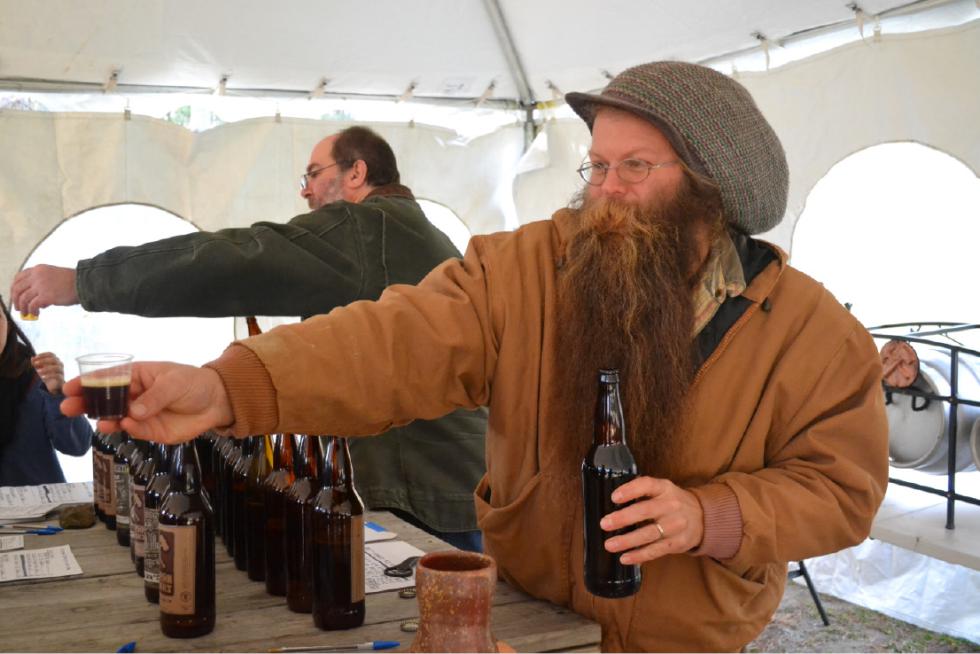 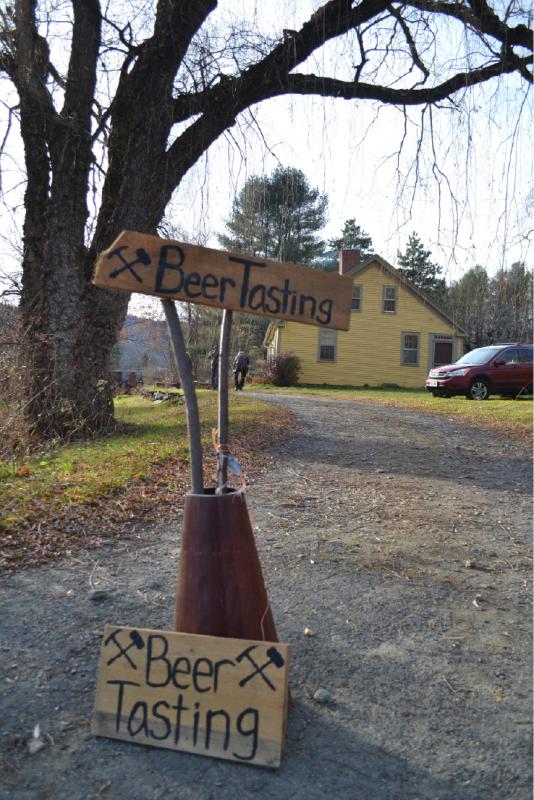 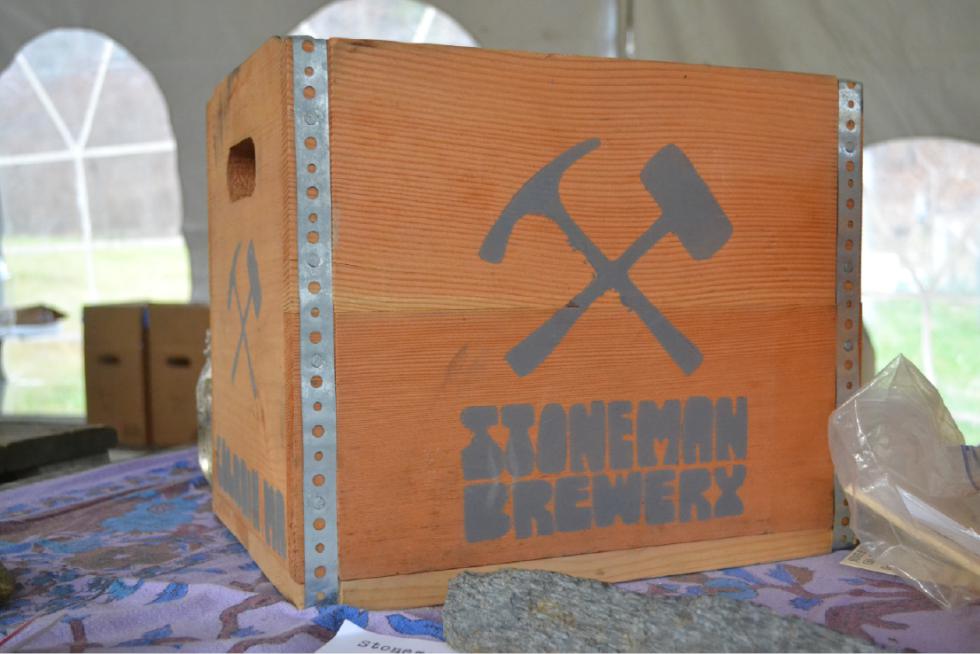 I drive until I lose cell service, then I keep driving. Downtown Colrain falls away behind me as I follow the North River up into the wooded hills. I park my car on a quiet road, two miles from the Vermont border, at Justin Korby’s house.

Colrain’s small population is spread out — about 40 people per square mile. It’s the kind of lovely, near-silent landscape you see in spy movies, when the feds come knocking on a cabin door to coax out their best secret agent for one last mission. The hero comes to the porch, sporting a beard, and growls: “I’m retired.”

Korby, 37, is one of local craft beer’s secret agents (and he’s got the beard to prove it). He runs Stoneman Brewery in the backyard of his 74-acre farm. He operates one of the only beer CSAs in the country, providing members with new varieties of beer on a monthly basis.

Membership in the CSA isn’t cheap, but to me, it seems fairly priced. For $400 recipients get a dozen 22 ounce bottles each month for six months — that’s 72 bottles total, which is roughly $5.50 each. If that hurts financially, it’s only twice a year — and then you’re drinking the good stuff for weeks.

At the monthly beer pick-up, members mix and match whatever they want. And we’re not talking just a few styles. Last year, Stoneman’s tiny one-barrel brewing system put out 43 different beer varieties. That may seem counterintuitive, until you realize just how small-batch this operation is. A barrel is about equal to 30 gallons. Once that’s gone, Korby makes something else — or brings back a favorite by popular demand. Flexibility is the name of the game.

On this Sunday, Korby’s hosting a tasting that happens to coincide with an annual studio tour run by Crafts of Colrain, and the backyard is humming with activity. Korby, plus family and friends, pour small samples from 16 different bottles.

A tour of the brewery takes 20 seconds. In the front room of a small shack — which is half-filled by a hot water tank — there’s a mash tun and a boil kettle. Korby turns around. “Well, this is it.”

Through a window on the back room, eight stainless steel one-barrel fermenting tanks are visible. Since most beers take about two weeks to fully ferment, Korby can do up to 16 batches of beer each month.

After the CSA orders are filled, he often has beer left over, which is why he began distributing bottles to a small number of local retailers. But his heart is with the CSA and its roughly 50 members.

Korby says he started Stoneman two years ago because he wanted to be “the neighborhood brewer.”

“My members come over, hang out, and tell me what they want. It’s really fun.”

Members are mainly local, but some come from as far away as Connecticut. Many of them also home brew, and sometimes Korby will collaborate with them on one-off recipes. A one-barrel system also allows for low-risk experiments in partnership with other breweries, he says. “We can really mess around.” These monthly play dates, which he calls the Beer Share Series, have enticed brewers from BBC, Brewmaster Jack, Abandoned Building, and others up to the farm to share and tweak recipes.

One recent example: a collaboration with the People’s Pint in Greenfield that combines head brewer Chris Sellers’s recipe for Farmer Brown with Korby’s recipe for Ghost Hog Imperial Brown. The result, called Ghost Farm, is currently aging in bourbon barrels, and it will be available on tap at the Pint around Christmas or New Years.

Korby is a perfectionist, and it shows: His beers, which are all unfiltered, are fresh, balanced, and smooth, made with nearly all local ingredients — most of the grain comes from Valley Malt in Hadley, and the hops come from Four Stars Farms in Northfield.

I try a really good white currant saison, made with 50 pounds of berries from Bug Hill Farm in Ashfield. That Ghost Hog Imperial Brown ale, nearly 9 percent ABV (alcohol by volume), is lip-smackingly rich, but goes down easy. The Beezerker Braggot is also on the sweet side — it’s a wonderful, tangy cross between a mead and a beer, made with Belgian golden yeast and farm honey from Deerfield.

Stoneman hops, skips, and jumps all over the beer spectrum. King Korby Imperial Stout is tremendously roasty, yet silky smooth. Alt Joe, a dark-red German-style ale, is assertively malty. The IPAs win out as well: the West Coast-style Jolly J IPA is the hoppiest, while the Red Eye IPA is more balanced, but both pack a full-bodied punch.

“The new craft beer scene is about always wanting to try something new and different,” Korby tells me. “Making a huge variety is a lot more work, and using all local ingredients costs twice as much. But you have to work at something you like. As long as I can pay my mortgage and buy some food, I’m good to go.”

∎ White Lion Brewery, based in Springfield, has just released its new Blue Eyed Black IPA. The beer is a solid and enjoyable example of this dark, malty IPA style, and at 6 percent ABV it’s rich and hoppy without going overboard. This is the fourth beer by White Lion, which was founded in 2012, after the brewery’s pale ale, cream ale, and red ale.

∎ Northampton’s Brewmaster Jack releases a new beer this week as well. Their Tennessee Prinse, a quadrupel ale at 11.5 percent ABV, is aged in Tennessee whiskey barrels. It’s a riff on their Prinsipia Quad, released earlier this year. Pick it up for a strong, delicious bottle with notes of cherry, plum, toffee, and vanilla.

∎ How much would you cough up for Sculpin IPA? Constellation Brands is willing to pay a billion dollars. The company, which makes Corona and Modelo, announced on Nov. 16 that it would be acquiring Ballast Point Brewing in San Diego for $1 billion. The latter, which was founded in 1996, has been going like gangbusters — they’re likely to sell nearly 300,000 barrels of beer next year.•