Scene Here: Smith College Sit-In, Where is my utopia? 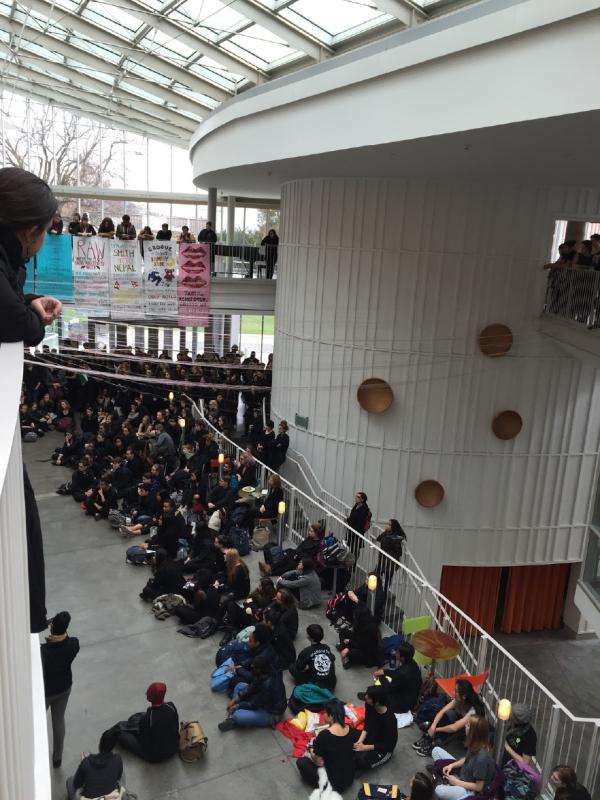 The Smith College Campus Center, a futuristic white building that rises over the campus like a spaceship, is full today. Where students usually walk through a mostly empty atrium, today almost every inch is packed, students and community members sprawling over floor space, leaning on blankets and backpacks. A standing crowd forms near the front doors; people lean over the sides of the upper mezzanine and the stairs. In one of the glass-walled conference rooms along the atrium, a professor is apparently holding class. Almost everyone is wearing black, except the class of elementary and middle schoolers who enter about an hour into Smith’s Sit-In in Solidarity, an expression of unity with the anti-racism protests going on at Mizzou, Yale, Ithaca, Amherst, and other colleges across the nation. The mood is solemn; people are quiet, even though there must be over 200 crammed into the space. The student organizers of the sit-in have ceded the floor to any students of color who wish to speak, and many do; the speakers are sad, furious, hopeful; many choke out words through tears of pain or frustration. People snap their fingers in response, sometimes applauding. On a TV near the back, news coverage plays quietly but audibly, delivering breaking news under an art installation banner that reads “slut.” Another monitor shifts through idyllic images of Smith’s campus. Again and again, students of color express their feeling that Smith College has not been what was advertised, that they do not feel safe or supported, that they are disappointed. The young woman standing next to me softly whispers, “Hello,” every time someone takes the microphone. A speaker who identifies herself as Ari says “Smith only wants perfect students who are not going to tell them they’re wrong. Smith doesn’t want questions.” Another speaker recounts struggling with institutional racism and mental illness, finishing with, “Smith’s going to give me my goddamn diploma!” The room erupts with applause.
A common thread runs through the speeches: students thought Smith was going to be better. It wasn’t. It isn’t. It should be. In front of the monitors displaying ivied academic buildings, a student stands up and says, “Where the fuck is my utopia?”
It seems, from the stories of student after student, recounting instances of racism, fear, pain, and disappointment, that the answer is still “no place,” at least not yet.•
— Emily Atkinson, emilyhelenatkinson@gmail.com