We’re All Diva’s Now: In the new era of queerness, can Northampton’s historically gay nightclub dissolve its old labels? 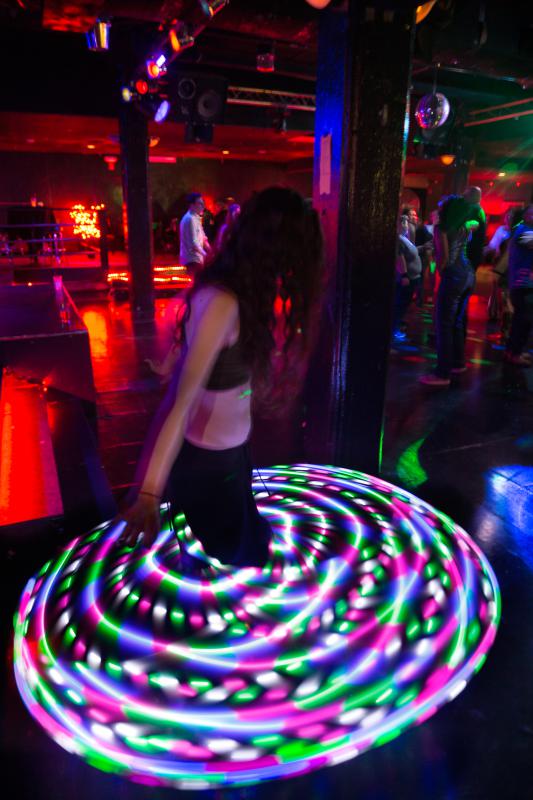 DAN LITTLE Kim Knowlton, of Northampton, spins on the dance floor with an illuminated hula hoop at Diva's Nightclub Saturday night in Northampton. 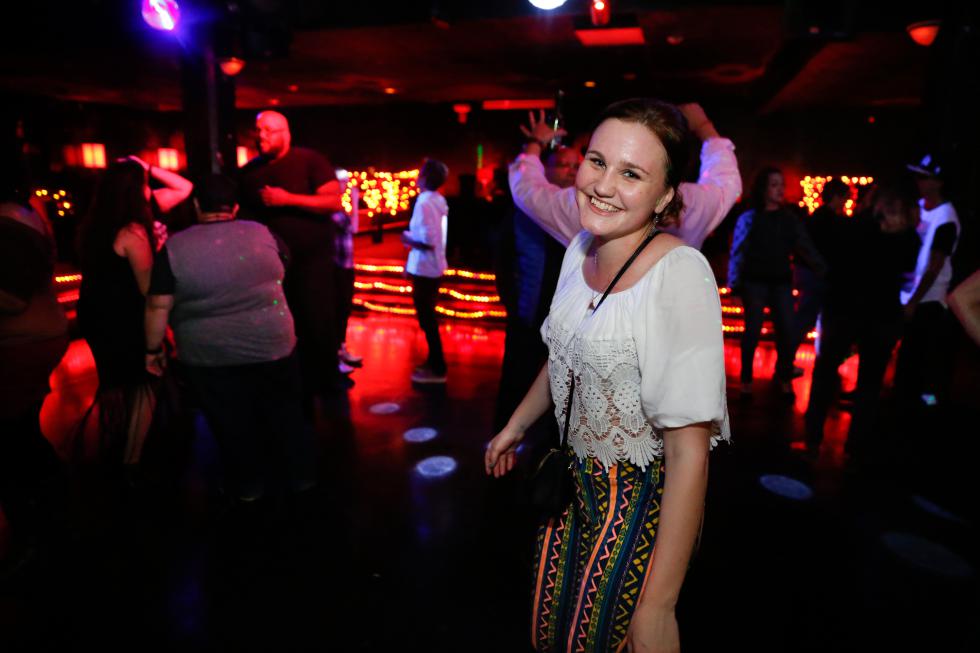 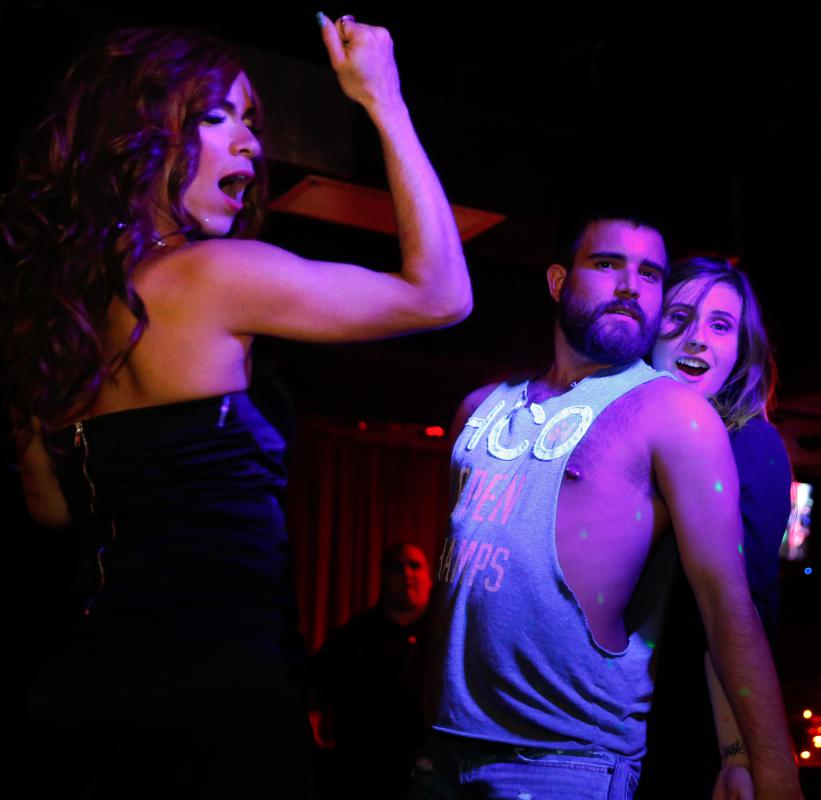 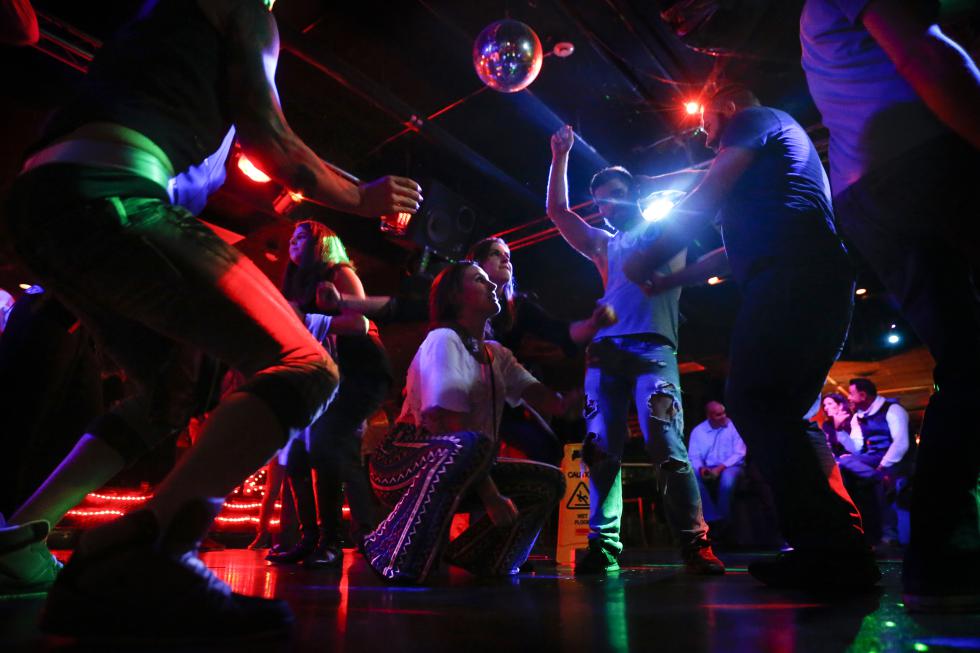 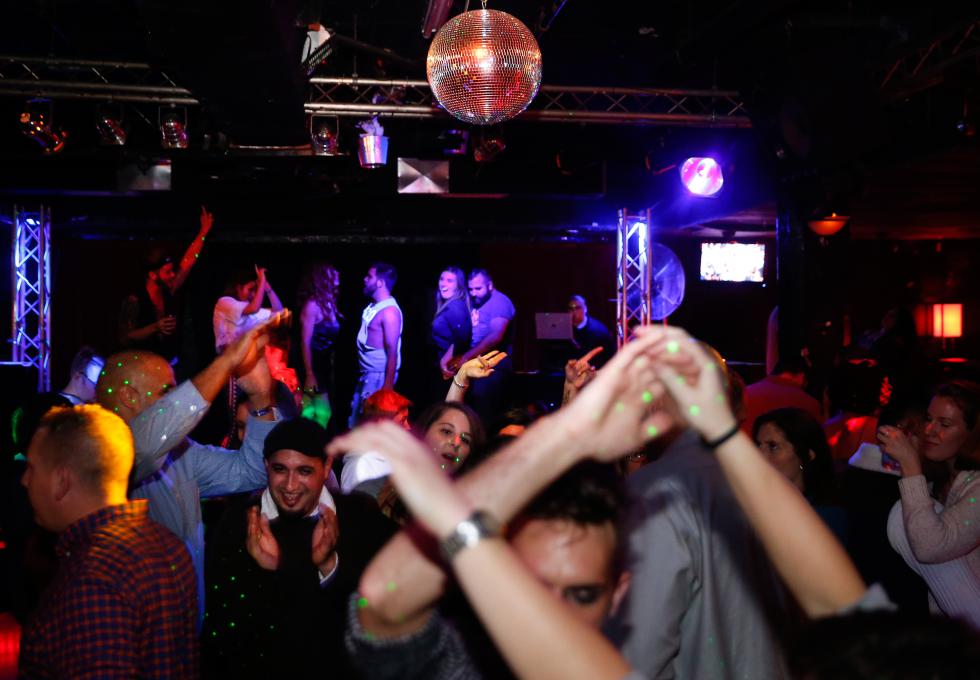 Surrounded by bodies, soaked in sweat and blasted with music, it’s easy to let go and just dance. If you’re not a denizen of the club scene (or if it’s been a few decades), glance at the faces and free-flowing forms of the dancers we photographed on a recent Saturday night at Diva’s nightclub in Northampton. After 15 years, it’s still one of the only spots in the Valley to get the true dance hall experience.

On a good night, you get lost in the lights, and the house beat in your chest is a physical force. These are the nights that Lori Conte, the owner of Diva’s, loves most.

But they’re not all good nights, especially lately. Over the last few years, attendance has fallen at Diva’s. That happened in large part after October 2013, when local nightlife icon and house DJ Otis Sears, Jr. (aka DJ Otis) passed away. Some friends of the club kept returning after that, but many of the beloved DJ’s followers dispersed.

Conte, who founded Diva’s in 2000 as nightclub for the LGBT community, was left with a challenge and an opportunity: rebooting the business to appeal to a new generation of patrons. That’s a challenge for clubs, bars, and businesses that have historically attracted customers based, at least in part, on gender and sexual orientation.

The labels and terms that Americans use to describe themselves, including their romantic and sexual identities, is shifting at high speed. A couple of recent online surveys conducted by YouGov have found that young people are identifying themselves as heterosexual less than older generations. According to the 2015 study, 24 percent of people ages 30 to 44 said that they’re somewhere on the scale of bisexuality, while only 8 percent or fewer of people over age 45 did. Overall, 33 percent of Americans surveyed said they are not 100 percent heterosexual.

For the most part, cultural barriers are dissolved more often than they’re erected. But fresh questions and uncertainties arise. In May, one month before the Supreme Court resolved to extend marriage rights to same-sex couples, author and filmmaker John Waters used his commencement speech at the Rhode Island School of Design as a call for graduates to “refuse to isolate yourself. Separatism is for losers … Gay is not enough anymore.” In order to survive, Diva’s needs to take this mantra to heart.

“We have to be ahead of the game and see that things are changing,” Conte says. “You can’t be the same club you were five years ago. A lot of gay and lesbian clubs all over the country have closed. So we have to merge with the community and say: You’re welcome. Come share our space.”

Across the country, historically gay clubs like Diva’s are pondering this task. But what does it mean in Northampton, where progressive thinking is already a way of life? Is Diva’s ahead of the curve, or behind it? And what will it take to draw crowds once again?

Twenty years ago, when Michael Kusek’s out-of-town friends would ask him where Northampton’s gay bar was, he would answer them honestly: “Well, they’re kind of all gay bars.”

“That’s always been the case, but in the mid-90s, or even 2000, that was kind of a foreign concept to visitors,” he said. “You could go anywhere and be fine. It eliminated the pressure to find — or to be — the gay bar in town.”

These days, Kusek, 47, is the publisher of Take magazine based in Northampton. But he used to DJ “Boys Night Out” on Tuesday nights at the North Star Seafood Bar on West Street. In 1995, the space became The Grotto, a predominantly gay-identified bar. It’s where DJ Otis rose to popularity, and when he became the house DJ at Diva’s, many of his fans followed him across town to the new venue.

“Otis had a posse,” Kusek remembers. “He was a wonderful, hilarious personality. A good nightlife needs Pied Pipers, and he was one of them.”

The Grotto closed in 2002, which made the still-new Diva’s the only full-time gay establishment in town. On the last night of business at the Grotto, Kusek sat atop the bar with friends and reminisced for hours. Gay clubs are great, but on nights when you’re not looking to dance, a gay corner bar can be just as special.

In Northampton, a bar or club doesn’t succeed if it’s not inclusive, Kusek says. That’s why his tagline to the King party series, which he ran at Bishop’s Lounge for five years beginning in 2010, was: “For men who like men, and the people who love them.” I asked Tom Doherty, the former co-owner of the queer-friendly Easthampton nightspot Popcorn Noir, about this notion. He supports it wholeheartedly. It’s the vibe he strove for at the movie lounge on Cottage Street, that later became the Platinum Pony, which closed due to fire earlier this year.

“The Pony was truly queer,” he said. “It was for everybody. You walked in and you really didn’t know who was gay, straight, bi … There was just a presumption of safety and welcoming.”

Doherty, 42, moved to the area in 1994. Even as recently as last year, he found that using the word “queer” around people in their 50s and 60s could lead to a scolding, given the term’s disparaging use in previous generations.

“It’s a recent thing,” he said. “Queer, to me, is not a sexual orientation. It’s a mindset. It’s a way of looking at the people around you with a common understanding. It’s an alliance.”

“Queerness is everywhere,” agreed George William Myers, 35, a local DJ and co-owner of The Quarters arcade bar in Hadley. “It’s not a single identifier, and it’s not the most helpful tool for businesses to reach out to people.”

Spaces that are specifically identified as queer, in the broadest sense, are important for community building and a sense of personal security, he said. “But you’re going to have to be more nuanced and creative than that with your programming. If you’re a queer microbiologist, or you just want to watch the Royals game, you’re not looking for a sign that says: ‘Come Be Gay Here.’ You have to go deeper than that.”

It’s the same thing I heard from Gabriel Chevalier, 22, a queer student at Mount Holyoke. She goes out in Northampton all the time, she said, looking to spend time with the 21-to-30 crowd. She especially likes grabbing a drink at The Dirty Truth, then dancing at the Basement or the World War II Club.

“The places I go aren’t inherently gay or queer,” she said. “But if I’m going with a group of four or five friends, and the majority of them are queer, that becomes a queer space.”

Easthampton resident Keisha Moore, 39, who is gay, tends to dance at the Platform Sports Bar when she goes out in Northampton. “It’s crazy,” she says. “You walk through all these jock types who are sitting watching sports, and then in the back room you’re dancing with a bunch of Puerto Ricans, African Americans, and gay people. It’s great — you’ve just got to get through that area with big brute guys and girlfriends in stilettos. People just want to go out and have a good time.”

John Arvanitis, 23, of Northampton, had a different take. He also prefers bars to nightclubs (he can often be found getting a drink at Hugo’s). But if a Valley nightspot marketed itself as a queer space, as the Platinum Pony did, “I’d certainly consider that spot as the first place to go out.”

It’s a good reminder that, despite all the cultural walls coming down, we are all still in need of communion with our peer groups, as mixed-in as they might seem with everyone else.

Andrew Denney, 30, said it succinctly: “I think that 18-year-old queer boy still needs to be able to go into a club for the first time and see two men kissing. That moment is still so important.”

Now comes the hard part: raising awareness in the Valley that Diva’s no longer emphasizes LGBT labels as it did in years past.

For that, Conte has brought on Cris Gazzara, 30, as the club’s new Saturday night event coordinator. (Diva’s has pulled its programming back, for now, to two nights a week: Latin music Fridays and Just Dance Saturdays.)

Gazzara earned a name for himself collaborating with DJ LeFox for the Sugar Biscuit dance parties at the Basement, and with local drag queen Hors D’oeuvres, who runs Bon Appetit Burlesque and the drag singalong Maim That Tune at Diva’s. He first came to Diva’s when he turned 18, and became a regular at the club while in college.

“Diva’s knows its history and its past,” Gazzara said, and described a need to balance special themed events with an overarching feeling of inclusiveness. “People who are supportive of gay people don’t want to feel separate and different, either. There’s huge potential for people to just meld together as a community and have a great time.”

In Northampton, that message rings loud and clear. But Diva’s is a cavernous club — 8,000 square feet — and it has long depended on visitors from Springfield, Amherst, Connecticut, Worcester, and beyond. One refrain I heard over and over from people this week: the fact that a decent headcount at the Basement, or even Hinge, adds up to a pretty quiet dancefloor at Diva’s.

“People have a very static way of thinking about Diva’s, and they’re not entirely wrong,” said Gazzara. “Even in 2011, you could find 500 people in this place on a Wednesday. Absolutely, things have changed. It’s a small town — everyone knows it.”

Conte and Gazzara are trying to take that challenge one step at a time — starting with the cutback to two nights a week. “That way, there’s more potential to fill the club and use the rooms better,” Gazzara said. “This place is really versatile in ways that people haven’t seen in a long time.” Diva’s became 21+ this past June. It will continue programming drag events, but those shows will begin earlier in the night on Saturdays, as a lead-in to dancing rather than a finale. The club is also about to revamp their Facebook page, making it easier for patrons to interact, become VIPs, and get cover-free access.

It will take trial and error. There is no magic equation to fill the dancefloor at Diva’s. But year to year, Northampton’s nightlife transforms. Conte just might get her wish: that we’re coming into a time in America where the thing that matters most, really and truly, is to just dance.•