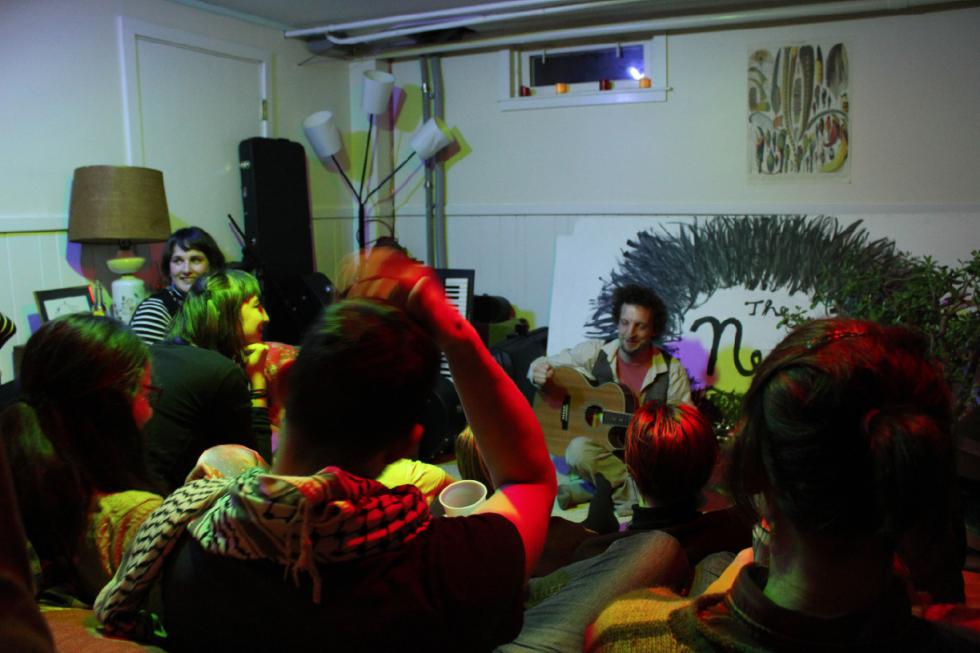 Outside the Nest, a house/underground music venue on a side street off Belchertown Road in Amherst, a cloud of smokers greet me. I follow the train of people kicking off their boots and shoes at the bottom of the basement stairs where a living room and kitchen make up one large room. The table and counters are packed with delicious-looking food. The Nest’s shows typically start with a potluck.
“Dinner is an integral part of The Nest community,” writes host Emma Ayres on the Facebook event page.
Ayres — who introduces herself to the audience of 35 as tonight’s curator — is an artist who teaches at Enchanted Circle Theatre in Holyoke and waits tables at the High Horse in Amherst. She lives in this basement apartment with two others.
“If it’s your first time Nesting,” Ayres tells the crowd, which laughs, “we do this twice a month.” It’s not a rager, she tells us, but a listening-oriented event intended to provide a supportive environment for artists. Tonight is the Nest’s sixth event.
Wishbone Zoe kicks off the night with some indie folk rock. Her fingers fly over her banjo’s strings and she shrieks out a chorus that is both angry and sweet. Hearing her cries, Dandy the pitbull runs from her owner’s side to the performer’s aid. Laughter fills the room and worry leaves the pup’s face as she returns to her owner.
Candles line the windowsill behind the carpeted area that serves as the stage. Three silver studio lights hang from the ceiling, their wide brims each containing bright red and green bulbs.
Singer-songwriter Avi Jacob is up next. His face is solemn as he sits on the floor with his guitar. “Friends try to make each other better people,” he says. “A lot of times I think that’s good, but other times I think we just get down on each other.”

“You’d rather eat my heart than elevate my soul,” Jacob sings.
“Is there a beautiful person here named Carl?” asks Ayres, introducing the next two-song set.
“I’m not even dressed, yet!” says a young man in the crowd who must be Carl.
“Chris Kerrigan, will you play something?” Ayres calls out to one of the lead singers in Bella’s Bartok (pictured above).
“Yes!” calls Kerrigan from a neighboring couch. “I have to pee and I need whiskey, but yes!”