What’s that big glowing building on I-91? 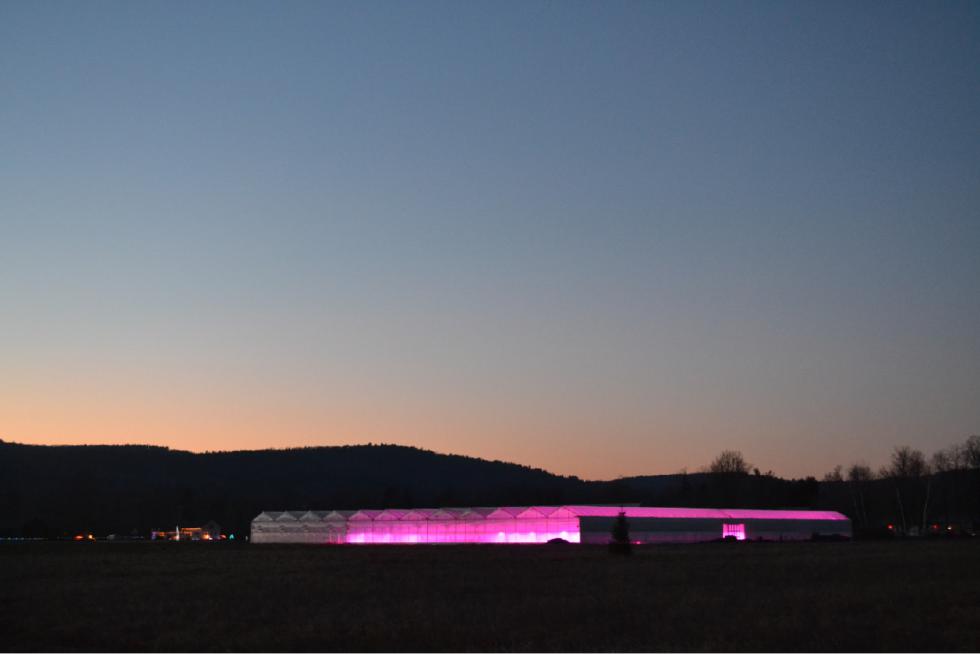 Like many local drivers, I take Interstate 91 up and down the Valley several nights a week. So I have had plenty of opportunity to wonder: what in the intergalactic hell is going on near exit 24? Drive south for a mile and a half past the Whately Diner, look to the right, and the sight you see is otherworldly: a roughly 45,000 square foot facility with semi-transparent walls that emit a flood of bright, violet light.

The building stays lit all night. From the north wall, clouds of steam escape into the outside air. If you get closer — like along routes 5 and 10 — you can make out long tables inside. Maybe I’ve become a little too excited about the return of The X-Files to TV this January, but I couldn’t help but wonder whether this unmarked compound plays host to something top-secret.

Black-ops alien bunker? Paranormal research center? Or maybe just a new nightclub, where Whately’s farm families can get out at night for a good, sweaty rave?

The truth, it turns out, is simpler than all that — if you call biochemical innovations in agriculture simple. Our alleged Area 51 is actually part of Nourse Farms, and that purple lamplight is shining on fledgling strawberry and raspberry bushes.

So, sorry UFO conspiracy theorists: this installment of The Uncanny Valley is rooted firmly here on Earth.

Although, interestingly, there’s no earth involved — these plants mostly grow without soil. For 35 years, Nourse Farms has been using a technique known as tissue culture to grow select breeds from cloned samples of meristematic berry tissue, each about one millimeter thick.

These teeny-tiny tissues are cut from previous iterations of the plants using a dissecting microscope, scanned for viruses at the company’s diagnostic lab on nearby River Road, and interred in basins and tubes of nutrient-rich gelatin. It is here, at this eerily-lit grow house, that they mature to full size.

“I think we’re one of the first entities in the U.S. doing tissue culture in strawberries and raspberries,” Nourse Farms owner Tim Nourse told The Recorder in March. “The whole concept and the propagation of the plants has probably allowed us to stay in business and maintain our competitiveness and growing quality.”

Don’t lose your hats, hippie-crunchy friends and neighbors. This story is not the Gattaca of fruit. There’s no playing God here, no synthetic screwing around. Nourse Farms has been doing it this way for 35 years (the process was originally developed by orchid breeders in the 1950s), and it is what has made the company a major regional grower of strawberries and raspberries, with distribution throughout the East Coast, the Midwest, California, Canada, and Mexico.

It’s pretty cool science. Just don’t go nosing around the property playing Mulder and Scully. The greenhouses are fitted with sensors that trigger when a door is opened. The state-of-the-art gear is required as part of the farm’s certification with the state Department of Agriculture, so that these test-tube berries grow up to be big and strong, untainted by outside air. In here, only the good stuff shines — no Smoking Man allowed.