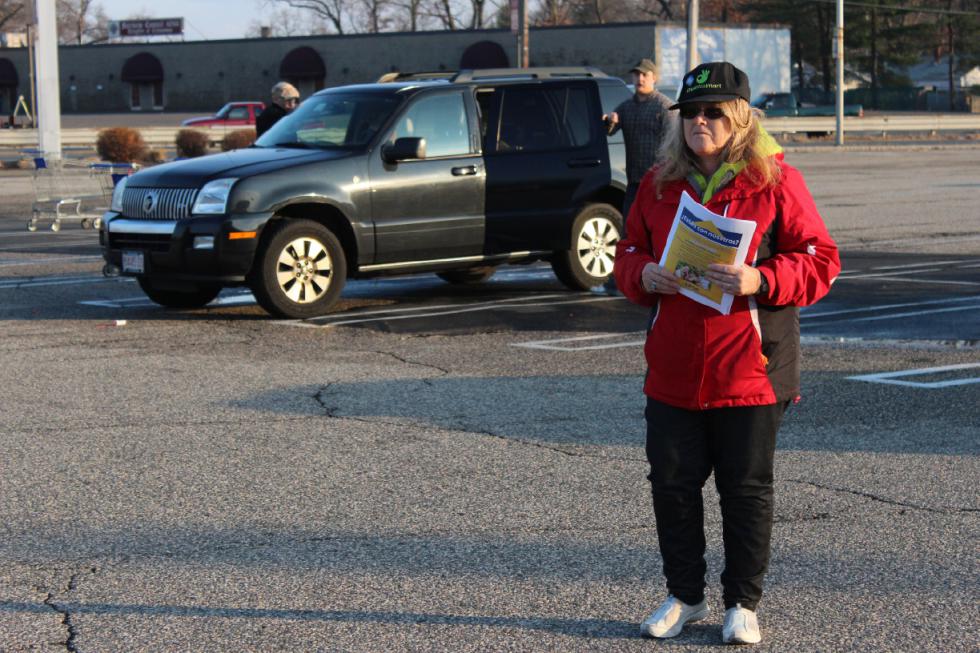 At Price Rite in Chicopee on a recent Thursday afternoon, the rally is in action. A man wearing a vest with Bernie Sanders buttons and Jobs with Justice pins approaches my car. I roll down the window at his polite but persistent behest. He hands me a piece of paper and smiles as I park.
I get out of the car, but it seems I have already witnessed the full extent of the rally. Four people are passing out the same pamphlet I picked up through my car window. “Are you with us?” the paper asks in big, bold letters. “All across the country, hard-working men and women have joined together speaking out and calling on companies like Price Rite to do the right thing.”
The rally, which takes place in the parking lot in front of Price Rite and then in front of Springfield and Chicopee Walmarts later in the afternoon, was announced via email.
“Irresponsible companies like Price Rite and Walmart are hurting hard-working families with low wages, a lack of benefits, and inadequate schedules,” writes Western Mass Jobs with Justice coordinator Jon Weissman in an email blast.
I find Weissman standing about 20 feet from the Price Rite entrance. He is handing out papers, which direct receivers to sign an online petition in support of Price Rite workers.
“Can I give you a pamphlet about Price Rite workers’ rights?” Weissman asks one woman on her way into the store, as a uniformed officer stands watch from the doorway. The woman accepts the paper, straining her eyes to read the words as she approaches the doorway.
“He’s here because we’re here,” Weissman says, looking at the officer. “That’s not normal.”
Few cars and people come into the lot, so when they do, the four reps from the UFCW union make a beeline for them. “It’s not busy today,” says Weissman, with an expression of mild disappointment that is quickly overtaken by enthusiasm for the rally to follow at Walmart. “But we’ll be able to give all these away at the next stop,” he says, waving a still-hefty stack. “We’re lobbying to do this on a Saturday.”
Today’s rally is “a steady, monthly activity-builder” intended to encourage Price Rite workers to unionize.
One of the volunteers, Aubretia “Windy” Edick, fights back rage after she tries to hand one man a paper and he responds by saying, “If they want more money they should get a real job.”
The volunteers say that typically their biggest challenge at this store is that Price Rite clientele are commonly low-wage workers in the same position as the workers inside, and that all such workers are united in fear of backlash if they take a stand. Edick, who was fired from Walmart last year after getting involved with the union, knows this all too well.
“For some of these workers,” she says. “Unionization is the last civil right exercised in an environment of terror.”
About every ten minutes, a gigantic plane — and an accompanying wall of sound — flies low overhead on its way to Westover Air Force Base. As Weissman tries to explain the double-breasting business model by which Shop Rite, which is unionized, and Price Rite, which is not unionized, are owned by the same corporation, one plane flies overhead and entirely blocks out his words for several long seconds. We stand there smirking at each other. “Yeah,” he says looking up once it’s far enough away to allow for conversation again, “that can make it hard.”•
— Amanda Drane, adrane@valleyadvocate.com