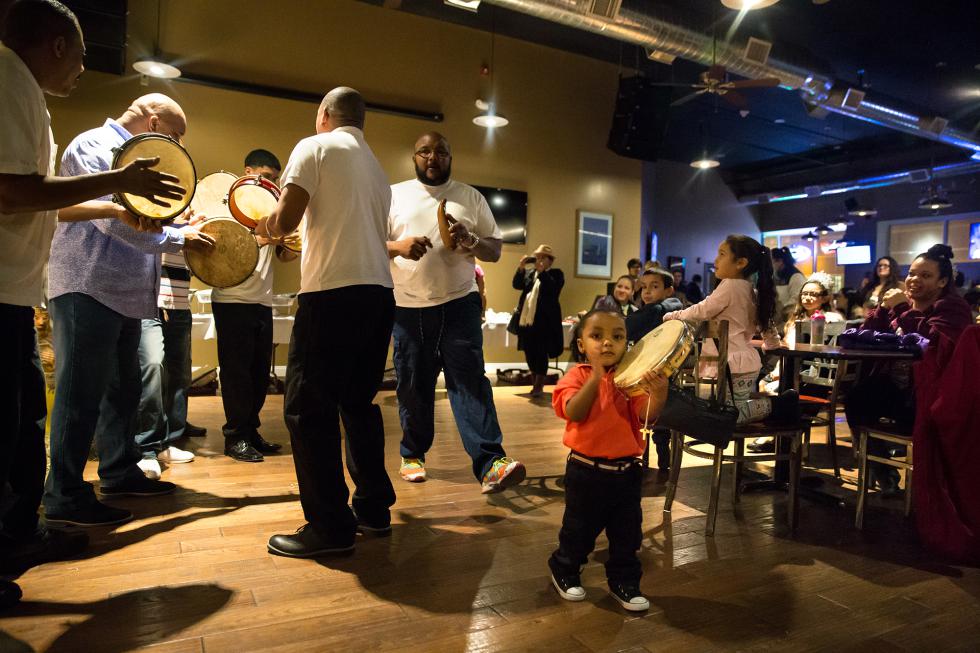 DAN LITTLE Women of the Vanguard members joined with the North End Community Alliance host a Three Kings Day celebration Wednesday at the International Biergarten on Main St. in Springfield.

The camels may not be here at this year’s Three King’s Day celebration put on by Springfield’s Women of the Vanguard and various community partners, but the party’s so much fun that no one seems to mind.
Arriving around 5:30 at Main Street’s Biergarten International — a half-hour after the party’s official start — I find the large open room has about 35 people in it, sitting and talking and enjoying the overhead music as they wait to dig into the pans full of food along the wall that parallels Springfield’s Main Street. “There’s a lot more people coming,” Ana Andino, vice chair of the Women of the Vanguard, tells me. “We’re on Puerto Rican time.”
Baby Jesus and the nativity sit beneath a mural of a village on the Biergarten’s northern wall. Alongside, three empty chairs sit in wait.
Sure enough, at around 6 p.m., the room fills and the party starts in earnest. Beats blast from unseen speakers and conversation rises to the occasion. Even festive songs, like “Mi Burrito Sabanero” — a song about a donkey and his master’s journey to Bethlehem to meet baby Jesus — boast a danceable beat. Guests form a long line at the food table. Volunteers smile and shuffle to the beat as they serve heaping plates of rice, pulled pork, chicken, and potato and pasta salads. The dozen hotel pans of food, Andino tells me, came in part from the New North Citizens Council’s drop-in center, but was largely home cooked by people in the community.
The three reigning Miss Bella Hispanas — one from each age group — head the line, wearing tall, sparkly tiaras and sashes. One mom dances back to the table to eat with her plate in one hand and her toddler in the other, her feet moving back and forth and hips swaying side to side.
During dinner, I meet former city councilor Zaida Luna — the city’s first ever Latina councilor, she tells me. Naturally, our conversation quickly turns political. City officials don’t communicate well or work to inform the Springfield community, she tells me. “In Puerto Rico, everything closes for a week to hold elections,” she says when I ask her about November’s low voter turnout.
Throughout the summer and fall, Luna spent would-be campaigning time spearheading the North End’s fight against the proposed relocation of the Western Massachusetts Correctional Alcohol Center to the neighborhood.
“I don’t need a title to represent my community,” says Luna looking around the room. “I’ve lived in the North End for 33 years.”
After guests finish their dinners, Los Pleneros de Carolina serenade the room “con la plena.” The band’s seven musicians beat hand drums and sing Puerto Rican carols.
“This is very typical,” says Andino. “In Puerto Rico they go from house to house starting the day after Thanksgiving.”
Guests move their feet to the beat and the room alights with cell phone screens capturing the moment. During one musical transition, a musician passes off his drum to a tiny helper — Khristhopher Pabon, 2, of Springfield — who doesn’t hesitate to start tapping away.
Los Pleneros wrap the music and it’s time for the evening’s main event. A hush grips the room as the three kings enter one by one from a side entrance — the first in a shimmering purple robe, the second in green, the last in blue.
The children present are called to greet the kings by name. There’s no lap-sitting here — the kings gently hand off gifts to each child who approaches. The little drummer walks away from the kings with a slight smile and a gift just as big as he is.•
— Amanda Drane, adrane@valleyadvocate.com