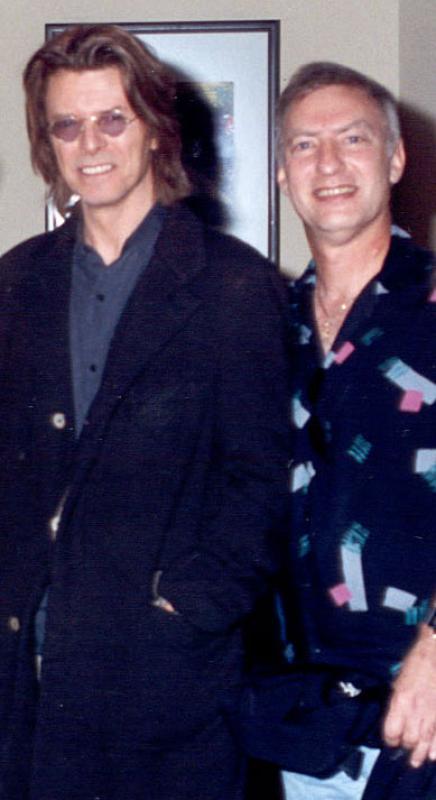 As evidenced by the recent, massive outpouring by fans and contemporaries alike, David Robert Jones — better known as David Bowie — touched generations the world over. In fact, some would go so far to say that the Starman may have even possessed intergalactic abilities and a seemingly otherworldly appeal.

Closer to home, however, the Crawler recalled at least two Bay State notables whom he remembered were once under the direct employ of the Thin White Duke. In the wake of Bowie’s passing, the Crawler reached out to them both in an effort to tap into their unique access and overall experience with bonafide rock royalty. Though working in different capacities in different eras of his career, The Iron Horse Entertainment Group’s current marketing director Jim Neill and former Rock 102/Lazer 99.3 program director Neal Mirsky both spoke of a man who was somehow equal parts class, compassion and glam/rock/fashion superstar sex symbol.

“I had the privilege of running some meet and greets on David’s 1990 Sound & Vision Tour,” says Neill. “He was 43, I was 27. He was utterly charming and friendly. Each night before the show we’d gather the VIP’s in a tent and wait for his manager, Coco Schwab, to usher him in and hand him over to me. I would walk him through the guests, introducing him to each one, one at a time. Then he’d whoosh away with a smile and an ‘enjoy the show.’ It was surreal, but somehow he made it feel as natural as possible, acting like he was a humble everyman yet somehow conveying that, of course, he would never be that and that we were all in on the joke and making the best of the eternally awkward process of meeting truly famous people. By the end of the tour in Los Angeles, we had a rhythm, he knew my name we devised a two minute warning system — a stealth wink — so he could let me know when we had to wrap it up. These meet-and-greets each lasted 10 minutes, and each felt like two.”

“I happened into the job of video director on the North American stadium shows of his ‘Serious Moonlight’ tour in 1983,” recalls Mirsky, now retired in Florida. “I basically directed a four-camera live shoot of the show for the huge video screens. Every performance was incredible and David treated the crew very well. I’m talking steak and lobster for the pre-show dinner back in catering good! And David frequently ate with the crew.”

While Mirsky adds that watching Spiders From Mars guitarist Mick Ronson surprise everyone in Toronto by popping onstage to perform “Gene Genie” for the first time in a decade was undoubtedly a highlight of the experience, he admits that his favorite Bowie moment actually came years later.

“I was having brunch with David in New York and I mentioned to him that I had lifted one of my favorite quotes of all time from an interview he did with Rolling Stone,” he says. “He asked what the quote was, and I told him ‘I’ve seen so much cool, it leaves me cold.’ David smiled and replied ‘Neal, I don’t remember saying it, but I’m glad I did.’”

According to one national contest, they were the best unsigned band in America. Thanks in large part to a two-page spread in the international magazine Inrock, they’re also, actually, very big in Japan. But after a year on the proverbial rock n’ roll launchpad waiting for their North American tour with Creed’s Scott Stapp to get off the ground — Stapp had some highly publicized personal issues to contend with — it’s all systems go for Rockett Queen.

Check in next week for the Crawler’s exclusive interview with Rockett Queen’s lead singer Walter Lee.

In the meantime, check them out live in support of Creed’s Scott Stapp this Saturday, Jan. 23 at Hartford’s Webster Theater or The Palladium in Worcester Sunday, Jan. 24.•