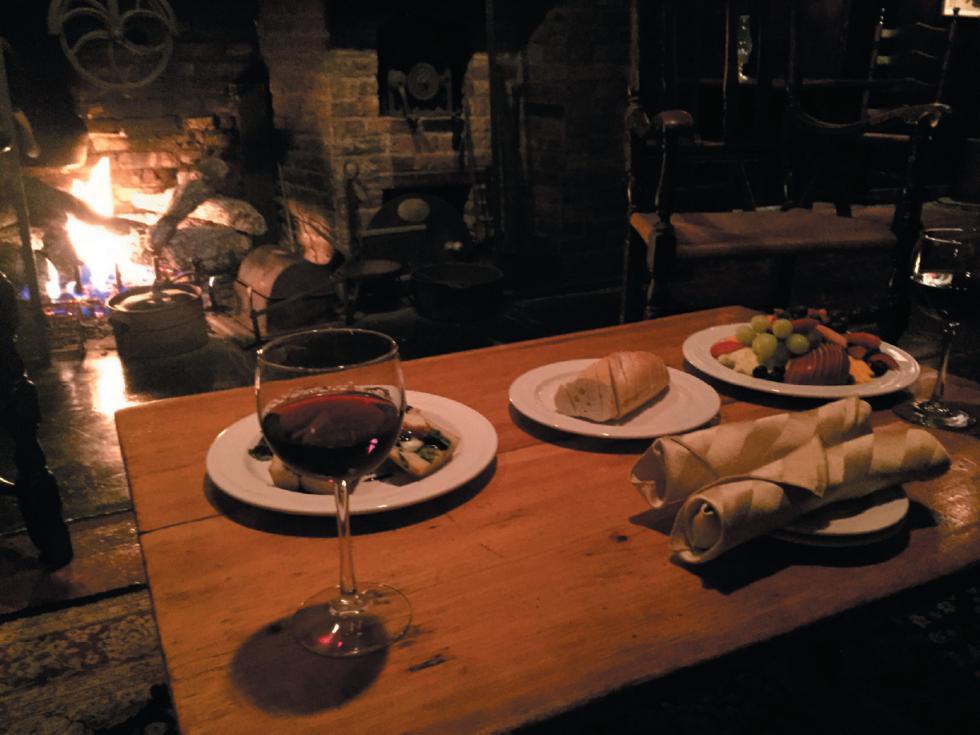 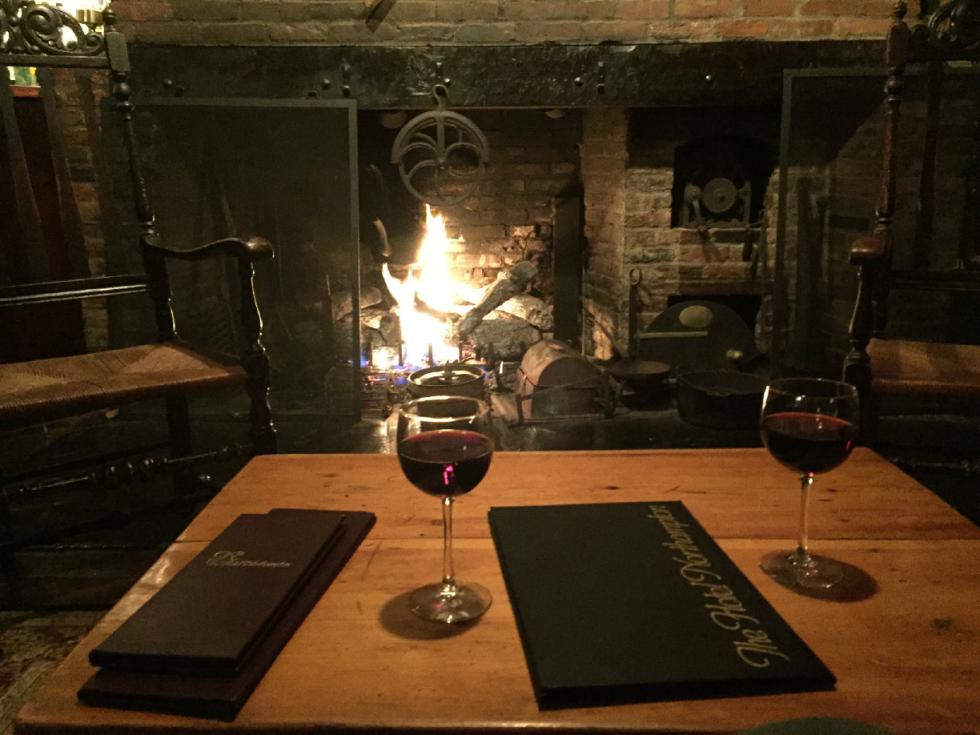 There’s something unnatural about strolling downtown in the dead of winter wearing a spring jacket and feeling a warm breeze on your face. Still, snuggling by the fire is a thing enjoyed in spring. So, whatever the weather feels like when these words reach you, dear reader, there’s some cuddling to be done fireside.

On this balmy winter evening, my sweetie and I decide to check out what is likely one of the oldest fireplaces in Northampton — the one at Hotel Northampton’s Wiggins Tavern.

Walking into the mainstay’s front doors hand-in-hand, we’re overtaken with elegance. High ceilings and fanciful art lead the way as we head around the corner to the basement tavern, which has a totally different vibe.

It feels kind of like walking into your own living room. At around 9 p.m., two women are just leaving and two more sit at the bar while we take a seat on the couch facing the fire. At this distance — about six feet from the flames — the fire’s warmth is pleasantly present but not overpowering. We clink glasses of cabernet and await our snacks.

The tavern was originally built in 1786 in Hopkinton, New Hampshire by Benjamin Wiggins, and moved to its current location on King Street piece-by-piece in 1927 by Lewis Wiggins. A butter churner sits in the northwest corner. The ceiling’s wooden beams hang low and the curtained windows facing Main Street. A wooden piano sits in wait by the fire, with a raised wooden sign above it reading “Justin Morgan Museum.” The sign which also depicts a Morgan horse, stands as a nod to the 18th century West Springfield native dubbed “founding sire” to the famous breed. Gold-handled lanterns line the walls.

Our cheese platter and bruschetta arrive and so we sit hip-to-hip snacking and sipping. Between the lanterns and the fire, I’m taken with the low-light romance of it all, until an out-of-towner tries to order a drink just as the bartender calls last call. Time to head out, we agree.

Here are some other cozy places:

The place has a Wild West theme and a host of beers on tap. If you’re a little country, this may be the place for you. Also, order the flaming cheese and thank us later.

Pairs well with: Schnitzle and spaetzle

Established in the 1930s, Hofbrauhaus is designed like an old German restaurant with Bavarian decorations lining the walls and servers in lederhosen. The bar is part of an impressive, carved dark wood tavern with a cozy fireplace.

Pairs well with: A bottle of wine

The Blue Heron occupies Sunderland’s old Town Hall across multiple floors, but that doesn’t make the lounge space any less intimate. Couples looking for a quiet spot should consider reserving one of the several white linen tables surrounding the lounge’s fireplace. The Blue Heron also offers soft seating at the lounge’s full-service bar, a great place to relax with small plates and cocktails.

Champney’s makes up a large part of the ground floor of the Deerfield Inn, but even if you never make a reservation to stay upstairs, you’re welcome to cozy up at the tavern’s long mahogany bar or at a banquette for drinks and an appetizer (we recommend the maple-pork poutine and the fried oysters), then wander over to an armchair or loveseat by the fire and feel the world slow down, just a little, to a simpler speed.

Pairs well with: A pint of craft beer

Don’t let the roadside name fool you — the Wagon Wheel has inside seating, and the cushioned booths in the homey dining area are easy to settle into, especially when there’s a fire going. Head cook Carolann Zaccara mainly whips up diner dishes, but a few higher-end entrees make their way onto the specials menu, ranging from seared tuna one day to pho, curry, or Chinese food the next. The Wagon Wheel isn’t a late-night place — the fun wraps up around 8 p.m. — but considering that it’s a 10-minute drive from the center of Greenfield and a stone’s throw from Turners Falls, it’s not exactly out of the way for hilltowners in search of a quiet space to enjoy a local brew and some comfort food.

Pairs well with: A cup of soup, blackened scallops, a Pilgrim buckle on your hat

The old time New England restaurant has three fireplaces to dine by. The restaurant was built by combining two antique buildings: the Atkinson Tavern (circa 1789), which was once in Prescott; and the Baptist meeting house (circa 1822), which came from Southwick. The tavern serves traditional Yankee fare and plenty of fish dishes.•