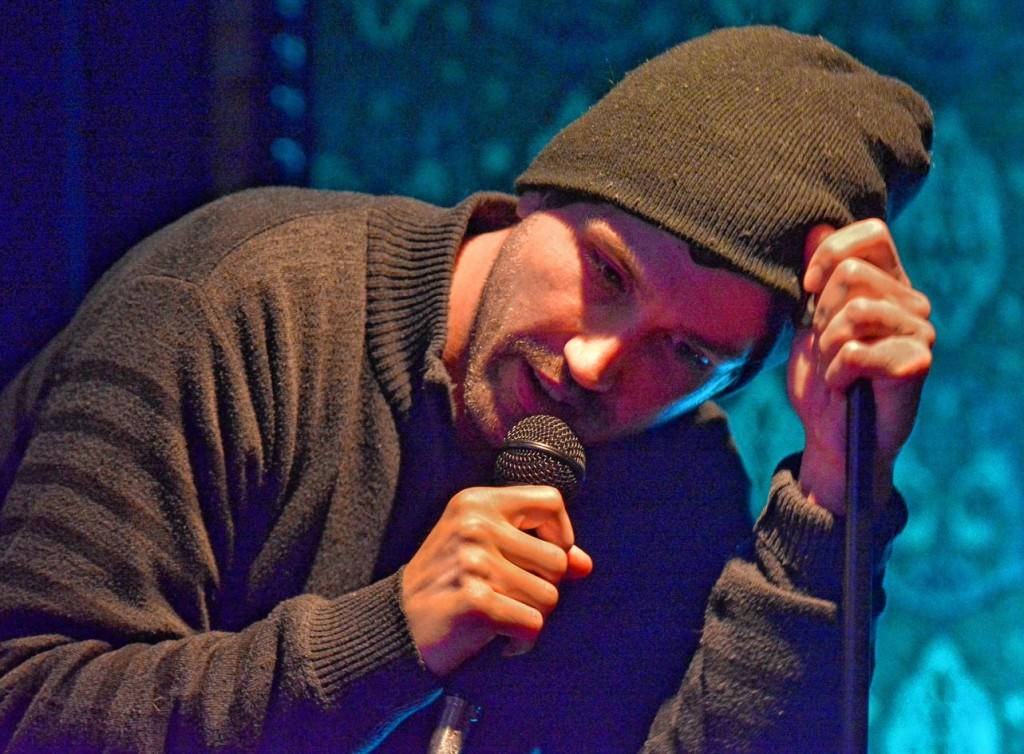 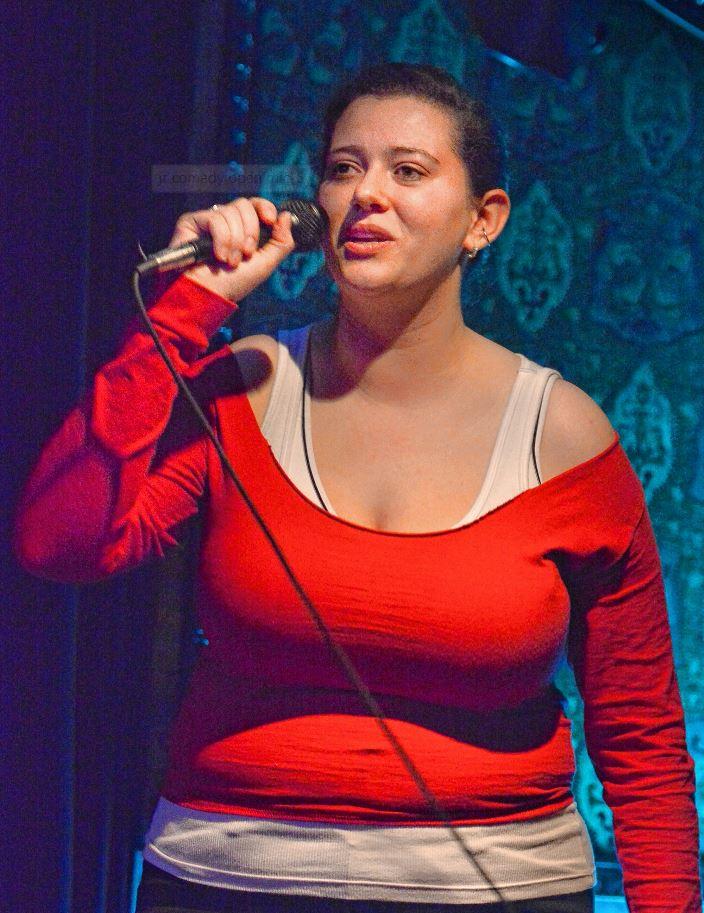 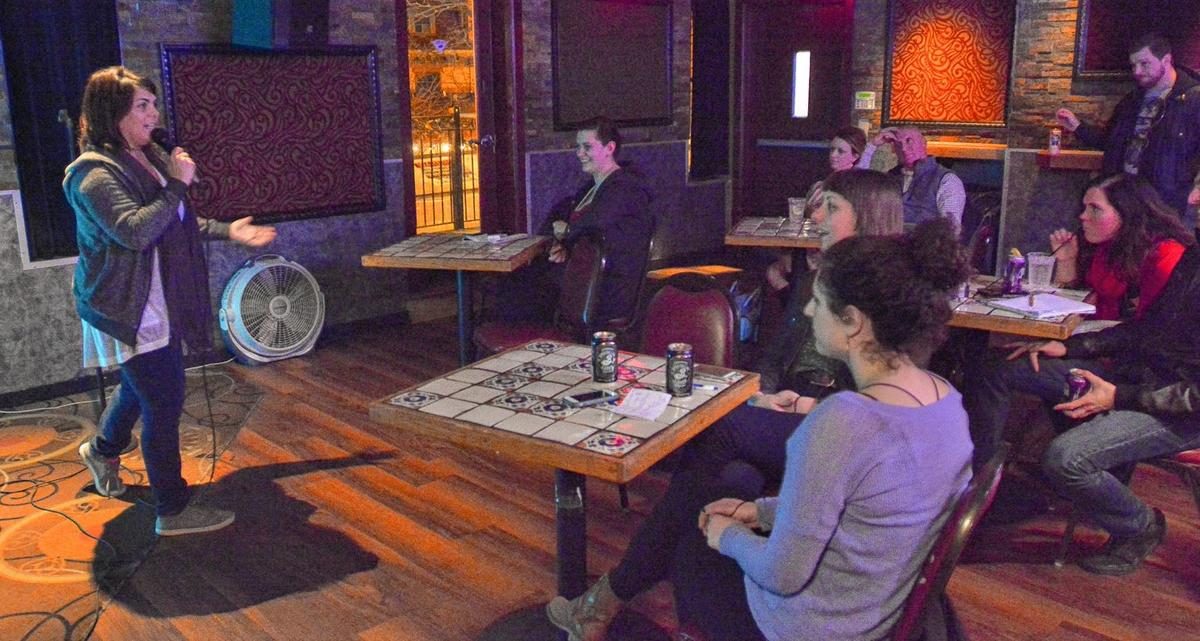 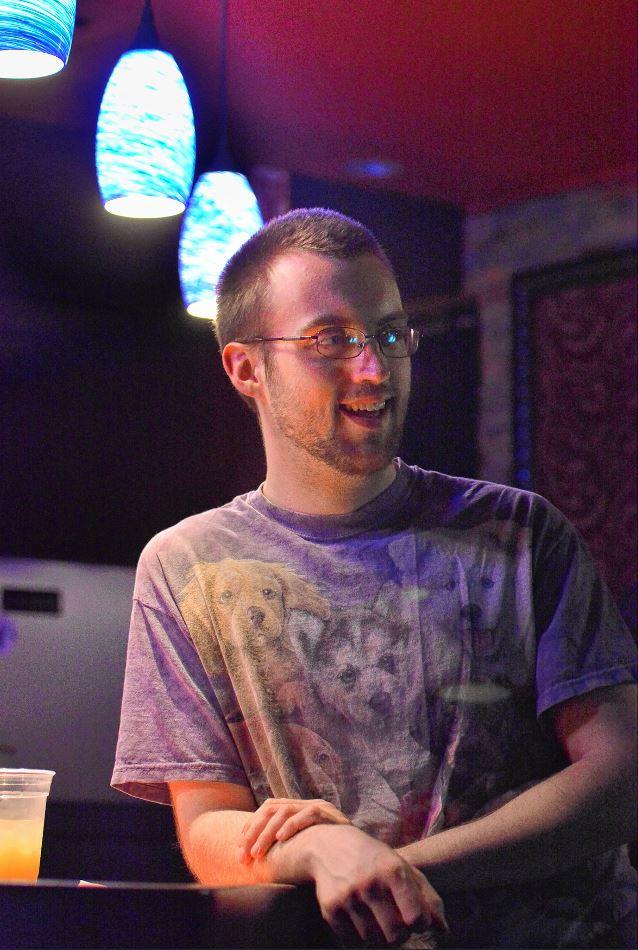 It’s 7:30 on a Wednesday night at Bishop’s Lounge in Northampton. The crowd is small, but people are filing in one at a time. At the bar, heads turn each time the door opens, looking for a familiar face. The venue is cozy and intimate, and everyone seems to know each other, sharing laughs and sipping beer from plastic cups. The dim lights are brightest at the bar, but in one corner of the room, an unattended microphone stands.

Nick Caron sits at the bar. He’s a young guy, quiet and thoughtful, who wears a purple t-shirt with puppies on it. He has written out a sign-up sheet on a scrap of paper with about 30 slots available for tonight’s performers. As people arrive, some make their way over to Caron, engage in friendly small talk, and sign their names. There’s a slightly nervous air about each of them, but they seem energized and positive. After a few minutes, the list starts to fill up, but the first six slots remain conspicuously blank. It seems no one ever wants to go first at these things.

When someone hits pause on the funk-jazz playlist, and Caron steps up to the microphone to tell some jokes, it’s easy to see why. There’s a rhythm to stand-up comedy, and the audience isn’t quite at ease yet. As the host, it’s Caron’s job to get the crowd warmed up before introducing the other comics. Each comic will get just a few minutes, but the limit is not strictly enforced.

Caron’s task is one that would make even the most self-assured extrovert break into a cold sweat. But he’s relaxed and straight-faced, and his delivery is deadpan. The humor gets dark almost immediately, with jokes about the Brussels attacks and the death of Toronto mayor Rob Ford, but then he takes a step back with observational humor about sandwiches. That transition itself is enough to get a laugh.

By now, Caron’s a veteran of the Northampton comedy scene. He’s been running the Wednesday night open mics since 2011, except for a period in 2014, when he admits he was just too burned out on comedy. But he couldn’t stay away for long. The local comedy scene has meant a lot to him over the years, and he worried that it would languish or fall into the hands of hosts that don’t care about it the way he does. Bishop’s is the only place around, he says, that’s consistently hosting comedy open mic nights: twice a week, on Wednesdays and Sundays.

Still, it can be exhausting, he says, being responsible for an event that’s at the heart of a scene, especially one that draws such disparate people with strong personalities.

“The open mics started to feel less of a thing I was doing as a passion or a hobby and more of a job,” Caron says. “Something that was stressing me out a little bit. There’s a lot of weird personal politics in the comedy community.”

It’s a little counterintuitive that conflict abounds in a medium that’s aimed at making people laugh, but comedy is raw by nature and the people that do it tend to be passionate about it. To many of them, stand-up is an art form that pushes the boundaries of what an audience will laugh at. The open mic nights are essentially a test bed for comics to try out new material and find those boundaries. Sometimes, lines get crossed.

“You can get up on stage and talk about whatever you want,” Caron says. “It’s an open mic, it’s a free forum, and you can go up there and say literally whatever. But you can’t get upset when people don’t like it. Not all art is sacred if it hurts people.”

I ask Caron if it takes bravery to get up in front of a room full of people and try to make them laugh. Not really, he says. He’s not ready to say someone is brave just for getting behind the mic. A lot of people only do it once. He’s got more respect for the people that return.

Anya is one of those that keep coming back. Until recently, she was pursuing a Ph.D. in physics, but dropped out of the program to pursue her comedy career full-time under a stage name. A bold move, to be sure. I ask her what prompted the change, and she offers a hint: “If it wasn’t art, I wouldn’t do it.”

“It’s not that I don’t like physics anymore,” Anya says. “I’ve been doing physics my whole life, so I just wanted to see what something else would be like, and the only other thing that I really care about is comedy.”

She’s good at it, too. If she is the least bit nervous during her set, she doesn’t let it show. Her wit is sharp, and she wastes no time taking aim at the small press corp in attendance, cracking self-deprecating jokes about her love life, and joking about the spring break plans of her students, effortlessly engaging the crowd as she works.

Anya was born in Moscow and moved to America as a child. “I feel like I can’t talk to people if I’m not on stage,” she tells me. “I like to talk about personal family problems, dating problems, how my heart is broken and my life is falling apart. That stuff I can talk about with Americans — about being an outsider. I’ve found it works really well on stage, but it doesn’t really work well in real life.”

Stand-up comedy has the capacity to be self-deprecating, she explains. “It’s as therapeutic as literally anything else that people are pouring their hearts into, but it’s played up because it’s funny when the comedian is miserable or the comedian is an alcoholic.” But you have to find that balance, she adds, “of relating to the audience and making yourself coherent and safe to them, but then opening their eyes to something they haven’t seen before.”•