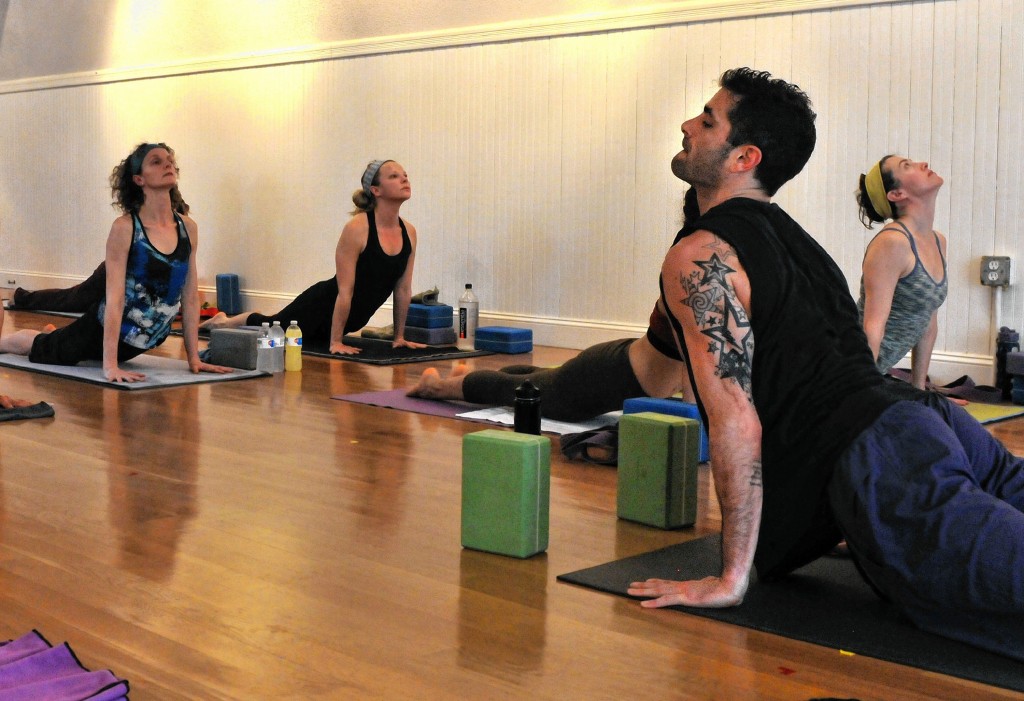 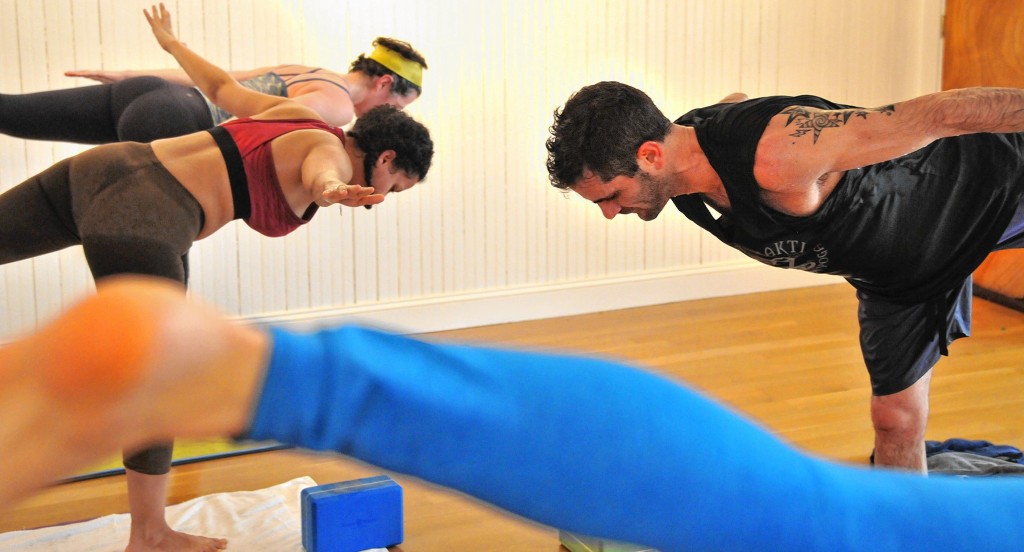 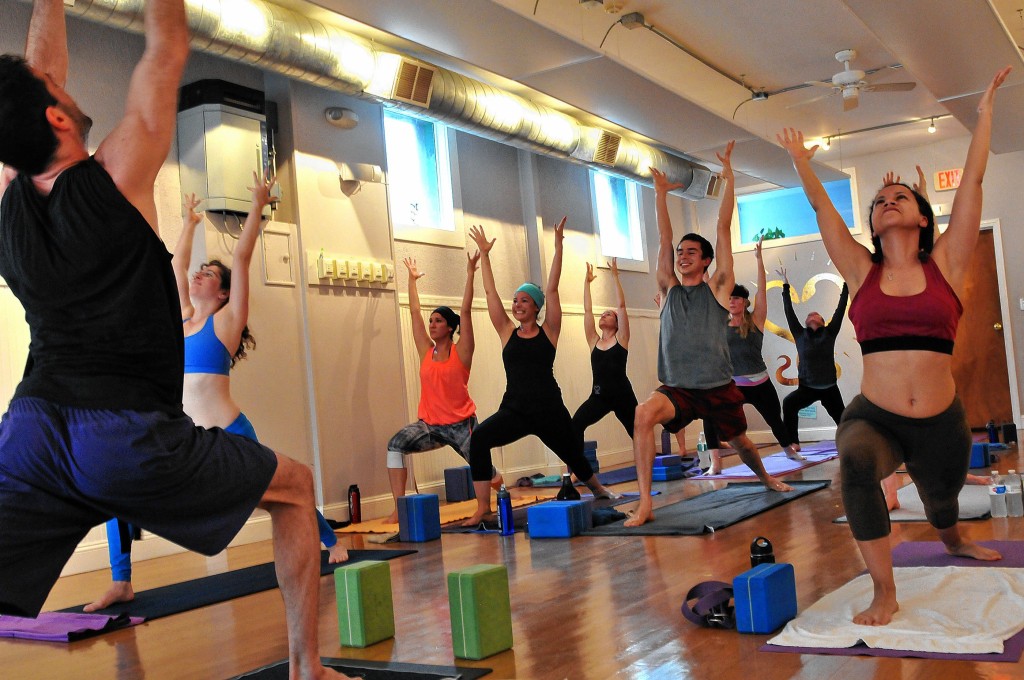 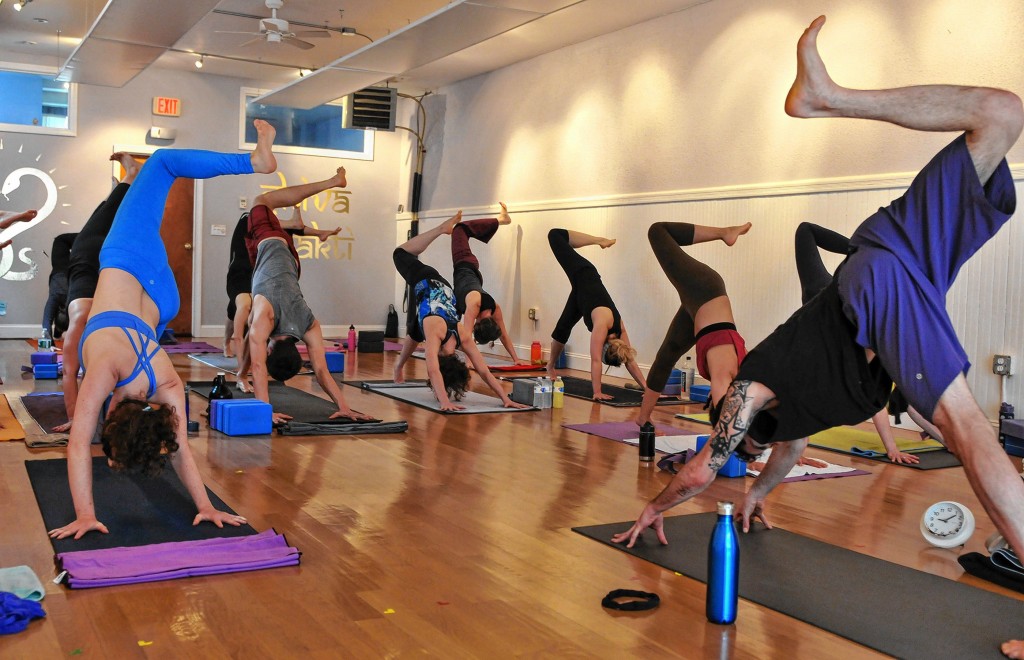 ” he tells his typically full-booked classes. 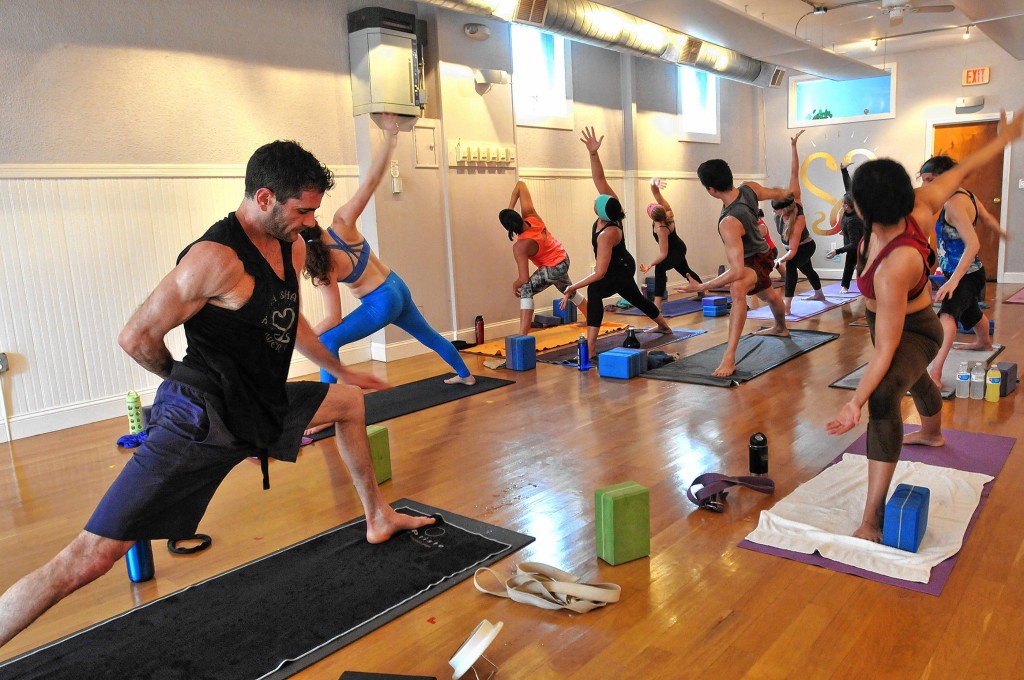 The power vinyasa class hasn’t even begun and most around me — 50 bodies with mats no more than an inch apart — are drenched with sweat.

As we struggle through the humidity-induced delirium in the 93-degree room at Northampton’s Shiva Shakti, tonight’s teacher promises he “wants to kick your butt a little.”

The intensity of the room is enough to clear your sinuses, but that’s not all teacher and studio co-owner Brandon Compagnone is after. If he didn’t have the yoga thing going for him, he could have a career in motivational speaking — this guy wants to get you out from wherever you’re “stuck.”

“We don’t do it like they do it in California,” he calls to one student exiting halfway through the class, succumbing to the extreme yoga experience.

Compagnone, 41, speaks with the intensity of someone who regularly has to explain to people that he’s not angry, that that’s just how he talks. As we sit in The Roost in Northampton later in the week, there’s such a fury in his gesturing that his hands continuously run into me. Even just talking about yoga gets Compagnone all riled up.

“I’ve always been an intense person,” he says, adding that for him blurting is purging. “The world’s a fucking intense place and it will devour you.”

When Brandon Compagnone opened Shiva Shakti in January 2008, he says power yoga was relatively unheard of. The style of yoga had a certain appeal for him, as he was taking a break after years spent as a competitive athlete.

Compagnone grew up learning karate from his dad, who was an instructor, and so got an early taste for athleticism. At 13 he got involved in wrestling, which captivated him for years until too many injuries compelled him to quit. For a few years following that, he got into competitive running, but the sport was too damaging for Compagnone, who likes to push himself to the max.

“I needed to find something challenging for my body that wasn’t going to hurt me,” he says.

So, he tried a power yoga class in Boston and got hooked.

Though yoga has been transformational for Compagnone, he says the practice doesn’t give — it awakens something deeply engrained within the body.

“It’s about just waking up and realizing your own human potential,” he says. “You just gotta sweat a little bit.”

And sweat is a thing you do in this class. Withstanding a high-powered hour or more in this hot and humid studio is like an otherwordly, hallucinogenic experience. Rest assured that even if you’re not a person who typically sweats, it will be dripping into your eyeballs and you won’t be leaving with a dry square inch.

Classes at Shiva Shakti are hard, says Compagnone, because people today don’t have to do enough that’s physically demanding.

“We live in an era when we don’t have to do a lot,” he says. “Our bodies basically become untapped energy centers.” He says he pushes his students because it works. That fear, that burning intensity, he says, is “your body coming back to life.”

“You don’t need to like it,” he reminds his students during class.

Compagnone relishes the yogic balance between hard and soft, the ability to hold firm in the storm of life while at the same time maintaining a softness that keeps you open to possibility.

When he’s not teaching, you’ll find Compagnone next to you in class. “Being in my studio as a student is probably the most important thing I can do as a teacher,” he says, adding that the words “I know” are two of the most dangerous words in the English language and that true progression in yoga requires an unlearning. “I believe you can’t give what you don’t have.”

Compagnone spreads the power yoga methodology in teacher training and assistance programs around the country. He says he’s thinking about opening another studio in Boston.

When he opened the Strong Avenue studio, he says people in town were incredulous of the spaces outlined in tape for 50 mats and the eight changing rooms downstairs. He says people told him Northampton is too small for that level of attendance. And now, he says, there are lines out of the door.

“Something is possible that wasn’t possible before you opened yourself up to it,” he says. “But you can’t be aware of any of it until you’re aware of your hands and your feet.”