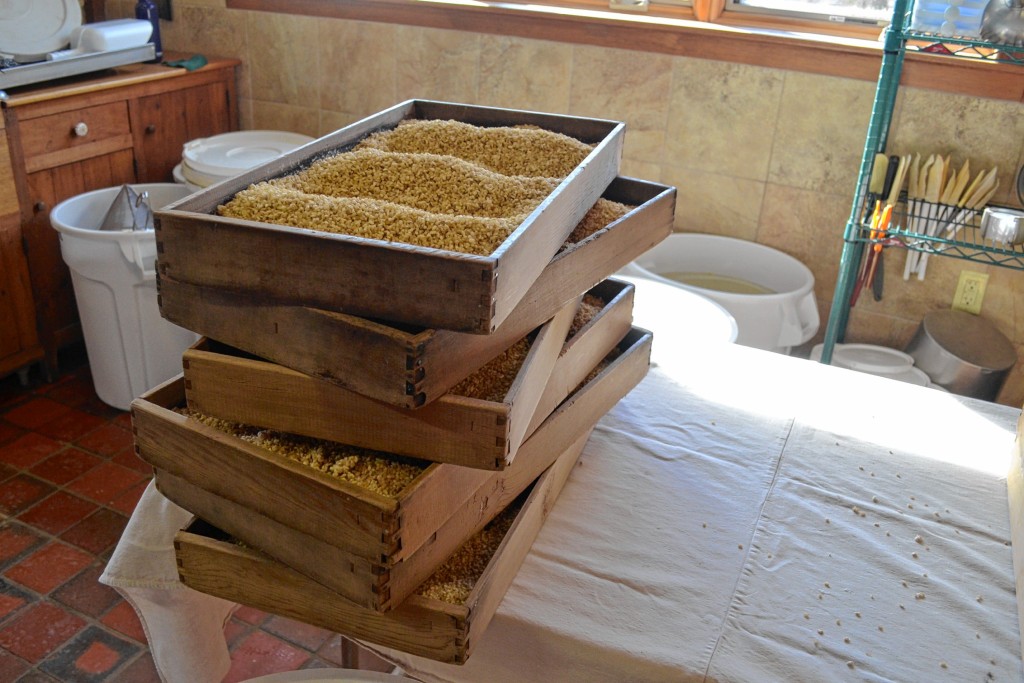 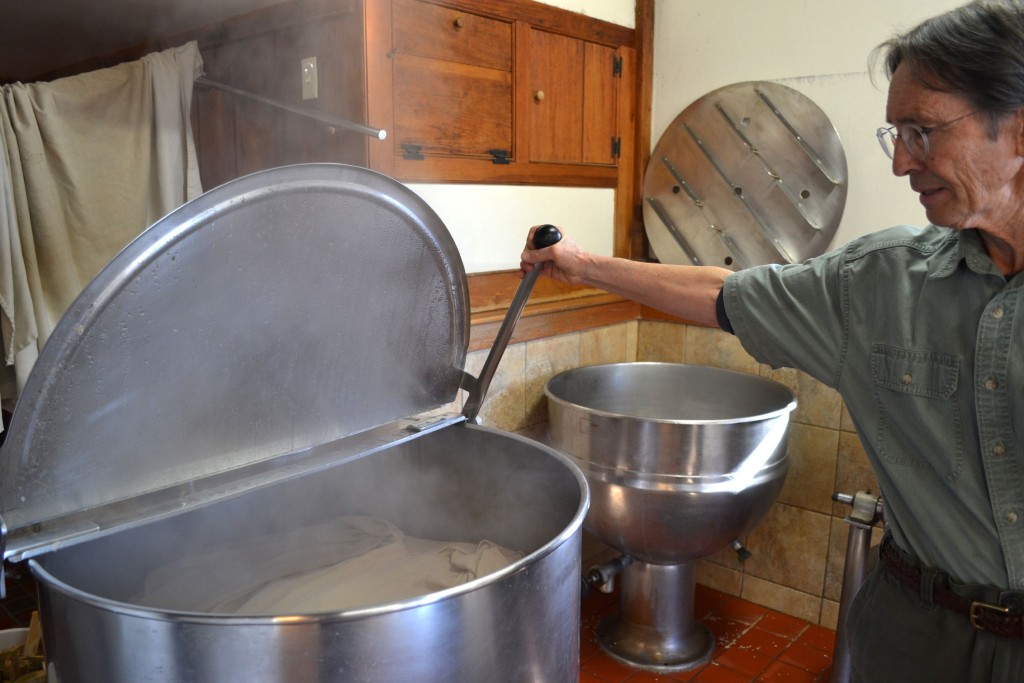 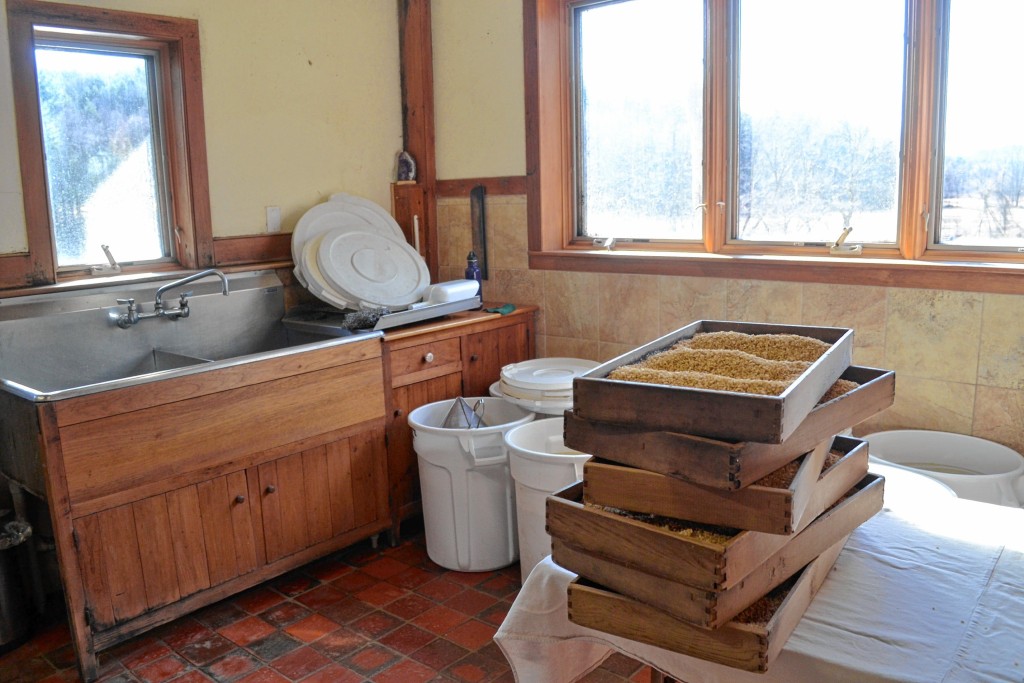 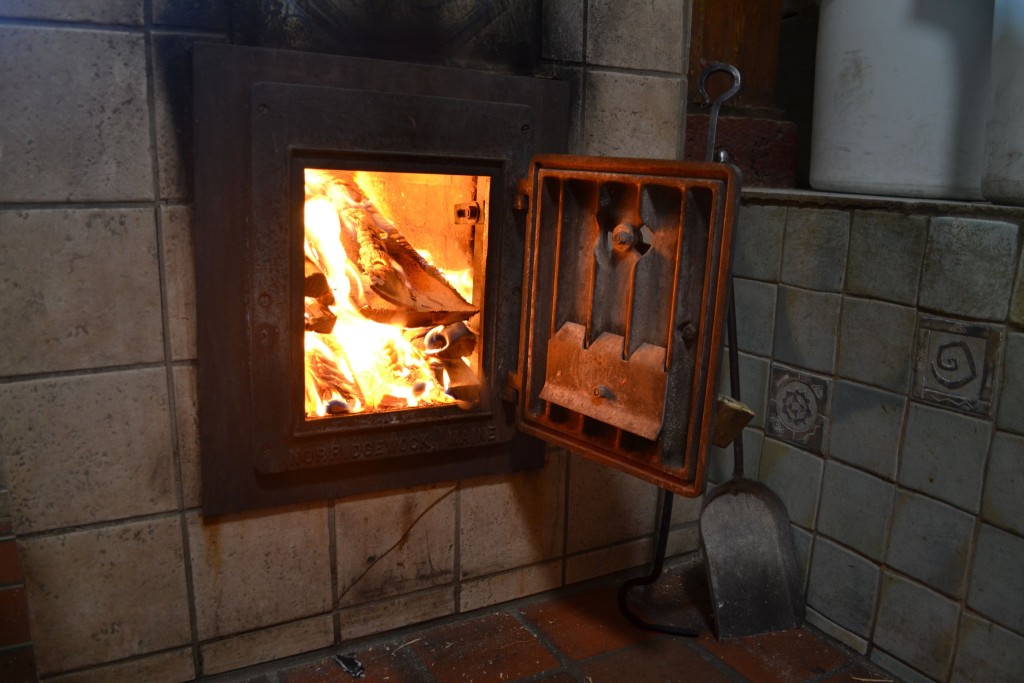 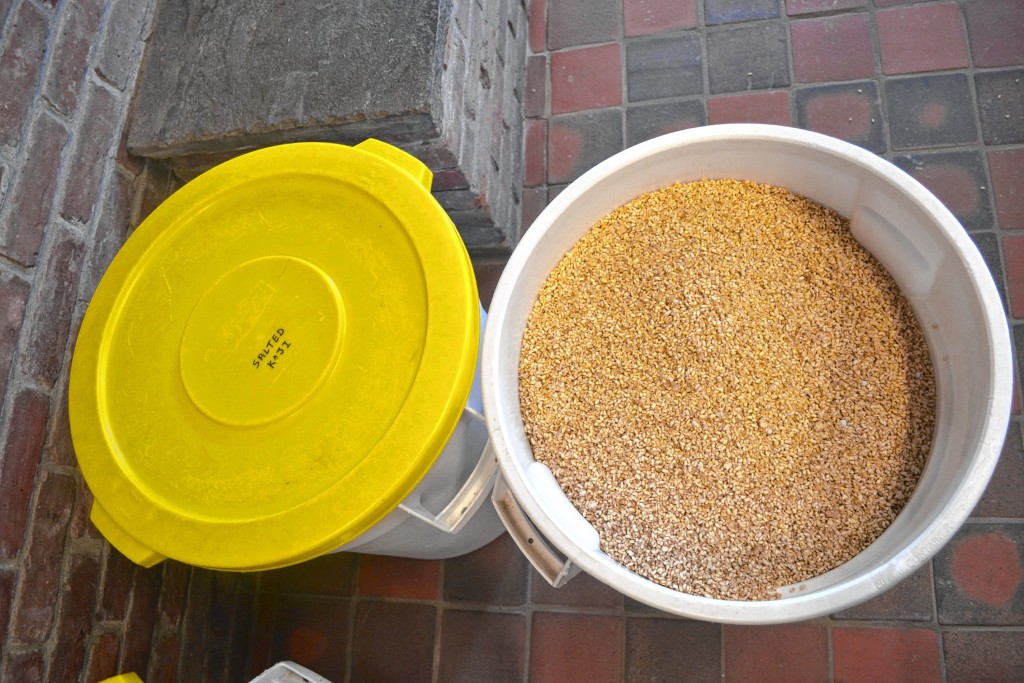 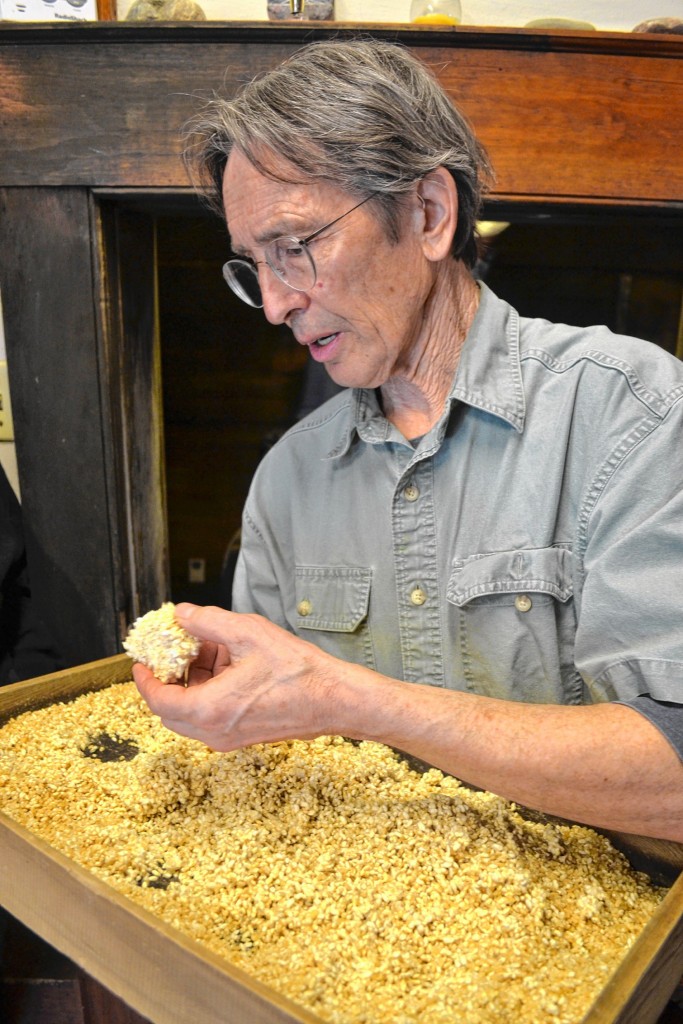 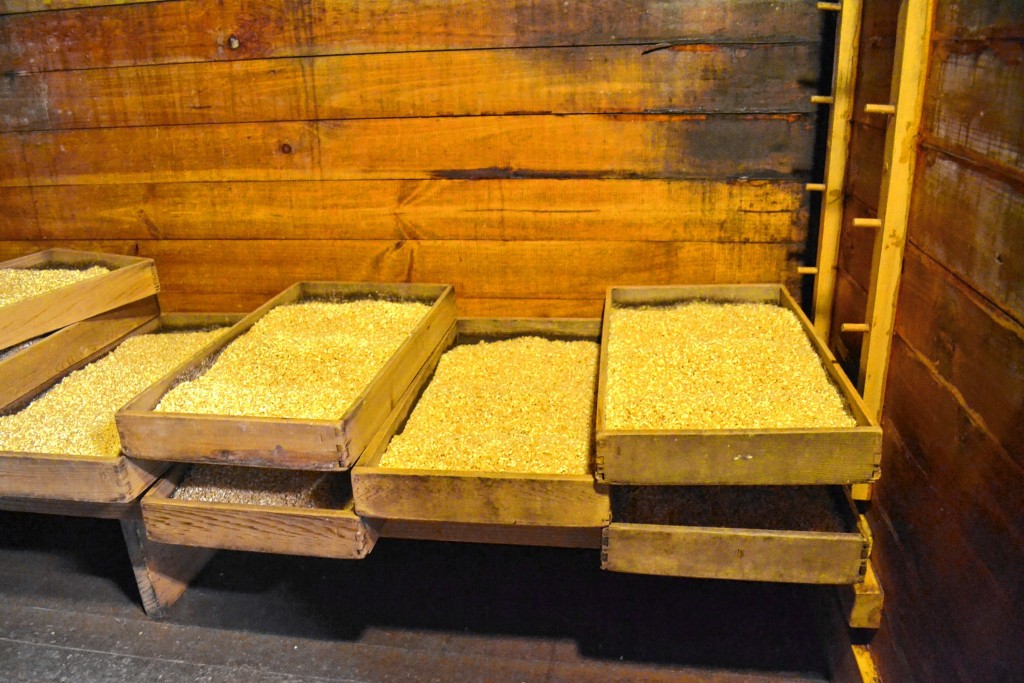 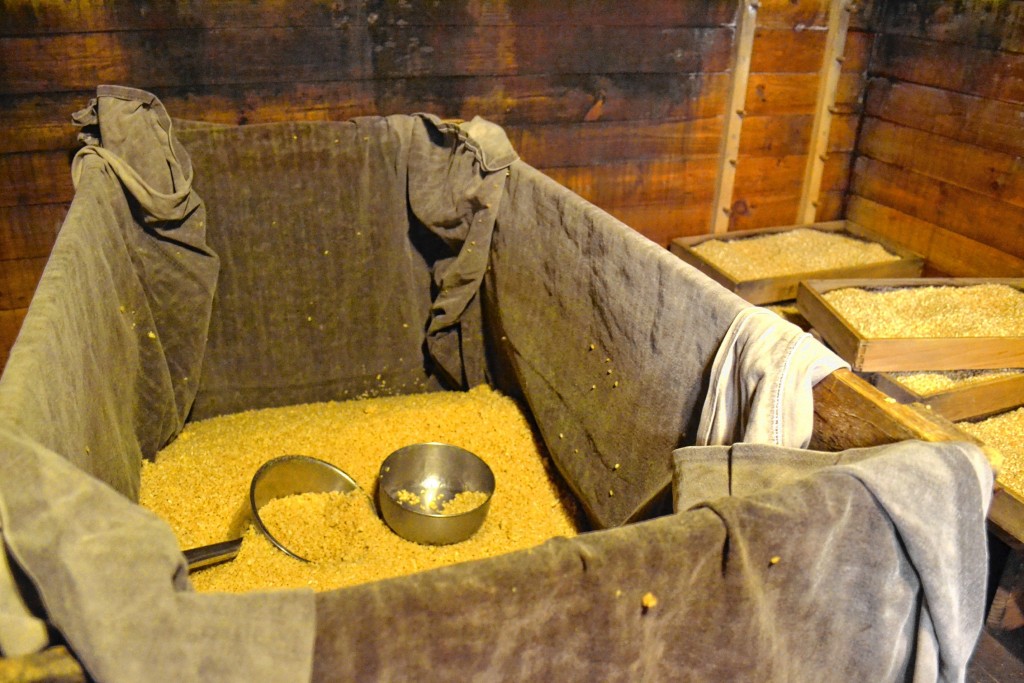 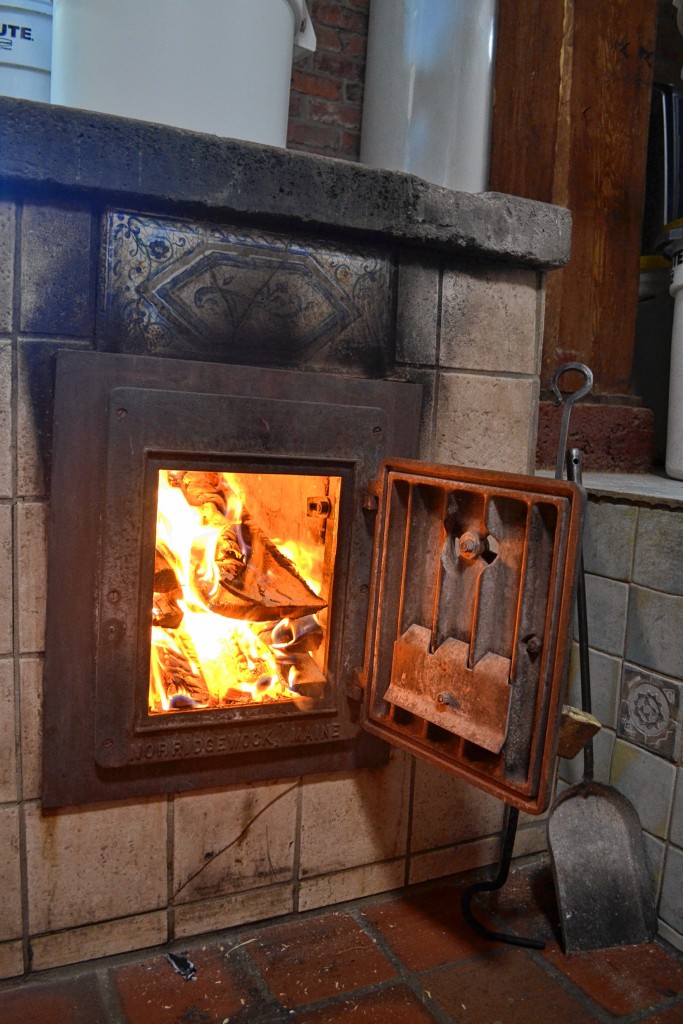 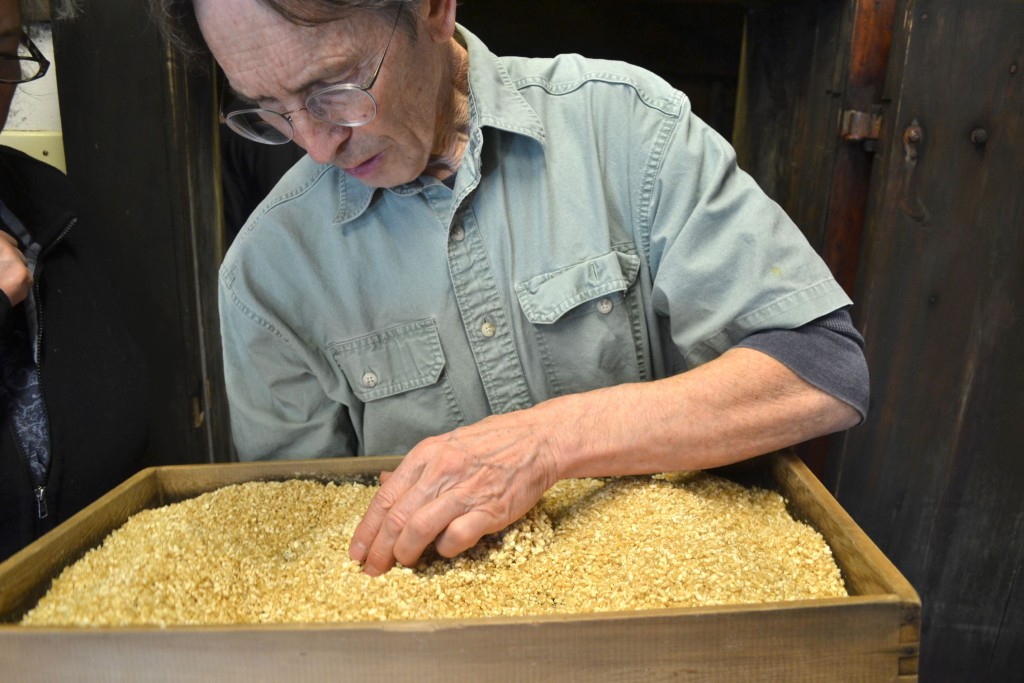 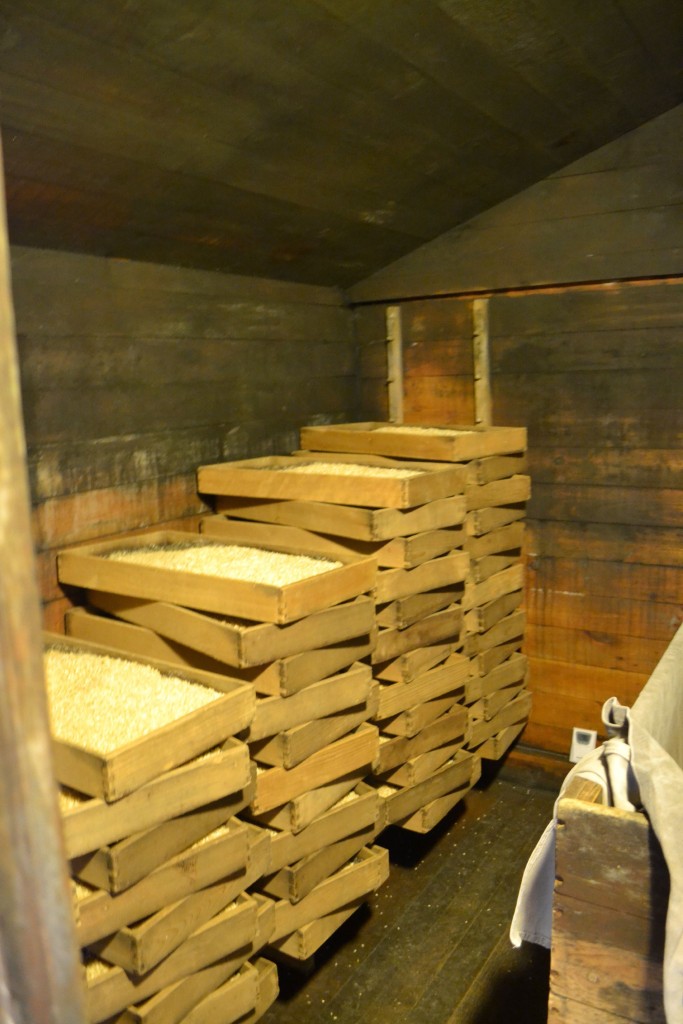 Christian Elwell swings open a small, heavy door, and I glance in at the crib.

The temperature inside this humid little room is about 90 degrees, and the wooden trays stacked in towers along the wall give off the smell of warm, steamed brown rice. In the center of the room sits the crib: a large wooden box lined with muslin cloth and filled with steamed rice that has been inoculated with mold spores.

If I were Aspergillus oryzae, the strain of mold beginning to grow on this rice, I’d feel right at home in here.

This is the “koji room,” and what transpires here is just one step in the process of combining and fermenting beans and grain to make miso. Christian, his wife Gaella, and their 12 employees at South River Miso Company in Conway have been here since 1979, working in timber-framed buildings built to honor the ancient Japanese farmhouse tradition of miso making. The company produces roughly 120,000 pounds of miso per year — no small feat for a team that crafts its product mostly by hand, using wood-fired cooking techniques, in 500-pound batches.

To many American eaters, miso is not well known. Perhaps it is most recognizable as the star of that hot, cloudy bowl of miso soup you get from time to time at an Asian restaurant. But as a flavorful Japanese seasoning — which is produced as a paste of varying colors and consistencies — miso is a delicious and versatile ingredient that has long taken a central role in Japanese culture and cuisine.

For over 1,000 years, crafting traditional miso in Japan has been treated as a highly-skilled art. It requires a delicate touch from practitioners that understand miso’s big secret: it’s alive.

Miso is a beautiful balance of natural carbohydrates, amino acids, essential oils, vitamins and minerals, and lots of high-quality protein. But most crucially, unpasteurized miso is a living probiotic food, like yogurt or kombucha, and the natural digestive enzymes and microorganisms it provides — such as Lactobacillus — help us to maintain healthy digestive and immune systems.

Miso is made from a combination of cultured grain, cooked beans, and salt (South River Miso uses solar-dried sea salt). The company’s current offerings include varieties made from rice, barley and millet, which are combined with  soybeans, chickpeas, or azuki beans. The company also treats the seasoning as a great platform for added flavors, which has led to specialty lines of Dandelion Leek and Garlic Red Pepper miso.

South River Miso products are available in most natural foods and co-op markets across the Valley, and in natural food outlets throughout the Northeast as well as in other regions of the country. The company also distributes its miso — as well as homemade miso tamari (a by-product of miso making) and other products — through direct retail sales on its website, which ship across the country during the winter and cool months of the year.

“The per capita consumption of miso in Japan is 18 pounds per year, which amounts to about three teaspoons a day,” Christian tells me. “If that were the case here, our shop could barely supply the miso needs of 7,000 people. The population of Northampton alone is over 25,000 people. So our wide distribution is partly due to the fact that miso is so little known and used in modern-day American cuisine.”

Individual orders keep coming in, he says, because of the reputation and quality of this miso, “it being the only miso commercially available that is still produced entirely by traditional methods of miso making found in Japan before World War II and the advent of modern food processing.”

As humble and homey as the South River Miso site appears, the traditional methods employed by this staff provide a fascinating view of the complex chemistry and microbiology that can transform raw natural ingredients into finished, living foods.

“In the Japanese shops in the old days, before modern microbiology,” Christian says, “they’d take the grain and spread it out on the floor, and the wild spores in the shop would land on the grain. It was a totally indigenous, natural fermentation.”

Over a two-day process, Aspergillus oryzae metabolizes the grain — on the day of my visit, it’s rice — turning it into koji. (In addition to miso, koji is also the starter catalyst, or ‘mother,’ of sake rice wine, rice vinegar, and mirin).

The koji is transferred from cooling tables into the crib, where it remains overnight. As the mold grows, it generates heat — in fact, the fermentation raises the temperature in the crib from roughly 80ºF to 95ºF.

The next day, the koji is stirred in the crib, then scooped into wooden trays, where it is stirred again a few hours later. By day three, a felt-like growth of white mold is clearly visible on the surface of the grain. The mycelia of the mold binds the grains together in clusters, so that handfuls of the koji must be crumbled and strained before South River Miso’s workers mix it with sea salt.

That salted koji is mixed with beans, which have been slow-cooked and crushed into a bean mash. Since we’re talking traditional methods here, you may be able to guess how those beans turn to mash: underfoot.

Workers tread on the beans, wearing two pairs of organic cotton socks and plastic foot coverings. All miso was made this way in Japan right up until World War II.

The mixture of koji and beans is also primed with a sample of miso that has already matured. So it is that this living culture is passed down through the centuries, from one batch of miso to the next.

“It’s akin to a sourdough bread-making process,” Christian explains. “Each time a new batch of miso is made, a former batch is added in. It continues this lineage of evolving organisms.”

And voila: beautiful, chunky raw miso. It’s chunky, of course, because it hasn’t been machine-ground in an industrial food factory.

“You know how, when soil has been abused, it loses its texture?” Christian says. “Same in the miso. When you have whole beans and mashed beans and grain like this, it allows for more movement of fluids in the mixture, which adds complexity of flavor.”

The raw miso is transported to another building on the farm, where the fermentation vats lie in wait. Each vat is made of cypress wood. The biggest ones hold 7,500 pounds of miso at a time. In these vats, the miso ages anywhere from three weeks to three years, depending on the variety and salt content

The vats are filled, then covered with muslin cloth. A wooden pressing lid and heavy weights are placed on top, which draws the liquid to the surface. That liquid barrier seals off the miso from the outside environment — “so it’s an anaerobic fermentation,” Christian says. “Like sauerkraut.”

Eventually, the miso will be harvested, taken back into the building it was born in, and packaged in glass jars. But the dark silent process in the crib, and in these vats, intrigues me more than the world of packing, shipping, and marketing. Miso is humble, quiet stuff, but its history is sacred — an organic miracle, lovingly sculpted over millennia, of the sort that modern eaters all too often overlook.

During our tour, Christian picks up a few dried soybeans and holds them out to me. “Just to remind us,” he says, “there’s a whole plant, and whole generations of plants, contained in each seed. We’re dealing with life, even though it seems inanimate. That’s part of the problem we’re dealing with, I feel, in terms of our health and illness.

“We’ve totally lost our relationship with this as modern people,” he says. “In modern food-making, soybeans are called commodities. So is rice. They’re treated as things, as material objects. But they’re not things at all — they’re alive, they have being, they carry life.”•