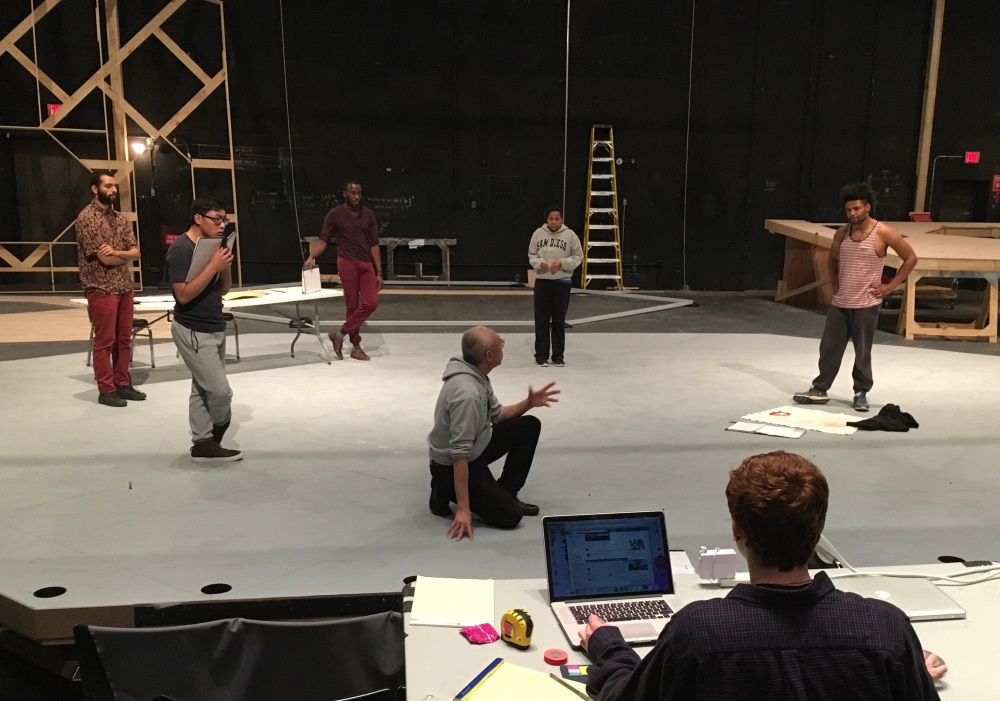 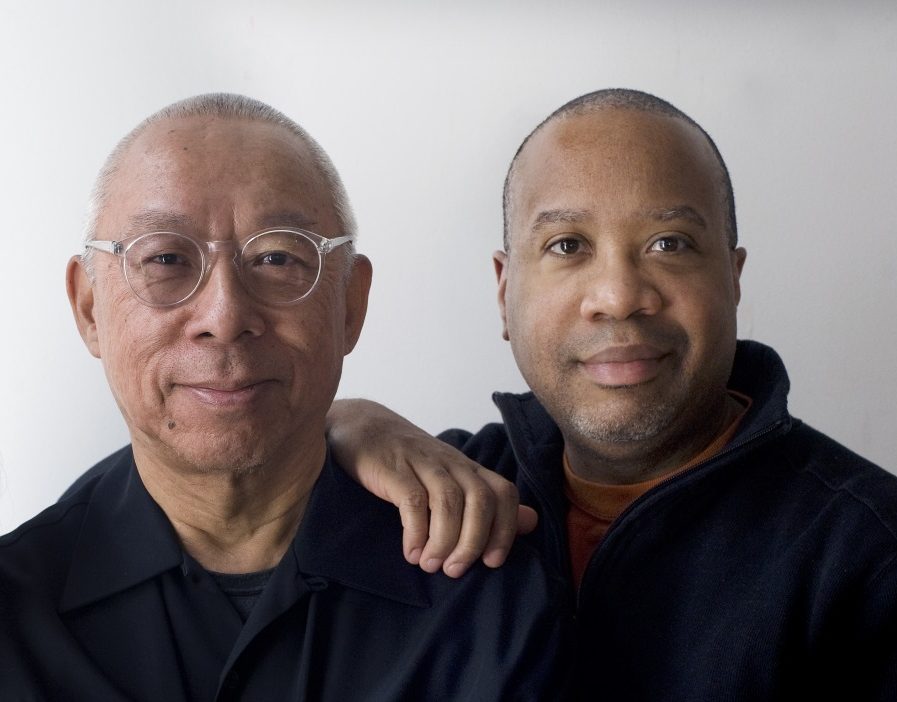 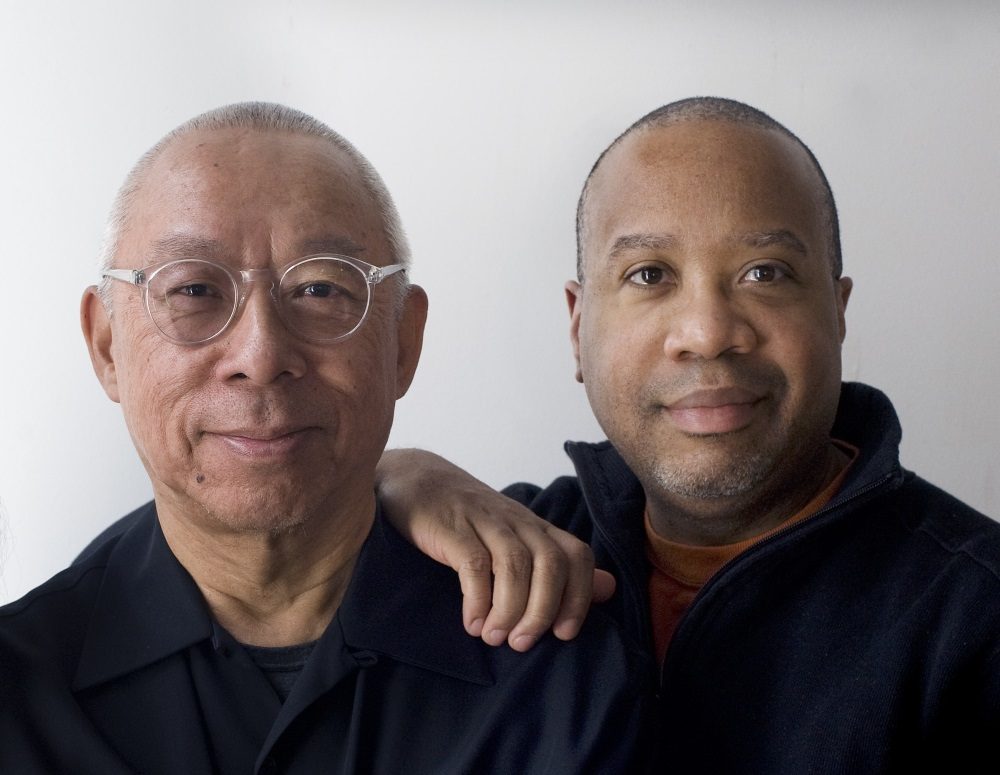 In some ways, the vigilante shooting of Trayvon Martin in 2012 can feel like the first in a series, soon followed by more headline-grabbing murders of young African Americans — as if Trayvon’s death, and George Zimmerman’s acquittal, launched and licensed the police executions from Ferguson to Baltimore.

But Ping Chong sees that event not as a beginning so much as an inevitable outcome. He’s the visionary co-creator of Collidescope 2.0: Adventures in Pre- and Post-Racial America, an episodic multidisciplinary theater piece that, as the title implies, sets a kaleidoscopic tour of race relations in the United States on a collision course with history.

The show is the culminating event in a two-year project titled Art, Legacy & Community, led by UMass theater professor Judyie Al-Bilali and aimed at using theater “to assess, stimulate and inspire a community’s collective voice, its joys and its frustrations.”

It opens this weekend in a theater just yards away from the Fine Arts Center plaza that was defaced by anti-Muslim messages last week.

As Chong explained to me recently, “Originally I was going to make a work around Trayvon Martin, but then I saw an obscure video of a lecture James Baldwin gave in London which inspired me to do something different … to create a work consisting of evidence of America’s race history that could only lead to the death of Trayvon Martin.”

This is no illustrated lecture. It’s a fact-based sci-fi fantasy that imagines a group of alien time-travelers, cosmic anthropologists “scrolling through their intergalactic Rolodex on the subject of racism in America and citizenship,” Chong said. “I want the audience to see through the eyes of the aliens, the better to see the madness of racism.”

Collidescope 2.0 is a modified reboot of the original version, which premiered at the University of Maryland in November 2014, just three months after the shooting of Michael Brown that ignited the streets of Ferguson. For this production, the aliens’ Rolodex also includes files relating to close encounters on our own doorstep.

The show’s co-creator is director and dramaturg Talvin Wilks, onetime artistic director of the late lamented New WORLD Theater. The other night I sat in the Rand Theater as Wilks was staging a scene titled “Campus Unrest/Kill These N*****s,” its script drawn from verbatim reports of racial violence on the UMass campus from the sixties to the present.

One, from 1988, involves an attack on a Latino student by several white men; another details the 2008 case of Jason Vassell, attacked in his dorm room but charged with assault for defending himself; in another, students confront the administration with a list of demands (“more diversity on campus, more faculty of color, police sensitivity, cultural studies, black studies…”) and are answered with promises of “investigations,” “forums,” and vows “to do better.”

During a break, Wilks described the “conceit” behind the show’s structure. The set, by New York designer Mimi Lien, represents the “holodeck” of the alien spacecraft, its walls punctured by diamond-shaped portholes that double as projection screens where we see flashing historical images and scrolling readouts of those cyber-Rolodexes identifying time, place and topic of the events the aliens are investigating.

They begin with the image of Trayvon Martin’s body on the ground, then flash back to 1774 New England and the signatories of the slaves’ petition to the Massachusetts legislature for emancipation, then to a sequence adapted from a 1957 short story by Richard Wright, a surreal tragicomedy about an unemployed black man who disguises himself as a woman in order to get the only job available: as a cook for a white family. Other vignettes include a forgotten episode from Amherst history, when Edward Dickinson, father of Emily, defended two black men accused of “kidnapping” a ten-year-old servant girl to keep her from being sold down South into slavery.

A key aspect of the scenes is that many of the character assignments for the diverse, multitasking ensemble are made without regard to race or gender. White people play black people, men play women, and vice versa. In the UMass campus scene, for instance, we see an Asian student playing a Latino, and hear a black woman playing a white man, yelling “Get the hell out of here, Cuban bastards!” Part of the intention, Wilks told me, was to “break the trap of a particular kind of objectification. It also takes away the sense of ownership” of racial and sexual identities.

And part of it, he added, is “an alien conceit.” From the vantage point of deep space, “we all look alike.”