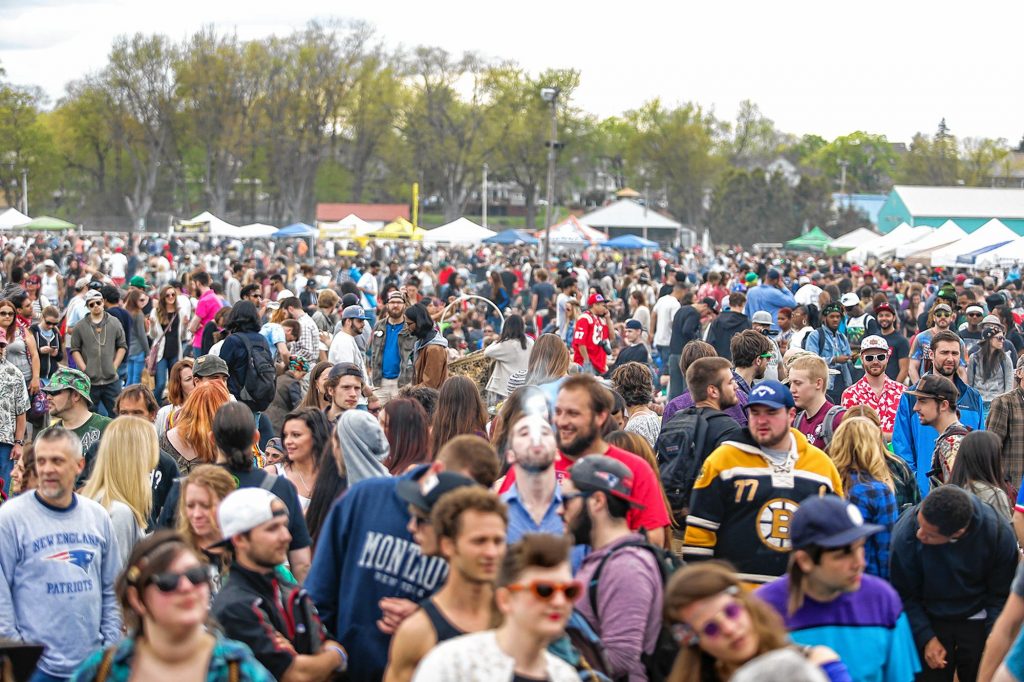 At Extravaganja 2016 at Northampton’s Three County Fairgrounds, the crowd is as high as the marijuana-leaf balloon floating overhead. About 24,000 red eyes look on as local musicians blast out funky jams and marijuana-tinged tunes. Police officers meander in pairs around the perimeter.

Though there’s no shortage of customers at donut carts and french fry vendors, grape is the flavor of the day.

“No pun intended,” says his friend Henry Brechter with a laugh, passing along a grape-flavored tobacco leaf rolled around a lot of marijuana — a blunt. “Make sure you say we were smoking good shit.”

A group of 20-somethings pass around a gorilla finger that overwhelms their faces — the giant joint has about $200 worth of marijuana inside, they say.

Munchers work on mountains of nachos and french fries, while others take their food on a stick — corn dogs and skewers leave a free hand for joints.

By mid-afternoon, a pine-bacon-skunky smelling cloud hovers above.

Mandy Pachios of the Mary Jane Jones celebrates the plant that gave her band its name, belting it out onstage as part of Llama Lasagne, a conglomeration of about a dozen local bands. People in the crowd pass around blunts to the whomp of the bass in the tune, “Everybody Must Get Stoned.”

“I only sing songs with words I believe in,” Pachios says after the set.

Bonus I Spy!
— How many joints can you spot in this photo?
— One point for each marijuana leaf you see.
— How many sunglasses can you spot?
— Spy the glass bong.
— Find a man with no facial hair.