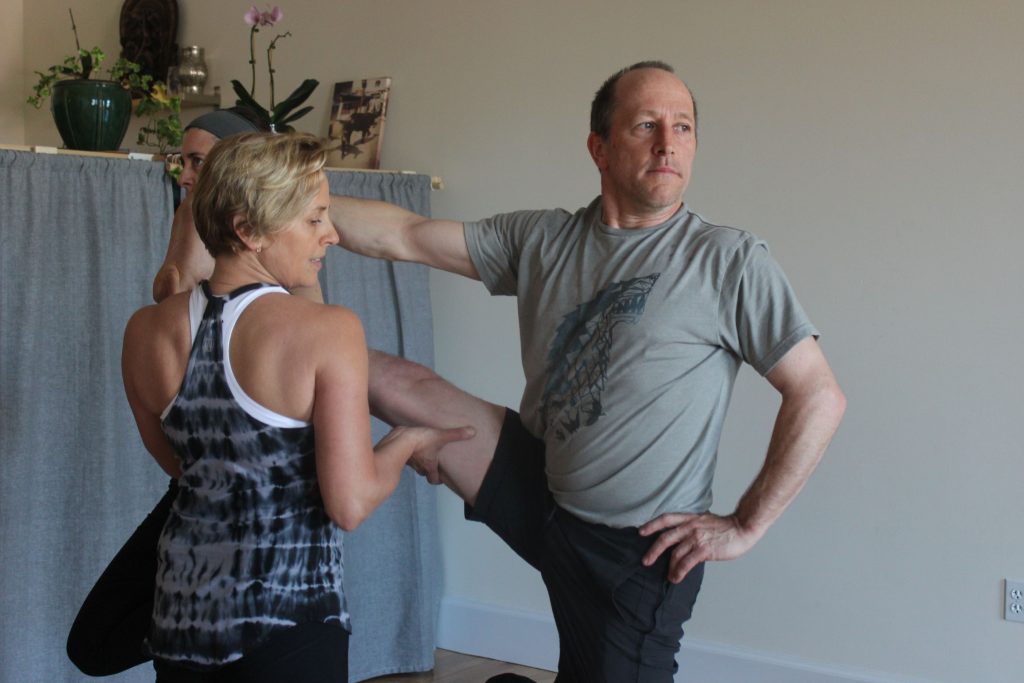 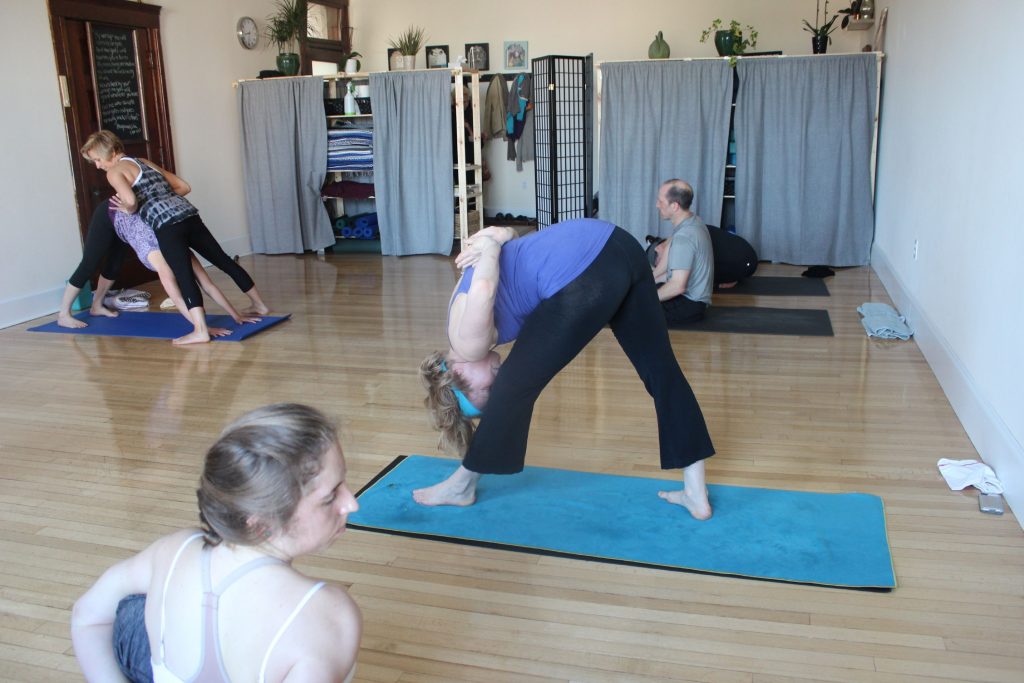 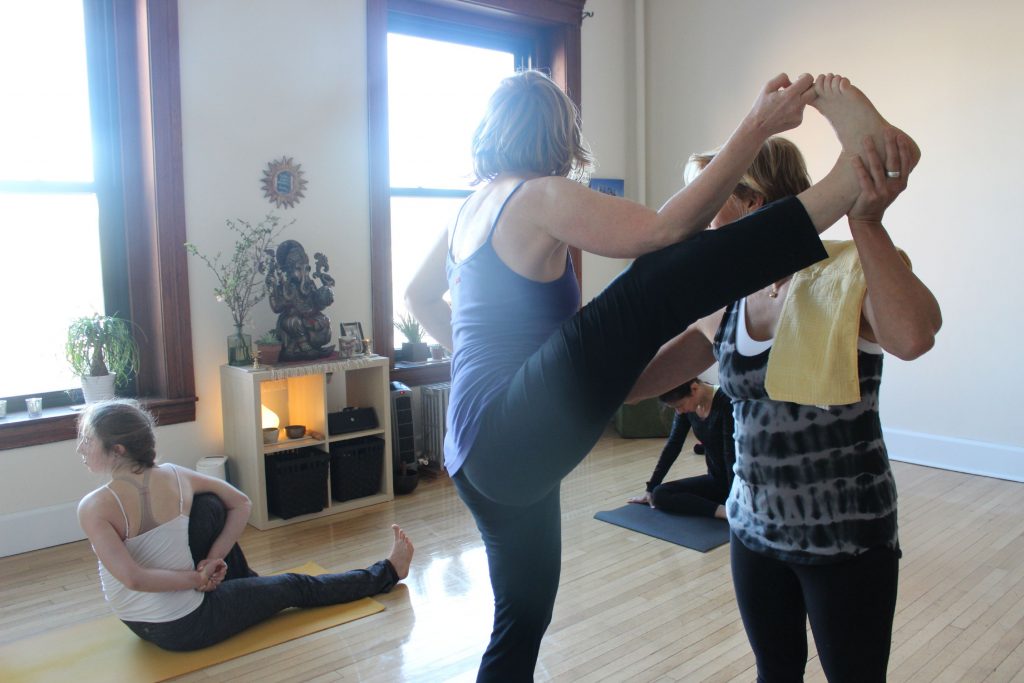 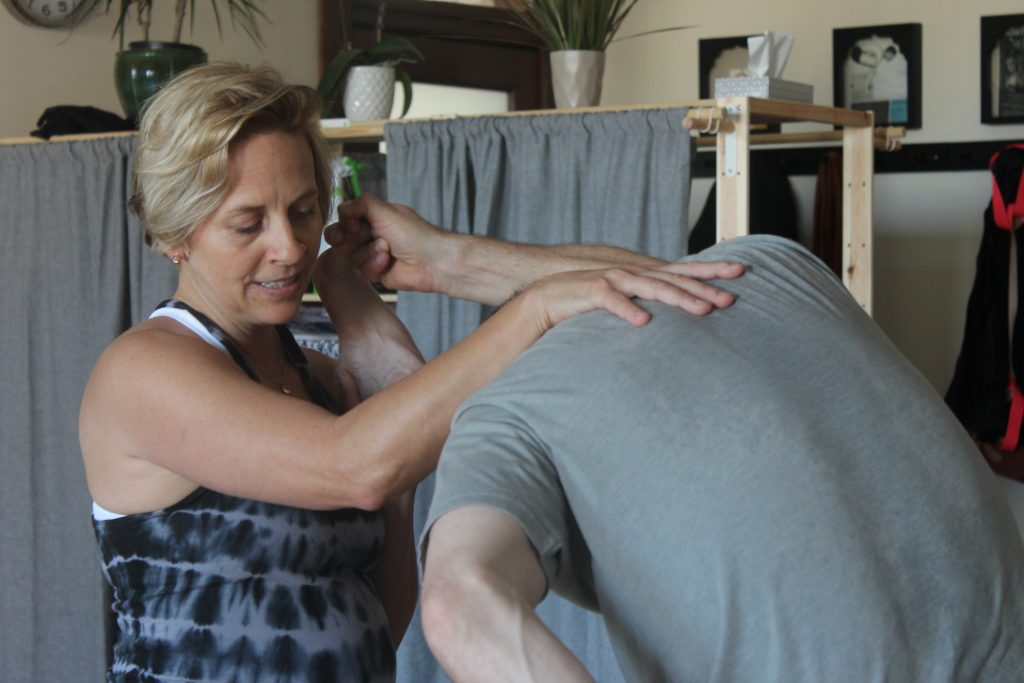 And that’s not because Ryan, founder of Ashtanga Yoga Northampton, hadn’t done yoga before — she’d done it for over 15 years — but because it took working around the spasms to show her the correct alignment.

Now she incorporates the bodily wisdom gleaned from her physical struggle into her teaching of Mysore, a repetitive, personalized style that’s essentially private instruction in a group setting.

A lot of us learn yoga in large-class scenarios. We blow past the basics and teach our muscles habits that aren’t always best. At a Mysore class with Ryan, however, no pose goes without a hands-on adjustment. She’s built a cooperatively-owned studio around helping people forge a more individualized practice that works for their bodies.

Ryan’s mastery was born of problems stemming from her intrauterine device. For years she struggled with chronic pain in her lower back and limited mobility in her legs, issues she says were caused by a combination of her Mirena, which she got in 2005, and the havoc wrought on her abdomen by multiple births in quick succession. Her stomach muscles, she says, weren’t strong enough at the time to support the added pressure from the IUD on her lower back.

“I was like an old woman,” she says. “I couldn’t even do yoga and I was depressed as hell.”

She went from being very flexible, moving through asanas no-problem, to barely being able to move. She had to re-teach her body to do yoga, she says, slowly nursing her wounds and willing herself back into normal functioning.

“As soon as I felt a spasm I would stop,” she says. “That’s actually what taught me to do the postures correctly.”

At the time, she was teaching at her former studio, Florence Yoga. There, she says, she taught a couple of Mysore classes but mainly taught led classes. She says the large-class, led-style of instruction wasn’t fulfilling for her.

“I just didn’t feel like I was helping people,” she says. “There was this anonymity to it.”

At the same time, the building that housed her studio was being sold and so she started looking for spaces downtown, where she saw an opening at Clinic Alternative Medicines. She taught Mysore classes there for about two years before moving the studio into a space of its own just about two months ago.

Mysore classes are held in three-hour windows, from 7:30 a.m. to 10:30 a.m. most days. Students come and go from the quiet, music-free space at their leisure.

Trying it out for the first time, I arrive around 9:30 a.m. and set up my mat along the wooden floor. Sounds of oceanic breathing and whispered instruction fill the naturally lit room. Ryan greets me, asks about my yoga experience and teaches me a sun salute. While she helps her students, I repeat the sequence a few times, and then she returns to teach me another, gently moving my body into the right positions.

Not long into the class I feel like I’m getting over my yogic plateau — even my downward dog feels better adjusted with Ryan’s attention to bodily detail.

Like a musician learns scales, Ryan teaches her students to slowly and steadily incorporate new asansas, or yogic sequences, into their practice. Wrong notes happen along the way, she says, but repetition builds the foundation.

“I love seeing people find wellbeing and work toward a potential that surprises them,” she says. “Ashtanga teaches you courage — you end up surprising yourself with the things you can do. But it’s not about waking up one day and saying, ‘I’m going to put my foot behind my head’ — it takes years.”

This is how yoga was made to be taught, she says. As yoga moved into mainstream America, she says, we largely stripped it of its individuality and spirituality. “Americans tend to appropriate things for economic benefit,” she says. “I’m trying to help you become your own teacher. I’m actually teaching you so you don’t have to come in — it’s a completely different way. I want you to not depend on me.”

Teaching Mysore, Ryan is able to get to know everyone’s body — their strong points, their weak points, their scars — and help them modify accordingly. She also gets to know where students are at and when to push them.

“Most of it is hands-on transmission,” she says, like when she was teaching a student last week how to do chakrasana, a backwards summersault. “She was really afraid of it and I knew she could do it,” says Ryan.

Before opening her first studio in Florence, Ryan says she worked off and on as a painter and was a full-time mom, or “chief cook and bottle washer.” Like the mom she is, Ryan nurtures her students, lovingly watching for ways she can be of assistance. Her presence is calm, and though she’s typically coaching more than a dozen students at a time, she has a way of making you feel like the only person in the room.

Ryan became interested in yoga and India after reading The Razor’s Edge as a preteen. In early teen years, she says, she grew increasingly interested in spirituality and religion, especially in hinduism. “I probably did yoga in a past life,” she says. “And I probably lived in India in a past life, if you believe in past lives.”

Having a successful practice, she says, is all about consistency and reverence.