The Beerhunter Abroad: Japan – Land of the Rising Suds 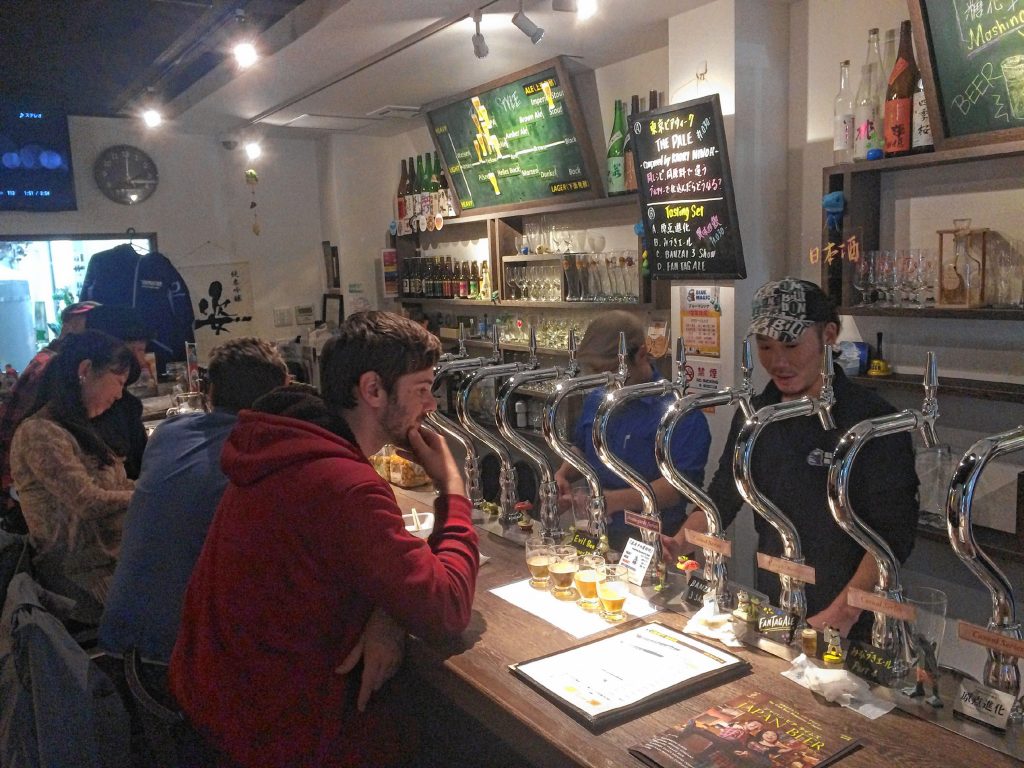 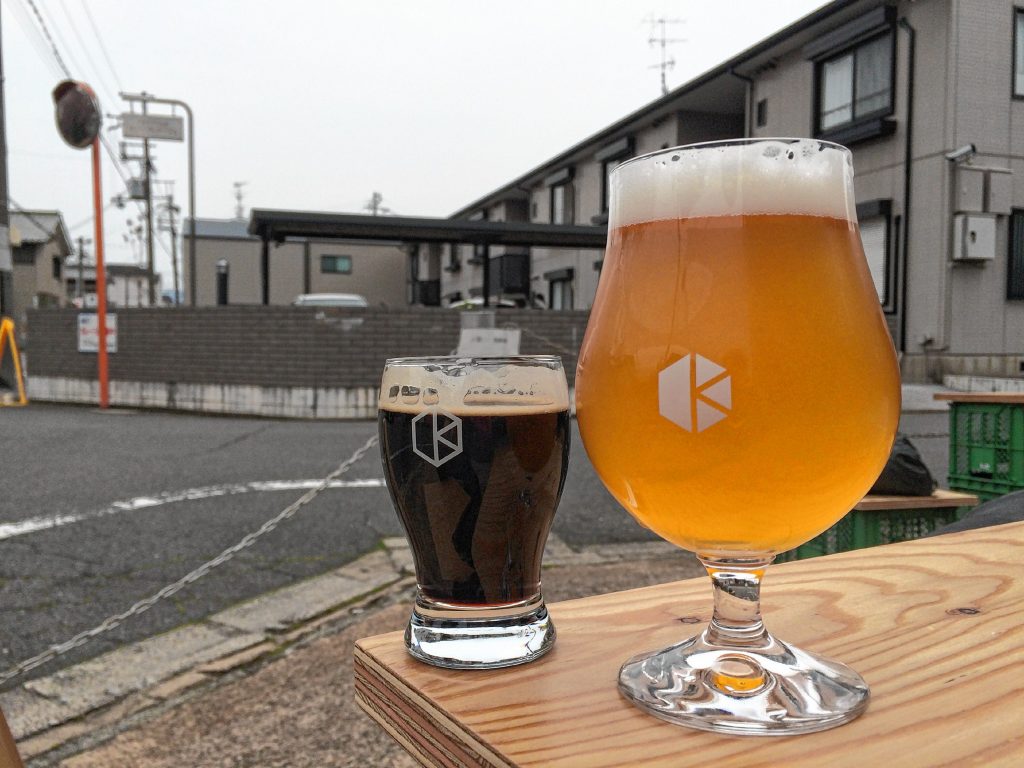 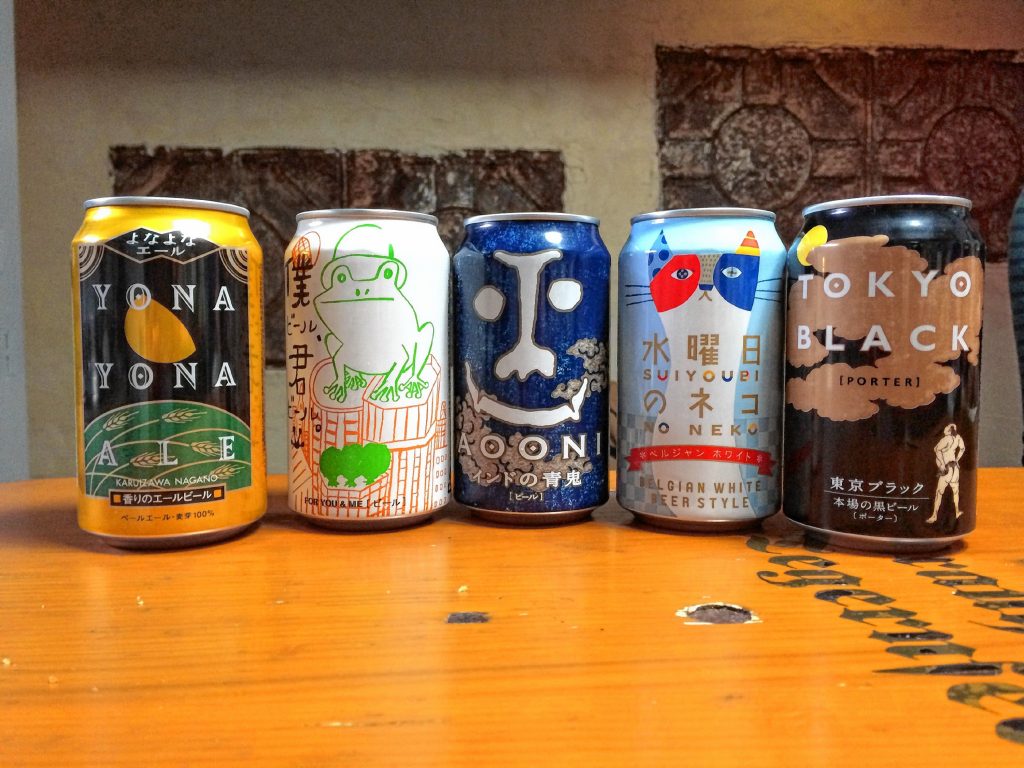 After dark, standing in a 24-hour convenience store in downtown Kyoto, I scanned the rows of canned and bottled beers in a bright refrigerated case. Virtually everything on offer was a product of one of the “big four” Japanese breweries: Sapporo, Suntory, Asahi, and Kirin — all of which are available in the United States. This was discouraging. As in my last installment of Beerhunter, Abroad! — in which I wandered the streets of Cusco, Peru — I’d arrived in search of something quirky and unique to drink, not another offering from an international beverage conglomerate.

Then I spotted a handful of colorful 12-ounce cans toward the fringes of the display. These five beers looked to be a set, and in a way they were: all are made by Yo-Ho Brewing, a company founded in Nagano in 1996. As easy and refreshing as a bottle of Kirin Ichiban can be, I opted to grab these cans, crack them open at the guesthouse, and dive into the world of Japanese craft beer.

Japan is the world’s 7th-largest beer producer, according to a 2013 report by Kirin Holdings. But until 1994, Japanese tax laws set minimum productions limits at two million liters per year — ensuring that the “big four” national breweries stayed on top of the market with almost no domestic competition. But after 1994, when the minimum production limit fell to 60,000 liters per year, Japan saw a sudden surge in craft brewing. Yo-Ho helped to blaze that trail, led by founder Keiji Hoshino — who drank his first craft beer as an exchange student in America — and former head brewer Toshi Ishii, who learned his trade at Stone Brewing in California.

Yo-Ho’s investment in American-style craft ales is immediately apparent, and while its products, which are available in the States, aren’t unusual enough to wow American craft beer lovers, the line-up is light years ahead of Japan’s mass-produced light lager. Yo-Ho’s Aooni IPA is sweet and tart, the Suiyoubi No Nako is a really solid Belgian-style white, and the smoky, roasty Tokyo Black is an exemplary porter, regardless of which country you drink it in.

I shouldn’t be surprised, Chris Hainge told me. Hainge, a native Virginian who has lived in Kyoto for seven years, is one of the founders of the one-year-old Kyoto Brewing Company, which I visited the next day.

“There was a first wave of craft brewing that came and went in Japan, similar to what happened in the States,” Hainge explained, referring to the emergence of once-small breweries like Sierra Nevada, Sam Adams, and Harpoon — founded in 1980, 1984, and 1986, respectively — that are now cornerstones of the American craft beer market. “There’s a second wave happening now, and we were able to start during that upswell.”

If Yo-Ho is a first-gen Japanese craft ale company, newcomers like Kyoto Brewing are second-gen, and their methods are more refined. Kyoto Brewing — which is run by an American, a Canadian, and a Welshman, and distributed throughout Japan — offers excellent takes on styles familiar to Westerners, like stouts, wheat ales, saisons, and porters.

It’s small but talented operations like this, popping up in Japan over the past decade, that have prompted more and more American brewers to fly over and collaborate. Kiuchi Brewery in Naka, which makes a good line of craft ales called Hitachino Nest, is the contract brewer for Brooklyn Lager in Japan. Coedo Brewery, based outside of Tokyo, has collaborated with Ballast Point. Baird Beer, based in Numazu, has worked with Stone. As of 2016, Japan is home to several hundred craft breweries. In Tokyo alone, there are now over 80 small-batch brewpubs, according to Bloomberg.

In the Shibuya neighborhood of Tokyo, I sought out a bar called Goodbeer Faucets — which boasts 40 draft taps — and sampled beers made by Baird, by North Island Beer in Hokkaido, and by Nide Beer in Kanagawa (whose Yuzu Dream fruit ale is appealingly zingy). At Bungalow, a craft beer bar in Kyoto, I enjoyed a rice lager by Swanlake, a gose sour ale by Ushitora, and an IPA by Shigakogen.

Even off the beaten path, craft beer is bubbling up. In Utsonomiya I visited the small brewery Blue Magic, which landed me a hearty pour of imperial raspberry stout — the sort of beer I would expect to try in Denver or San Diego, not in a small provincial Japanese city that invites little tourism.

But of course, that’s the heart of the new movement. Twenty years ago, many Japanese companies dashed through the busted gates of old regulatory laws, trying (and mostly failing) to become destination spots by cranking out slapdash imitations of German Kolsch beers, British bitters, and American IPAs. But now, years on, the barley dust has settled in Japan, and the newest local companies are brewing for the audience that matters most: themselves.

– The Brewers Association has announced the winners of the 2016 World Beer Cup, presented at this year’s Craft Brewers Conference in Philadelphia. This year, seeking a gold, silver, or bronze medal in each of 96 categories, 1,907 breweries from 55 countries entered 6,596 beers for judging, which is done by a panel of 253 judges from 31 countries. New England breweries only won a handful of Gold medals this year — notably Medusa Brewing Co. in Hudson, Liquid Riot Bottling Co. in Portland, Maine, and two Connecticut breweries: Stony Creek Brewery in Branford and Black Hog Brewing in Oxford— but craft beer fans should browse the full list of winners at brewersassociation.org.

– The busy bees at Lefty’s Brewing in Greenfield have put together some great fun for the afternoon of Saturday, May 21. It’s the Spring Fever Brew Fest, held at the Franklin County Fairgrounds, featuring a huge biergarten, food, local vendors, games, raffles, and live sets by Bella’s Bartok, AfterGlo, and Trailer Park. $5 presale; $10 at the gate, with $2 and $4 drinks inside. 21+. Visit leftysbrew.com for more details.