My Porch or Yours? Montague Music Festival Marks Second Year 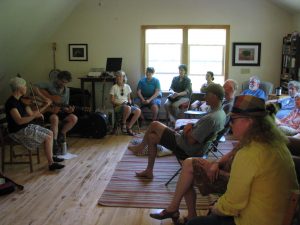 House shows have always been an important part of the DIY music scene.

Whether it’s some garage rockers providing the soundtrack to a backyard party, a punk rock band playing a concert in a basement or even some indie folk musicians holding court in a living room, the result is the same – people getting the opportunity to listen to live music in an alternative, sometimes more comfortable setting, rather than in a bar or club.

Last year, music fans in Montague played audience to a collection of house shows held as part of the “Good Music Makes Good Neighbors” Montague Music Festival. Organized by Nicole Nemec and Matthew Duncan, the event aimed, the pair said, “to create the kind of community that we say we want to live in – the kind of community where we’re not only sitting inside watching a screen or listening to commercially-streamed music, but where there exists a non-commercial alternative.”

Now the event is back for a second year. 12 acts will set up shop in four homes around Montague Center on May 14, and those interested in checking out the fun can walk, bike or drive, between locations to see live music up close and personal.

Since it consists of multiple concerts, some indoor and some outdoor, held at multiple houses spread throughout a neighborhood, “Good Music Makes Good Neighbors” is similar in its execution to events called porchfests, which are held throughout the country each year.

The original porchfest, which gathered local musicians to perform on neighborhood porches to share their talents with the community, is believed to have been held in Ithaca, N.Y. in 2007, and according to one of that event’s co-organizers, Andy Adelewitz, the mission of such events boils down to one goal. 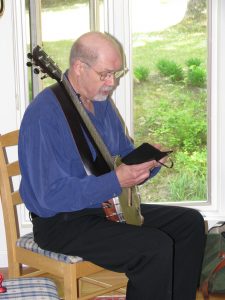 “Celebrate our musical neighbors,” he says. “Whether it’s professional bands who play the biggest clubs in town and tour around the country, or the father-daughter folk duo who won’t play another gig all year.”

Nemec and Duncan agree. By sharing some of the music the pair discovered in their own community, they now hope to shine as an example of how other neighborhoods can act as well.

Duncan says, “I’m quite encouraged by the trends toward more local musical interaction. It is a part of our cultural heritage that has suffered in the era of earbuds. I’m passionate about the music for its own sake, but in addition music really does bring people together in ways that wouldn’t happen otherwise. It connects people across class and social divides. It’s not that people have stopped playing. In fact, some of our participants perform regionally and nationally, but their neighbors might not know it. We’d like to be a part of the remedy.”

Jamaica Plain Porchfest organizer Mindy Fried is also a big supporter of bringing people together across race, culture and class divides through the power of the arts.

She says, “We believe that porchfests give people from all cultural and economic backgrounds – within a community – an opportunity to experience a sense of connectedness. For the artists, they can express themselves through their art, and for some, they choose to voice their perspectives on critical social issues through music.”

“There is talent in unlikely places,” she adds. “Through organizing Jamaica Plain Porchfest, we have discovered talented musicians and other artists are everywhere, but there are not enough opportunities to perform. Porchfest gives artists an exciting opportunity to share their talent to a welcoming audience.”

According to some performers, who played at last year’s “Good Music Makes Good Neighbors” event, audiences in Montague were very welcoming indeed. 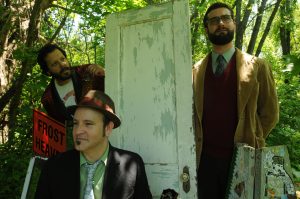 Greenfield singer/ songwriter Daniel Hales, who is scheduled to perform in Montague this year with his band Daniel Hales, and the frost heaves, says “It’s a great concept, stripped of the pretensions that often mess up the vibe at ‘official’ venues. We actually made more money from donations and sold more merch [last year] than we often do at club shows.”

“The Montague Music Festival is a real manifestation of what it means to foster community,” notes Leo Hwang, who performs again at this year’s event as part of the instrumental jazz, funk, and psychedelic rock group Vimana. “It is a way to build connections between neighbors, and then share that connection with others who visit Montague.”

For now, Nemec and Duncan are content to keep “Good Music Makes Good Neighbors” a small, neighborhood event, though they have received significant interest from folks interested in hosting bands and artists in years to come. Nemec also notes that plans are in the works to one day feature some non-musical acts too, such as local Morris dancers. There has even been some talk of including an open stage where attendees can pick up instruments and play if the mood strikes them at the event. Last year’s festival achieved an estimated attendance of 75 people, and many are expected to return this year, including some fans driving all the way from Connecticut.

Duncan says, “We’d like to make sure that we have a good sized audience before expanding too much. We are trying to grow in a way that is neither too fast nor too slow. If we had 10 houses, 30 bands and a very sparse attendance, that would be demoralizing. If we had three houses, nine bands and big crowds, it would feel claustrophobic. The balance is critical.”

Pairing the dream of a festive afternoon out in Western Massachusetts, where music is heard drifting from house to house as you walk or bike through the beauty of nature, with the more active notion of building a sense of community in a neighborhood of artists and musicians sounds like a challenging juggling act for even the hardiest of DIY-enthusiasts. But the success of even small events like “Good Music Makes Good Neighbors” can often be worth all the hard work and toil.

“A community economy is made up of the personal exchanges, the sharing or gifting of music, the opening of living rooms and barns, and a chance to enjoy a diversity of artistic expression,” Hwang says. “The Montague Music Festival fosters the kind of world we would like to live in.”