Oh, Honey: Can spoonfuls of the all-natural sweet stuff help ward off allergies? 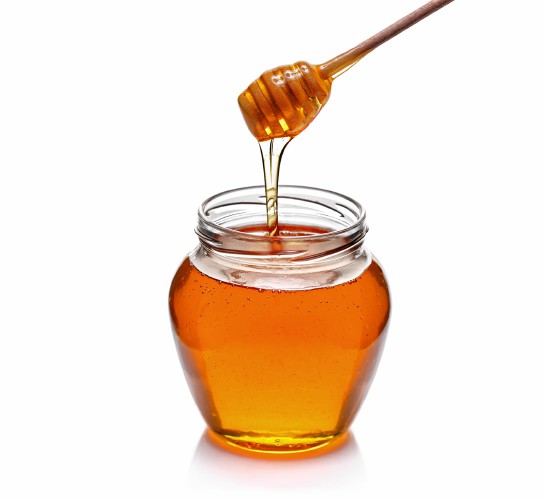 Jar of honey with wooden drizzler

Ah, spring: The time of year when nature wakes up from its deep winter slumber: birds are singing, flowers are blooming, and allergy sufferers are miserable.

A runny nose, itchy eyes, and constant sneezing are facts of life for the nearly 8 percent of Americans that suffer from allergic rhinitis, commonly known as hay fever, according to the U.S. Centers for Disease Control and Prevention. More than a minor nuisance to some, seasonal allergies can be dangerous. They can exacerbate asthma and cause difficulty breathing in susceptible populations.

Seasonal allergies are a problem that have likely plagued cavemen, they can generally be thought of as a case of mistaken identity. The first time someone encounters an allergen, his immune system may identify it as something harmful. Lymphocytes, or B cells, respond by producing an antibody, which white blood cells use to bind to allergens in the body. When that happens, histamine— the chemical that causes your eyes to itch, nose to run, and for you to generally become a snotty mess — is released.

So, what can we do about it? Most people are familiar with brand-name medications like Allegra, Claritin, or Zyrtec, and their cheaper generic equivalents. All are relatively new second-generation antihistamines that promise effective allergy relief without making the user sleepy. First-generation drugs like Benadryl are highly effective, but tend to knock people out. Nasal corticosteroid sprays offer relief too, but may have long-term side effects. Immunotherapy, or allergy shots, can be an effective long-term treatment for sufferers that don’t want to take medications forever and are okay with enduring weekly injections for six to seven months, and monthly ones after that for a few years.

It’s little wonder that allergy sufferers have sought out more natural remedies. Eating local honey has often been touted as one such remedy. The theory goes, according to proponents, that the same pollen we’re breathing in is found in small quantities in local honey. By consuming it, we’re building up our tolerance— essentially the same concept as immunotherapy. But does it work?

“So if you’re taking local honey, what you’re doing is eating pollen,” Bayuk says. “If you pasteurize it, then it’s going to destroy the pollen. That’s an oral way of trying to desensitize yourself. It may help, but you need a lot.”

In fact, he says, it would likely require so honey much that any benefits derived from it are likely to be offset by the mass quantities of sugar that would be consumed in the process.

“Basically I don’t think that it works,” says Dr. Robert McGovern, another board-certified allergist. “I think there’s a tremendous psychological benefit that you can get from eating honey, but I mean, there’s no scientific evidence that that’’s an effective treatment for people that have seasonal allergies.”

One additional thing to consider is the fact that most of the plant species that are responsible for making us sneeze are not pollinated by honeybees, but by the wind. Any of that kind of pollen that serendipitously ends up in the honey is likely to do so in very small quantities. One UConn study found no evidence that honey did anything at all to help allergy sufferers — even the local, unfiltered, unpasteurized stuff.

Naturopathic and homeopathic remedies abound. Both Bayuk and Van Stee say that, while they do occasionally run across patients that seem to derive some sort of benefit from them, there’s not a lot of data to back up their efficacy.

“A lot of the supplements and things that are recommended by non-allergist folks are very expensive and don’t have a lot of data behind them,” Bayuk says.

“…those things are not well studied in a way that is a double-blind, placebo controlled kind of study that we might expect from a scientific standpoint to be the standard,” Van Stee says.

Also, pollen from different plant species can be viewed as distinct allergens, and the way they affect each individual will vary. A person who’s sensitive to pollen from oak species may not necessarily be susceptible to birch or ragweed. Here in Western Mass, we’re currently in the transitional period from tree pollen season to grass pollen season. Different pollen types will trigger reactions in different patients, says Dr. Vanessa Van Stee, a board-certified allergist and immunologist at Allergy and Immunology Associates of New England.

“When we test… we’ll look at multiple different kinds of pollens,” Van Stee says. “Amongst some of the species there is cross-reactivity within the families. Grass pollens will cross-react with each other, so if you’re allergic to one, you’re likely to react to the other, but that’s not always the case.”

So, for the person to whom seasonal allergies are annoying at worst, it seems like antihistamines are still our most effective choice. Bayuk and Van Stee recommend being conscientious about avoiding pollen where possible. Change your clothes when you come inside, and point window fans out rather than in to avoid inoculating your living space. If your allergies are severe, they recommend seeing your primary care physician and/or an allergist to discuss treatment options.•