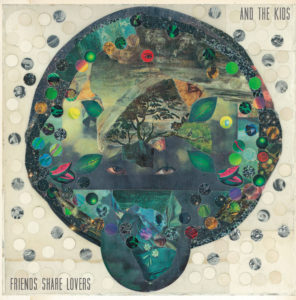 In the midst of graduation season in Western Mass, it’s easy to forget that graduation itself is about more than caps and gowns. Students, who four years ago were mere freshmen in high school or college, are now readying for their respective commencement days, which will launch them into the next stages of their lives.

Many are a bundle of nerves. Others are impatient. And still more are focused, confident and prepared to meet whatever challenges come next, with a zeal and aplomb that could only be the product of minds hungry to make their own dreams come true.

Similar descriptions could be used to discuss the members of the Pioneer Valley band And The Kids. Like the students mentioned above, And The Kids’ Hannah Mohan, Rebecca Lasaponaro, Megan Miller and Taliana Katz, started out four years ago with big dreams and ambitions. Now, with the release of the group’s second full-length album Friends Share Lovers on Northampton’s own Signature Sounds label, And The Kids is a band ready to graduate as well, into a world of indie rock stardom.

Recent years have seen the group buzzed about by more than Advocate writers and local music scenesters. Publications like the Boston Globe, the Wall Street Journal and Pitchfork.com, have all weighed in favorably on the band’s mature mix of indie pop and alternative rock, and that hype is justified on Friends Share Lovers’ opening track.

Beginning with a rapid-fire drum roll and vocals from Lasaponaro, “Kick Rocks” sees Mohan’s own voice emerge and blend with her drummer’s to create an enchanting harmony. The pair sing about moving on, and whether they mean from a relationship or a physical location, the message is delivered with unbridled energy. It’s a headlong introductory rush, and only the first stop on a tour of sounds to come.

The record’s second track, “I Dropped Out,” slows the pace. While its lyrics veer from slogans like “love is concentration” to more observational fare like “bodies walking over bodies that are sleeping,” the song hinges on Mohan’s wordless “ohs” and “ahs.” A slinky guitar solo even apes a similar melody with ear-catching results. And Mohan finally finishes the song by repeating the phrase “I went to graduation” over and over.

It’s important to note that many of the tracks on Friends Share Lovers were originally written by Mohan and Lasaponaro as a duo due to visa problems that are currently keeping Miller in Canada. But to show solidarity with their bandmate, the pair trekked north to record the album as a complete group resulting in a fully-realized product that expands on the core compositions exponentially.

For example, the record’s title cut is aided by a litany of studio effects that project the individual member’s talents into a sonic array that could not be duplicated without everyone’s input. Despite lines that seem to allude to the messy gray area where relationships and friendships start to overlap, the song possesses a sunny bounce that plays off the stacked electronic sounds and layered vocals.

Continuing the student/ school analogy from earlier, album finale “Pennies, Rice” could read as a fitting final exam or thesis project. The song employs a variety of percussion and rising sounds that melt into a cohesive whole. After an extended intro, an underlying melody takes shape as Mohan sings about her ability to “do what I want.”

Like many anxious graduates, the feeling behind Mohan’s words is palpable. Graduation does lead to a lot more freedom after all, but it also carries with it some weighty responsibilities.

“This track is about having all the freedom in the world,” Mohan has said. “But the only thing holding you back is your indecisiveness.”

Fortunately, as “Pennies, Rice” builds to its conclusion, a fitting metaphor is gleaned from the lyrics. Just a single word, “avalanche,” is sung over and over near the song’s end, and appropriately so. Like an avalanche, And The Kids is already rolling. Having built momentum over four years, and taken what it can from the area that spawned it, the band is moving on to bigger and better things. Call Friends Share Lovers a diploma to signify all that progress. The group has earned every word.