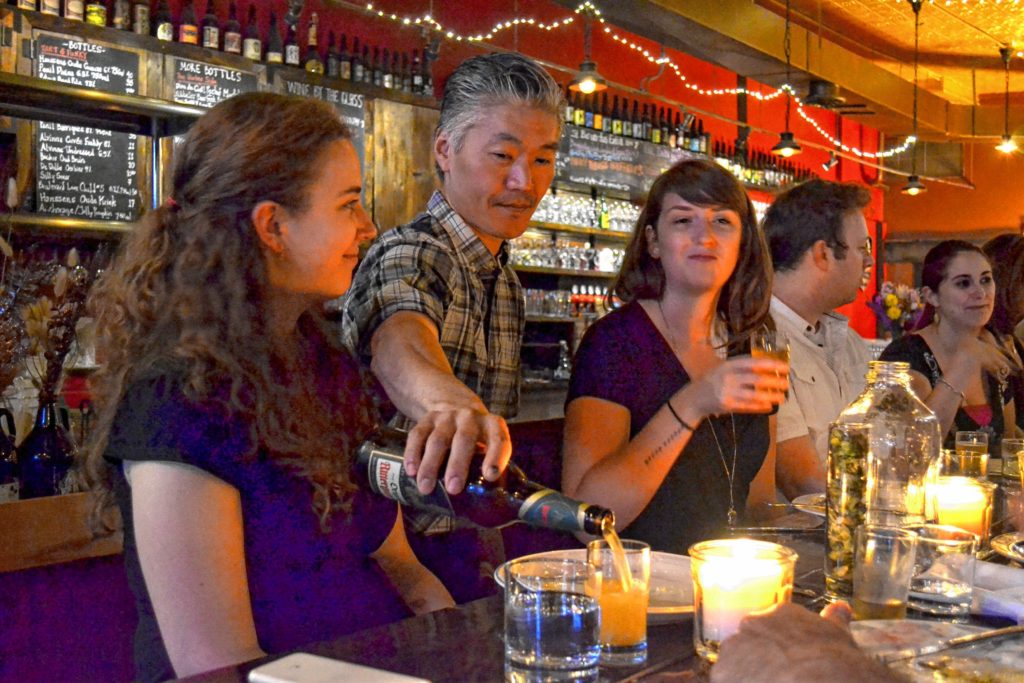 Sally Noble and Sonny Han co-own The Foundry in Northampton, one of many venues during Western Mass Beer Week. Hunter Styles Photo.

The Beerhunter’s ears are always pricked to news of local craft beer happenings, and this month, they’re positively tingling. All that excitement in the air is thanks to the first-ever Western Mass Beer Week, a series of events at breweries, bars and restaurants all around the Valley June 11-18. Eighteen breweries and more than a dozen eateries have teamed up to celebrate the beer brewed around here.

All told, 52 events are scheduled as of press time. Stay up to date on Facebook, and check westernmassbeerweek.org for more info.

In the meantime, here’s this beer lover’s first stab at a personal Beer Week to-do list. Hope to see you all there, and elsewhere, all week.

Berkshire Craft Beer Festival in Pittsfield: At the Common Park from noon to 5 p.m.

German Brunch: Presented by The Dirty Truth in Northampton, with German beers imported by Shelton Brothers. 11 a.m. to 3 p.m.

Learn to Cook with Beer: Chef Zach Shulman invites us to The Student Prince in Springfield, where he will make dressings, sauces, and dessert using a saison, two pale ales, an IPA, and a tripel. 6-9 p.m.

Beer Trivia at Plan B Burger Bar in Springfield: Test your beer knowledge, with local breweries on tap. 9-10 p.m.

The Foundry Firkin Faceoff: Five brewers were each tasked with turning a list of wacky ingredients into a quality cask beer. Come taste the results at the Foundry in Northampton. 5-10 p.m.

Honest Weight at The Moan and Dove: The new Orange brewery will be tapping a firkin and two pins at the Amherst bar, with additional beer on draft. 6 p.m. to 1 a.m.

The Dirty Truth Presents Lord Hobo Brewing Company: Eastern Mass brewer Daniel Lanigan comes home to the Dirty Truth in Northampton, which he co-founded, to raise a glass from draft, can, or cask. 7-10 p.m.

Firkin at the Brass Cat: Abandoned Building Brewery taps a new cask at the Easthampton bar. 6 p.m. to 1 a.m.

Patio and Pints: Brew Practitioners in Florence host outdoor pours, with a 7 p.m. set by The Tom Savoy Band. 5-10 p.m.

Local Focus Beer Tasting Seminar: Provisions in Northampton hosts tastes of 12 wide-ranging beers, paired with cheese and charcuterie. $35 per ticket, or $30 each for 2-plus tickets. 6:30-8 p.m.

• Magic Hat has finally run off and joined the circus. The Vermont brewery has signed on with Cirque du Soleil as the official craft beer of the Boston run of KURIOS, a “cabinet of curiosities” show that runs through July 10. What better way to kick back with a bottle of Circus Boy?

• In world beer news: the Belgian city of Bruges is building a two-mile underground beer pipeline to connect the downtown De Halve Maan brewery to its bottling plant. Once it’s completed this summer, the tunnel is expected to pump over a thousand gallons of beer an hour. Forget the opportunities to divert suds to all those local taplines – I’m wondering when they’re going to offer inner tube rides.•