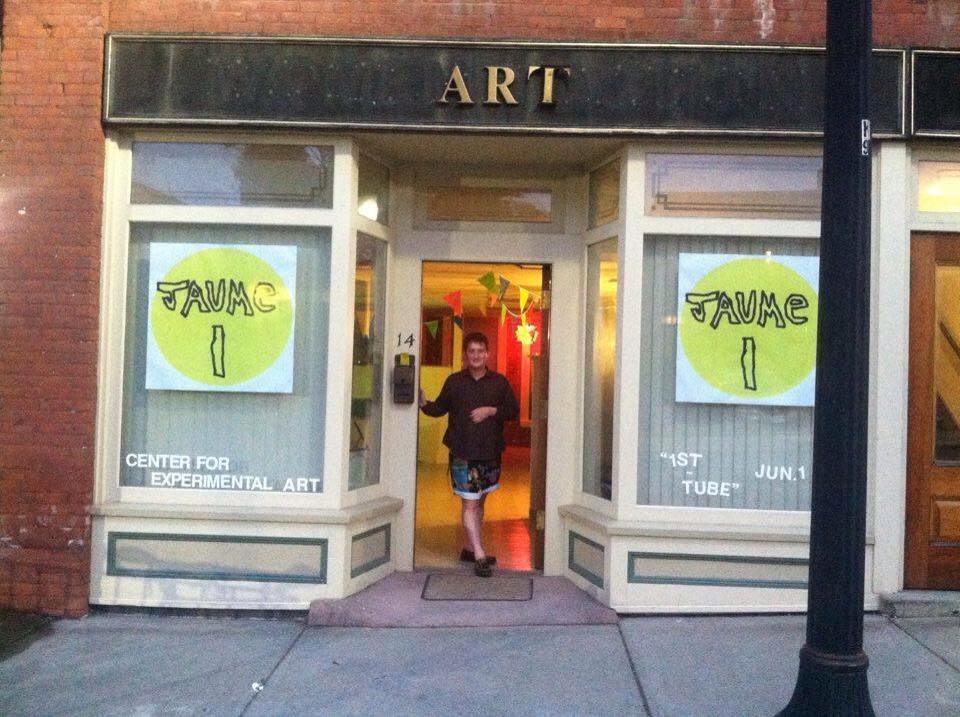 Matt Robidoux is nervous. He is sitting on a patch of grass in downtown Greenfield, adjacent to a municipal parking lot and the Mexican restaurant Mesa Verde. Across the street, a small handful of musicians are shooting the shit and smoking cigarettes, waiting outside a storefront with the word “ART” hanging above the entrance.

“I feel a little nervous about noise,” Robidoux tells me. “Of course.”

Jaume I is in a commercial space below a busy apartment building at 14 Miles St. In other words, the venue has neighbors who might not be thrilled about an opening week with four loud shows in a row.

That first night we play, neighbors express a gamut of sentiments, from ambivalent to excited. One woman, whom we initially think is coming to tell us to quiet down, actually wants to buy our (non-existent) CD. Another thanks Robidoux for “bringing life to the building.” Not bad, considering we were all bracing for the worst.

On the second night, Jaume I isn’t blessed with the same good fortune. As Florence punk rockers Thee Arcadians are setting up for a super gratuitous set with two drummers and three guitarists, and after a super loud shoegaze band from Minneapolis called Waveless plays, the cops show up and end the party early. If the noise continues, they say, Jaume I will be fined.

Luckily for Thee Arcadians, a member of the audience offers his venue, The Wheelhouse, to the band to play a secret late night show. Once I procure earplugs, and the band switches venues, it becomes the most rock and roll set I’ve seen in Western Mass in a while.

Despite language that might smell pretentious to some — Jaume I is a “crowdfunded, noncommercial, multi-curatorial popup micro-space for the furthering of visual, sound, performing arts and film on the fringes of experimentation” — Robidoux’s intention isn’t to cast anyone out, but rather to use Jaume I’s platform as a doorway to include people. He hopes that Jaume I will “step up the DIY game in Western Mass” and create less of “a separation between audience and performer.”

“I don’t want it to be like an exclusive club,” Robidoux says. “That’s why I wanted to have a storefront … I want every audience member to feel like they could curate a show if they want to.”

Robidoux rightly notes that it will be a commercial challenge to sustain the effort. He suggests that creating “a scene” — a broader community around Jaume I — will be the best way to realize his goal. He wasn’t fond of his experiences above ground, so to speak. He says that when he booked for a club, he found it “too number-crunchy, even though no one was making any money.” When he toured in a band that played the club circuit, it felt “detached.”

“I understand this isn’t a way to run a business, but I’m not a businessman,” Robidoux says. “Even if it only lasts for a few months, we did it on our own terms.”