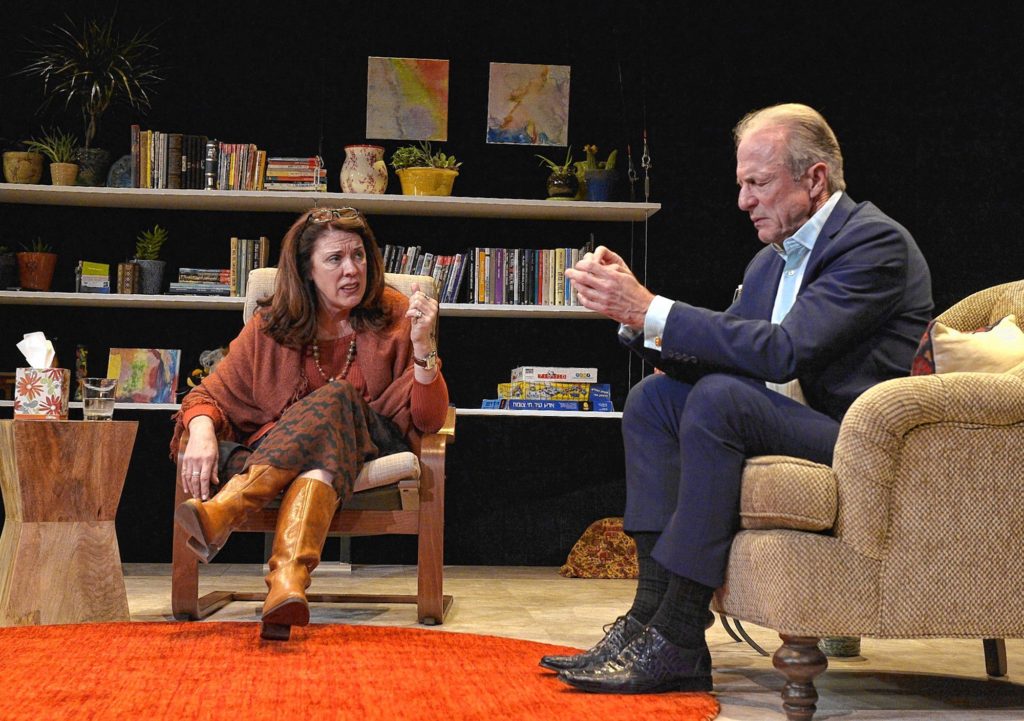 From the outset, though, theaters in the Berkshires have broken that mold. The original Berkshire Playhouse (now part of the Berkshire Theatre Group), which began performances in 1928 in Stockbridge, and the Williamstown Theatre Festival, founded in 1954, had higher ambitions, presenting weightier fare with professional casts. They’ve since been joined by Shakespeare & Company (1978) in Lenox and Barrington Stage Company (1995), now in Pittsfield.

Over the years, all four theaters have added “second stages,” where smaller-scale, often unfamiliar and, increasingly, brand-new works are showcased for more adventurous audiences. I often find these more intimate offerings the most compelling — especially when they offer the chance to see fledgling works take wing.

The Williamstown Theatre Festival season consists of three world premieres and one stateside debut of an Irish drama. That one is And No More Shall We Part, by Tom Holloway, a two-hander with Jane Kaczmarek and the protean English actor Alfred Molina, about an aging couple facing the inevitability of death and a choice as to its time and means. Martyna Majok’s Cost of Living, directed by the audacious Jo Bonney, finds four disparate lives intersecting in the wake of a devastating accident.

In The Chinese Room, a “sci-fi comedy thriller” from another Irishman, Michael West, a brilliant AI researcher designs a “humandroid” to preserve his wife’s failing memory. The musical Poster Boy looks at privacy and community in the digital age, as an online chatroom processes the death of a gay man, driven to suicide by cyber-bullying.

In July, the Berkshire Theatre Group premieres The Stone Witch in the intimate Unicorn Theatre on its Stockbridge campus. Shem Bitterman’s play, starring Judd Hirsch, pits youth against age and ambition against despair, as an aspiring author is tasked with helping his professional idol to finish his final manuscript.

Also at the Unicorn are Constellations, starring Kate Baldwin and Graham Rowat (returning to BTG after last summer’s Bells Are Ringing) as a high-powered physicist and a humble beekeeper caught in a recursive series of first meetings, and Fiorello!, the classic musical about an up-to-date topic: political corruption.

Three comedies on the Barrington Stage Company’s St. Germain Stage feature women dealing ingeniously with daunting obstacles: David Lindsay-Abaire’s Kimberly Akimbo, starring Debra Jo Rupp, about a teenager with a rare medical condition that makes her look middle-aged; Peerless, by Jiehae Park, about tenacious Asian-American sisters who (wait! what??) don’t get into the college of their choice; and Broadway Bounty Hunter, a new musical with an ’80s funk score, starring Annie Golden (Orange is the New Black) as an actress named Annie Golden who finds herself at a career crossroads.

This season at Shakespeare & Company, the Elayne P. Bernstein Theatre offers some present-day takes on Shakespearean plays and themes. Lauren Gunderson’s all-female The Taming, part of her Shakespeare Cycle of satirical comedies, reimagines the Bard’s famous “shrew” as an ambitious beauty-pageant contestant with an eye on political power.

Then two scorching dramas look at the physical and psychological wounds carried by war’s survivors. In Ugly Lies the Bone, by Lindsey Ferrentino, a soldier returning from Afghanistan struggles to rebuild her life along with her shattered body. And in Cry “Havoc!”, back in Lenox after a sensational run last summer, Stephan Wolfert recalls his own military experience through the lens of Shakespeare’s reflections on war.

Three regional debuts and a world premiere feature in Chester Theatre Company’s season. Oh God, from the Boston-based Israeli Stage, finds the Almighty in a therapist’s office because he’s so depressed about the state of the world he wants to end it all — not suicide, mind you, but Earthicide. That’s followed by Sister Play, a family-reunion comedy-drama by John Kovenbach with an insoluble mystery at its heart, and Katori Hall’s The Mountaintop, imagining Martin Luther King Jr.’s last night on Earth.

My number-one most-awaited show of the year is Chester’s season opener, My Jane, written by the company’s new artistic director, Daniel Elihu Kramer. The hit of the company’s 2011 season was pride@prejudice, Kramer’s cybernetic twist on Jane Austen’s masterpiece, which I called “at once hilariously cheeky and impressively faithful.” Now he takes on Charlotte Brontë’s Jane Eyre in what looks to be another metaliterary romp.

There’s lots to look forward to on the region’s mainstages as well, and I’ll be there, too. But you’re more likely to find me in one of those smaller venues, sharing this summer’s intimate Berkshire moments.