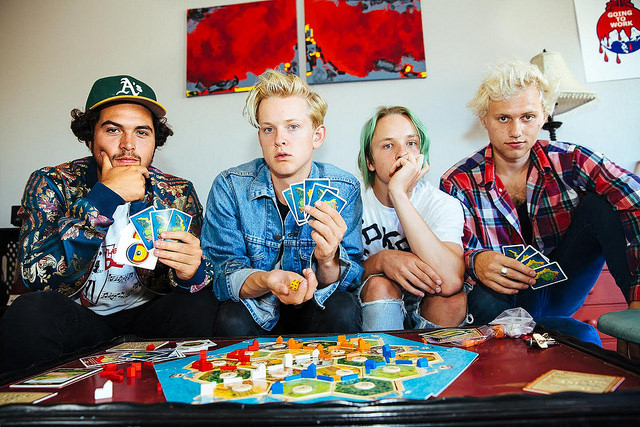 What’s in a name? The members of SWMRS are barely in their 20s and can already claim quite a lot. Reportedly inspired by watching Jack Black and his homage to headbanging — the film School of Rock — together in elementary school, the band first emerged on the West Coast scene as The Raining Souls. Shortly after, the took a brief turn as The Clocks before settling on Emily’s Army (in honor of band members/brothers Max and Cole Becker’s sister Emily, who has cystic fibrosis). Early this year, the band released their third full length, Drive North, on Uncool Records and, wouldn’t you know it, unveiled yet another change — the present SWMRS — in the process.

For all of this moniker maneuvering, however, perhaps the biggest claim to fame is the last name of its drummer, Joey Armstrong. Joey’s dad, Billie Joe, famously fronts the reigning clown princes of punk, Green Day, and even produced the band’s first two studio efforts.

“I think they have the potential to be ginormous,” declares fellow California kid and FIDLAR frontman Zac Carper. “They do whatever the fuck they want, and I want to see more of that in bands.”

To see SWMRS in person yourself, head out to Noho’s Iron Horse this Tuesday, June 28. Tix are $12 in advance, $14 night of show and available at iheg.com. Doors open at 7 p.m. Vermont indie-rockers The Snaz get the opening nod.