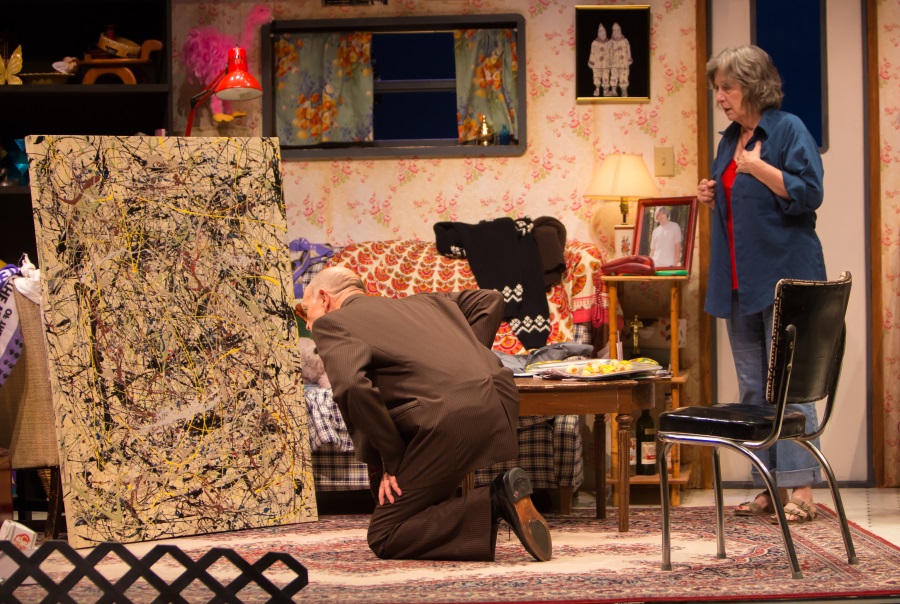 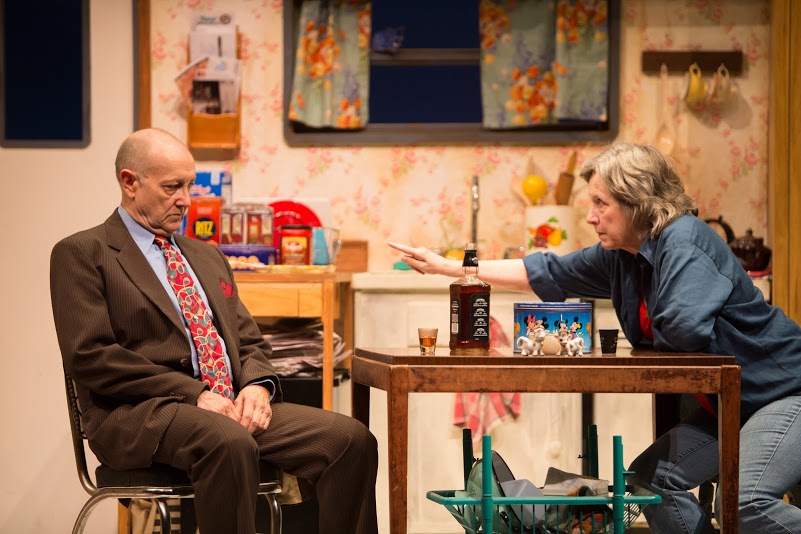 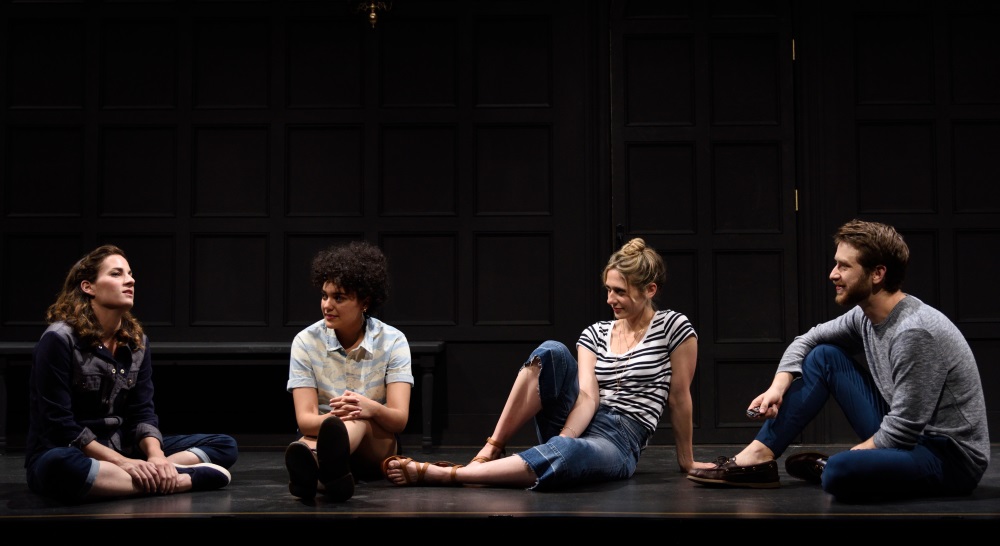 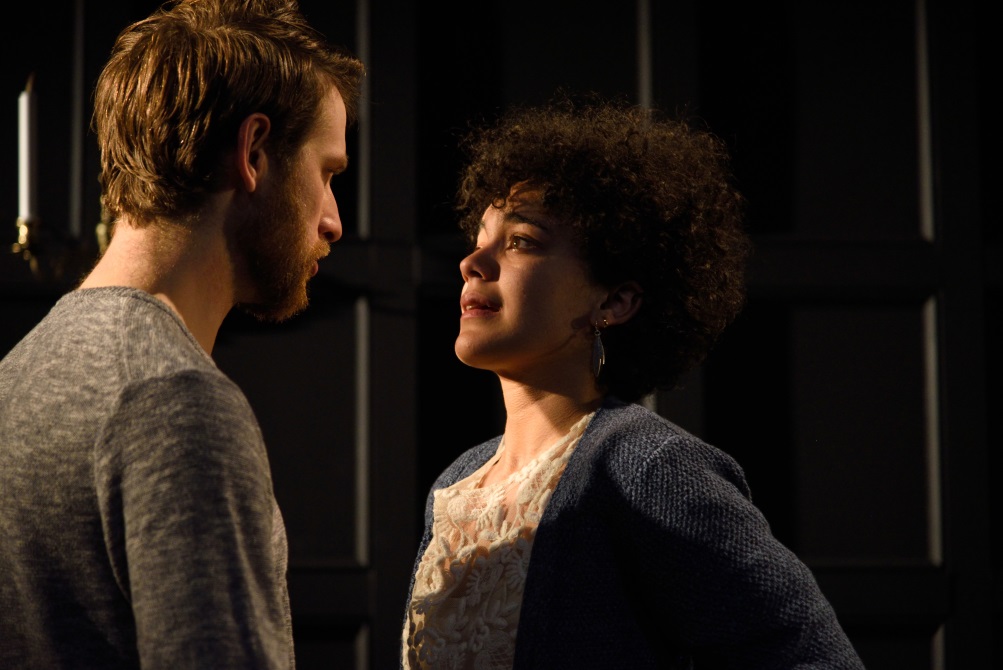 Two brief plays currently running in the area look at the power and value of art through quite different lenses, but ask similar questions: How does a work of art “speak to us” as individuals? How does its character affect our perception of it? How does its very meaning change with our own investment in it?

Investment, of the monetary kind, is uppermost in the mind of Maude Gutman in Bakersfield Mist, playing through this weekend at New Century Theater. In the closet of her mobile home she’s got a large abstract canvas, a mass of random lines and swirls that she bought for $3 at a tag sale as a joke, only to be told by the local art teacher that it might be an original Jackson Pollock. She thinks it’s “a piece of shit” – the exact epithet that’s applied to the pricey pure-white painting at the center of Yasmina Reza’s Art. 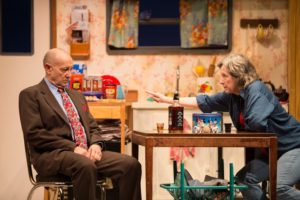 But after losing her job and making a half-hearted suicide attempt, she’s at the end of her rope, financially and emotionally, living on bourbon and resentment. She needs something to hope for, to believe in, and this suddenly magical object represents a lifeline, and a gold-plated one at that.

To turn this dross into gold she needs an alchemist – in this case, Lionel Percy, a world-famous expert whose opinion on a painting’s authenticity is unchallenged in the art world. Arriving at the Sagebrush Trailer Park in a chauffeured limo with a briefcase full of certification documents and an inflated sense of himself, he takes one look – alright, three looks – at the canvas and declares it a fake.

But that only ignites a twisting argument between the arrogant urban sophisticate (or, as Maude calls him at one point, “snooty son of a bitch”) and the headstrong, hardboiled ex-bartender – a debate, really, over value and values, class and culture, and okay, art and life. Suzu Sakai’s trailer-home set, lit by Amber Tanudjaja, gives the proceedings a fittingly chaotic backdrop.

Stephen Sachs’ brief two-hander (the title is a play on Pollock’s famous “Lavender Mist”) makes this clash of wills work by giving us a pair of equally obstinate characters, one of whom we instinctively despise while rooting with a certain alarm at the other’s desperate and possibly self-defeating determination. 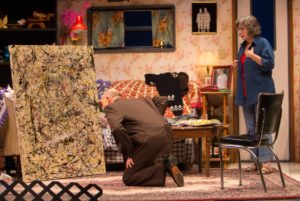 It’s fun to see Richard McElvain’s twitchy, fastidious Lionel physically recoiling at having to sit on Maude’s messy sofa, giving his dismissive opinion of the painting in a languid patrician drawl, and stretching his neck in order to look even farther down his nose at her.

In last week’s performance, Ellen Barry was marvelous as Maude, a foul-mouthed old broad whose unquenchable spirit is inspiring, amusing and sometimes exasperating. I say “was” because she suffered an accident early this week and had to leave the show. Her emergency replacement is New Century’s Cate Damon. The last time something like this happened – in the company’s 2010 production of Noises Off – the stand-in was more than up to the challenge, and I imagine that here, too, the show is not only going on, but going on unquenchably.

I’ve never read Jane Eyre. I tried once and couldn’t get past poor little Jane’s miserable downtrodden childhood. My acquaintance with the story comes from a couple of the many movie versions, as well as the Royal National Theatre’s recent story-theater setting, performed by a swirling ensemble on a skeletal set.

And there was also The Eyre Affair, the first of Jasper Fforde’s whimsical novels about Thursday Next. She’s an undercover “literary detective” in an alternate but veddy English universe where the characters in fiction live in a parallel Book World, leaping into action when people pick up the book and read. Thursday’s job is to find and fix leaks between the two worlds, revolts by the Book World denizens, and anomalies in literary plots. In that one, she finds Jane Eyre with an unsatisfying downbeat ending and engineers a happy one.

Daniel Elihu Kramer’s My Jane, completing its world-premiere run at Chester Theatre Company this weekend, is inspired by a similar metaliterary invention. Like his previous pride@prejudice, a cyber-take on the Jane Austen classic, this one approaches the book from within and without – a tight, clear dramatization of the story framed by reactions and comments from its readers. 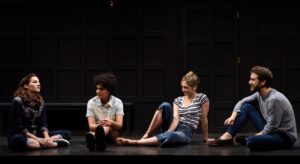 Charlotte Brontë’s spirited, plain-spoken and outspoken heroine has moved and inspired generations of avid young readers, most of them girls. My Jane begins with an Interviewer asking three women to recall their first experience of Jane Eyre. Their reminiscences merge into the story itself as they take on the book’s characters, adding a skirt here, a shawl there, to their casual modern-day clothes as they enact the plot.

They relate to the audience, too, addressing us as “Reader,” as Brontë does, sharing the experience as we travel together through the book. Knud Adams’ fluid staging is aided by Oona Curley’s set and lights – black wood paneling backing a plain bench and a couple of chairs, bright white lighting in the interview segments fading to candlelight and shadows in moody Thornfield Hall.

Alex Hanna steps in and out of the Narrator role, becoming the brooding Mr. Rochester, Jane’s employer and secret hearthrob. Camila Canó-Flavia is Jane, personifying the show’s invitation to a two-tiered suspension of disbelief: while much is made of Jane’s utter plainness, this actress is unarguably beautiful. 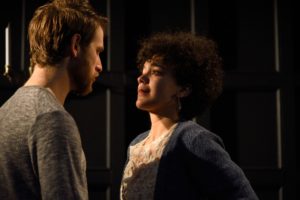 The versatile Claire Siebers takes on the other main roles – starchily erect as the motherly housekeeper, stoop-shouldered as the untrustworthy servant, flighty and flirty as Rochester’s socialite fiancée, icily menacing as his ominous nemesis. Laura Ramadei speaks the novel’s first-person narration and plays several supporting parts, including the book’s most chilling character, Rochester’s “mad” wife locked in the attic.

“Can we talk about Bertha?” asks the Interviewer at one point. For all three women, she’s not simply the deranged spouse who threatens Jane and Rochester’s happiness, but a problematic character for whom they feel a certain sympathy.

“To keep a human being locked up, mentally ill or not, is brutal,” says one. Another, putting herself in the woman’s place, adds, “I’m totally crazy in this attic, are you kidding me? Hell, yeah, I’d want to set the house on fire!”

Just as the scenes from the book are verbatim extracts of Brontë’s text, the interview sections are drawn from conversations Kramer had with numerous women for whom Jane Eyre marked a rite of passage, a turning point in their understanding of themselves, the world and literature itself. The two paths converge in a theatrical prism – a keenly observed, hugely entertaining adventure in the Book World.