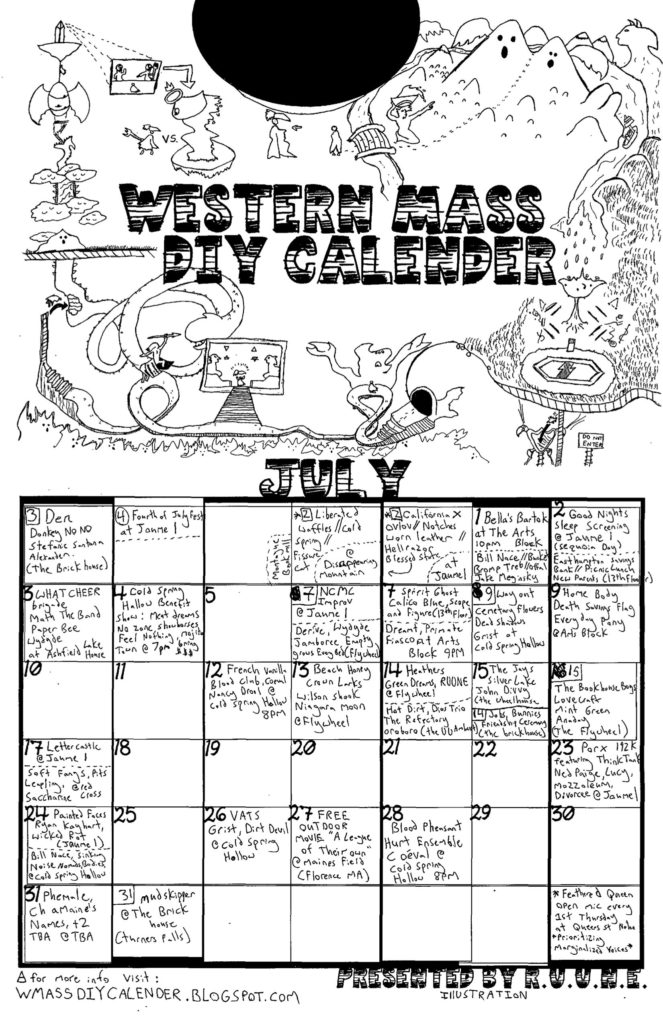 Amherst punk musician Will Killingsworth and Belchertown visual artist, musician, and show-booker Miranda Wiley have noticed a disconnect between subsets of the DIY music scene in Western Mass.

Killingsworth – who plays in Longings, Demonbrother, and No Faith – created a blog in 2013 after feeling like “I was forgetting about shows that I meant to go to, and after running into friends … who mentioned they didn’t even know about a show until after it happened.” Wiley tells me that “people at one punk house didn’t know about a show at another down the street.”

While visiting an anarchist library in Santa Cruz, CA called SubRosa, Wiley noticed it had a great DIY calendar. She filed it away in the back of her head, thinking that Western Mass lacked one like it. It wasn’t until January of this year that she teamed up with Killingsworth to create a physical calendar, which features a local visual artist each month. Wiley and Killingsworth collaborate on acquiring the show information. So far, artists have included Wiley, Robin Mackenzie, Morgie Macconnel, Adria Kelly, and Noel’le Longhaul, with artists currently booked through October.

The calendars have mostly been black and white, printed on copy paper, with bands and venues scrawled into different dates. The calendar hangs at The Brick House Community Center in Montague, at Flywheel in Easthampton, and at Birdhouse Music, Lucky’s Tattoo, and The Roost in Northampton, with potentially more to come. This month’s calendar features the art of show-booker, musician, and visual artist Greg McKillop, who goes by RUUNE on stage.

“In the current world of Facebook events and invites,” Killingsworth says, “it seems easy to think that there couldn’t be any shows that you’re unaware of, and that everyone else must be being blasted by the same ones that you are.” But in an age where algorithms play God, and endless scrolling yields little information, that simply isn’t the case. Even when online platforms have promised to make it easy for artists, bookers, and promoters to get the word out about shows, music fans still find themselves in the dark.

“People are also less likely to flyer for events and just keep all of the info online,” Killingsworth adds, “which means that shows tend to be more insular, because the awareness of the event only reaches so far within that person’s friend list.”

Keeping shows limited to one’s friend list doesn’t allow for cross-pollination between groups. It doesn’t make info available to new people in the area, or those traveling through. And it could potentially stifle one’s ability to explore shows outside familiar friend groups. In a community with rich artistic diversity, it is a shame to remain cliquey.

More than ever, it is easy for news to get lost or overlooked online. In her 2014 book The People’s Platform, about culture in the digital age, the leftist Internet and technology critic Astra Taylor writes that “it may seem counterintuitive at a time of information overload, viral media, aggregation, and instant commenting to worry about our cultural supply. But we are at risk of starving in the midst of plenty.”

For Taylor, the relationship between underground/DIY art and for-profit social media is paradoxical at best, and toxic at worst. In the best cases, this contradiction inspires the creation of alternatives to how we sell data to advertisers – through clicks, likes, and friends – while the government watches.

The WeMa DIY calendar is one of these alternatives – not as an intentional rejection of social media, but as a practical solution to its pitfalls. Wiley and Killingsworth have created a platform to bring the community together, connect disparate parts of the scene, and — just maybe — create an alternative to online capitalism. Because, of course, staying independent from corporate influence is a default feature of the DIY life.