4,500 Square Feet of Eden Blooms in Holyoke: A mega farm on a mini lot 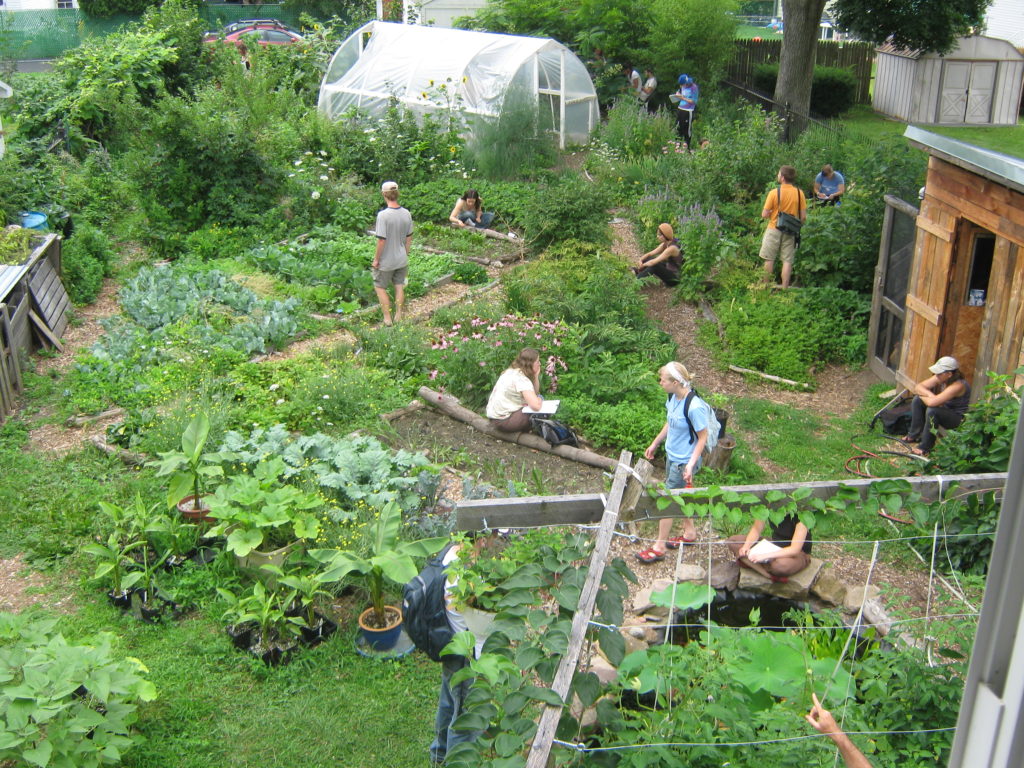 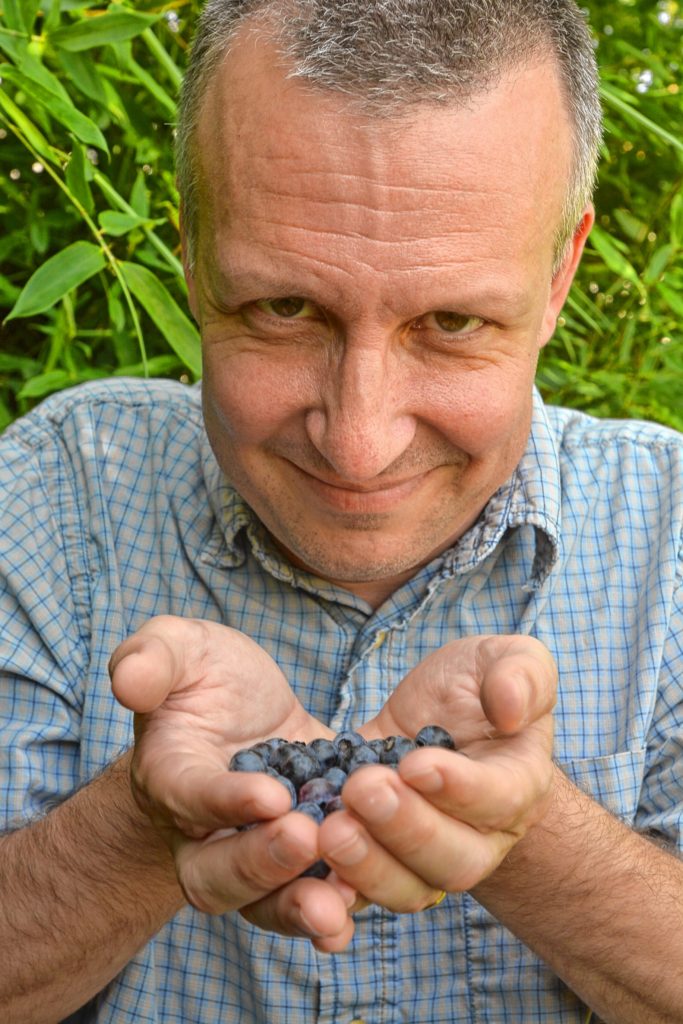 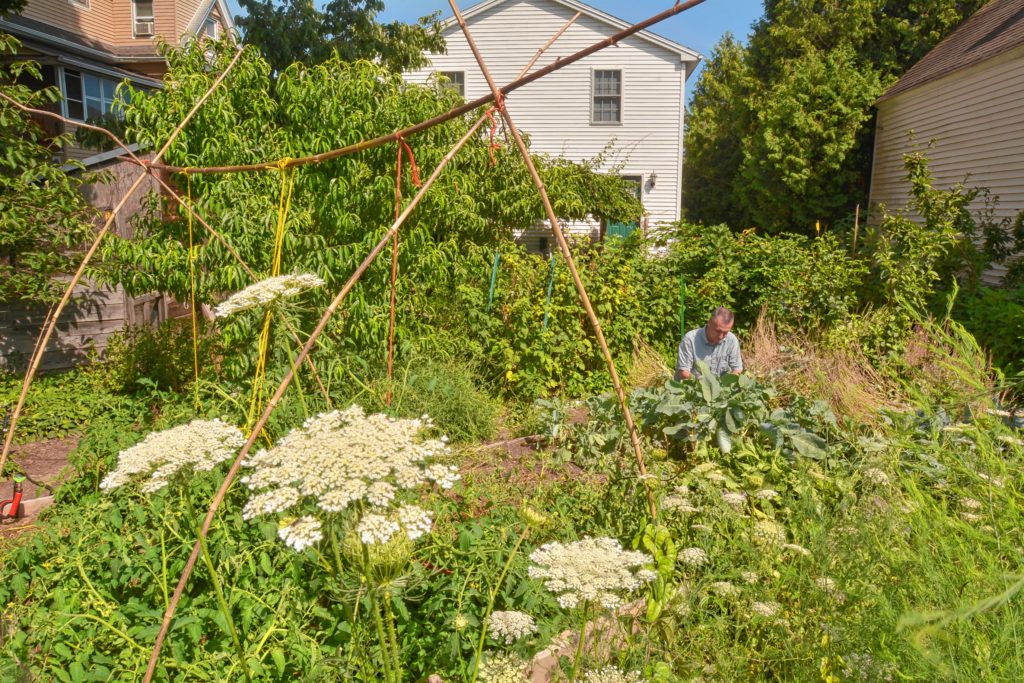 Eric Toensmeier in his garden. Photo by Jerrey Roberts 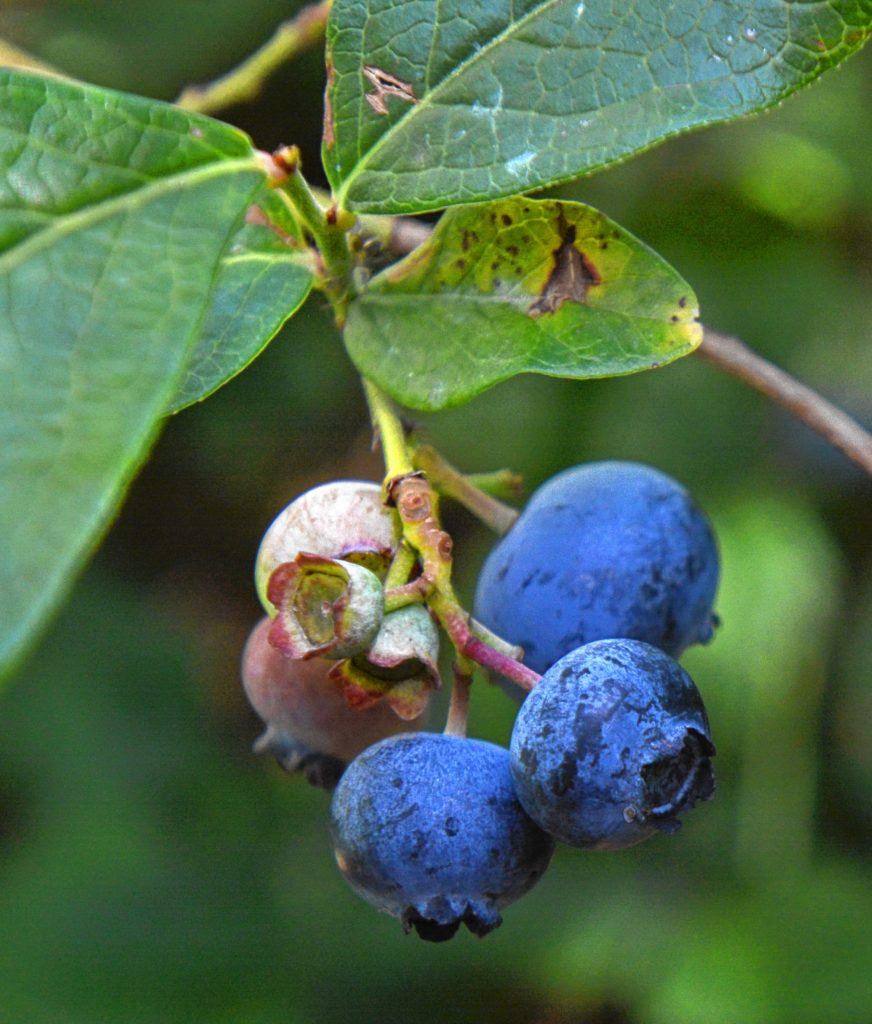 In the middle of an ordinary residential neighborhood in Holyoke lies a hidden Garden of Eden, where pollinating insects buzz from flower to flower and nearly everything is edible. Despite appearances, this place was no act of divine creation. The garden was born of the hard work and ingenuity of Eric Toensmeier and Jonathan Bates, two self-proclaimed plant geeks with a reverence for the complex web of systems that make up a functioning ecosystem and a desire to spread the gospel of permaculture.

It’s hard to believe that when Toensmeier and Bates moved into opposite sides of the duplex with their families in 2004, the lot— only a tenth of an acre in size— was barren, sustaining nothing more than a patchy lawn of crabgrass. 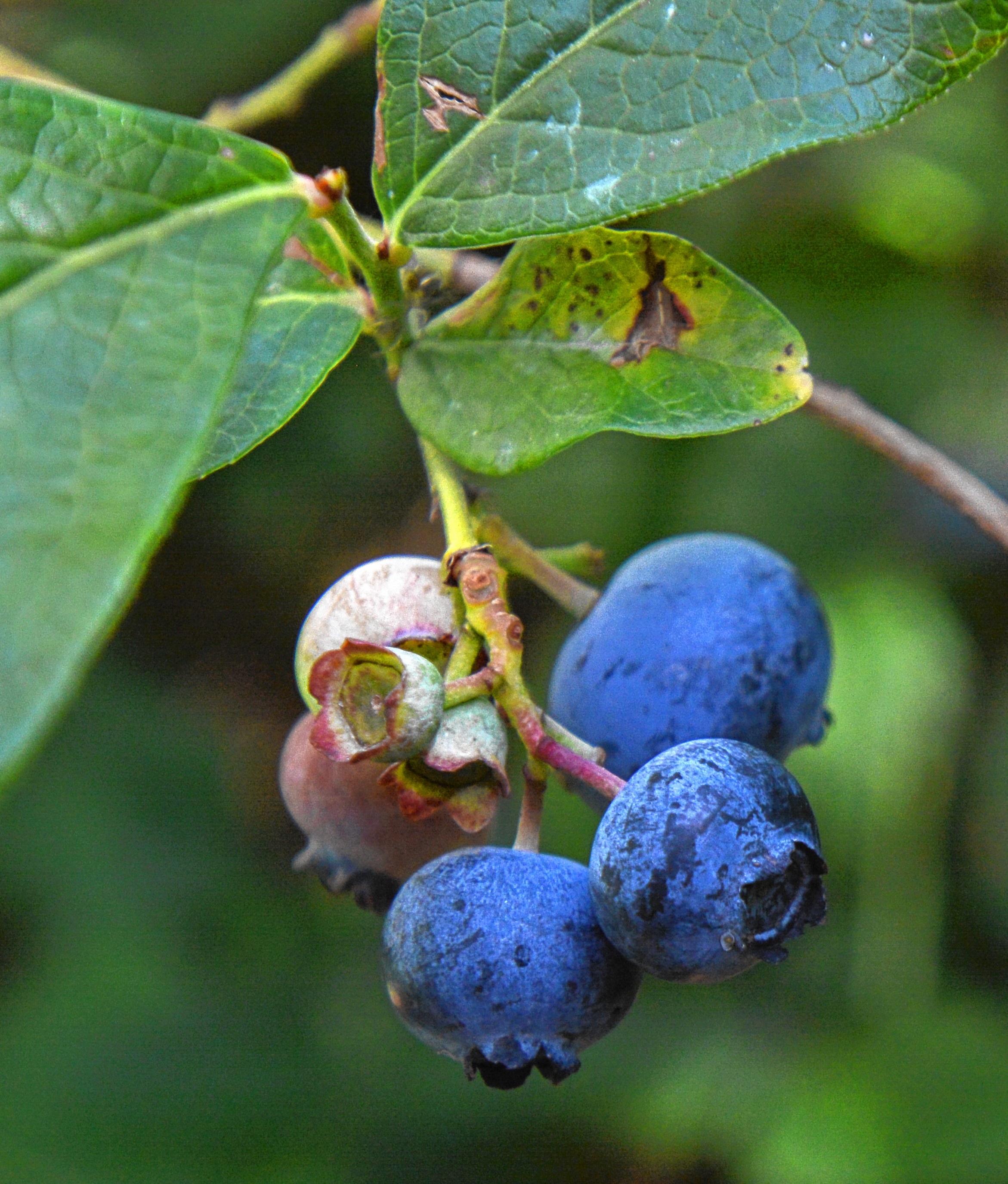 “It was bare clay fill with concrete and bricks and stuff,” Toensmeier says. “It was terrible when we got here. It was about two percent organic matter when we arrived and the last time we tested it, it was at about nine percent. That’s really good.”

Now though, their efforts are bearing fruit — literally. In just this small amount of space, they’re able to produce enough food to meet between ten and 20 percent of the dietary needs of four adults and two young children.

“This time of year it’s basically all of our fruit except for bananas and avocados, and all of our greens all year round,” Toensmeier says. “The trick is that it’s not the diet we would have if we didn’t do this, because half of these things you can’t even buy in the store at all. They’re not available.”

Given the lot’s size, producing this much food is no small feat, but the whole point according to Toensmeier and Bates is to show that it’s possible, and to provide a testbed for permaculture concepts. In addition to a few staples like kale and collard greens, they’re growing non-traditional crops like clove currants, paw paws, and edible-leaf varieties of mulberry and linden trees. The garden contains over 300 varieties of perennial plants.

“Half or more of the reason that we moved to that location was to start the garden,” Bates says. “The garden has been really in the works since more like 2002, but it wasn’t until we found that particular lot that we drew up the design over a year or so and installed it over three years. We’re still installing it. It never stops changing.”

Toensmeier and Bates moved from Southampton— a more traditional agrarian community — to Holyoke for the project. The intention from the outset was to create the garden as an experiment, a demonstration of the viability of urban farming projects. Little by little, they’ve turned it into the fertile oasis it is today, and christened it with an appropriate new name: Paradise Lot. The two co-authored a book by the same name about the experience.

“Almost everything you see here has a lot of thought, conversation, research, and observation behind it, and what we’re trying to do is get it to the point where other people don’t have to do that,” Toensmeier says. “If we were starting to do this again, we could do it so much better and so much faster and for other people that are starting to do this now … people could cut the time to getting to this stage almost in half.” 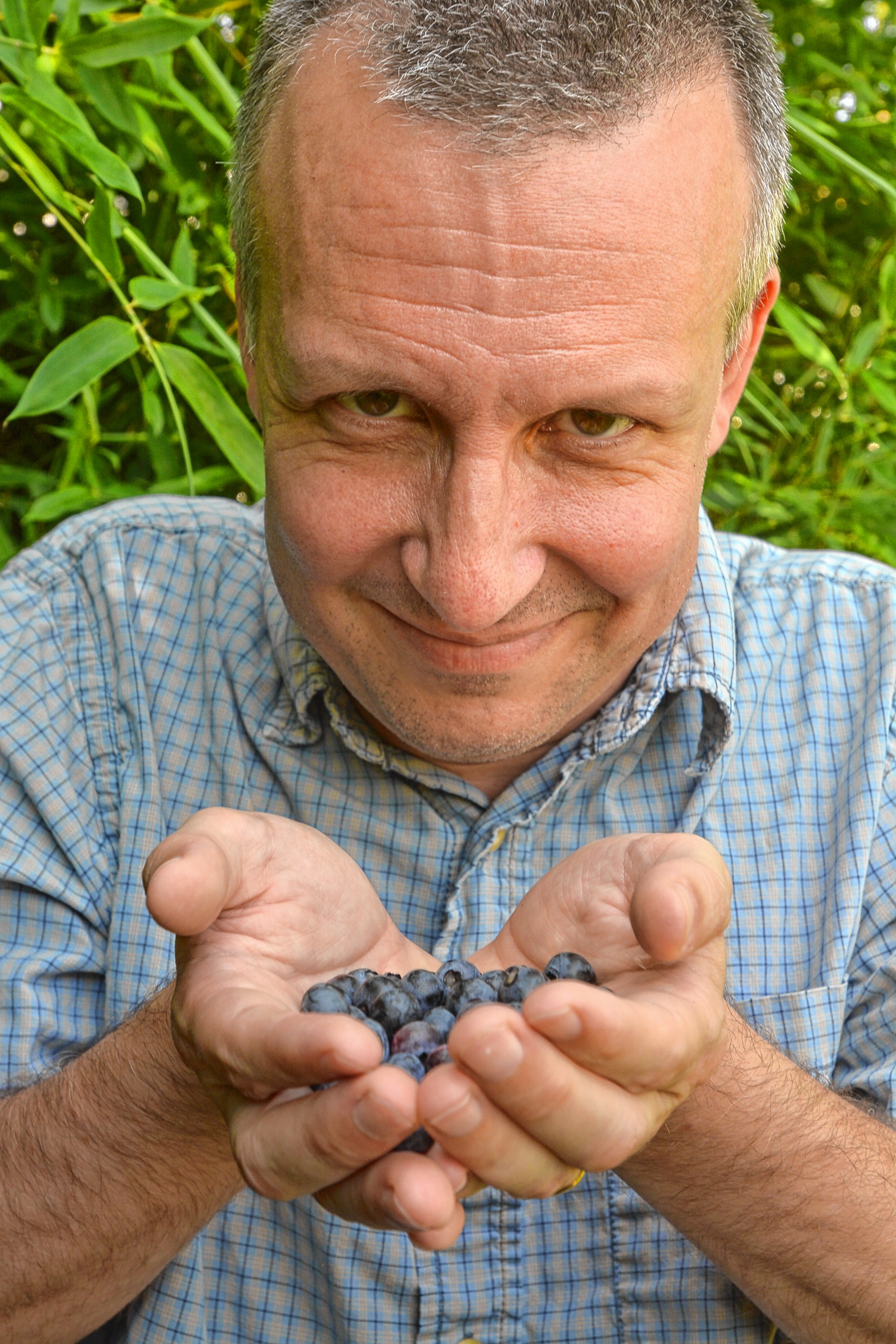 Toensmeier has published several books on the subject too, and the pair even help run an internet wiki, called the Apios Institute, devoted to sharing information on permaculture gardening.

“This area is a protected microclimate,” Toensmeier says, gesturing to a garden bed between his front porch and the driveway. “The house blocks the wind and the asphalt radiates a lot of heat, and the house radiates some heat in the winter.”

The broad leaves of a banana tree spring from the dense patch of green. Vibrant pink and yellow gladiola flowers sway gently in the breeze in a thin strip that divides the driveway.

“They’re not supposed to be able to overwinter here,” he says. “But they don’t know that.”

“Each area of the garden has its own conditions and we have our own goals for it. This area over here,” he says, pointing out another patch on the opposite side of the driveway. “In the winter it’s piled really high with snow, because there’s a driveway on either side. Salty snow. Salt makes the soil alkaline, so it’s sort of snowy in the winter and dry in the summer. It turns out the plants that have done best there are from the Rocky Mountains where that’s basically the deal.”

Toensmeier pauses in the shade of large tree with strange green fruit the size of small potatoes. He kneels next to a rhubarb-like plant with enormous elephant ears for leaves. It’s fuki, he says, and it likes the wet shade the paw paw tree provides. He runs his fingers over a few nondescript little plants in a small garden patch. In just this couple of square meters, he’s growing ground bean, ramps, and toothwort, a type of wasabi. 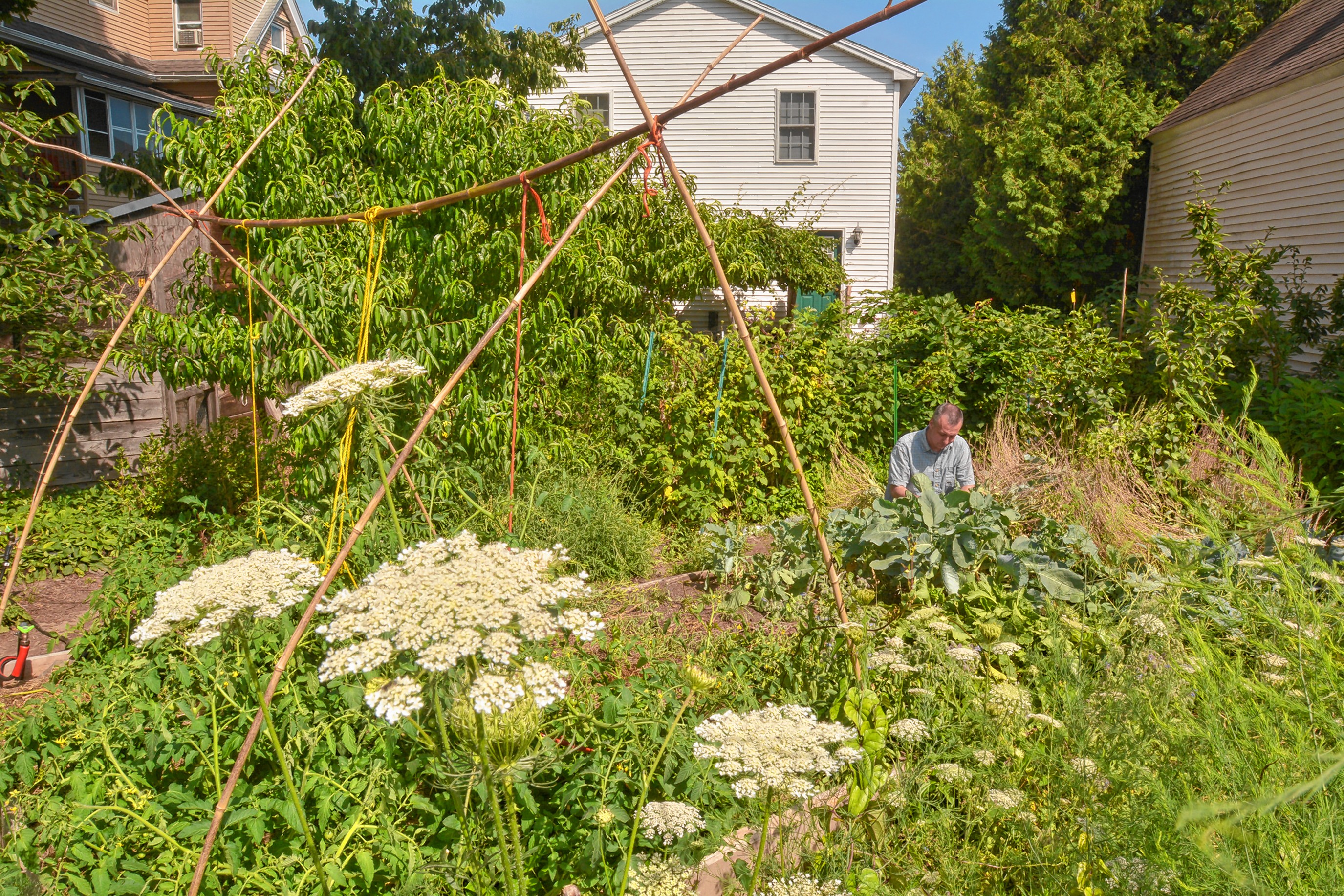 Eric Toensmeier in his garden. Photo by Jerrey Roberts

And biodiversity is key in the permaculture garden. He says that he always makes sure that something is in bloom, attracting as many native pollinators as possible. Many— like wasps— are predacious and dramatically cut back on insect pests.

At the center of the garden, though, is a point of pride for both men: a test bed that may contain the Valley’s first perennial kale variety.

“We’ve been experimenting with various things since the beginning,” Bates says. “But one thing that is very exciting is that if we have one more winter that those kales overwinter without flowering or dying, then we have a fully hardy perennial kale that we can propagate and give to everyone in the Valley … just plant it once and as long as the pests don’t get it, it’s there forever.”

Experimentation has been at the heart of the project from day one— and it’s earned them attention at the international level. Representatives from Noma— a Copenhagen restaurant which was voted the world’s best restaurant four times— recently toured the back yard to explore the idea of replicating it for the restaurant.

“One of goals going in,” Bates says, “was asking the question: can you design a garden to mimic the structure and function of a forest, but replace it with useful plants for humans— food, fodder, medicine, and all those things— can you do that successfully and make it work in the Northeast? We feel that we’ve answered the question, and the answer is: yes we can.”

One thing that hasn’t been a goal though, they say, is to get off the grid. The say they’re glad to be part of the community.

“We’re in the city,” Toensmeier says. “We’re not trying to be self-sufficient at all. That isn’t remotely our goal … Much of what we need is right here in town … You can reduce a lot of your negative impact by living in a city and having a very productive yard, and in fact, you can really turn a dead space into a living space again.”