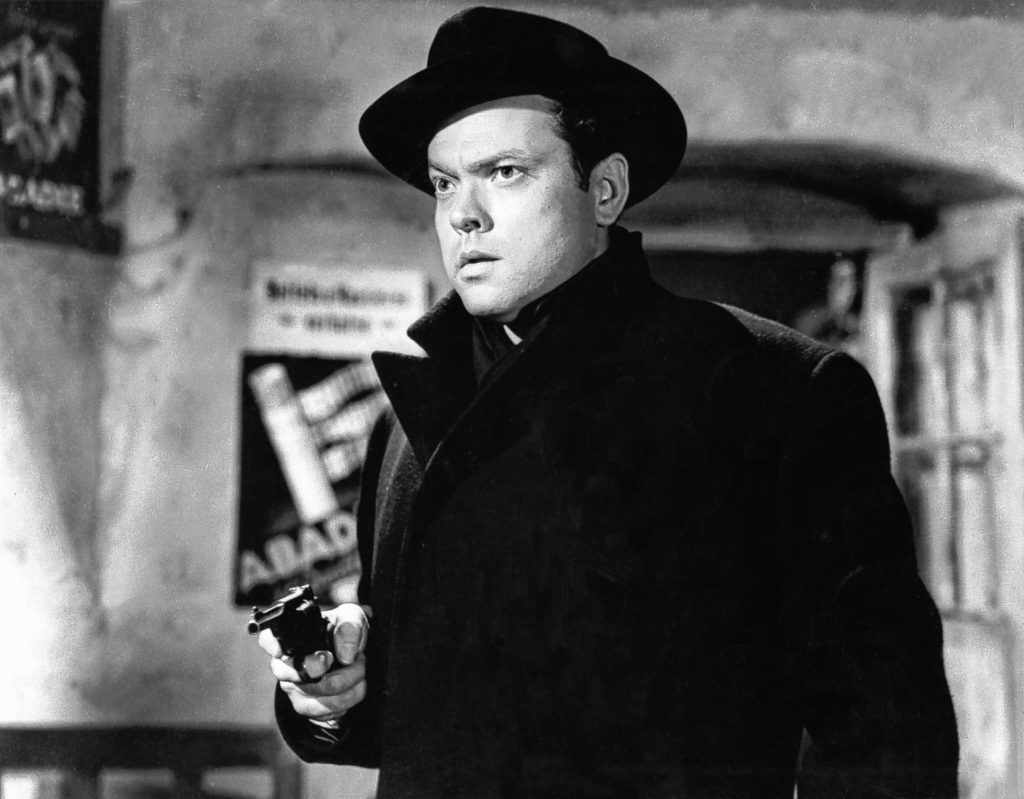 Quick, name this film: stylish, black and white, set overseas in or around the Second World War, but not about the ground fight in Europe.

If you guessed Casablanca, you’re in good company. Michael Curtiz’s 1942 romantic drama, pairing Bogart and Bergman against the backdrop of the looming Nazi threat to Casablanca, is a perennial at cinemas all around the country. It crops up at Bogart festivals and as a bit of an odd Valentine’s Day tradition, and it’s a damn fine film — but it’s not the only one to deal with the events on the periphery of the war. What’s more, it’s not even the best one to do it.

The film I’d rather see every time is The Third Man, screening this Sunday at 2 p.m. and Tuesday at 7 p.m. at Amherst Cinema as part of the theater’s Orson Welles 101, a retrospective of the writer/actor/director’s greatest hits on the anniversary of his 101st birthday. Director Carol Reed’s 1949 drama, set in a postwar Vienna still rebuilding after the devastation of the war years, stars Welles as Harry Lime, an opportunistic hustler who is pronounced dead soon after the film begins.

It is Lime’s childhood friend Holly Martins (Joseph Cotten) who receives the news; a pulp writer who comes to Vienna to take a job Lime had offered him, Martins arrives just in time to catch his friend’s funeral. Afterward, his friend’s way of life — racketeering and dealing in black market medicine when people are suffering the most — comes out. Martins, appalled, vows to clear his friend’s name and begins investigating his death. But in the Vienna of the day, little was what it seemed, and peeling away one layer of deception reveals little more than another, more rotten, layer beneath it.

All in all, it could have been a fairly standard story, even though it was written by novelist Graham Greene (Our Man in Havana, The Quiet American). What sets Reed’s film apart is the atmosphere he captures onscreen, thanks largely to cinematographer Robert Krasker. Influenced by both American film noir and the German Expressionist movement, Krasker’s lens work — rich, dark, and off-kilter — is both familiar and unique, the apotheosis of a style that we have grown used to seeing practiced by lesser masters. With its stark shadows and dramatic camera angles, Krasker’s stills look like pages from a great graphic novel, each image telling a story all its own.

The action is further helped along by the infectious score composed and performed by Anton Karas, who was unknown at the time. Using only a zither — a relatively rudimentary folk instrument of Eastern Europe — Karas (whom Reed stumbled across in a bar while filming) was able to create a musical accompaniment that uncannily captures the dark-circus atmosphere of the time and place. So effective, and so memorable, was the result that the theme music for the film spent 11 weeks atop the U.S. Billboard charts, leading to a new tradition of theme music as hit single — though few since have had the instant hummability of Karas’ famous theme.

Also this week: in Shelburne Falls on Friday and Saturday, Pothole Pictures is screening the wonderfully hyperkinetic 1998 film Run Lola Run. A German import from director Tom Tykwer, the highly stylized film presents three alternate versions of a story. Though the basic premise is the same throughout — young woman Lola has twenty minutes to find 100,000 Deutschmarks that her boyfriend has lost, and return them to the Berlin mobster to whom he owes the money — the film then presents a trio of different possible outcomes, showing how even the smallest decision can end up making a profound difference in a life. (Of course, we all go through this every day, just not on the level of Berlin-mobster-will-kill-your-boyfriend.) It’s a gimmick, but a good one, and done with such verve that the sheer adrenaline carries us along through to the end. A tour-de-force of cinematic tricks, it is also, in the end, a film — much like The Third Man — that transcends its most obvious hallmarks to become something lasting.