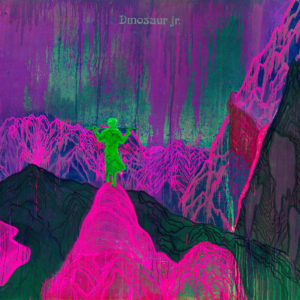 Dinosaur Jr.
Give A Glimpse Of What Yer Not
(Jagjaguwar)
Release date: 8/5/16

Break out the ear plugs. Western Massachusetts’ own alt-rock power trio, Dinosaur Jr., is back.

New album Give A Glimpse Of What Yer Not marks the fourth release by the band since the acclaimed 2005 reunion of the group’s original line-up – J Mascis (guitar, vocals), Lou Barlow (bass, vocals) and Murph (drums). In fact, this current incarnation of Dinosaur has now actually lasted longer and produced more records than it did in the ‘80s, when Mascis and company turned out such ear-crushing gems as You’re Living All Over Me and Bug. And while the new album bears less resemblance to those early classics than it does to the band’s more recent reunion work, that fact only aids the assertion that the group’s second life is no fluke, it’s a full-on resurgence.

Opening with the one-two punch of singles “Goin Down” and “Tiny,” Give A Glimpse Of What Yer Not hits the ground running.

“Are you with me?” Mascis sings on the album opener. “I got more to say.”

Though not normally cited for his loquaciousness, the guitarist lets his axe speak for him with catchy riffing and skittery solos filling up both tracks’ running times. It’s alternative rock with a pop sheen for the ‘90s nostalgia age, and the Murph and Barlow rhythm section keep up a relentless chug.

“Be A Part” slows the tempo with a repeated guitar figure ringing out between lines focusing on being “broken hearted.” But it’s the Barlow penned cut “Love Is…” that marks the first deviation from the band’s trademark crunch. Over acoustic guitar and some lurking fuzz, the Sebadoh founder feels right at home on a song that wears its ‘60s influence on its sleeve. It almost even sounds like another band is playing complete with Mascis’ ragged Neil Young-like solo conjuring a classic rock vibe.

The album’s second half features a return to a heavier sound. “I Walk For Miles” feels like a slow trudge with a bludgeoning grunge riff that stomps along as Mascis’ reach for a higher register accents the weary atmosphere of the track. At nearly six minutes in length, the number also pairs with the five-plus minute “Lost All Day” to hammer out an air of wistfulness that sees lyric subject matter looking backwards at past relationships and the things that went wrong.

“Knocked Around” follows suit. “I miss you all the time and I’m lonely,” Mascis laments on the first half of the number, sounding plaintive and wrung out. Then, strength gathered, the band soars into overdrive for the rest of the track with the furious strumming barely keeping up with the relentless drumming.

Finally, it’s left to Barlow to close out the album with his second contribution. “Left/ Right” again sounds like a song that could come from another band, only this time that band is Barlow’s other group Sebadoh. More acoustic instrumentation rears its head, but where “Love Is…” showed off a wily Mascis guitar solo, here his playing feels restrained, almost terse. There are still textures aplenty, but the idiosyncrasy of the moment leaves question marks on an otherwise strong track.

Overall, Give A Glimpse Of What Yer Not sees Dinosaur Jr. making subtle tweaks to a tried and true formula. If it ain’t broke don’t fix it. But the clock is ticking on referring to this phase of the band’s career as post-reunion. When you’ve already outlasted the era of your earliest rumblings and eclipsed a spell spent under a major label banner, those events soon start looking like bumps in the road of a significant career that just needed some time to grow into its current arc.