The Beerhunter: Get ‘Em Here — or Nowhere 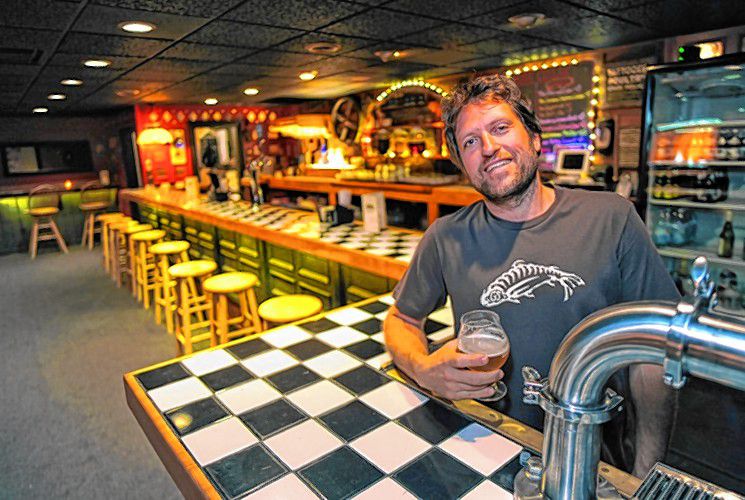 Wendell Rheinheimer, co-owner of the Root Cellar in Greenfield, with a special house beer by Stoneman Brewing. Photo: Paul Franz for the Recorder. 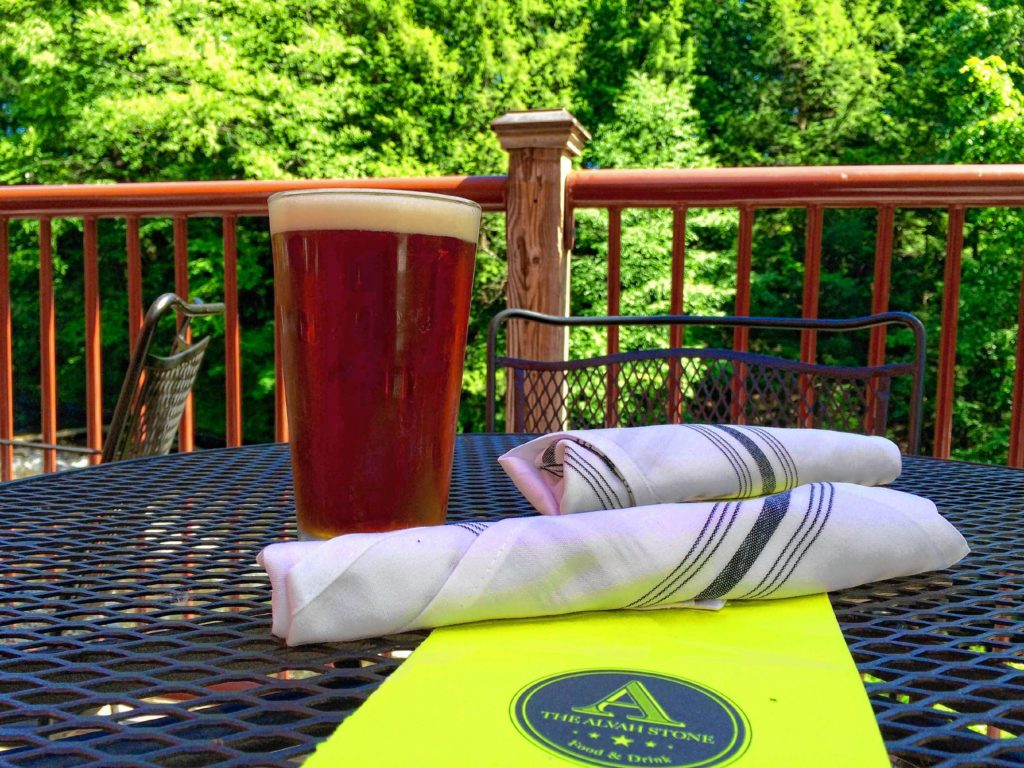 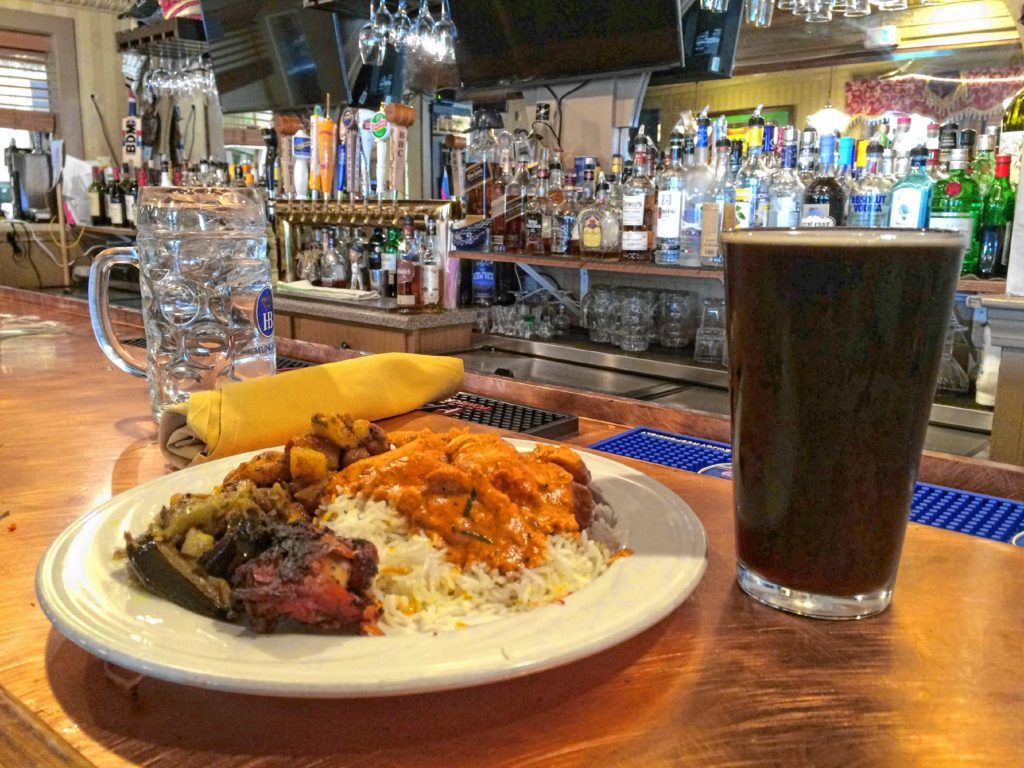 Pintu's Porter, made by BBC and served only at Pintu's Indian Restaurant in West Springfield. Hunter Styles photo.

Some people have trouble leaving their work at the office. As the Beerhunter, I’ve never really had to contend with that. In fact, if my editor turned around in her swivel chair and saw me taste-testing local craft beers at my desk all afternoon, the paper would probably assign me to a less bubbly beat.

So to a certain extent, I have to “work” off-hours, keeping my eyes wandering up and down the Valley for interesting goings-on in the craft beer world. Sometimes I know exactly how an article is going to emerge. But every now and then, a story sneaks up on me.

That happened recently at the Shelburne Falls Bowling Alley, an adorable old candlepin mecca tucked up on the hill behind Bridge Street. Tugging on my colorful bowling shoes, I saw a customer glide past holding a pint of beer from Lefty’s Brewing, based in Greenfield. I went to the bar to order one.

“Have you tried this?” asked the bartender. Ever the connoisseur, I nodded sagely, assuming I had. Then he poured me a Head Pin IPA, a special Lefty’s beer available only right here. My smug smile dissolved. So much for knowing my suds.

When I called Bill Goldfarb, the brewmaster at Lefty’s, to ask him about my discovery — which I found enjoyably crisp and clean, with a little citrus bite — he explained that he cooked it up because the bowling alley “had been cranking through the Doc’s Double Whammy IPA, and [co-owner Tam Hanna] had wanted a beer with a similar hop punch but a lower ABV, so we all sat down and came up with the Head Pin IPA.” Goldfarb added that Lefty’s also makes a special beer called the Alvah Stone Ale, for the Montague restaurant of the same name.

Site-specific beers like these come and go. Many are only available for a limited time. Breweries phase them out, or only make them at certain times a year. For example, the People’s Pint Brewery only makes Freshgrass IPA — the signature beer for the Freshgrass bluegrass festival at MASS MoCA — in late September, in small batches with wet hops picked just hours before brewing.

Wendell Rheinheimer, co-owner of The Root Cellar in Greenfield, has a different idea. When the bar and music venue opened its doors three weeks ago, visitors grabbed pints of Root Cellar Pale Ale. That new house beer is brewed by Rheinheimer’s childhood friend Justin Korby, who runs Stoneman Brewing in Colrain.

This ale is available at a few restaurants, but its raison d’etre is the Root Cellar, Korby told me. “I love aggressively hopped beers, but my challenge this time was to make a middle-of-the-road, American-style ale. Hoppy enough for people who like IPAs, but mellow enough for people who don’t.”

Stoneman uses a one-barrel system, which turns out roughly 30 barrels of beer at a time. So while some larger breweries think of collaborations as side projects, Korby — who has never done kegs before — sees Root Cellar Pale Ale as a large-batch endeavor. “You can do a lot with a small brewery, though,” he said. “It’s all about seeing what you can do, especially when you get other people on board.”

Feeling encouraged, I drove to Montague to sample the Lefty’s Alvah Stone Ale. I never need much of a push to head over to the dusty, riverside paradise that is the Montague Bookmill, one of my favorite spots in the Valley. I’m tempted to visit those shelves a few times a month — the chance to sample a secret beer variety was just the cherry on top of my semi-regular sojourn.

The restaurant is tucked into the lower floor of the old mill building. I chose a late-afternoon weekday, arriving just at the golden hour when the sun casts long, warm shadows across The Alvah Stone’s beautiful deck. With a pint of Alvah Stone Ale, I pulled a metal chair across the rough boards and stared serenely at the river. The smell of heat-soaked wood and the slightly briny breeze from the river had me in good spirits even before I take my first sip.

This is an unassuming ale — no bells and whistles here — but enjoyable for its smooth and malty taste. Although this amber ale doesn’t wow, it satisfies — especially in this setting, where the whole point is to be outside, spaced out, listening to the river, and setting the finicky aside.

Still, I was seeking a beer with a little more flair. After a few days, I found it in West Springfield, at Pintu’s Indian Restaurant. The eatery is easy to miss, located just off the North End Bridge rotary at Park Avenue, but it’s a local treasure. Similarly, the restaurant’s most unusual beer on draft is also its top seller for 15 years and counting: Pintu’s Porter. Made by Berkshire Brewing Company, this thick, dark beer is silky and slightly sweet, brewed with nutmeg and green and black cardamom. It’s a really tasty spiced beer, robust but easy to drink, and it complements many of the Indian dishes coming out of Pintu’s kitchen.

It’s a perfect example of how a site-specific beer can raise the profile of a brewery while adding something unique to a bar’s menu. Now that my beer antennae are better tuned to special collaborations like this, I won’t be so quick to wink at bartenders, assuming I’ve tried ’em all.