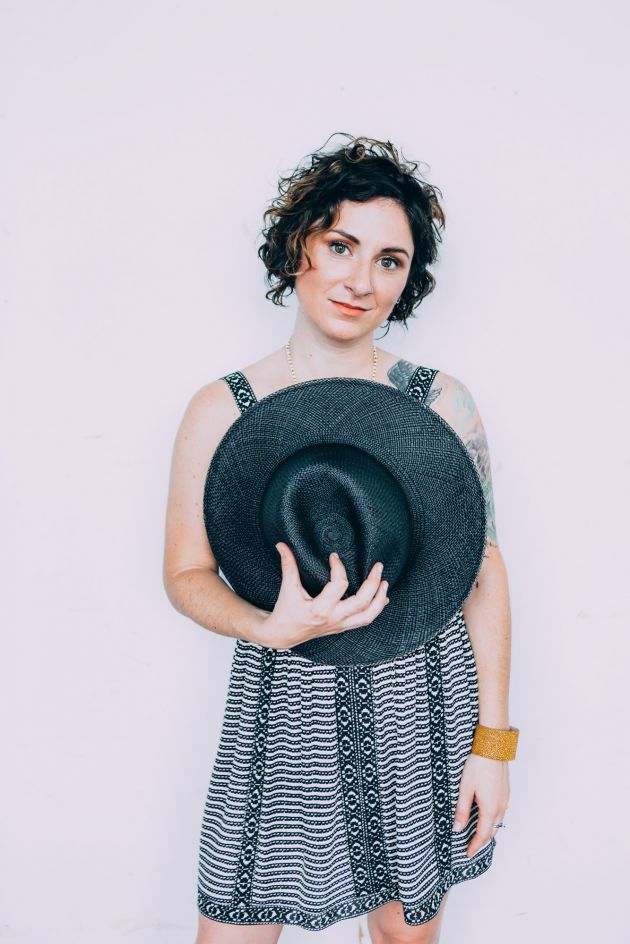 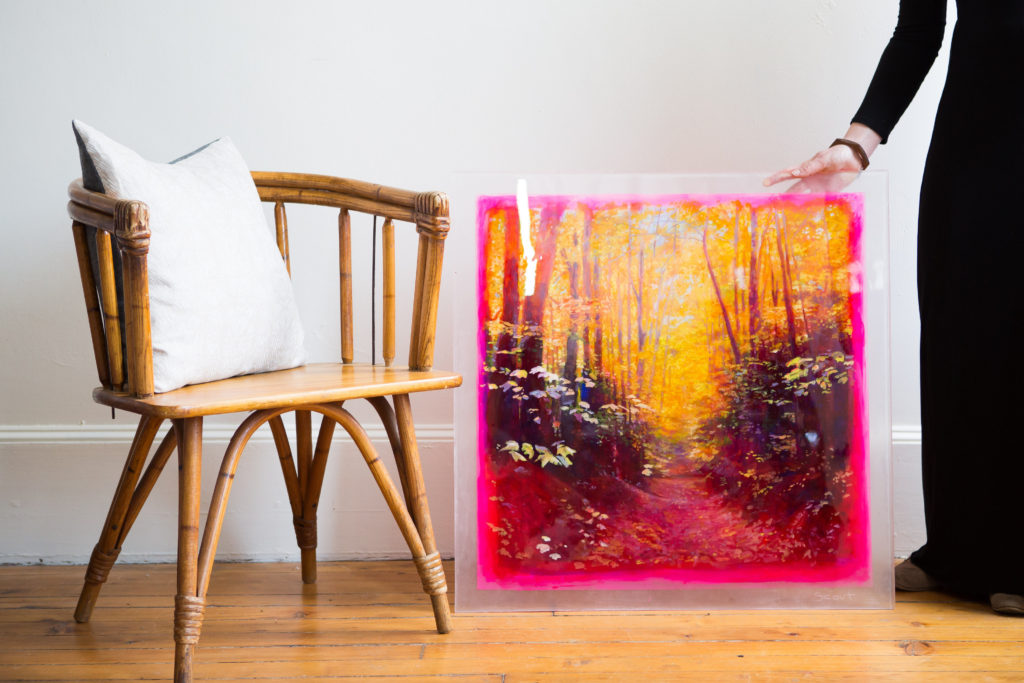 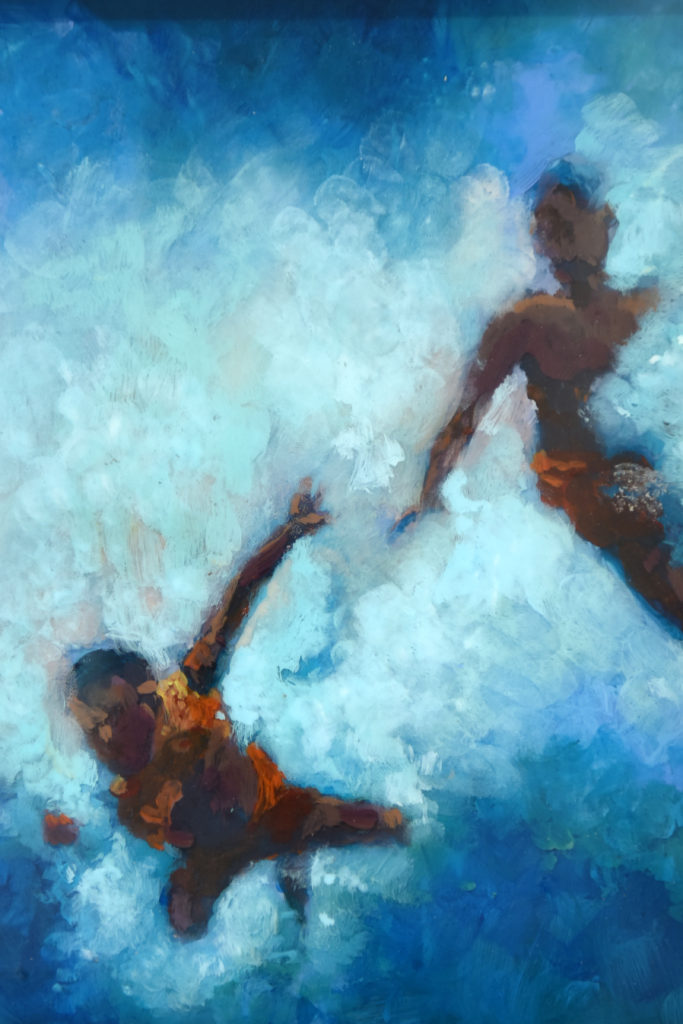 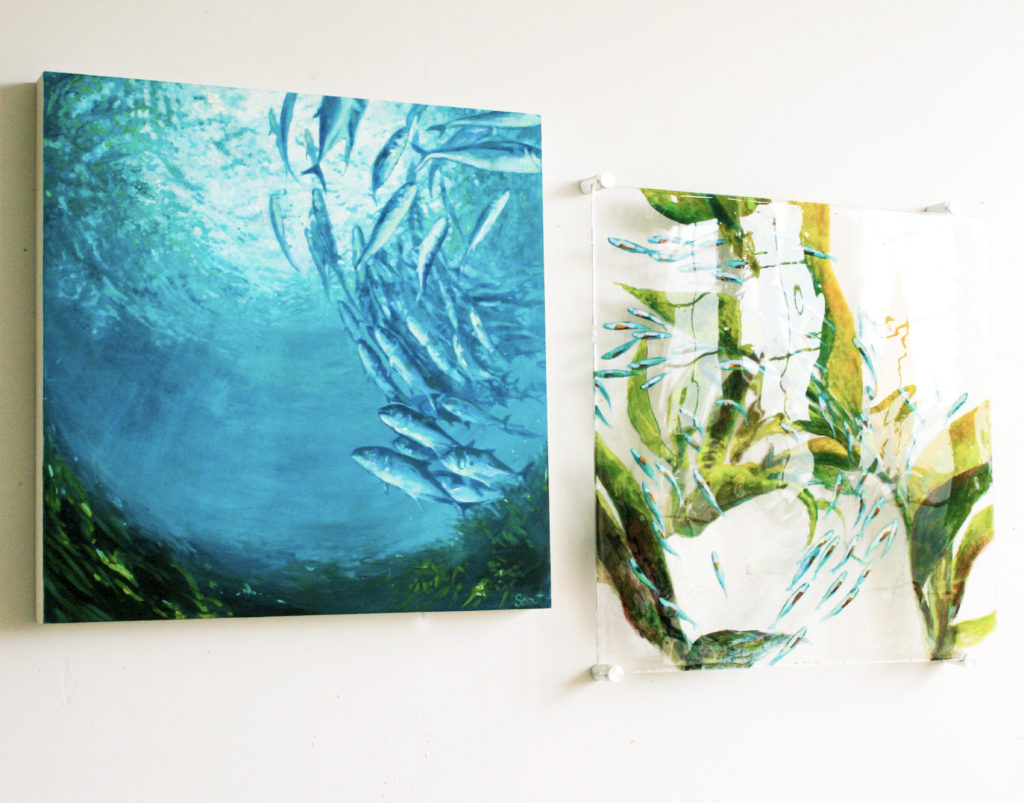 Rivers and forests, serene and idyllic.
Portraits of swimmers in neon acrylic.
Sculptures and painted glass mounted with string.
These are a few of Scout’s favorite things.

And the body of work grows larger every year. Scout Cuomo, you see, is something of a renaissance woman. She’s waited tables, apprenticed as a tattoo artist, and written essays on living with anxiety and depression. She’s worked in painting, drawing, video, and sculpture (mosaics, she says, may be next). Best of all, she’s gone full-time with her art, and the business is growing.

Cuomo spent her childhood in Texas. Now 31, she lives in Shelburne Falls and works out of a studio in the Arts & Industry building in Florence. We caught up with her for the chance to peek inside her mind, eager to see how a world of bright colors — sometimes calm, sometimes chaotic — takes such interesting shape.

Hunter Styles: You began painting as an undergrad at Smith College, right?

Scout Cuomo: Yes, but I mostly made up my own thing. My painting teacher told us that painting is dead. I thought: I’m not going into debt here so that I can get embittered about the art-making process! I wish I’d had the wherewithal to know that that was just his experience, and to find my own personal love of painting at that time. But I didn’t. That didn’t come until later.

So, I got into charcoal video animation and multimedia. Also, being able to build websites, make prints, work in Photoshop, write well — those were important skills to learn. In order to run my own business, I had to learn how to wear all the hats.

Hunter: You work in several mediums. Do you feel any pressure to consolidate what you do? Or does making art for a living provide you with the freedom to explore?

Scout: I do jump around mediums, because I just naturally want to experiment. But finances and  affordability are things you have to figure out as you go.

After a showing of paintings at The Green Bean, I wanted to get back into sculpture, so I made a bunch of unicorn heads for The Dirty Truth. The theme was: ‘happiness is a unicorn’ — if you strive for it, it’s going to elude you. That really came true for me, because that was one of the most painful processes ever. I sold some of those unicorn heads online, which helped me to recoup some of the cost, but I spent, like, $1,200 making those things. Hydrocal, silicone, oil-based clay… And I had to take a class on making molds, because I had no idea how.

But honestly, if you want to make money off your art, you’ve got to spend money. It adds adrenaline. And it makes you get real about your finances.

Hunter: Does that stress you out?

Scout: It’s the energy of taking yourself seriously. You have to value what you do.

And I got great grants this year — that really helped my business. Especially MASS MoCA’s Assets for Artists program.That’s what helped me build my new website, write a business plan, and open a business account.

Hunter: Are you full-time as an artist?

Scout: Yes, for three years now. I have commissions until the end of this year, and I make products to sell online. Then I have small shows at galleries, cafes, and places like Hope & Olive in Greenfield. I do open-studios and craft fairs. But on Etsy, I’m trying to keep it to prints and sketch paintings, because Etsy takes such large fees. Last year, for example, I made $16,000 through Etsy, but $12,000 of it went to fees.

Hunter: Are you serious?

Scout: With PayPal fees, monthly fees, and 3 percent that they take on every sale. Isn’t that crazy? It’s a double-edged sword. Being on Etsy has helped me get some international sales and commissions, and it’s helped me learn how to market myself and figure out what sells. It’s a necessary evil, to a certain extent. Then you get to a point where you can start to take the power back.

Hunter: Do you work every day?

Scout: Yes. While one thing’s drying, I go to pick up another thing.

The thing that gets in my way the most is the idea of not taking myself seriously. I risk overcommitting my time to other people. Being self-employed, it’s harder to say no when people  want to stop by the studio and just talk, or when they need a babysitter, or a ride from the airport.

I was a server for so long that I forgot how to say no — I thought that I had to do everything. It’s hard for people to get out of the mentality where they say yes to everything. But then you hit your 30s.

Hunter: You don’t seem too frayed or overworked.

Scout: For the first time in my life. It’s a big deal.

Hunter: Tell me more about your commissions. Where do they come from?

Scout: I’ve been getting commissions for six years, but this year has been the most successful. They get in touch online, or they come to open studios. One woman saw my stuff at Woodstar, so she commissioned me to do four paintings for her. Some have come from Greece, France, Italy, Great Britain, Turkey, Florida, Lake Tahoe, Nevada, Boston, here in Williamsburg; They just show up, with small stories of how they identify with the work. Isn’t that cool?

Hunter: Do these people tell you why they like your work?

Scout: It resonates with them personally. They like the light. It gives them a hopeful feeling. To me, hearing that is the best thing ever. That’s just what I want. The world feels overwhelming, and here I am, making unicorns.

Hunter: It sounds like there’s some real physical labor that goes into your art, whether it’s painting or molding unicorns.

Scout: The charcoal work is pretty intensive too, because it’s just one piece of paper that you draw on and erase as you go, like William Kentridge. I’m not necessarily booksmart, and I’m not the most organized. For me, this is all about building wisdom through work — tangible work — and really going hard at it.

As I get older, I hope to relax a little bit. But work ethic has been really important to me, for getting myself out there. To have endurance, and to feel positive about what I’m making — that it has integrity and meaning, and that it’s important and authentic.

Hunter: Do you end up creating any pieces that you don’t show people?

Hunter: What’s your social circle like, in this arts community?

Scout: I’m pretty solitary. But I love seeing what people make around here, and I do feel a connection. I just have to sift through my own ideas on my own.

I don’t have a lot of painter friends. I don’t know why. I think maybe a lot of us keep to ourselves. But there are a lot of people around here who really put themselves out there for others. It doesn’t feel cutthroat — it feels open and porous.

Hunter: Bodies of Light, your recent exhibition at Easthampton City Arts, seemed to show a palpable love of being outside.

Scout: When you’re walking around Chapel Falls in Ashfield in the fall, it feels, like, vibrational, in all the little places. It’s really cool.

Hunter: Has nature been a consistent source of inspiration to you?

Scout: I wish I could say that I’m a rugged outdoorsy lady, but I’m not. I just think it’s so peaceful to feel two forms of escape at the same time. When I’m painting, I’m internalizing an outside feeling. And it’s also just so nice to be outside — to see how colors work in the light. For me, that happens most specifically in nature, and in water.

Hunter: Is that place of creative flow the same every time? In other words, can the unicorn project take you to that feeling? Or does that sweet spot feel different for every project?

Scout: It’s different for everything. That’s why I like different mediums. For the Bodies of Light show, I wrote in my statement that art is a medicine for me. I felt my struggles with depression and anxiety were feeding the art-making process, but at the same time, painting with color in those different environments was really soothing. I wanted to be open about that in the show. I always want to be open  about that.

See more of Cuomo’s work at scoutcuomo.com. Hunter Styles can be contacted at hstyles@valleyadvocate.com.