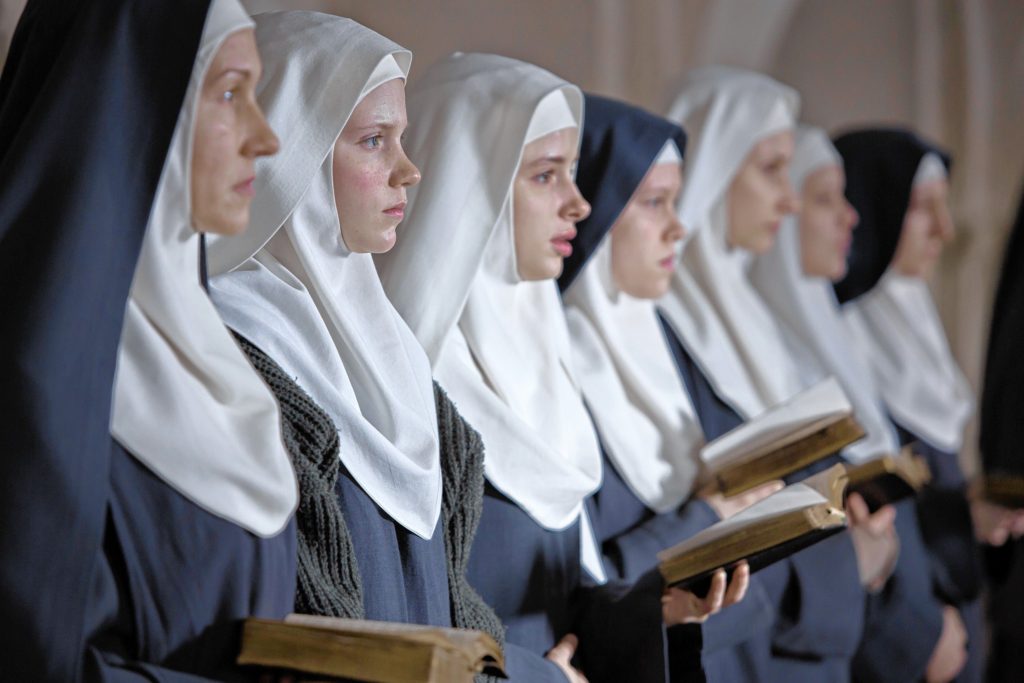 Sometimes it seems like we have always been at war. Whether on a small scale or a world stage, we as a species seem never to tire of hurting each other, and of finding inventive new ways to do it. But perhaps even more depressing than that terrible march of progress from stones to drones are those ancient horrors that are still so terribly common in our more recent conflicts.

One of those horrors is at the heart of The Innocents, director Anne Fontaine’s (Coco Before Chanel) look at a real-life tragedy that occurred at the tail end of the second World War. Now playing at Amherst Cinema, Fontaine’s film, with a script by Sabrina B. Karine and Alice Vial, presents us with a story so shocking it seems, at first, to be something out of a horror film.

It begins in the winter of 1945, in a Benedictine convent in Poland. Nuns draped in black and white move quietly through stone passageways and sing their hymns — until an awful cry of anguish pierces their devotions. It comes from one of their own, and it is an unfamiliar sound in a convent: a cry of pain brought on by the beginnings of childbirth. More surprising still, it is soon revealed that this particular nun is not the only one with child.

The full truth is revealed when one of the sisters runs off to a field hospital, where she finds French Red Cross doctor Mathilde (Lou de Laâge). After she begs for the doctor’s help, Mathilde follows the nun back to the convent, where the Reverend Mother (Agata Kulesza; recently seen in Ida) explains the terrible facts of the case: the occupying Soviet army has repeatedly entered the convent and raped the nuns, encouraged by their superiors to view it as a reward for their service.

But while the Mother is concerned for her nuns, she is also terrified of the stain on the convent’s reputation that a scandal might bring in the local community. So while she agrees, grudgingly, to have Mathilde deliver the children, she also demands secrecy, pledging to arrange for adoptions for all the children. And as Mathilde returns to the convent to deliver these babies — the soldiers descended on the convent on multiple occasions — she begins to see how the sisters come to grips, or don’t, with what has happened to them. In one tragic scene, a nun talks about how she could still be married, if only she could find her baby’s father.

It’s not often we get a war movie so intently focused on the experience of women. Refreshingly, they are not treated as a single entity — Mathilde is not simply the secular savior, and the nuns are not all wide-eyed true believers. Instead, they are individuals, each with her own history and outlook. To an outsider, they may all appear the same; to Fontaine, each woman is her own story.

Also this week: Music is on the menu at a variety of venues. At the Yiddish Book Center in Amherst, The Wandering Muse takes a look at the music of the Jewish diaspora. Tamas Wormser’s documentary follows musicians in daily life and during performance while focusing on the creativity that makes the common struggle of a musician’s life worth the trouble. And back at Amherst Cinema, two films bring music to the screen. First is The Music of Strangers, a new film from the creators of the musical documentary 20 Feet From Stardom. In this new film, directory Morgan Neville follows Yo-Yo Ma and the Silk Road Ensemble as they travel the world on a mission to find musical connections. And in Eat That Question: Frank Zappa in His Own Words, director Thorsten Schutte has gathered up a wild collection of interviews and performances, culled from the dusty archives of old TV stations, to create a unique documentary of Zappa’s life, told in the voice of the man who lived it.