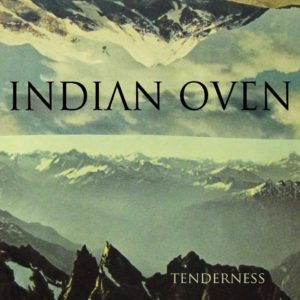 With a name like Tenderness, listeners might expect the record to be chock full of sappy love songs or gut-wrenching odes to past relationships. However, it doesn’t take long to observe that Indian Oven may have had a secondary definition of tenderness in mind when it came time to title the album – sensitivity to pain.

Opening track “Oh, His Body” cuts right to the point. Over some tuba (courtesy of Pioneer Valley musician J Witbeck) and melancholy strings (from cellist Eric Remschneider of Siamese Dream fame), a tale is told of a thin, lonely man who amidst flashes of lightning and a wounded heart is pursued by a persistent memory. It’s an intriguing character study built off images to ruminate over, and the mood is accented by churning, dirge-like music that marches almost grudgingly forward.

It gets even better on perhaps Tenderness’ best song, “Mystery Novel.” Featuring banjo and a wordless intro filled with “oohs,” the track unfolds around a repeating guitar riff in almost short story fashion. Characters include the reader of the aforementioned novel, a lost father and a mystery woman who’s “nowhere to be found.” Plus, it’s catchy to boot.

Fittingly, a host of characters contributed to the recording of Tenderness itself. Though Indian Oven’s membership consists of just Carpenter and Bazzeghin, Valley residents like Witbeck, Jamie Kent (group vocals), Alex Drenga (banjo) and Emma Cohen (vocals) amongst others, also crop up on the record.

The addition of so many players to the group’s sound lends a wider scope to the proceedings. While many songs focus on intimate subjects, the songwriting structures used consistently ebb and flow. Rhythms shift from number to number, and different musical styles meet, mutate and merge into new creations. For examples, look to the burbling country rock of “Mama Don’t Buy Me Marbles,” as well as the indie rock sing-along “Harder.”

But in the end, everything boils down to the melodies. As far as Indian Oven stretches stylistically, the band still shows a knack for hanging its songs on a particular melody or hook. To wit, one of the group’s most hummable tunes “Warm Gin” even gets a reprise as a stripped down and unlisted bonus track.

Starting today digital downloads of Tenderness are available to purchase online via iTunes and CD Baby, and physical copies of the release can be found at Turn It Up! in Northampton.