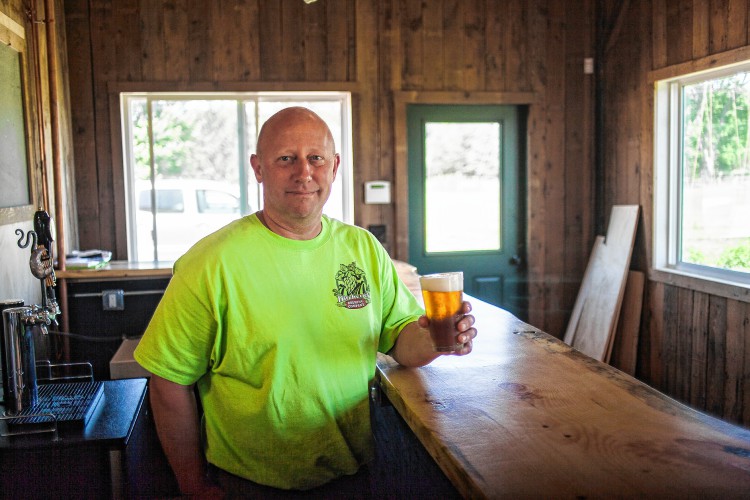 The key ingredient: locally sourced, out back

With beer lovers thirsty for experimental and fresh brews, a region that supports local agriculture, and a back-to-the-craft-beer movement sweeping New England, now is the perfect time to open a brewery in Western Massachusetts.

Hitchcock Brewing Company is the latest  to toss its recipe into the mix and make a go of making beer for discerning beer drinkers in the Pioneer Valley.

Located on Christian Lane in Whately, next to Tall Grass Alpaca Farm, a beautiful, large taproom overlooks a field where about 850 hop plants twist up into the sky.

Rich Pederson, who co-owns the beer business with his wife, Geneva Pederson, said their goal as brewers is to keep the craft of beer making first and build a brand that keeps in touch with local flavor.

“We produce local ales for local people,” he said. “We want to make beer that people want to drink, and (isn’t) necessarily the hottest thing on the market.”

The brand certainly does just that, offering a pale ale, golden ale and a pretty tasty IPA, sourced using hops from the field behind the brewery.

Inside the future tasting room, which is currently under construction, morning sunlight spills in through large windows and the scent of new wood is almost as strong as the aroma of fermenting beer.

The name “Hitchcock” was inspired by Edward Hitchcock, who was born in Deerfield in 1793 and became the first state geologist for Mass. and third president of Amherst College. He developed theories about how the Pioneer Valley was formed, and why it’s so fertile — which ties into making beer and sourcing local agriculture.

The new brewery shipped its first keg May 15. Since then, Pederson explained, they’ve been able to get their beer into several popular restaurants and bars around western Massachusetts including Amy’s Place, Fitzwilly’s, The Deck, Tavern on the Hill, Yard Tavern, Deerfield Inn and Champney’s.

He said Franklin County is a great place for emerging beer brands to make a start, because the craft beer business is rapidly expanding.

“What we’re seeing up in Vermont, we’re seeing here,” said Pederson, about the expansion of the beer industry in the region — one of the reasons why they decided to settle in Franklin County. The couple grew up in the Pioneer Valley and have lived in Southampton, Westhampton and, for about five years, near Stowe, Vt.

After retiring, the couple moved back into the area in 2013 and bought the Whately property.

Hitchcock Brewing Co. blossomed from the Pedersons’ love for making beer and farming. Rich Pederson, former chief information officer for National Life Group in Vermont, started brewing in his basement back in the mid-’80s.

“I’ve always wanted to open a brewery,” he said. “My wife and I both did an early retirement and decided to chase a dream.”

Geneva Pederson, who worked as a nurse practitioner before she retired, said she was interested in the idea of starting a brewery because she wanted to return to and farm the land.

“The farming piece is what entices me,” she said, adding that, combined with her husband’s love for making beer, the business has been a success. “The two pieces work really well together.”

As far as where the brewery is heading, Rich Pederson said he intends to infuse locally produced fruit and agriculture in the beers, and experiment with hyper-locally produced concoctions.