Cinemadope: A Queen and Her Kings 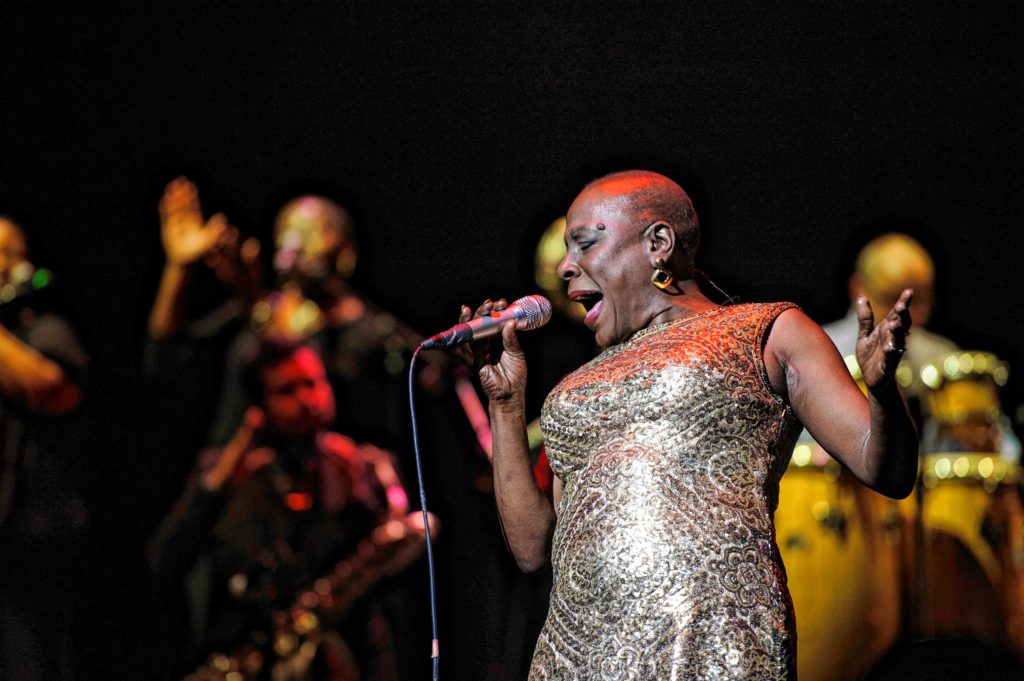 Sharon Jones and the Dap-Kings kick off their delayed 2014 tour at the Beacon Theater in New York. Jacob Blickenstaff Photo.

A musician’s life is never easy. I’m not talking about those of us who pick up the guitar now and then, or even the many who, long after it becomes clear that they will likely not move beyond the coffee house or bar circuit, still pack up the Volvo to head out for a weekend gig. I’m thinking instead of those people for whom performance is a necessity — people who from early on have been driven to sing, dance, blow a horn, or beat a drum. These are the people who have it hard so often, and for so long. But they are also the people who might as well quit breathing as quit the band.

Sharon Jones is one of these people. The powerful singer, who made a name for herself with her breakthrough work with the Brooklyn based R&B band the Dap-Kings, is such an infectious and enthusiastic performer that it’s easy to assume that she has always found quick success. The truth, as told in Oscar winner Barbara Kopple’s new documentary Miss Sharon Jones! — due to open at Amherst Cinema this week — is that it has been anything but. Yet Jones, who turned 60 this year, and who in the last few years has battled pancreatic cancer, has not only persevered — she has remained vital, even as the disease has begun to rear its head again.

For Jones, talent was never the issue (to give a sense of the raw power of her stage presence, consider that she is most often compared to the dervish that was James Brown). Instead, her career seemed destined for the shadows because the industry decided that she was, in her own words, “too fat, too black, too short, and too old.” She got by, working as a corrections officer and a wedding singer. But word spread among people who cared about music, and as the years rolled by, her following grew ever larger. By the time she hooked up with the Dap-Kings, she was ready for that “overnight” breakthrough. It was just before the release of their much-awaited 2013 album Give the People What They Want that the cancer diagnosis hit.

Kopple’s film — the director has previously made documentaries following the personal and professional lives of Woody Allen and The Dixie Chicks, among others — follows the aftermath of that news, as Jones undergoes treatment and attempts to make her way back to her natural environment: the stage. For someone like her, there seems no better medicine.

Also this week, director Penelope Spheeris’ The Decline of Western Civilization — a classic look at the punk rock era — screens at Amherst Cinema on Thursday Sept. 1 at 7 p.m. The punk movement is often minimized as a fashion statement, but in Spheeris’ film it is given its due, through interviews with fans, critics, and club owners. For the full effect, get there in time for the introduction from professor Steve Waksman, ethnomusicology department chair at Amherst College, and stay late for the after-screening punk record party at High Horse following the screening.

And finally this week, a musical tradition continues at South Hadley’s Tower Theaters, where on the first Saturday of every month the cinema hosts a midnight screening of The Rocky Horror Picture Show. Jim Sharman’s 1975 musical/comedy/horror stars Tim Curry as crazed doctor Frank N. Furter, a mad scientist holed up in a large mansion and visited by an innocent young couple (Barry Bostwick and Susan Sarandon) whose car has broken down in a rain storm. The scene at the mansion — which includes transvestitism, cabaret, and cannibalism — might be just enough fun to corrupt the pair.

Of course, much (or most?) of the joy of seeing Rocky Horror comes from the audience interaction with the film, and Tower screens it with a live shadow cast courtesy of The Come Again Players, who play out the onscreen action for live audiences. Get in on the action yourself by wearing a Rocky Horror costume, and you’ll get in for half price. Note: no one under 17 will be admitted, so bring that photo ID.