Review: Not My Mother’s Kitchen, a cookbook by Rob Chirico 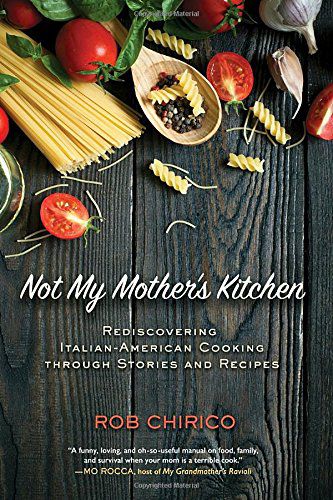 In the world of food, there is nothing more contentious than “traditional” Italian cooking — everyone with an ounce of olive oil in their veins thinks their family recipes are Old World classics.

This is, in part, because Italian nonni rarely write down how to prepare their dishes — as if it is assumed Italians are born with an innate ability to make a proper risotto.

There is no definitive way to make a particular Italian dish — or Italian-American dish — there’s just your family’s way. This is Rob Chirico’s refreshing approach to classical Italian cooking in his new memoir/cookbook Not My Mother’s Kitchen. Chirico, who lives in Western Mass, has been working in kitchens and perfecting his talents ever since he was a boy — and he needed a way to defend himself against his mother’s truly terrible cooking (his words, not mine).      Chirico’s anecdotes about growing up in a diverse section of Queens and spending time in the kitchen with his nonna and the his friends’ mothers are a fun narrative that runs throughout the recipe guide, which also includes historical notes about food. He’s deft with descriptions and bringing the reader into his world: “I sometimes look back and wonder if my passion for good food was born out of self-defense: a defense against malformed, nearly cremated hamburgers; frozen and canned vegetables overcooked to the point that you could practically use straw to ingest them; and, of course, so-called Italian food that was about as authentic as UFOs and Elvis sightings. Cacio e Pepe and Raw Summer Puttanesca were a long way off.”

And how about those entrees that Chirico would spend years perfecting?

The recipes in Not My Mother’s Kitchen are a nice blend of nonni-style Italian cooking and the modern American take on Mediterranean rustic cuisine. The instructions are simple and clear and Chirico doesn’t overcomplicate his dishes with too many ingredients or finicky prep. There are many recipes in this book for people who want to cook Italian food on a weeknight. Have a napkin handy when you’re reading recipes for Gorgonzola Sauce, Spicy Raw Tomato Sauce with Garlic and Basil, Timpano, Bistecca alla Fiorentina, Fried Zucchini Slices, Raw Summer Puttanesca, and Carbonara — your mouth will water.

As someone who takes pride in her Italian heritage, I don’t agree with all of Chirico’s recipes. In his pasta dough, for example, Chirico uses only eggs and semolina. Most Italians will agree, or concede, that this is the traditional way to make pasta, but it’s not the best way. A blend of semolina and flour with a pinch of salt, a drizzle of olive oil and eggs produces the tastiest — and easiest to work with — dough.

Being able to disagree with recipes and debate their merit is, of course, a hallmark of any decent Italian cookbook. And Chirico’s Not My Mother’s Kitchen is sure to spark these conversations — and produce food that will satisfy even the most traditional Italian tastebuds.