At Amherst Cinema: An actor dives into a reporter’s death 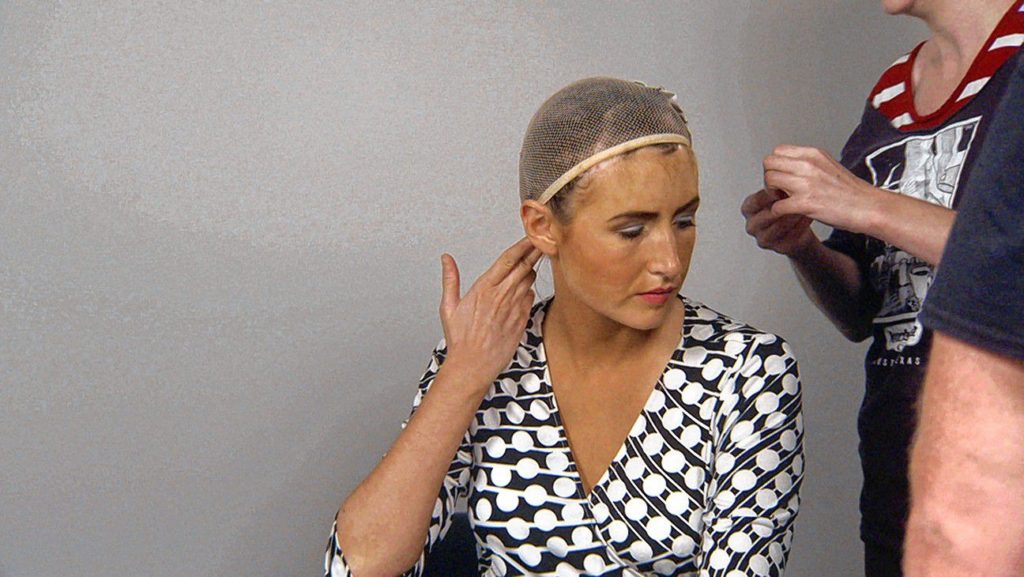 There’s a famous scene in Network, Sidney Lumet’s 1976 film about the state of the television industry, in which veteran newsman Howard Beale (Peter Finch), bitter about his impending dismissal in the face of declining ratings, announces to his audience that instead of fading away he will go out with a bang – by killing himself on air in an upcoming broadcast. It doesn’t quite happen that way in the film (without Beale continuing on, we wouldn’t have the memorable “I’m mad as hell” diatribe), but the scene does have a sad precursor in the real world.

It happened in 1974, close to the time when screenwriter Paddy Chayefsky was working on the Network script (some sources say it happened before he wrote the scene; others place it as an eerie echo that came afterward). It was in July of that year that Christine Chubbuck, a 29-year-old television news reporter, went on air one morning and read a few story capsules, including one about a shooting at a local eatery. When the film for that segment wouldn’t run due to a technical issue, the camera turned back to Chubbuck, who told viewers that “in keeping with Channel 40’s policy of bringing you the latest in ‘blood and guts,’ and in living color, you are going to see another first — an attempted suicide.” With that, she drew a loaded revolver from behind the anchor’s desk, placed it behind her right ear, and squeezed the trigger.

In his new film Kate Plays Christine, director Robert Greene (who will be appearing in person at Amherst Cinema’s 7 p.m. screening on Thursday Sept. 8) looks at the life of Christine Chubbuck through the lens of Kate Lyn Sheil, a present-day actress who is cast to portray the reporter in a “stylized, cheap ’70s soap opera” take on the tragedy. In her quest to give Christine a portrayal that owes as much to her life as her death, Kate travels to Sarasota to dig deeper into the everyday mysteries that could drive someone to take their own life in such a public fashion.

But what happens then is not only about Christine — it becomes also about Kate, and about the sometimes exhibitionist nature of acting, and the ways in which the two women’s histories collide and coincide, and the ways in which so many people attempt to define the lives of women — what makes those lives meaningful, what makes them successful, and so on — in today’s world.

Also this week: Taking taxis at night has always reminded me of going to the movies. You’re alone, but you’re not; it’s dark, but there’s light flitting by. This weekend, the two come together when Shelburne Falls’ Pothole Pictures screens Jim Jarmusch’s comic, downbeat film Night on Earth on Friday and Saturday nights at 7:30 p.m. A collection of vignettes — five taxicab stories spread out over some of the planet’s biggest cities — it reminds us that even the smallest, shortest encounters can be bursting with something more. The Frost Heaves and Hales provide live music before the show each night.

And at Cinemark theaters around the region, the sort-of-cult classic Labyrinth returns to screens for a two-day 30th anniversary event. Starring a young Jennifer Connelly as the big sister who loses her brother to the Goblin King (a deliciously cast David Bowie), the film — which features a cast formed largely by puppets born of Jim Henson’s Creature Shop — is a classic for anyone of the generation lucky enough to be born into it. See it Monday and Wednesday in Hadley, West Springfield, or Enfield.

And finally this week: a farewell to Gene Wilder, whose death made the news as I was writing this column, and whose combination of tenderness and unhinged possibility made him such a memorable part of my youth and young adulthood. From The Electric Company to Blazing Saddles, from Willy Wonka to Young Frankenstein to his work with Richard Pryor, Wilder never failed to open my eyes to some bit of absurdity that made being human make a little bit more sense.