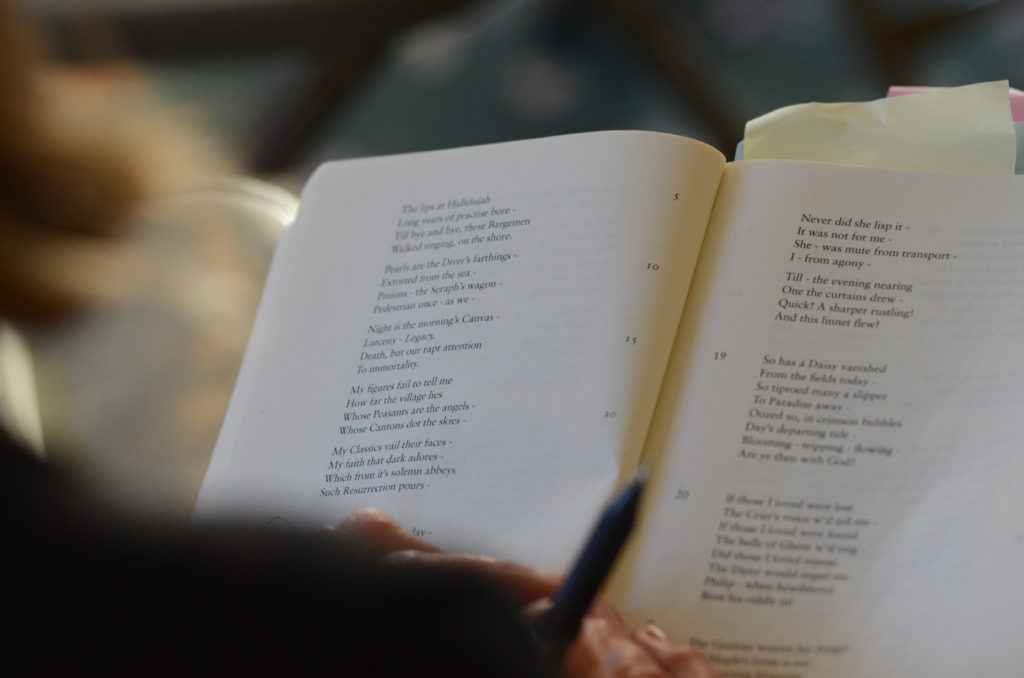 We Kindly Stop For Emily

If “poetry is everywhere; it just needs editing,” as the late, great James Tate once asserted, then we’ll never run low on good fodder for verse. What we do risk losing, from time to time, is our appreciation and respect for the eternal, alchemical art of writing poems in the first place.

Thankfully, the Amherst Poetry Festival and Emily Dickinson Poetry Marathon are going strong, and their return this year brings new events as well, including a heartfelt tribute to Tate — who passed away last summer — and something called “Poemkémon,” which we think involves running around catching stray poems (gotta read ’em all!) Also very cool this year: the first-ever Emily Dickinson Poetry Slam, hosted by Northampton Poetry and featuring four of the best slam teams in the Northeast. Winners go home with cash prizes and baked goods based on Emily Dickinson’s recipes.

Whether you want to challenge yourself at the one-day reading of all 1,789 of Dickinson’s poems, try out an outdoor open mic at night, do a craft project with your kiddos on the Common, or chill at Dickinson’s grave, Emily’s gathered fans and (very) extended family are here to help grease the wheels and keep the words flowing.

The Festival — which is produced by the Emily Dickinson Museum, the Amherst BID, Jones Library, and The Common — runs Sept. 15-17. For the full schedule of events, all of which take place in Amherst, visit emilydickinsonmuseum.org.

In the meantime, take the next few pages to enjoy some of the Advocate’s selected works by eight of our favorite poets featured at the fest. Many of them are local, and all, we think, are onto something special.

(Neonatal Intensive Care Unit, Bay State Hospital, Springfield)
We stand here
for the required two minutes
washing our hands
as a pile of still frame futures
scatter and whiten in the bath.
This is home now,
this occupied country.
And so the water holds us.
There are signs that insist
you must leave if you are coughing, feverish.
There are signs reminding nurses,
social workers to wash and
wash again every twenty minutes.
What the signs don’t say
but what we’ve learned
sitting each night in chairs rocking
with their brass plaques naming the tiny dead
is that these nightly rituals
of getting clean have nothing to do
with what we could bring in
and everything to do
with what we need to leave behind.
— Adam Grabowski

the cats still in the dark outside your house, at the beach
we let the sand chap our bodies
into something not our bodies and you drew
lines over my skin with the crooked edges of shells
and we forgot your fingers on my spine in the night—
your father is a man turned to stone
and one of these days we will find him rocked over
on the very same porch step but this time
his eyes won’t open again, or they will be open
and unblinking, shards of broken
vodka bottle blue and a half whispered
promise, the touch that we tried to forget
— Brynne Rebele Henry

Even grafted limbs sigh
when the rains come.
The hands, those twin divining rods,
may tremble in the presence
of an old love. Now they’re the arms
of a veteran. The hair that grows
from the arms a different shade.
Since the transplant he writes left handed.
He waits for the hands to reveal
their previous life as farmer or electrician.
By a piano he pauses to see
if the wrists rise to the music.
If the knuckles love the baseball.
If the fist curls in anger. Before:
did he drum his fingers on the desk?
Was the salute quite so crisp?
On its own, the pinky angles to the teacup.
It’s the giver of these arms speaking
whenever he debones a fish or juggles.
Every time a tennis ball comes down
it sits in the palm for a moment,
then rises again.
— Karen Skolfield

To The Gods of Baking

I bake cakes and cookies and pies,
and all manner of pastry
I brew jam in pots,
stew chili in crocks.
Build loaves out of only flour —
water — sugar — yeast — and salt.
Bread, that is just fine without butter.
Bread, that actually makes people smile,
roll their eyes back in their heads-
And devour it, before it has time to cool.
But really —
I bake cakes.
Layers carved, textures of flavor tucked in
fillings with names like toasted, and curd,
and ganache.
And of course, everyone’s favorite, the frosting-
frosting born of butter and sugar and eggs.
Swiss buttercream is the closest thing
I know to ritual,
to prayer.

Eight egg whites,
meticulously separated into my mixer bowl.
Said mixer bowl is settled over water at a
simmer,
double boiler fashion.
Sugar is added —
whisk administers friction until
no granule remains.
Bowl is transferred to the god of mixers,
my stainless steel KitchenAid.
And then butter is given in offering.
Added tablespoon by tablespoon,
until a half pound of fat is sloshing around with
the whites of eggs, now meringues.
See, no matter how many times I do this-
how many cakes I frost-
with this heaven-laced sugar —
When I watch this primordial soup
cause waves in my mixer,
I am sure I have failed.

But the thing about buttercream,
is you may not give up.
So thus, buttercream is the last
thing on Earth I pray over.
Because damnit, there is a
half pound of butter,
and eight egg in this bowl.
And I am too broke,
and have made promises to two sons,
to lick two beaters.

So, God of Pasty,
who I beg of good weather when baking,
make this work —
But, the miracle is at hand,
as the chemistry happens.
Protein molecules whisked into submission,

let go —
Allow sugars to bond —
so that soup,
Becomes perfectly crafted
viscous dreams,
spreadable for those carved layers of cake.
Because the thing is,
Chemistry,
is really just Latin
for Hope
— Tara Jean Bernier

I am rolled up and hidden —
A song you already knew
plays in your mind
you can’t quite remember
the words but they are
on the tip of your tongue.
The streets of your home town
were the sidewalks cobbled
or concrete? Did you jump
the cracks? Was the big tree
in front or in back of the school?
What was her name, the girl
you knew in kindergarten?
You used to knock down
the boys’ block towers together
until they let you build them
and you all became friends.
Unroll me, I am a memory.
— Lori Desrosiers

The small door
above the first floor door
opens onto a balcony two stories above
the bakery below.
The wrought iron railing
is now red, painted overnight,
and kudzu vines have been draped
over the metal and anchored in water filled
coffee cups.
She has threaded and strung hundreds
of dulled Crayola crayons which
hang in lines and click together
in the breeze almost as solidly as chalk.
Two pairs of bronzed antlers have been
screwed into the floorboards, and
The corresponding hooves run
the perimeter like floodlights.
Over and over throughout the day
she has gone in and out,
nearly every time returning
with something new,
but now and then just basking
in the cool June sun or
staring at the traffic and the people
on the downtown streets
and sidewalks below.
Is it willful rebellion,
or did the landlord forget
To pass along the rules
before renting the third floor apartment to a
second year art student?
Whatever the case, she’s kissed that security
Deposit goodbye.
— Michael Medeiros